Detail of an ad for post-chaise service from the "Jeffersonian Republican," June 3. 1847

Old newspaper articles and clippings are a great source of information for family research. Sometimes these have been saved in scrapbooks preserved in the Hagenbuch Archives. Other times, they are discovered using online research tools such as Newspapers.com. Though not as rich in details as articles, newspaper advertisements and classifieds can reveal more facets of our Hagenbuch family history. 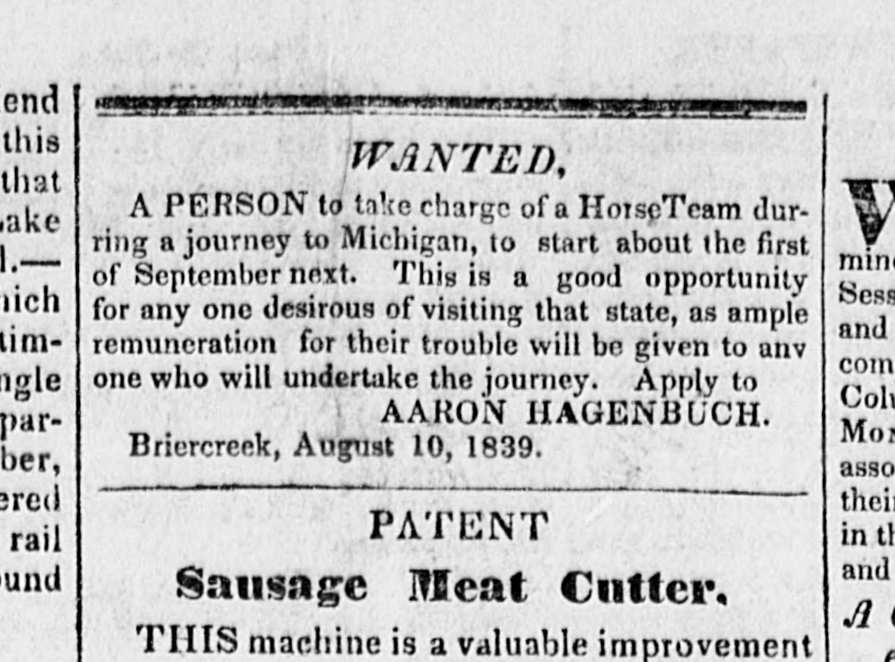 The first example is a wanted ad placed in The Columbia Democrat on August 10, 1839. In it, Aaron Hagenbuch of Briarcreek, Pennsylvania is looking to hire someone to drive a horse team to Michigan. During the westward migration of the 1800s, it was common for settlers to pay a teamster to manage the animals that pulled a wagon. The advertisement also reveals that Aaron Hagenbuch and his wife, Rachel (Hill), headed to Michigan in September of 1839. We know that they eventually settled near Three Rivers in St. Joseph County. Aaron’s line is: Andreas (b. 1715) > Michael (b. 1746) > Andrew (b. 1785) > Aaron (b. 1810). 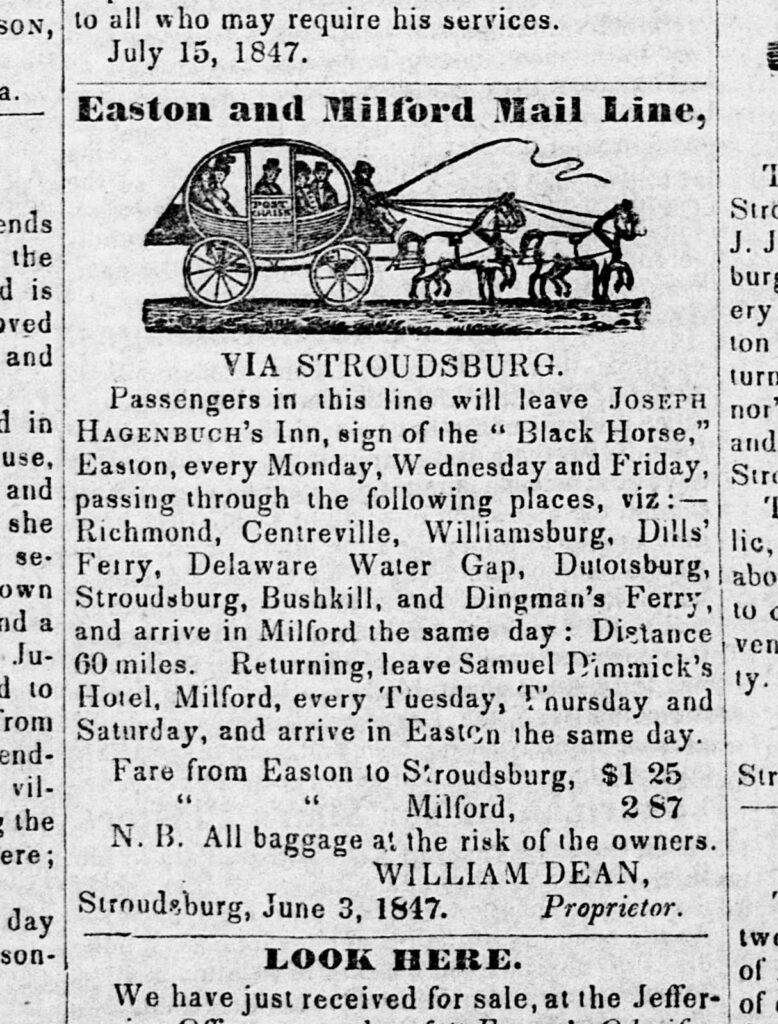 Ad for post-chaise service from the “Jeffersonian Republican,” June 3, 1847

A previous article on this site examined the family of Joseph Hagenbuch (b. 1795) and how he ran a tavern in Easton, Pennsylvania. The above advertisement from June 3, 1847 in the Jeffersonian Republican promotes a post-chaise service from Easton to Milford, which traveled a 60 mile route along the Delaware River. Post-chaises were similar to stagecoaches, though they were usually owned and operated by innkeepers. The transport is described as leaving the Black Horse—Joseph Hagenbuch’s inn in Easton. Joseph would later expand the old tavern into the United States Hotel. His line is: Andreas (b. 1715) > Christian (b. 1747) > Joseph (b. 1795). 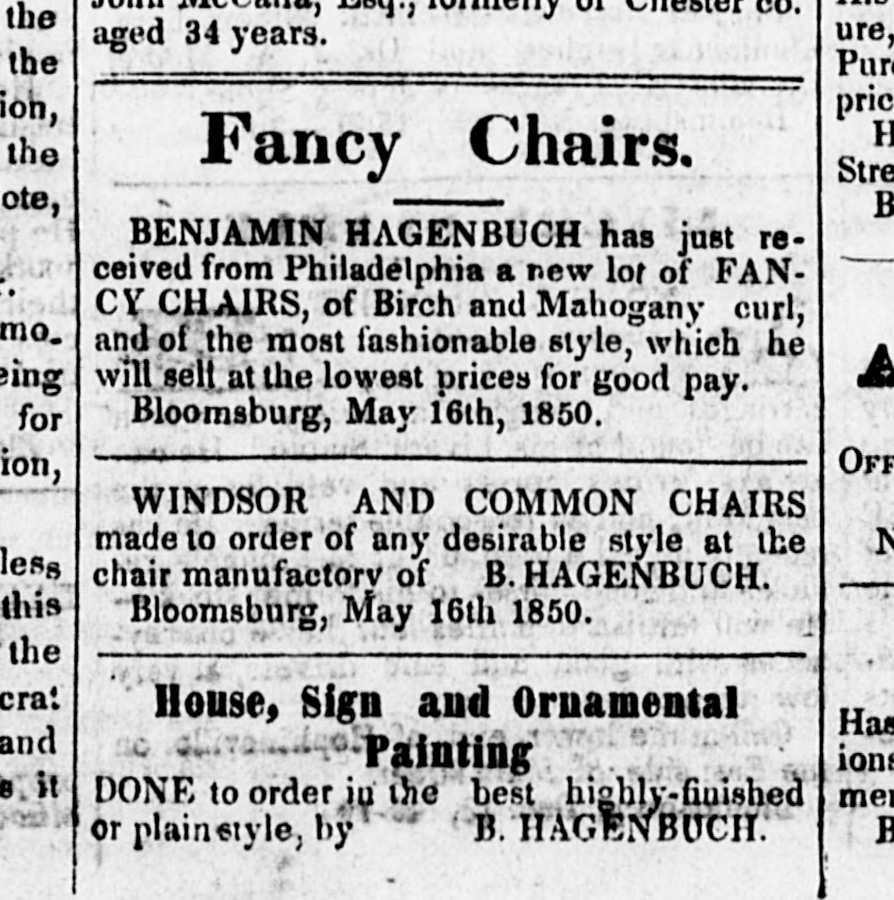 Ads for Benjamin Hagenbuch’s chairs and painting services from “The Star of the North,” May 16, 1850

From the ads he placed in The Star of the North on May 16, 1850, Benjamin Hagenbuch (b. 1818) appears to have run several businesses in Bloomsburg, PA. One of these sold furniture: fancy chairs made of birch and mahogany, as well as chairs in common and Windsor designs. Another provided painting services for homes and signs. Benjamin and his wife, Larina (Thornton), eventually moved to Iowa. Their son, Eli Thornton Hagenbuch, has been featured in a number of articles. Benjamin’s line is Andreas (b. 1715) > Christian (b. 1747) > John (b. 1785) > Benjamin (b. 1818). 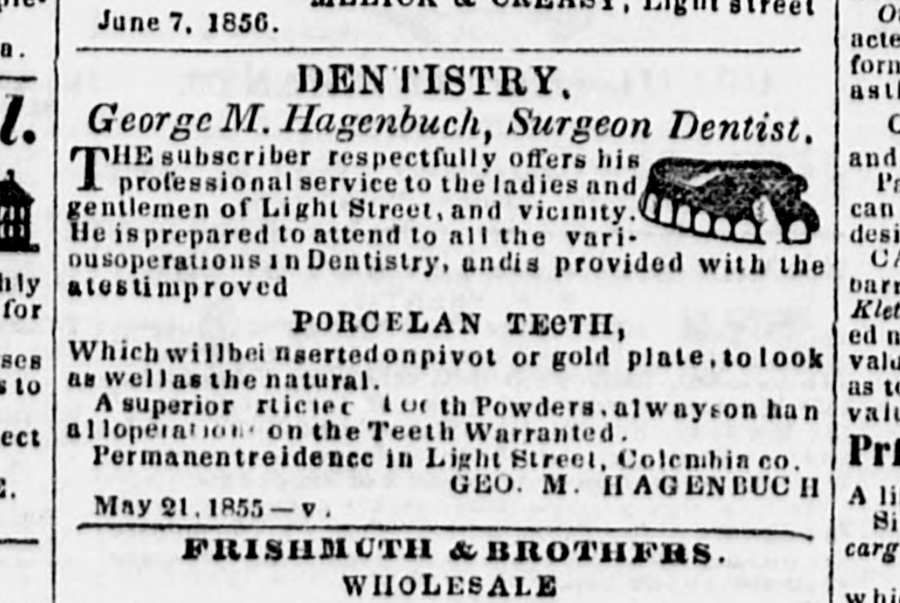 Ad for George M. Hagenbuch’s dentistry from “The Columbia Democrat,” May 21, 1855

This advertisement, which includes a graphic of dentures, ran in The Columbia Democrat on May 21, 1855 and touts the dentistry services of George M. Hagenbuch (b. 1826). George appears to have exited dentistry and went on to run a drugstore, first in Lightstreet, PA and later in Williamsport. A medicine bottle from his pharmacy was the focus of the article series, The Privy Bottle: Part 1 and Part 2. George’s line is: Andreas (b. 1715) > John (b. 1763) > Simon (b. 1788) > George Miller (b. 1826). 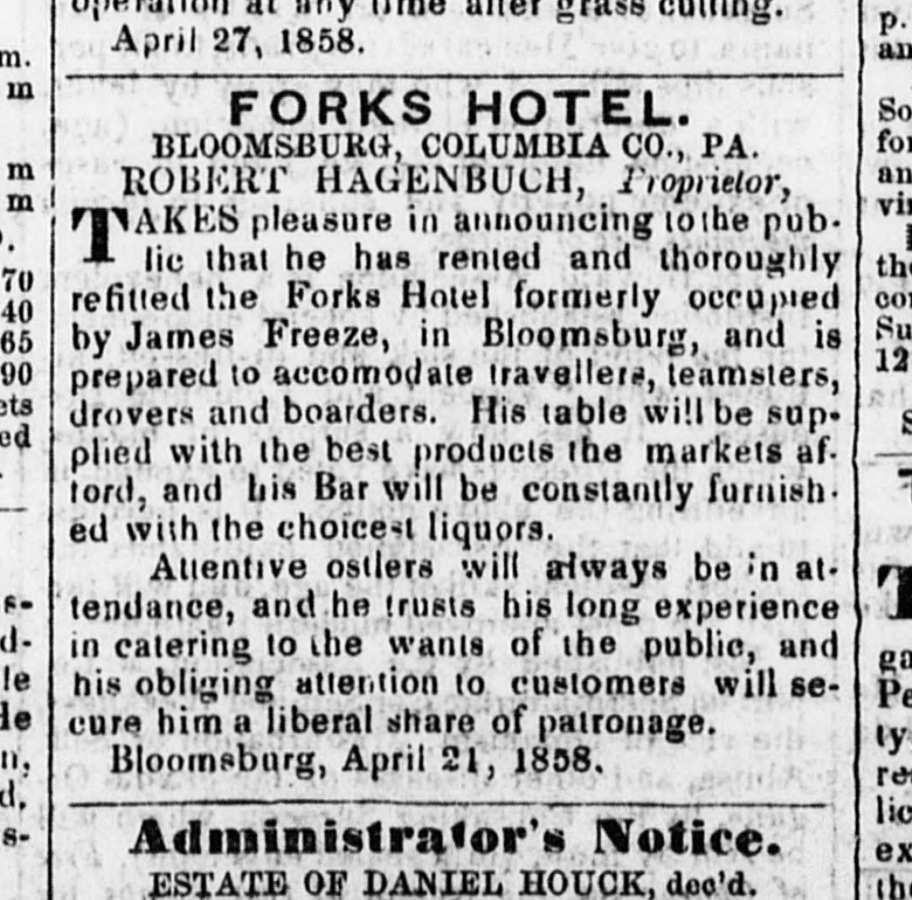 In 1858, Benjamin Hagenbuch’s older brother, Robert (b. 1808), rented the Forks Hotel in Bloomsburg and renovated it. For several years, he placed ads for his business in The Star of the North, such as this one from April 21, 1858. Robert’s line is: Andreas (b. 1715) > Christian (b. 1747) > John (b. 1785) > Robert (b. 1808). The Forks Hotel has an interesting family connection. It was built and first operated by Daniel Snyder (b. 1783) who, as previous mentioned in the article “Family Politics,” ran for the Pennsylvania House of Representatives in the 1840s. Daniel was married to Mary Magdalena Mickley (b. 1792). She was the niece of Maria Magdalena (Mickley) Hagenbuch (b. 1778), who was the wife of Joseph Hagenbuch (b. 1778). Family and business relationships like these played an important role in the early history of Bloomsburg and Columbia County, Pennsylvania. 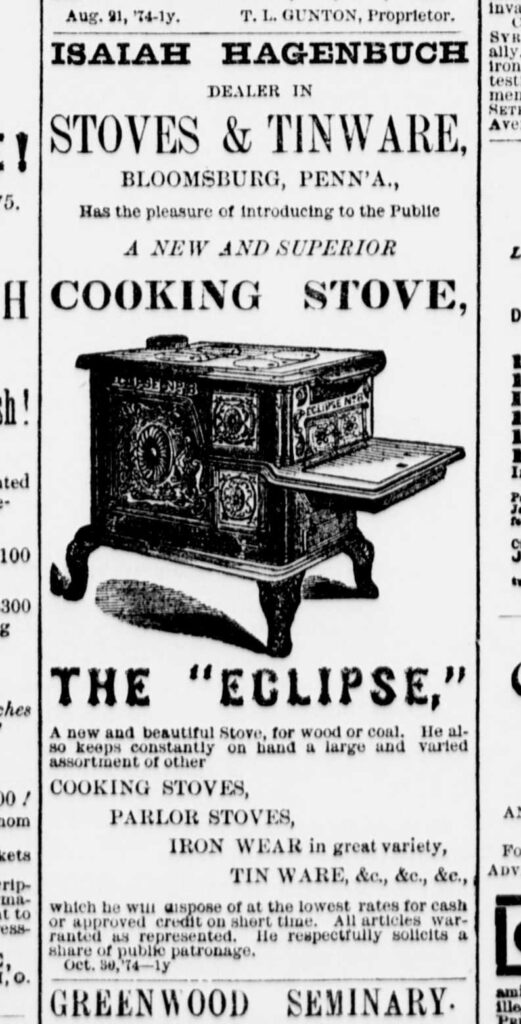 Ad for Isaiah Hagenbuch’s stoves and tinware in “The Columbian,” October 30, 1874

Just like newspaper articles, advertisements and classifieds can reveal unique details about our family members, their professions, and their lives. They also provide a way to connect people to different places, time periods, and events. Of course, the story told by any specific research source is incomplete. However, when layered together these sources help us to weave together a more complete picture of our Hagenbuch family history.