Detail of a page from Kathryn (Hagenbuch) Roat's book

As I’ve mentioned before, I’m in possession of many historical items that belonged to the Hagenbuchs and other related families. Andrew and I continue to collect items. These include: a privy bottle, a fraktur, postcards, many photos, diaries, and all sorts of other items. We cherish these items which we call the “Hagenbuch Archives,” and we always accept any items that relatives or others wish to be preserved but have no interested parties to pass them on to.

One of the items I have is a composition book which belonged to my great aunt, Kathryn “Katie” (Hagenbuch) Roat. The earliest date that can be found in the composition book is 1892 when Aunt Katie was thirteen years old. It is her school book with several pages devoted to spelling words, definitions, and arithmetic problems. The outside of the book, certainly written in Aunt Katie’s writing, are the words “Kathryn Book” (sic). 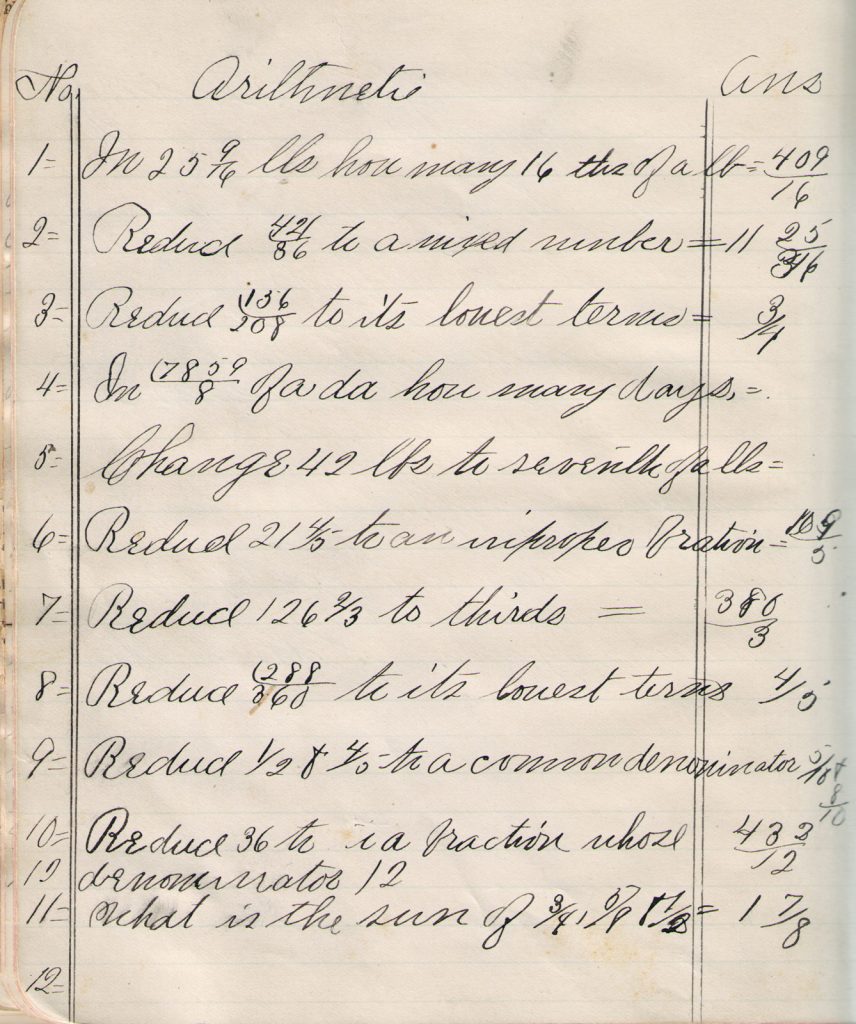 But, most of the book is filled with newspaper clippings pasted over top of many of the pages that Kathryn Hagenbuch had written her school work on. The newspaper clippings from the late 1800s and early 1900s were preserved on the pages by my first cousin, a grand niece of Kathryn, namely Carol Robb. She did this work in 1971, as the inscription in the back of the book reads:

Carol is now Carol Dunbar. Her husband is Peter, and they live in New Hampshire. I recently called Carol. During our conversation, I asked if she remembered pasting the clippings in the book and who suggested she do that. She has no recollection of it, but the handwriting of the inscription from 1971 indicates that it was her mother, Florence (Hagenbuch) Robb, who wanted the clippings pasted in the book. In an effort to preserve the clippings, most of 13 year old Kathryn Hagenbuch’s schoolwork was covered. Fortunately, enough survives to give us a window into the life of this young girl who would soon go through much heartache with the loss of her father and brother in 1897 to typhoid fever and the loss of the family home in 1898.

Aunt Katie’s anguish at the loss of father, Hiram, and brother, Henry Bruce, is quickly realized upon opening her composition book. The clippings that Carol was instructed to paste on the first pages of the book relate the story of the untimely deaths of Hiram, 50 years old, and his son, Henry Bruce, aged 22. The words in the news clipping tell the story, with sadness and regret: “[T]hey have left a legacy to the world of manhood, fidelity, and peace that will continue to shine out brighter and brighter as years go by…” 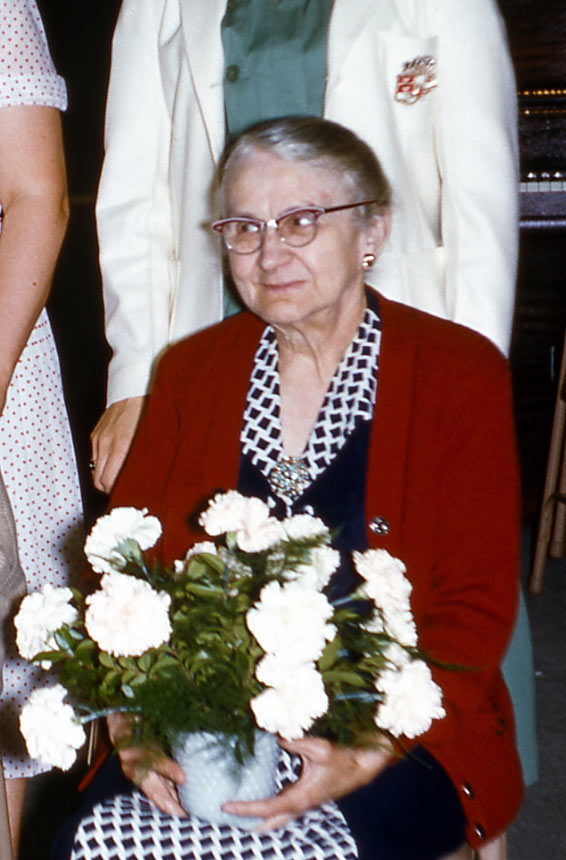 On one hand, I am disappointed that most of Aunt Katie’s school work in this book has been covered by newspaper clippings. But on the other, at least the clippings, which include important writings about our family, have been preserved, instead of being stashed away in a drawer where they might have dried out and fallen to pieces.

Along with five news articles on the deaths of Hiram and Henry Bruce are four articles on the 1913 death of another son of Hiram’s (and brother to Aunt Katie), Eugene Hagenbuch. Other treasures are obituaries for three more siblings of Aunt Katie: Joseph William (b. 1873, d. 1880), Mary Ann (b. 1892, d. 1896), and Franklin (b. 1890, d. 1930). Even more obituaries of relatives and friends are found pasted in the book as well.

In addition, there are news articles about weddings and surprise parties for friends of Aunt Katie. No date is listed on these clippings, but they list the attendees, a who’s who of those living in the Milton area during the early 1900s. 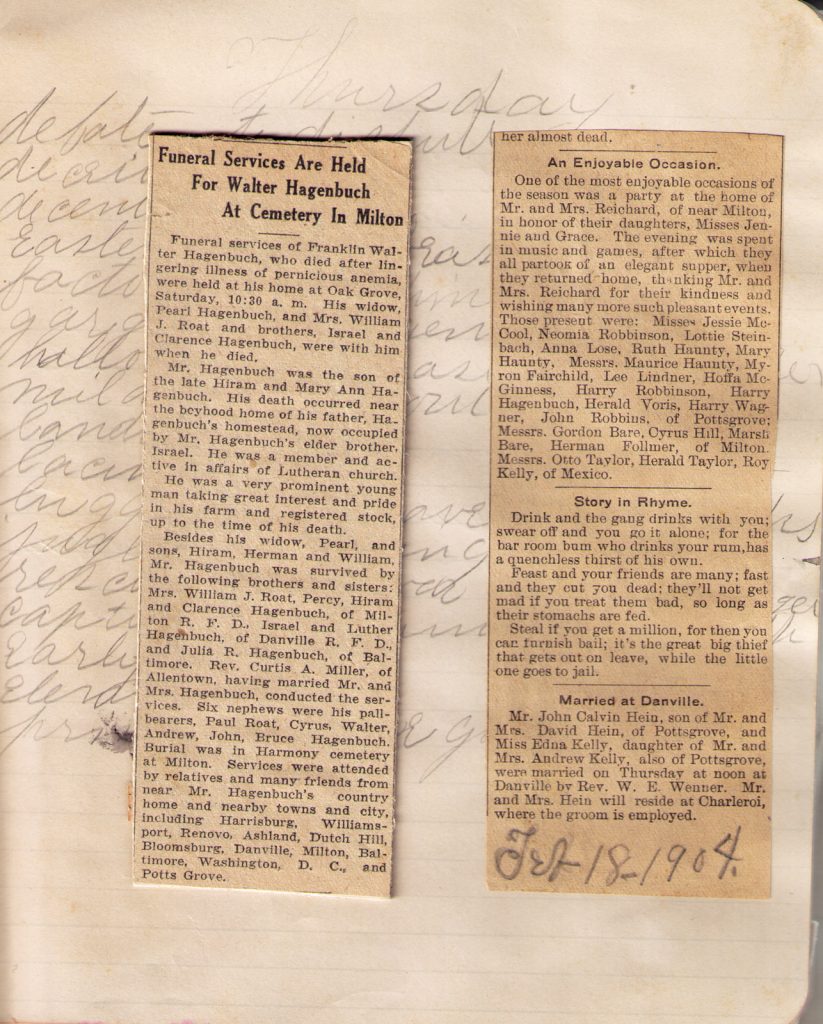 Yet, the bulk of the news articles pasted in Kathryn’s book are obituaries. Not just relatives like her grandmother, Rebecca (Muffley) Hagenbuch, and her grandfather, Israel Lindner, but neighbors and friends like Elizabeth Boyer, William Kemmere, Mrs. J. D. Hartzell, and Mrs. John Geist. All of these people have been immortalized by having their names and lives remembered in a composition book once owned by a 13 year old girl named Kathryn Hagenbuch.

Yes, it is a bit of a disappointment that more of my great Aunt Katie’s school work has not been preserved. However, this is overshadowed by the enjoyment we now have of news articles from long ago that can be genealogically researched. I appreciate the foresight of Aunt Florence for understanding the importance of preserving these and for the work of my cousin, Carol, back in 1971.