Headline from an article in "The Columbia Democrat," September 28, 1839

Like many Americans, politics has been on my mind recently. This led me to wonder: How did our Hagenbuch ancestors participate in the politics of their time?

After a bit of digging, I stumbled upon a full-page article from September 28, 1839 that mentioned the names of several Hagenbuchs. It began with the following headline:

People’s Candidate,
In favor of REMOVAL and EQUAL RIGHTS,
Opposed to a division of the County, and the annexation of
Point and Rush townships to this County,
OPPOSED TO THE POOR HOUSE,
And to an increase of Banks and Incorporations.
For Representative,
DANIEL SNYDER

The article appeared on page two of The Columbia Democrat—a paper started by John Ingram in Bloomsburg, Columbia County, Pennsylvania in 1837. Ingram’s goal was to provide a Democratic foil to the Columbia County Register, which was a local Whig paper run by Leonard Rupert and Thomas Painter. Prior to the 1850s, the United States had two major political parties, the Democrats and the Whigs.

According to the article, on September 23rd a “large, democratic meeting” had been held at the house of John Hess in Briar Creek to determine “what measures ought to be taken in relation to the manner in which the voice of the people was defeated at the county convention.”

The paper went on to describe the outcome of the meeting and the committee’s findings. It mentions that the men will support Daniel Snyder as the Democratic candidate for Columbia County to the Pennsylvania House of Representatives in the upcoming election. It details his position on a number of issues and the reasons why he is the best person to represent the county. 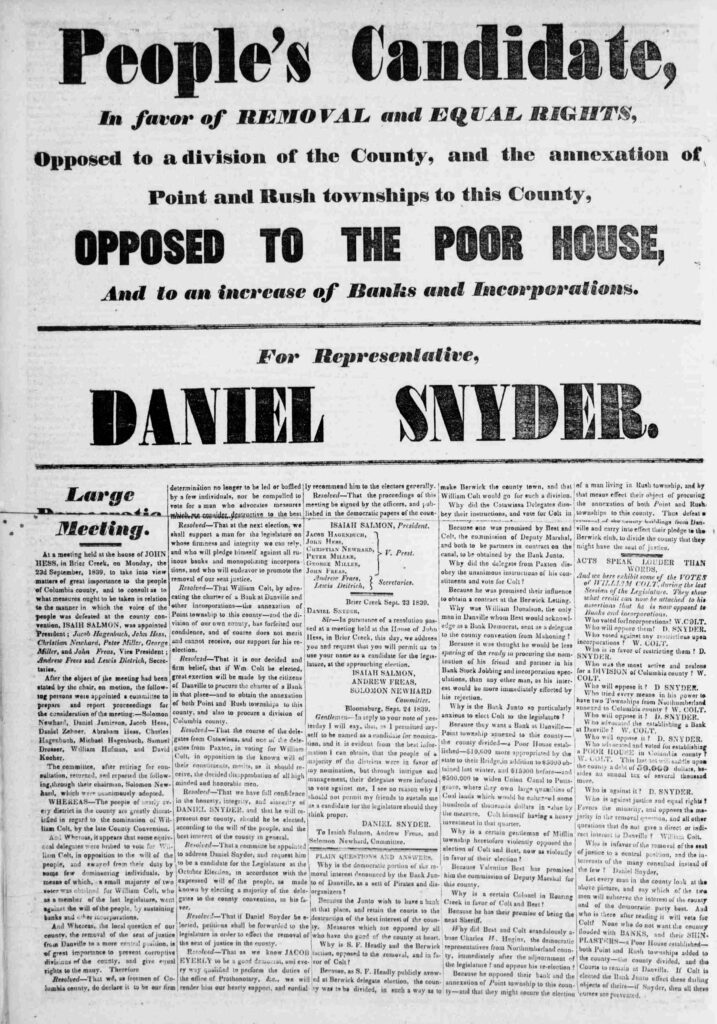 At first glance, the article appeared to be primarily about the nomination of Daniel Snyder. Yet, upon closer investigation, a number of interesting details were revealed. First, there were the Hagenbuchs mentioned. All three are believed to have been the sons of John Hagenbuch (b. 1763): Jacob (b. 1792), Michael (b. 1799), and Charles (b. 1811). Their father, John, was the youngest son of Andreas (b. 1715), and John moved his family to Columbia County in the early 1800s. The sons owned farms near Hidlay Church, though by 1850 Charles had moved west to Turbot Township in Northumberland County.

Next, there was the curious reason for the meeting, which was described in the article as follows:

The people of nearly every district in the county are greatly dissatisfied in regard to the nomination of William Colt by the late County Convention. It appears that some equivocal delegates were bribed to vote for William Colt, in opposition to the will of the people, and swayed from their duty by some few domineering individuals, by means of which a small majority of two voters was obtained for William Colt, who as a member of the last legislature went against the will of the people by sustaining banks and incorporations.

It appears that while Democrats in Columbia County had voted for the nomination of Daniel Snyder as their candidate, two delegates did not fulfill their promise to vote according their districts at the County Convention. This act gave William Colt, the incumbent, the nomination. Angered by this, Democrats from Columbia County held a meeting to ensure Daniel Snyder would be on the ballot in the 1840 general election.

Snyder appears to have had several positions that distinguished him from Colt. For instance, Snyder stood “in favor of removal and equal rights.” In the context of 19th-century Columbia County politics, “removal” refers to moving the county seat to a new location. Originally, Columbia County’s seat of justice was Danville. However, this location was inconvenient, requiring some people to travel over 30 miles (a several day trip) to visit the courthouse. Snyder supported moving the county seat further east to a more centralized location, ensuring equal access for residents in the county.

Daniel Snyder also opposed several more of William Colt’s positions. One involved annexing Point and Rush Townships from Northumberland County to make them part of Columbia County, as well as dividing the county in two. While another sought to fund the construction of a poor house for the destitute. 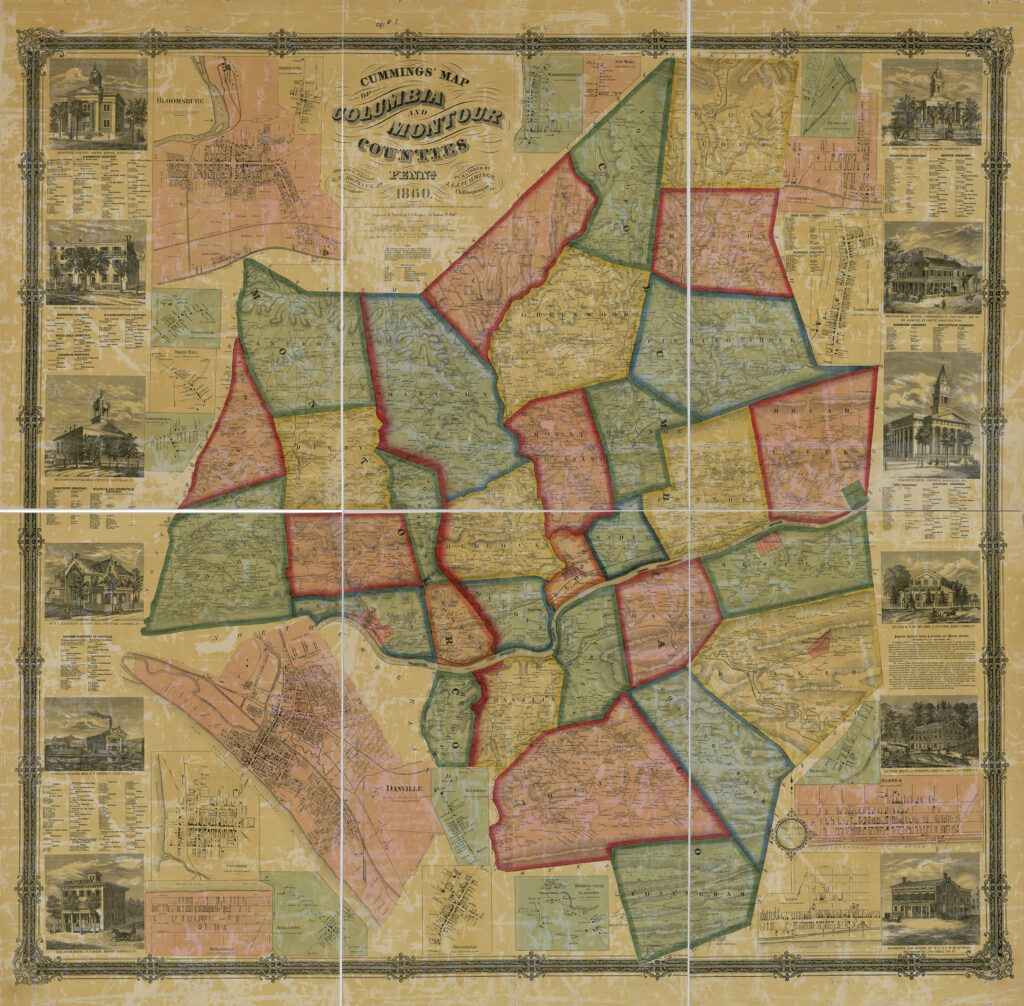 1860 map showing the area that used to be all of Columbia County, until the western townships split to form Montour County. The thick red line separates Montour (left side) from Columbia (right side).

Colt supported adding more “incorporations” (the big businesses of the time) and banks, while Snyder did not. Like others in the county, Snyder worried about the impact of large corporations on farmers and businesses in the area. He shared their concerns that new banks would flood the local economy with shinplasters—worthless money—and defraud people.

What was the outcome of this political fight? It appears that the Democratic nomination was eventually given to Daniel Snyder, as research show that he ran against John Lessig, presumably the Whig candidate, in the election of 1840. Snyder won by a large margin and served two terms in the Pennsylvania House.

He appears to have kept some of his promises and worked to prevent the annexation of Point and Rush Townships. Also, after years of debate, in 1847 the county seat was relocated from Danville to Bloomsburg. Although things did not go as planned, and the residents who preferred Danville fought to divide the county. In 1850, Montour County was formed from the western townships of Columbia County and Danville become the new county’s seat.

Looking back at the politics of the early 1800s, the issues can appear quaint. However, just like present-day Americans, our ancestors felt passionately about these and for good reason. When Columbia County was divided, so too was the family in that area. For many decades, the Montour and Columbia County Hagenbuchs hardly knew they were related. Today, we know otherwise and realize that they share the same roots on our family tree.