Detail of a map showing westward migrations of Hagenbuchs during the 1830s. Credit: Google Maps

The first part in this article series followed 300 years of family history from 1500 to 1800, as our Hagenbuch ancestors moved first from Switzerland to Germany and then to America. One line of our family, established by Andreas Hagenbuch (b. 1715), put down roots in Pennsylvania in 1737. In time, his descendants would branch to more areas of Pennsylvania, as well as push westward to other states.

A number of sources were used to research these migrations, including letters, deeds, and census records. When no definitive date was found, though a relocation is known to have happened, an estimated year has been provided. This is often the case when using the United States census, which is only conducted every 10 years. The census can show approximately when a family moved from one place to another. However, it fails to note the specific year this occurred. 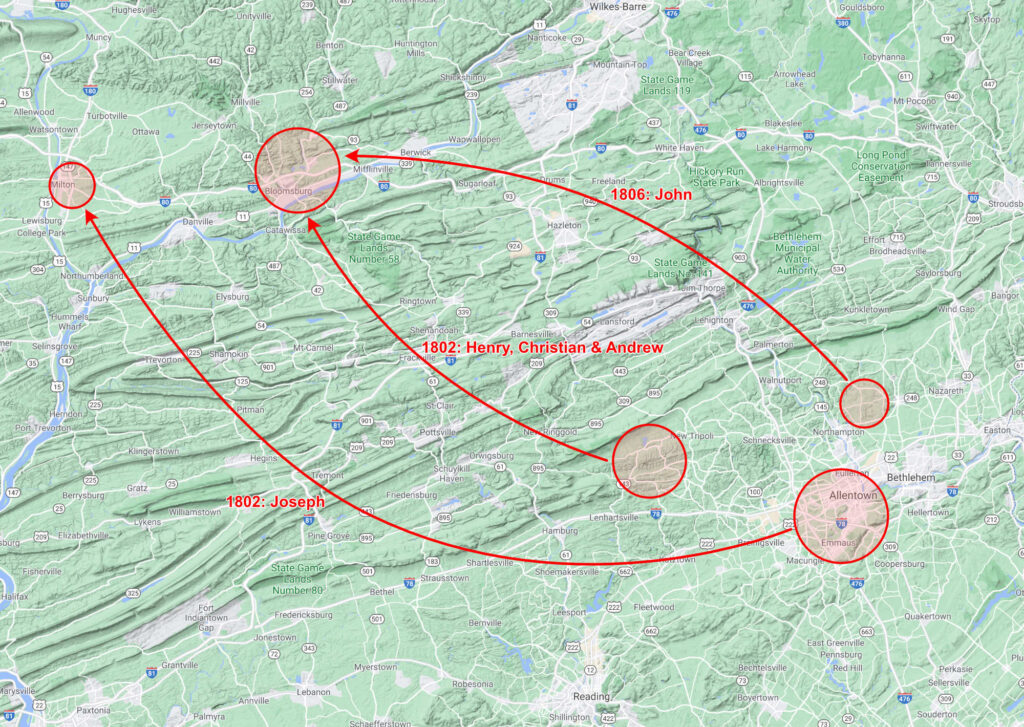 Migrations to Columbia and Northumberland counties in the early 1800s. Credit: Google Maps

By 1800, Andreas Hagenbuch’s family had spread out from Berks County, Pennsylvania to the neighboring counties of Lehigh and Northampton. Now, as new lands opened in northern Pennsylvania, second and third generation Hagenbuchs began to migrate there.

The first to leave was Henry (b. 1772). In 1800, he was living in Lehigh County not far from the Hagenbuch Homestead—now owned by his father, Michael (b. 1746). In 1802, Henry bought 519 acres of land in Bloom Township, Columbia County, Pennsylvania and moved north. His first cousin, Joseph (b. 1778), left the Allentown area and also went north in 1802. He purchased land in Turbot Township, Northumberland County, PA, west of his cousin.

Around 1805, two more of Michael’s sons, Christian (b. 1770) and Andrew (b. 1785), moved to Columbia County, likely to seek their fortunes nearer to their brother, Henry. Research shows that their father, Michael, acquired 256 acres of land in Columbia County around this time, though he never occupied it. Was it simply land speculation or did one of his sons move onto the land? Further investigation is needed. Finally, in 1806 John (b. 1763), the youngest son of Andreas, left Northampton County and relocated his large family to Columbia County.

For these Hagenbuchs, the fertile lands along the north and west branches of the Susquehanna River were desirable places to settle. Even so, a few chose to go elsewhere. One of these was Andreas’ daughter, Anna Elizabeth (Hagenbuch) Reichelderfer (b. 1754), who migrated with her husband and children to Pickaway County, Ohio in 1806. 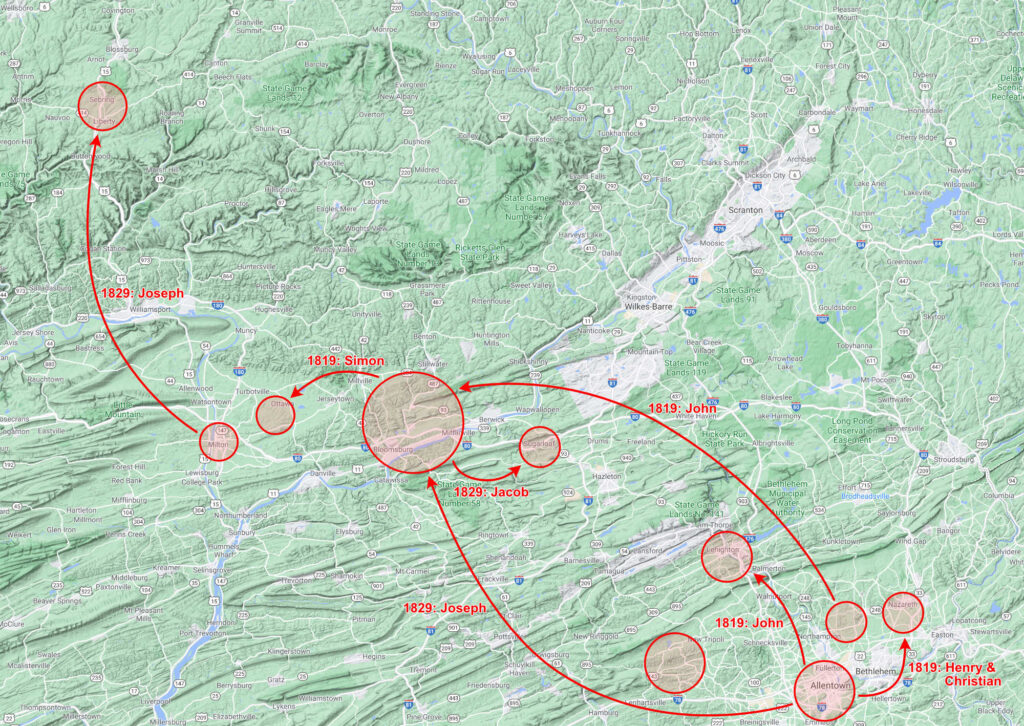 Between the years 1810 and 1830, while new generations of Hagenbuchs were starting their own families, most remained relatively close to home. Yet, several did travel a bit further. Simon (b. 1788), a son of John (b. 1763), moved his family from Columbia County to neighboring Northumberland County, though he did return to Columbia County by 1830. John (b. 1785), one of Christian’s (b. 1747) sons, moved from Northampton County to Columbia County around 1819.

About the same time, two of Henry’s (b. 1736) sons, Henry Jr. (b. 1785) and Christian (b. 1773), left the Allentown area and relocated their growing families to Nazareth in Northampton County. Another of Henry’s son’s, John (b. 1776), moved his family to Lehighton in Carbon County, PA—a place of growing commercial importance along the Lehigh River.

Around 1829, Joseph (b. 1778) decided to leave Turbot Township, Northumberland County and, along with several of his sons, resettled in Liberty Township, Tioga County, PA. His nephew, also named Joseph (b. 1799), moved his young family from the Allentown area to Columbia County, joining the many Hagenbuchs living there. Now descendants from all of Andreas’ sons, Henry, Michael, Christian, and John, were living in Columbia County, making it an important epicenter of family activity.

This also creates confusion when working to untangle family lines. For example, on the 1830 United States census a “Jacob Hagenbaugh” appears in Sugarloaf Township, Luzerne County, PA. It is known that some of Christian’s (b. 1770) sons used this spelling of the name and moved to Luzerne County. However, he is not believed to have had a son named Jacob. More research into this mystery is still needed.

Westward migrations of Hagenbuchs to Ohio, Michigan, and Indiana during the 1830s. Credit: Google Maps

By the 1830s, new states, such as Indiana and Michigan, had been admitted to the Union and the competition for land in the East was becoming intense. While many Hagenbuchs remained in Pennsylvania, like Reuben (b. 1803) who moved from Columbia County to Fairmount Township, Luzerne County around 1839, others traveled west to seek their fortunes.

Letters, sent between family members, reveal that the price of land was a crucial factor in driving westward migration. Many of our ancestors made a living as farmers, requiring plenty of acreage and fresh water. Contemporary events also played a role in their decisions. For instance, the Panic of 1837 devastated the American economy and pushed many to see new opportunities in the West.

In 1835 Stephen (b. 1803), who was the grandson of Henry (b. 1736), migrated from Northampton County to Bath Township, Greene County, Ohio. Stephen’s brothers and his father, Christian (b. 1773), then followed him to Ohio around 1839. They established numerous family lines near Dayton, Ohio. About the same time, another group of Hagenbuchs—Christian (b. 1770) and his son, Caleb (b. 1810)—left Columbia County and migrated to Sharon Township, Media County, OH. The families of both of these Christians were featured in a previous article.

Similarly, Aaron (b. 1810), a grandson of Michael (b. 1746), left Pennsylvania with his family in 1839. As discussed recently, he set out from Columbia County and settled near Three Rivers, St. Joseph County, Michigan. The state of Michigan had only been admitted to the Union two years prior in 1837.

Between the years 1800 and 1840, the number of Hagenbuchs living in Pennsylvania exploded, as our ancestors married, started new families, and had children. The growth in population, along with economic troubles, eventually pushed some in our family to move north and then west. A future article in this series will explore more of our ancestors’ movements, tracing their steps all the way to the Pacific Ocean.