A Deitschy Day in PA

The deepest roots of our Hagenbuch family tree stretch into Switzerland and Germany. However, for those Hagenbuchs living in the United States, it is an oversimplification to refer to ourselves only as Swiss-German. After all, when our family immigrated to the Americas in 1737, we became part of another culture, one that still resonates with many of us today. This culture is that of the Pennsylvania Dutch or Deitsch.

Over the years my father, Mark, and I have written several articles describing the unique places, customs, and foods of the Pennsylvania Deitsch. These help to connect us with our ancestors and breathe life into their stories. One fact cannot be emphasized enough: while rooted in Germanic traditions, the Pennsylvania Deitsch evolved into a distinct group of people, one that is less European and more uniquely American. 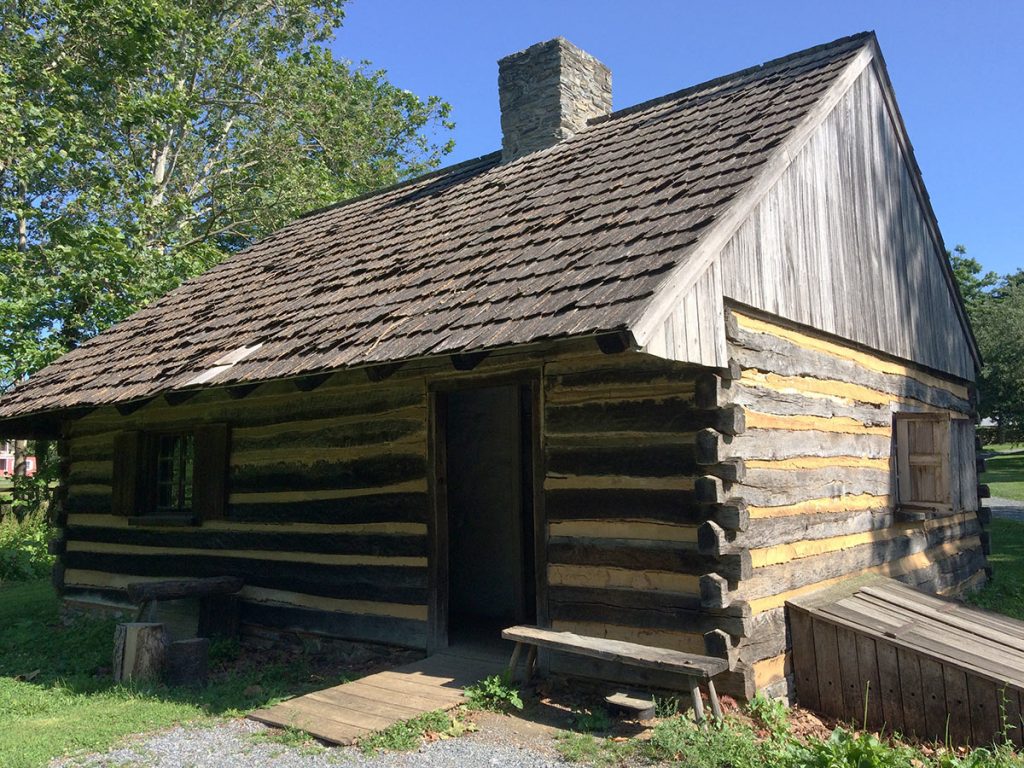 A log home with a central chimney as found at the Landis Valley Museum.

With this in mind, my father and I joined Chris Witmer—an expert in all things Deitsch—on a day trip through the heart of Pennsylvania’s Deitsch country. Our first stop was at the Landis Valley Museum in Lancaster County. Here, we toured a reconstruction of an 18th century log house, similar to what may have been built by Andreas Hagenbuch (b. 1715) after he acquired land in Albany Township, Berks County, PA. 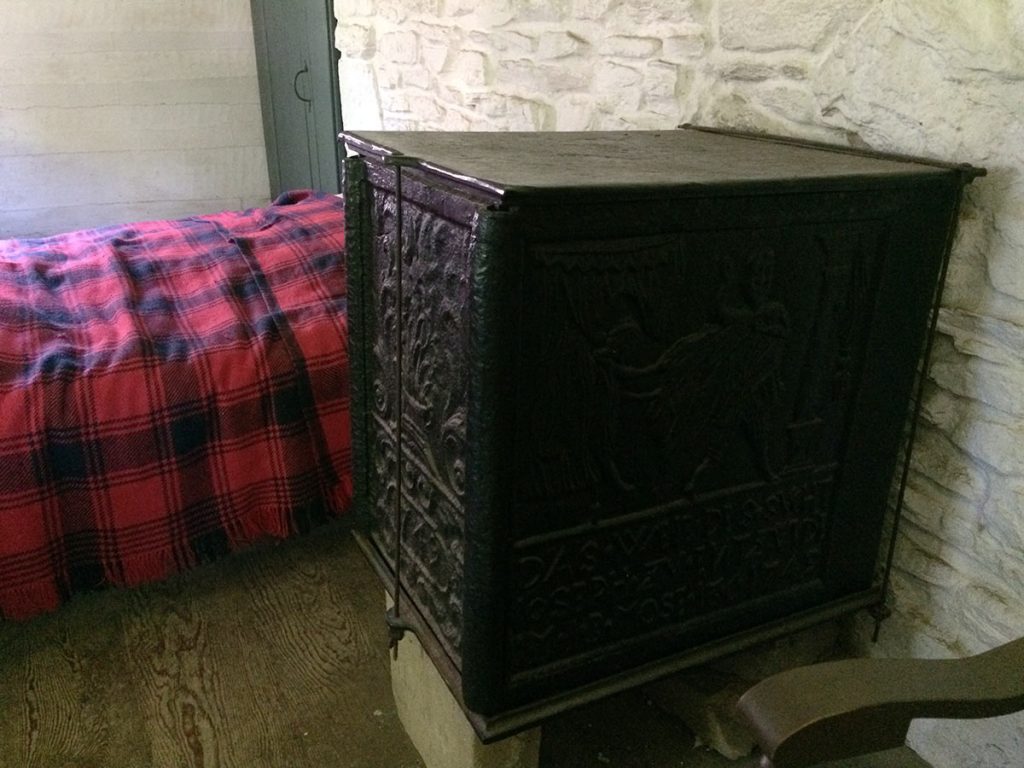 A five plate stove is connected to the back side of the central chimney and is fed through the hearth on the other side.

Two features of the home are uniquely Deitsch. The first is the central chimney, which more easily enables two adjoining rooms to be heated. The second is the use of a five plate stove. In the log house, one room had an open hearth for heat and cooking, while the other room contained the five plate stove. As Chris explained, this was attached to the back wall of the hearth and could be fed hot coals through the open hearth. 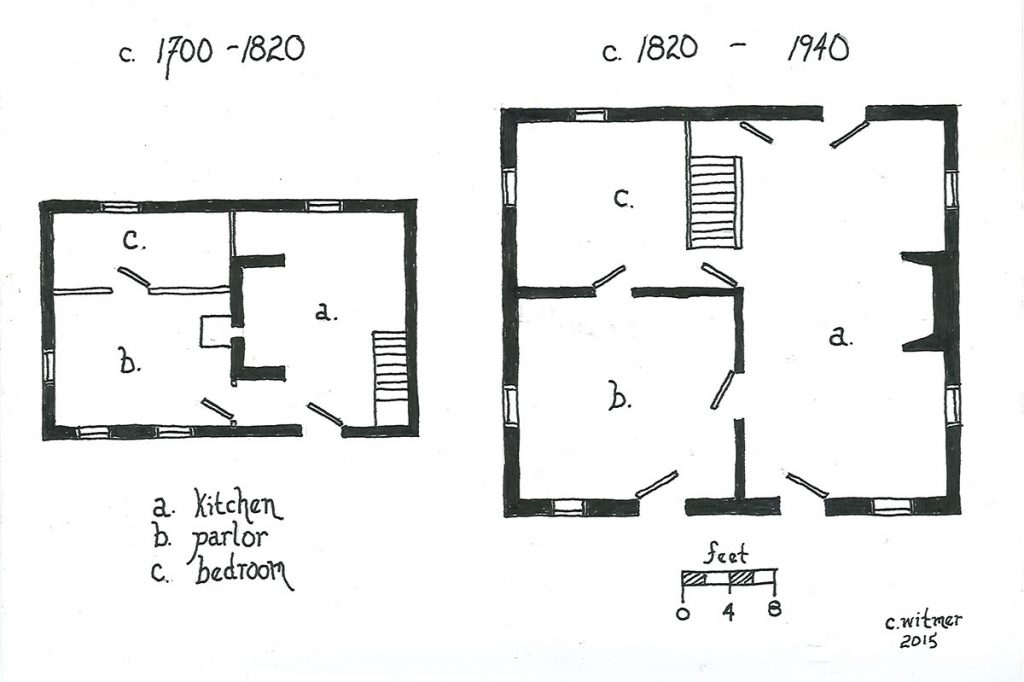 Two types of Pennsylvania Deitsch floor plans. The one of the left is similar to the log house at Landis Valley with a hearth in room A and a stove in room B. Credit: Chris Witmer

Upon entering the log home, my father and I were struck by how similar it was in size and design to the first floor of the one house at the Hagenbuch Homestead. Though this building lacks a central chimney, Chris confirmed that many central chimneys were removed during the 19th century and replaced by stoves and chimneys along exterior walls. Indeed, this is exactly what has been observed at the Hagenbuch Homestead. 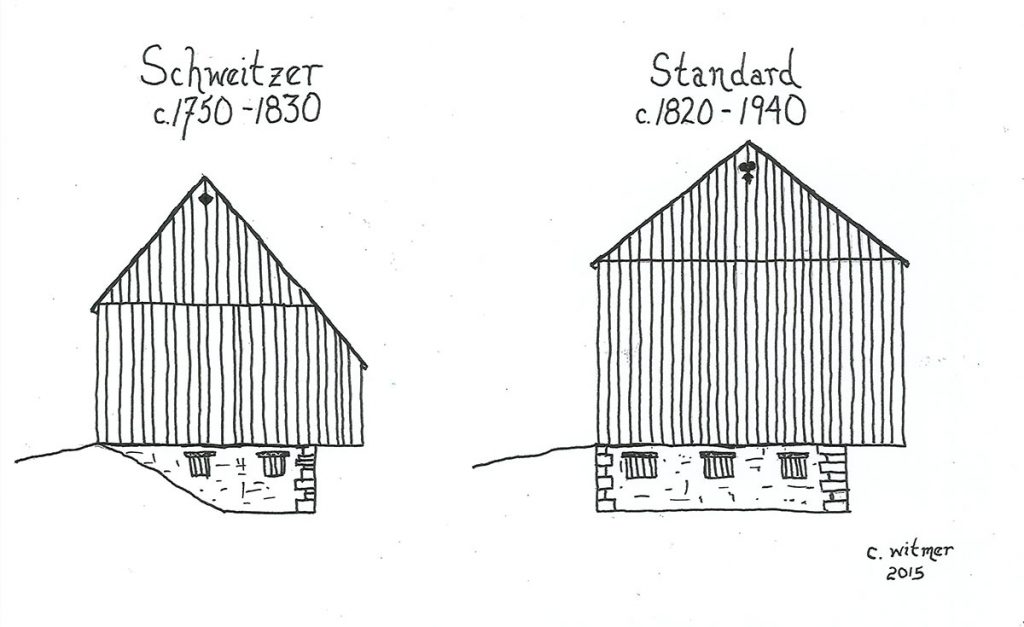 The Landis Valley Museum also has several barns on the property, sparking a discussion about the various styles of banked barns built by the Deitsch. Chris noted that two most common types are the Schweitzer and the Standard, of which the Schweitzer is the earlier style. Not surprisingly, a Schweitzer barn has been located within the boundaries of the Hagenbuch Homestead. 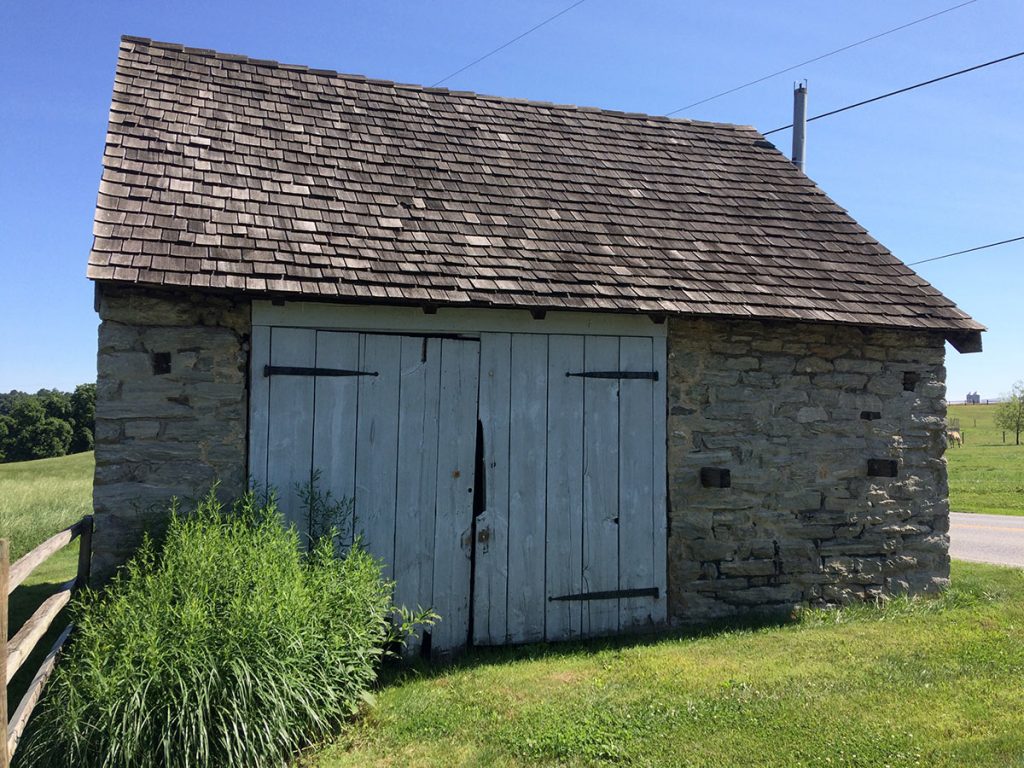 On the way to our next stop, the Hans Herr House, we passed by the site of Martin Meylin’s gun shop. This small, stone structure was built in 1719 and is where Meylin made his version of the famous Pennsylvania long rifle. It is quite likely that Andreas Hagenbuch and his sons, Henry, Christian, and John, all owned similar firearms made by other Pennsylvania gunsmiths. 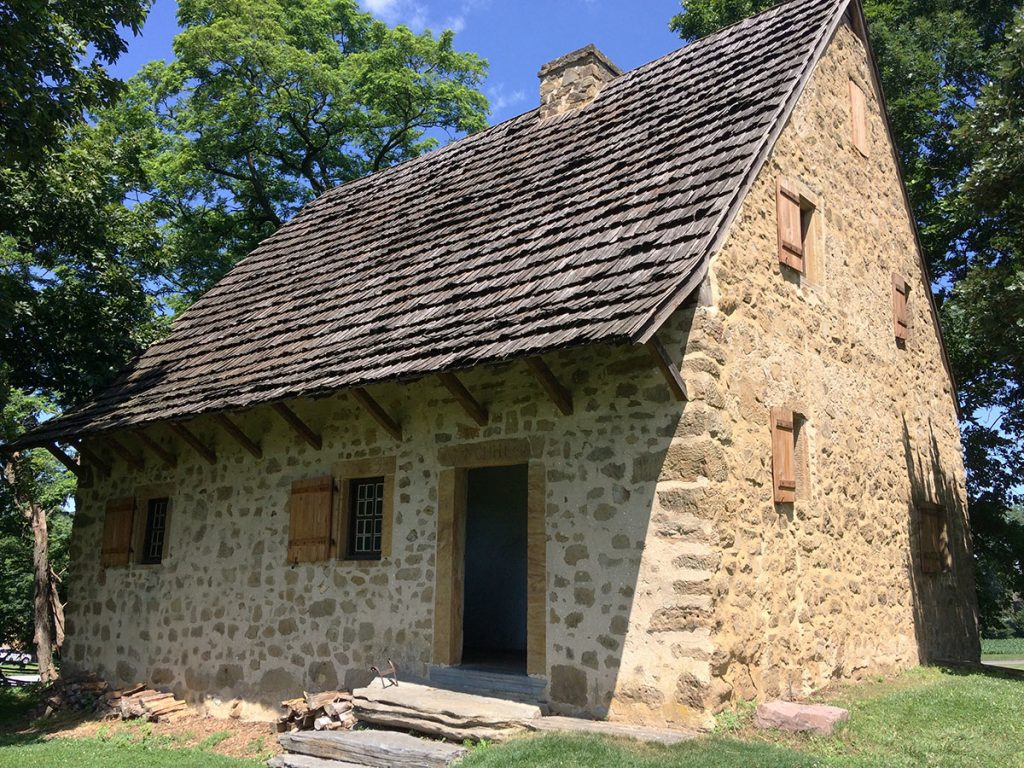 View of the Hans Herr House

At the Hans Herr House, we took a tour of the original, stone home which was built by Mennonite settlers in 1719. Though the early Hagenbuch family was Lutheran, not Mennonite, the historic house still exhibits key aspects of Deitsch architecture. 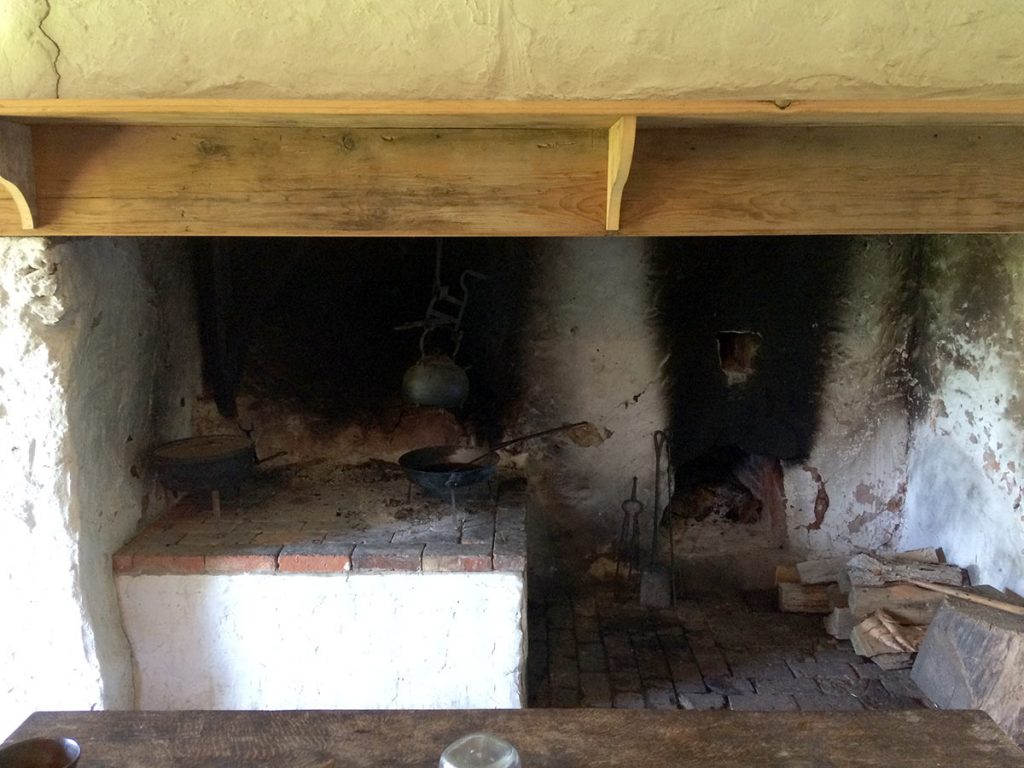 The hearth in Hans Herr House. Notice the opening on the right side of it, which would have been used to feed a five plate stove in the next room.

Like the earlier log home, the Hans Herr House had a central chimney connected to a cooking hearth in one room and a stove in the other. It also had a basement for the cold storage of food, and a large second floor loft with an attic. In particular, the stairs leading to the attic reflected a early style of Deitsch construction. 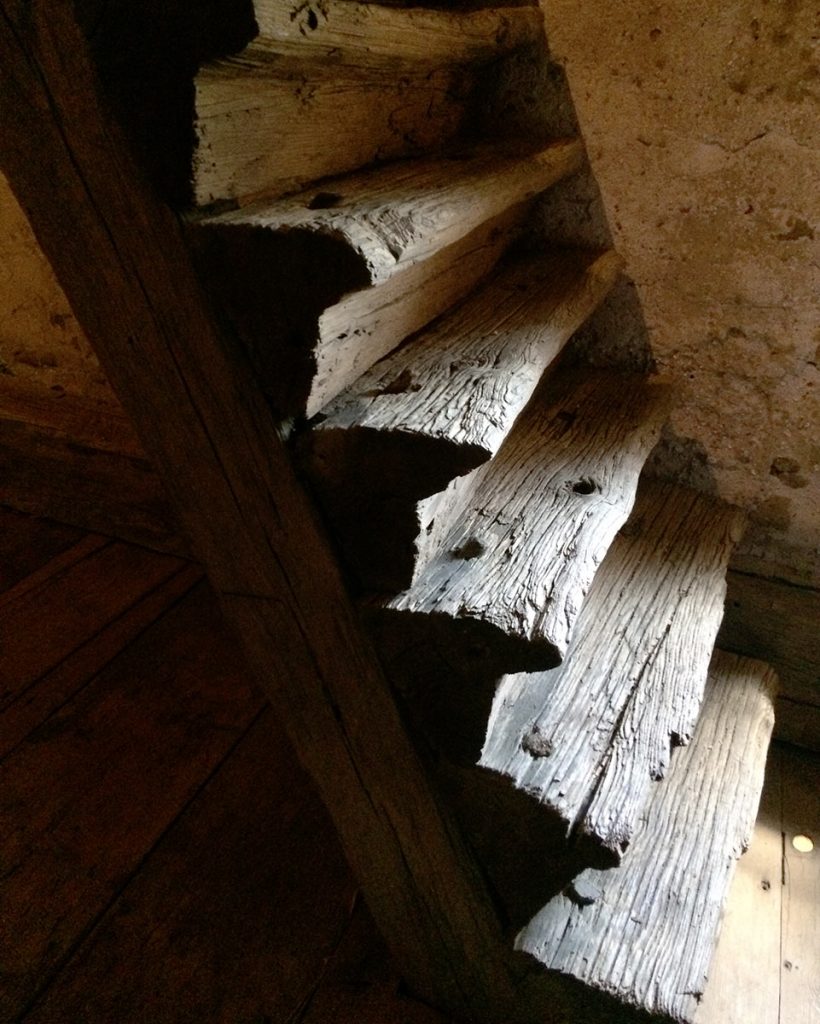 After enjoying a packed lunch at the Hans Herr House, we drove north through Berks County and east into Montgomery County until we reached the Peter Wentz Farmstead. Built in 1758 using red sandstone, the Peter Wentz House was truly something to behold. Unlike the modest homes we had viewed earlier in the day, this house was a Georgian-styled mansion complimented by a nearby barn, ice house, and other outbuildings. Yet, it still displayed some of the characteristics of the Pennsylvania Deitsch. 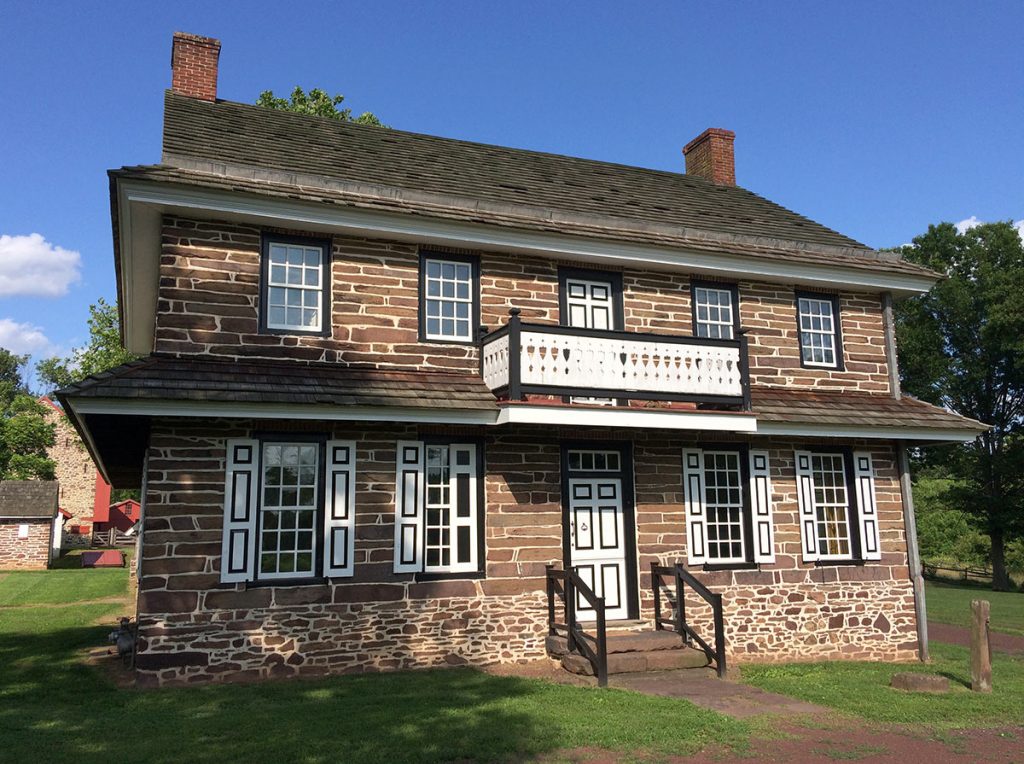 Front of the Peter Wentz house

For example, even though it lacked a central chimney, the structure still relied upon a cooking hearth that could heat the kitchen and feed a five plate stone in an adjoining front room. While exploring that front room, Chris noticed what may have been the home’s Heilige Eck or holy corner. Corner shelves in this location would have been used to store a family Bible and other important books. 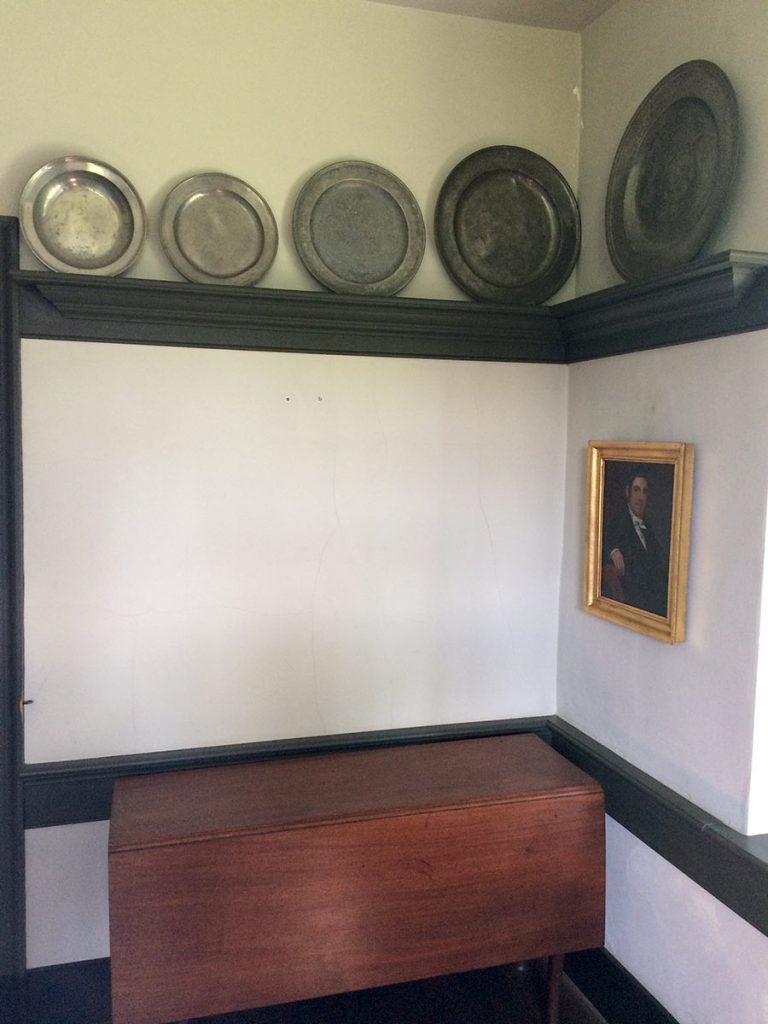 This corner shelf in the Peter Wentz House may have been the location of the home’s Heilige Eck.

While exploring the second floor, we learned that the Peter Wentz House played a key role in the early history of the United States. George Washington made it his headquarters and stayed there before the Battle of Germantown in 1777. 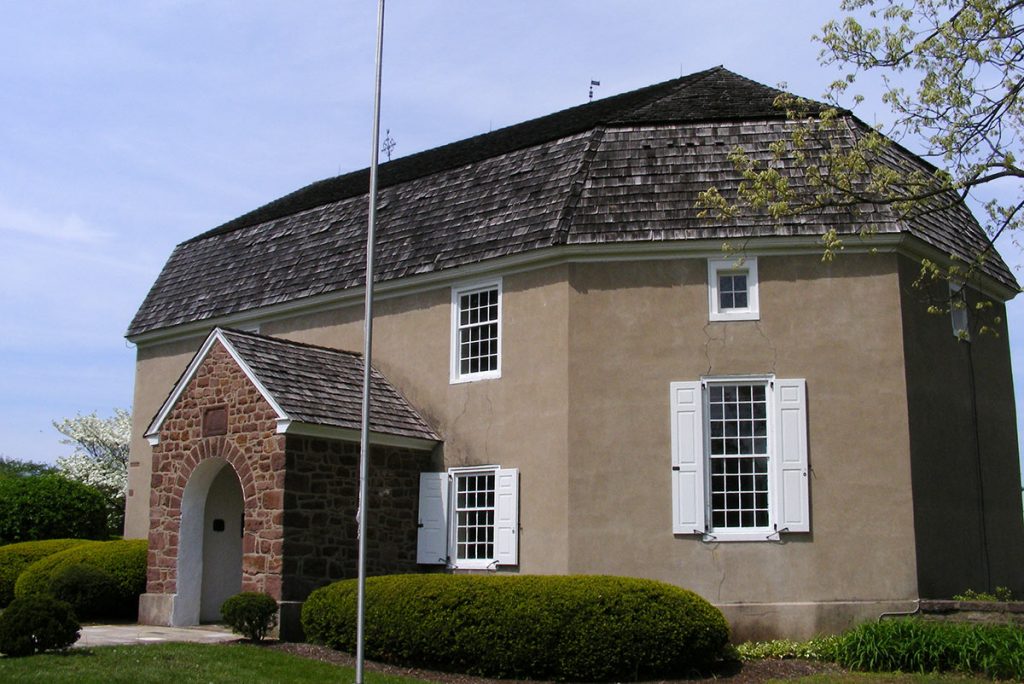 As our day drew to a close, Chris suggested that we drive past the Augustus Lutheran Church in Trappe, PA. Built in 1743, it is the oldest standing Lutheran Church in the United States. Though we did not go inside, we were able to see the exterior of this historic place of worship. Small in size and lacking a steeple, the church provided a sense of where our ancestors may have once attended Lutheran services.

Our final destination was Reading, the county seat of Berks County. It was here that we sat down to dinner at the Speckled Hen, a restaurant found within one of the few remaining log buildings within the city. As we enjoyed our food, my father, Chris, and I discussed the highlights of the day, Hagenbuch family history, and our mutual appreciation for all things Deitschy.

A special thanks to Chris Witmer for sharing with us his passion of Pennsylvania’s Deitsch culture.