Detail of an article from the Reading Times published August 30, 1917

With some regularity, my father, Mark Hagenbuch, and I stumble upon new information or other corrections to our articles. Sometimes these are substantial enough to warrant writing an entirely new piece. However, more often than not, the changes are so small that they never make it onto Hagenbuch.org. Below are several interesting updates and corrections to previous stories on the site.

The article Remembering the Cross Keys Hotel showed an 1838 newspaper advertisement that mentioned the original name of the building. We transcribed this as “Hagenbuch’s Mirthshaus.” However, after the article was published, reader Jean McLane wrote us to say that the name of the Cross Keys Hotel was “Hagenbuch’s Wirthshaus” and we had misinterpreted the stylized W as an M.

A wirthshaus—whose modern-day spelling in German is wirtshaus—is a tavern serving beer and light meals. This makes sense, as the Cross Keys likely began as a small establishment and, over time, evolved into a larger hotel. 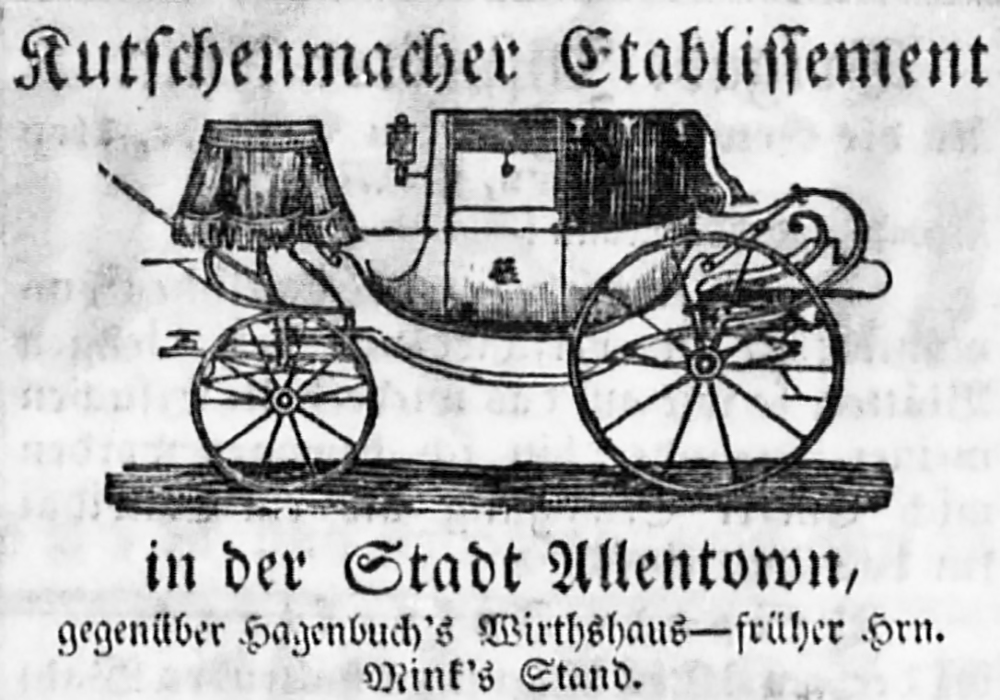 Early 1800s ad from the Pennsylvania Deitsch paper, Der Lecha Patriot und Northampton Demokrat. The ad mentions that the Rutschenmacher Establishment is located across from Hagenbuch’s Wirthshaus in Allentown.

Our big break came in 2018 when we worked to untangle four Reuben Hagenbuchs who lived in Pennsylvania in the early 1800s. One of these was Peter’s father, Reuben (b. 1825). Using census records, we were able to uncover evidence that Reuben’s father was Henry Hagenbuch II (b. c. 1785) who had been a United States Marine. The Joseph (b. 1795) once thought to be Reuben’s father was actually found to be the son of Christian Hagenbuch (b. 1747). 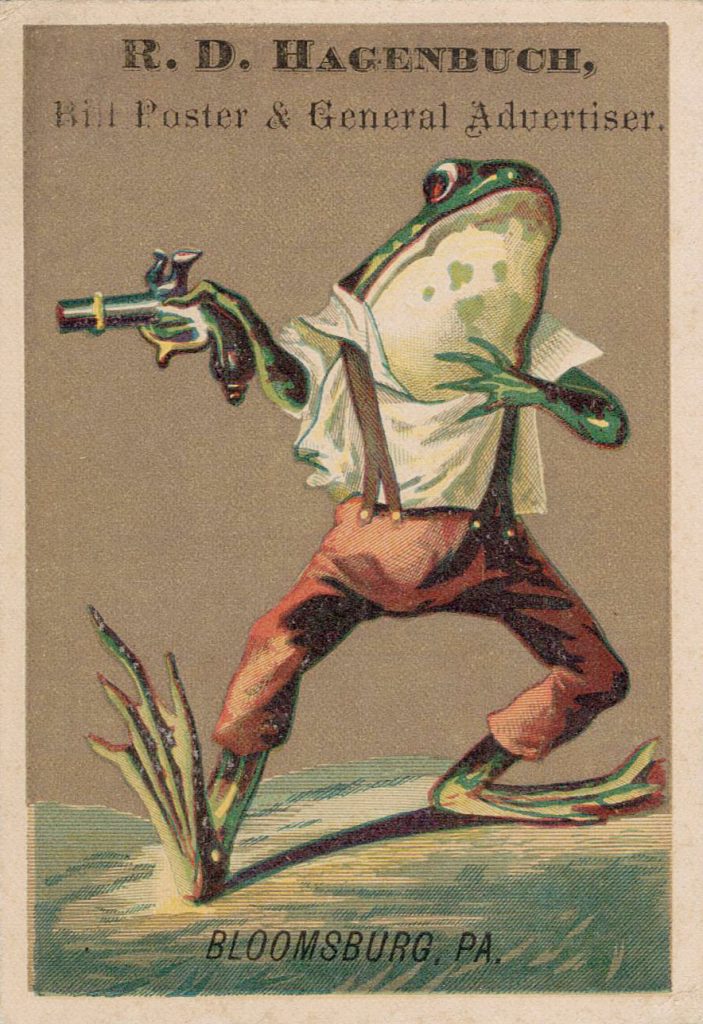 An article about trade cards featured one created for R. D. Hagenbuch of Bloomsburg, PA. The unique card included an image of a dueling frog and touted R. D.’s services as a bill poster and advertiser. While searching through old newspaper articles, I happened upon a brief statement in the Dollar Weekly News from July 19, 1884. It stated:

It would seem that R. D. Hagenbuch (b. 1853) had quite a fascination with frogs! 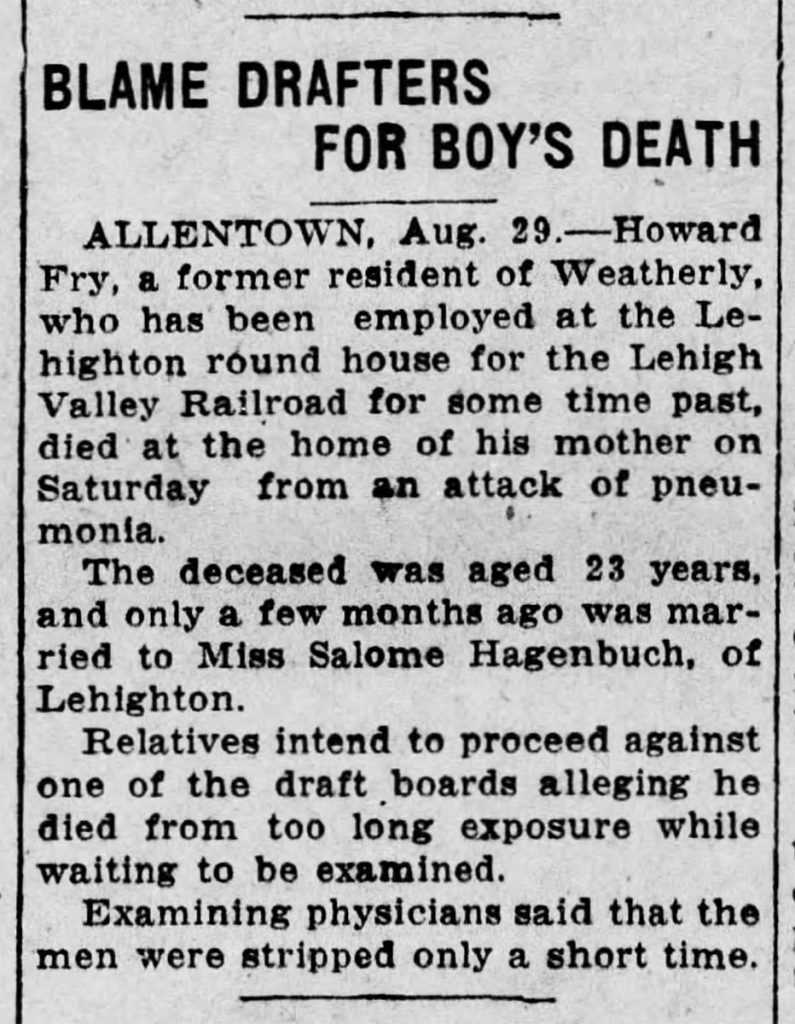 In 2018, we wrote about the family history behind a postcard sent to Salome Hagenbuch on September 4, 1911. One of the tragedies of the article was the death of her young husband, Howard Frey, Sr., on August 24, 1917. This occurred only three days after the birth of their first and only child, Howard Frey, Jr.

A recently discovered article published on August 30, 1917 in the Reading Times reveals that the family intended to pursue legal action against the local draft board for causing Howard, Sr.’s untimely death. They alleged that he caught pneumonia after being called by the draft board, stripped for a physical examination, and made to wait too long before dressing again. 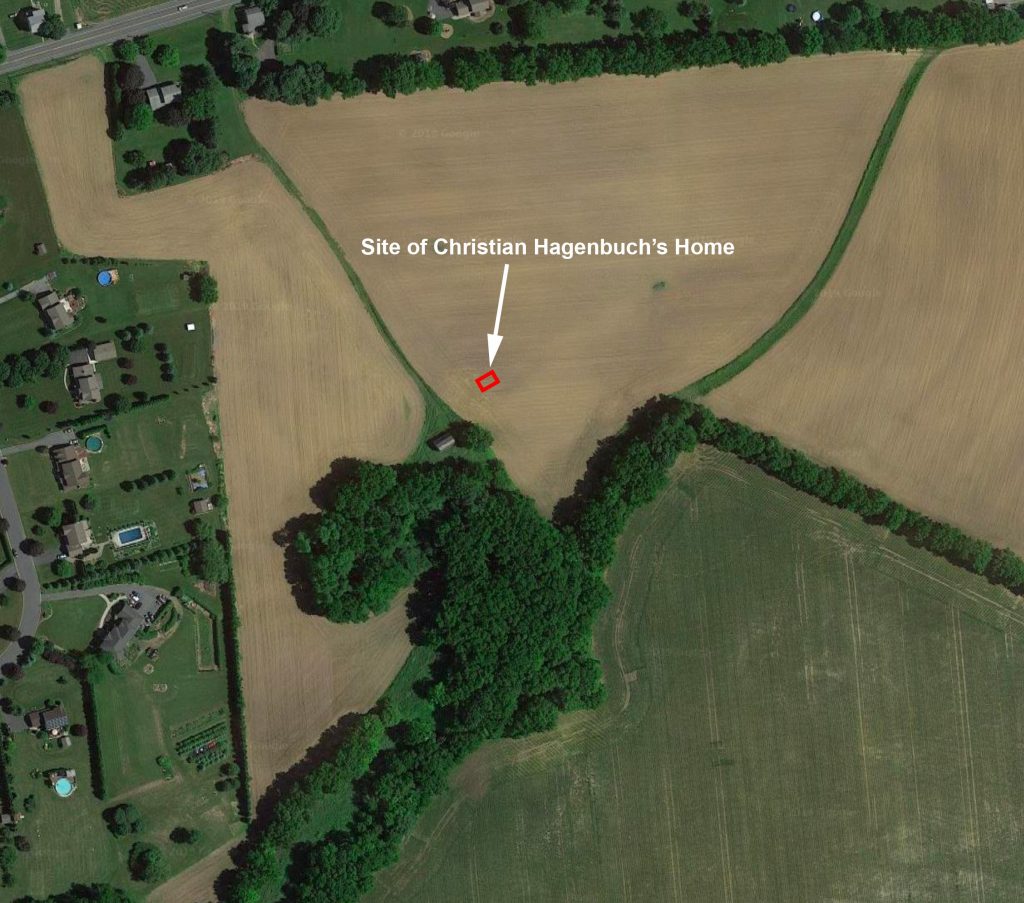 A previous article about the location of Christian Hagenbuch’s house suggested that the home once stood near to a copse of trees which contained a natural spring. Additional research—including aerial photography from the 1930s—has helped to confirm that the house was located near the spring. However, it was situated a bit further away from this than previously believed.

In fact, as the above map shows, the house was just to the north of trees and spring. Unfortunately, this also confirms what we had long expected: Nothing remains of the original home. It appears that the house was torn down, the foundation back filled, and the land repurposed for farming sometime before the 1950s.

Without a doubt, there are other articles on Hagenbuch.org that will eventually need to be expanded upon or revised. As we continue to explore our family’s history, my father and I look forward to sharing future updates, corrections, and discoveries with you.