A gravestone being uncovered. The numbers "178" are visible.

This article is the second part in a series documenting a visit to the Hagenbuch homestead in October of 2018. The first part can be read here.

After finishing our lunch at the Deitsch Eck Restaurant in Lenhartsville, Pennsylvania, my father, mother, wife, and I drove back to the Hagenbuch homestead. We were headed to the family cemetery plot located near the house that Michael Hagenbuch (b. 1803) built in 1851.

One of the most enduring mysteries of the Hagenbuch homestead is how two gravestones went missing from the family plot in the mid to late 1900s. My father, Mark Hagenbuch, wrote about the mystery in Issue 1 of the Beech Grove family newsletter that was published in 1982:

In the Fall of 1978 I was traveling near Albany, PA looking for Andreas’s farm. I had some clues where to find it and with some local farmers’ help, I eventually stumbled onto my destination…. [The farmer who owns the property] showed me around the farm buildings and pointed out some interesting things… I was just about to leave the farm when he mentioned that there was an old graveyard on the premises…

I’m sure that my excitement showed, especially when I got down on my hands and knees to dig out the stones with my bare hands. The graveyard hadn’t had any care since the last Hagenbuch had lived there in the 1850s (Michael, son of Jacob, b. 1777). The stones that could be seen were just barely sticking above the ground. My father [Homer Hagenbuch] and nephew [Tom Huffman, Jr.] were with me so that it didn’t take us long to pull the stones out of the ground and set them upright. We found about 10 stones arranged in three rows. Many of the stones were made of the beautiful red rock [bacon stone] which comes from the nearby Blue Mountains. One blow to my excitement was that none of the stones were inscribed, although it isn’t uncommon to find gravestones without inscriptions from those early days.

After righting the stones and taking some photos, [the farmer] mentioned that he knew of at least one stone that did have an inscription. But we could not find it. [The farmer] said that several years before a lady stopped by his house and asked if she could look around. When she found the graveyard she took some photos (later sending one to [the farmer]) and left. The stone with the inscription had been on the farm at that time and [the farmer] had the lady’s photo to prove it. Furthermore, a letter from Mrs. Helen Hagenbuch Durham states that she had visited the graveyard in the early 1970s. At that time there were two inscribed stones. Mrs. Durham sent me the photos of these stones that have mysteriously disappeared. 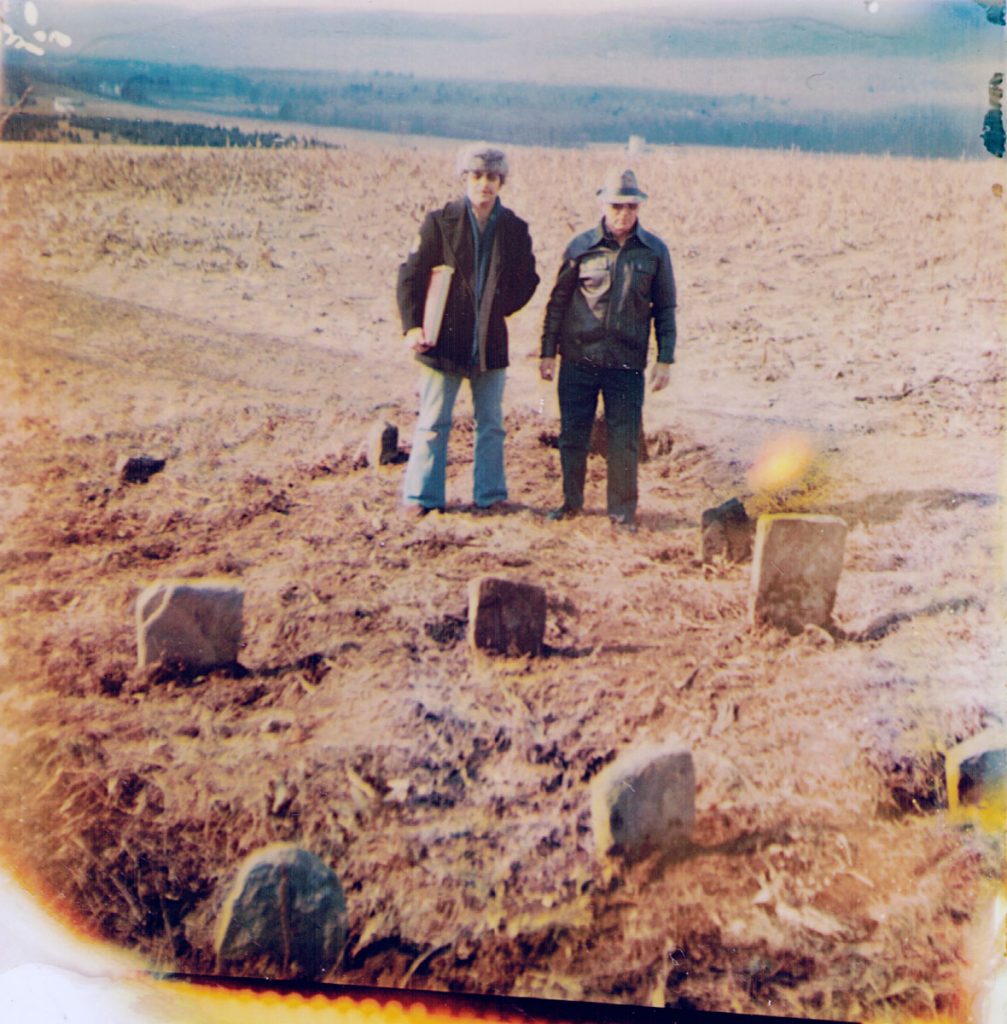 In 2010, when I first became interested in genealogy, my father told me the story of the missing stones. Finding these became one of the first pursuits before Hagenbuch.org was founded. Initially, we spoke with the local graveyard association in Berks County, PA and contacted relatives. To our disappointment, no one seemed to know what had happened to the stones.

Then, on August 6, 2014 my father made an amazing discovery while visiting the cemetery. The top of one stone was located a few inches below ground level. After some digging, it was exhumed and reset in place. The stone was inscribed with “AMHBIN, 1781” and matched one of the missing stones! It is stone 7 in row B on the below cemetery map.

Yet, the location of the second missing stone remained a mystery. 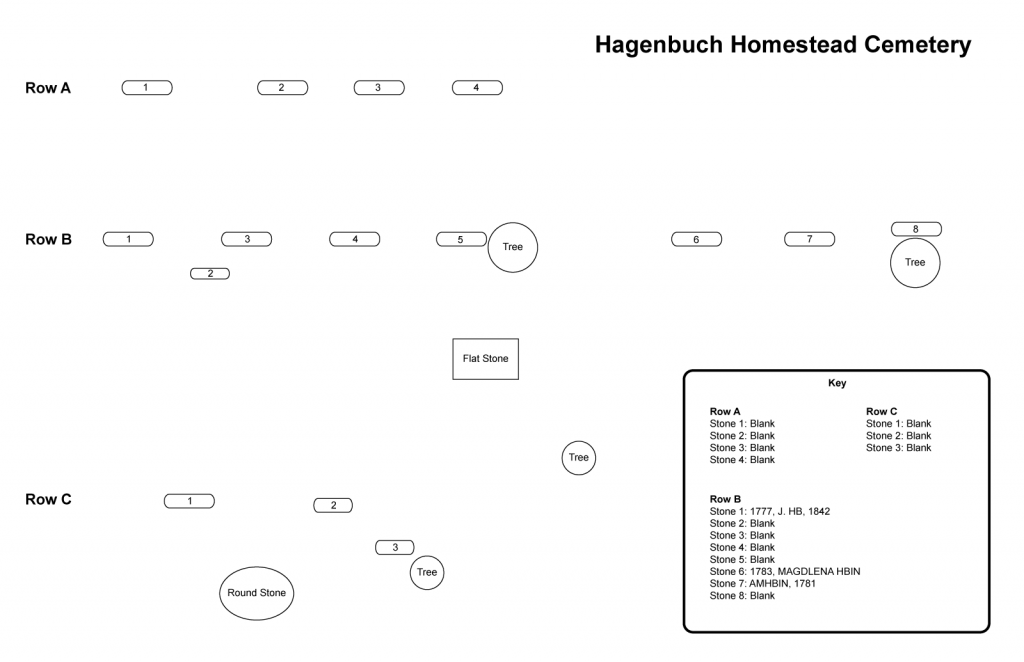 Map of the Hagenbuch Homestead Cemetery

The purpose of our October 2018 visit to the Hagenbuch homestead cemetery was twofold. First, we wanted to tour the pre-1800 homestead house and look for evidence that it was, at least in part, built by Andreas Hagenbuch (b. 1715). Second, we hoped to continue our clean up of the family cemetery plot and remove a stone that was embedded into a tree (stone 8 in row B).

Upon arriving at the cemetery, my mother and father began to work on freeing the stone from the tree. Soon after they began, I walked over to inspect the progress and noticed something on the ground. To my surprise, there was a stone with the numbers “178” on it. We immediately realized that this was the second missing stone! 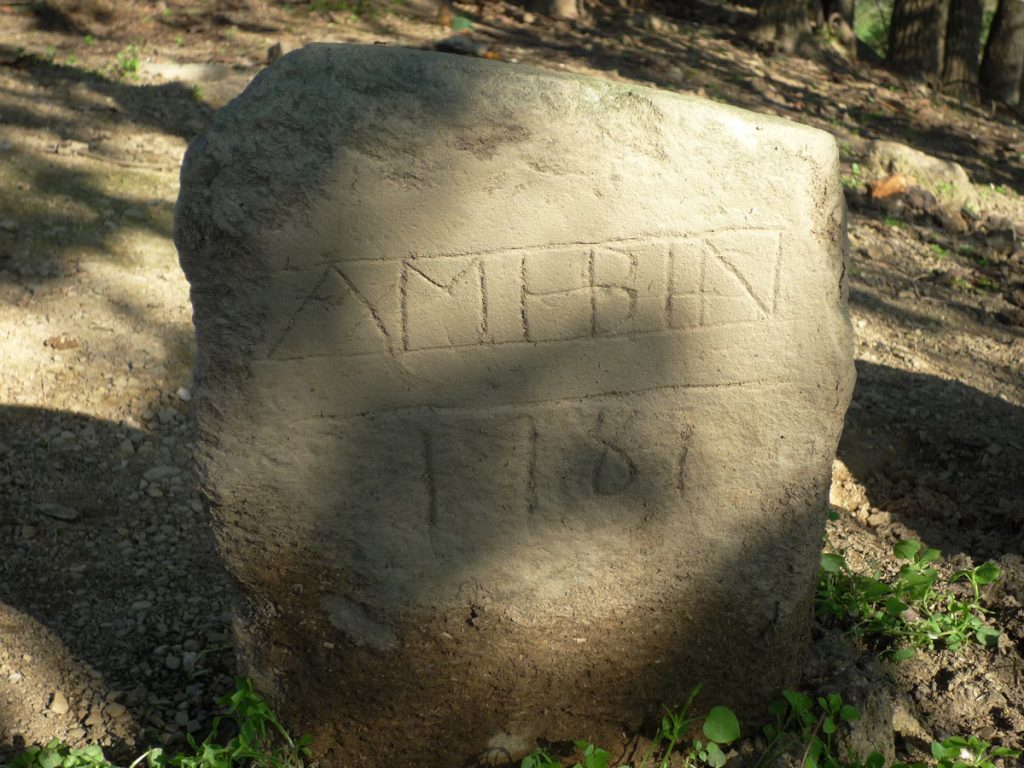 Now, in two teams, we worked to uncover the stones—one from the tree and the other from the ground. Sadly, as so many other stones in the cemetery, the one in the tree was blank. Although, our disappointment was quickly overshadowed by the excitement of finding the second missing stone which was inscribed with “1783, MAGDLENAHBIN.”

Curiously, this stone was broken off just below the text. However, we were able to match the break to the top of another stone, enabling us to place it with stone 6 in row B. Stepping back, we could see that the two missing stones “AM HBIN, 1781” and “1783, MAGDLENA HBIN” were directly beside each other. 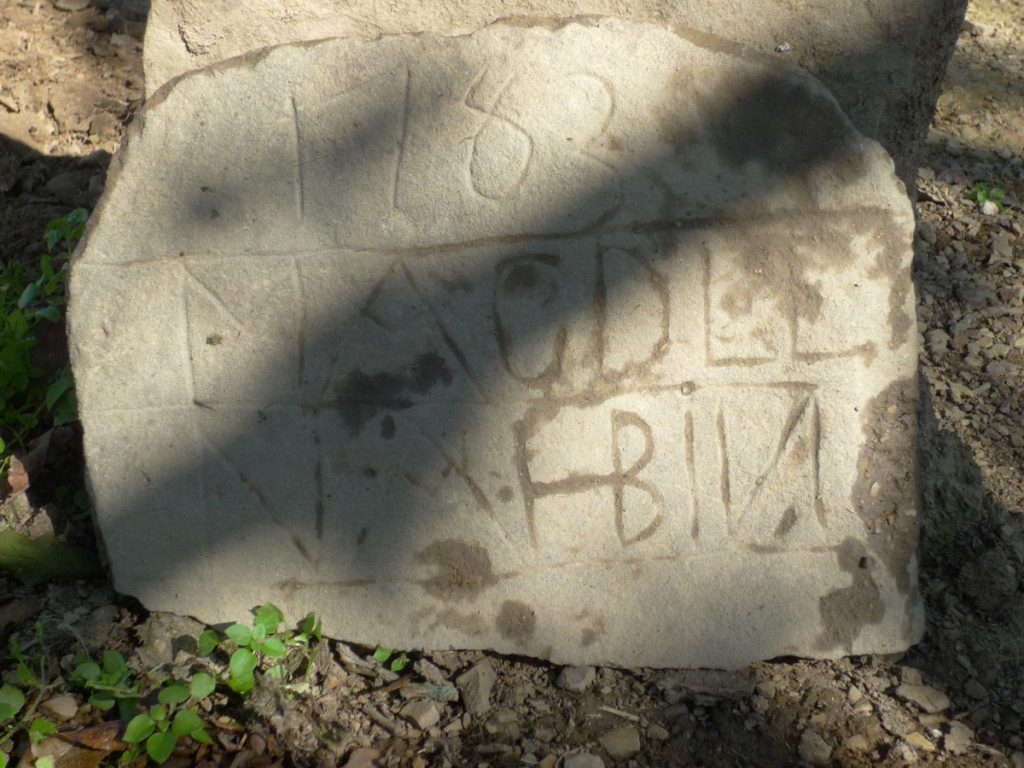 Our work that day in the cemetery revealed another gravestone too. The top of stone 1 in row A was found just below the surface, pulled up, and reset. Unfortunately, it had no discernible writing on either the front or back sides.

In the end, my father and I were pleased to know that the missing stones, thought lost for so many years, had been there all along. They had not been taken by someone, as was long suspected. Together, we posed with these important family artifacts and began to discuss plans for returning in search of additional stones.

Future articles will continue to explore the Hagenbuch homestead cemetery plot and the stones of those who are buried there.