A Visit to the Hagenbuch Homestead

Detail of a photo of the pre-1800 Hagenbuch homestead building

Several weeks ago, I visited the Hagenbuch homestead in Berks County, Pennsylvania along with my father, mother, and wife. The purpose of our visit was to explore the buildings at the homestead, as well as work in the family cemetery.

During the past few years, the bounds of the homestead have expanded to include two structures: one built in 1851 by Michael Hagenbuch (b. 1803) and another which, per county records, was erected before 1800 by an unknown builder. As discussed in a previous series of articles, the pre-1800 house is where Andreas Hagenbuch (b. 1715) is believed to have settled in 1741.

The owners of both properties generously allowed us to visit. At the pre-1800s house, we explored all three floors and the attic. The ground floor of the structure is stone, while the upper two are log. Entering through a 20th century addition on the second floor, we could see where a doorway was cut through the original log walls. 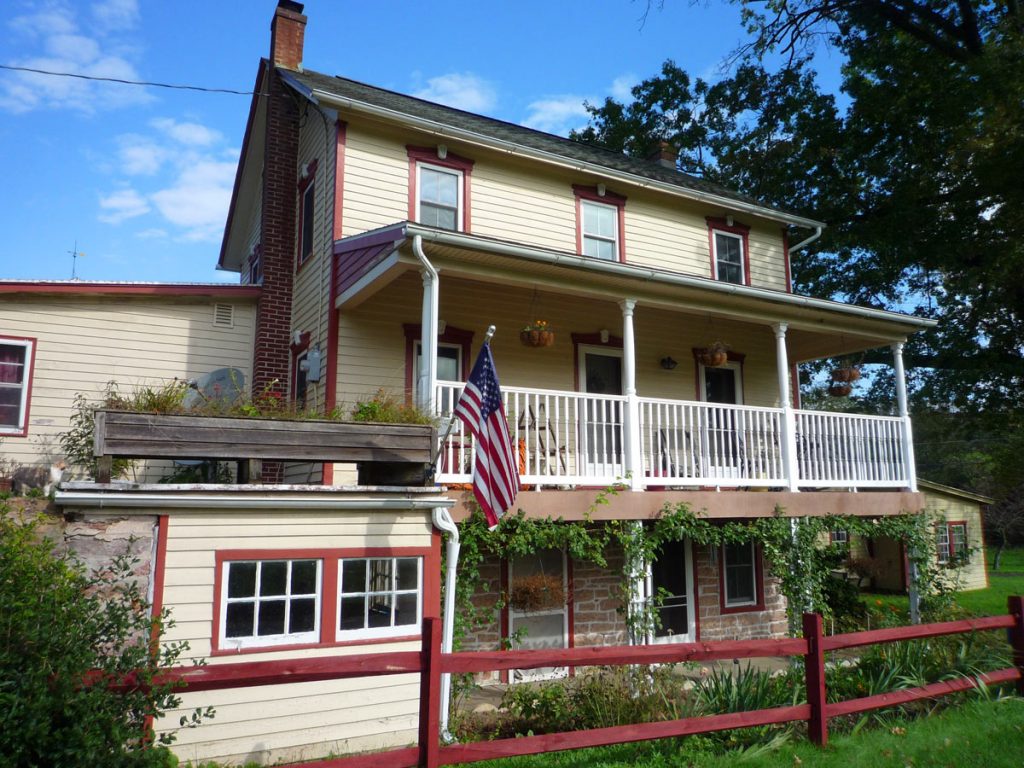 Exterior of the pre-1800 Hagenbuch homestead building. The oldest portion, the stone ground floor, is visible in the bottom center of the image.

One curious feature of the house is its banked style. Like a Pennsylvania barn, the house is built into a hillside. Research about banked homes yielded this text from the Pennsylvania Historical & Museum Commission (PHMC):

In the vernacular tradition some early stone houses were built over a spring to provide running water and a cool area for food storage in the basement. Some houses were also built into a bank or hillside, partially underground for similar cold storage reasons, as well as cost and material efficiency. This bank style of construction is attributed to medieval Swiss tradition, so buildings of this type are sometimes called “Swiss style.” Many banked houses were later expanded to become 2 or 3 stories with the ground floor then used only as a kitchen or for storage. Some early houses on the expanding frontier of Pennsylvania were constructed as fortified houses with extra thick walls and small windows to withstand Indian attack.

Several points in the above match what is known of Hagenbuch family history and the design of the pre-1800 home. First, the house is built into the hillside beside a hand dug well. Though the footprint of the original house did not include the well, it was later expanded to protect this important source of water.

Second, the Hagenbuch family is of Swiss origin, with its roots going back to the town of Hagenbuch east of Zurich. Third, as written about before, the Hagenbuch homestead served as a place of refuge during the French and Indian War, indicating it may have been built of stone as early as 1756. 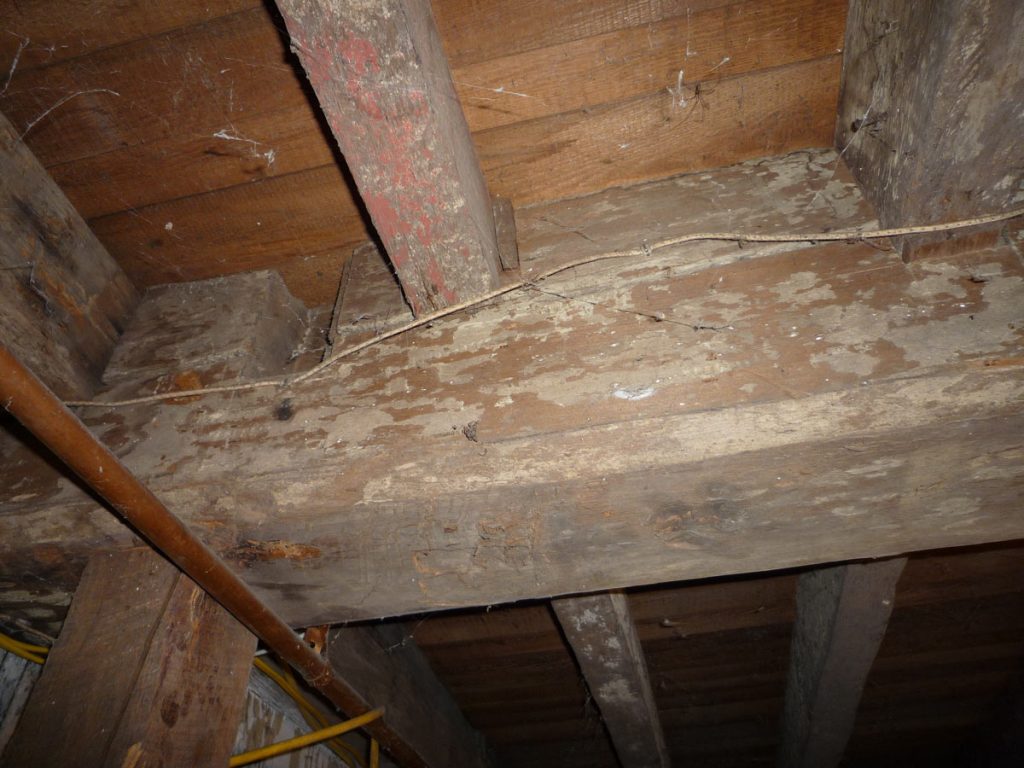 Lastly, the current home is three stories high, probably having been added onto in the early 19th century. Once this occurred, the ground floor was used in part as a kitchen. Though no longer in use, the remains of its cabinetry and counters still remain in place. This design corresponds with the above description.

The earliest PA German Traditional buildings were of log or stone construction and of distinctly medieval form with steep roofs, thick walls and small, irregularly spaced windows. These small early houses had floor plans which followed traditional layouts—some very simple one-room buildings, but more frequently a 2 or 3 room layout with a central chimney and corner “winder stair” leading up to a loft or second floor. The 3 room format called for a large kitchen or “kuche” on one side of the center chimney and two smaller rooms including a parlor or “stube,” and a bedroom or “kammer” on the other. This three room Germanic folk house is sometimes referred to as a “Continental Plan” by architectural historians. The two room format known as the “Hall and Parlor Plan” had only a kitchen (hall) and a parlor with a central chimney wall in between.

Once again, this additional description corresponds to the design of the pre-1800 house. The ground floor, built of stone, is small and is believed to have originally had two or three rooms. A stone chimney, removed in the 1800s, likely existed in the center of the structure where stairs now reside. Additionally, the current chimneys are much too new and were designed for use with iron stoves. 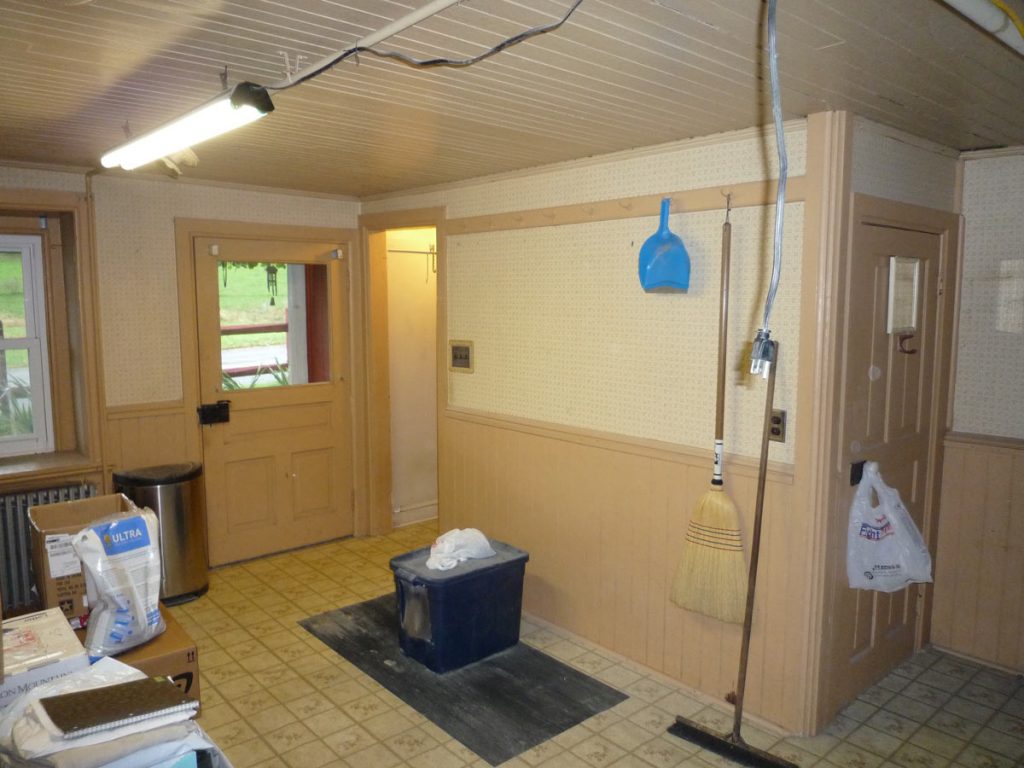 Ground floor of the pre-1800 building looking towards the staircase, where a center chimney likely once existed

After considering the available evidence and research, my father and I believe that the ground floor of the pre-1800s house may have been built by Andreas Hagenbuch as early as 1741. It is known that Andreas settled in the area in 1738 but did not move to the homestead property until three years later.

During those years, Andreas may have begun building the original home. This is imagined to be a stone, one story structure with a steep roof. The home included a center chimney, two or three rooms, and a loft. It was banked on one side.

Eventually, the house was expanded upwards and outwards to the point that its original form became nearly unrecognizable. Currently, only one date has been found within the house. In the attic, E. A. Ely signed that he painted the house on October 30, 1888.

After touring the pre-1800s house, our Hagenbuch entourage headed to lunch in Lenhartsville at the Deitsch Eck Restaurant. Over a meal of sauerkraut, scrapple, sausage, potatoes, and other family favorites, we discussed the history of the homestead and what we had just observed. Little did we know what discoveries awaited after lunch!

The next article in this series will document our return to the Hagenbuch homestead and a visit to the family cemetery plot found there. 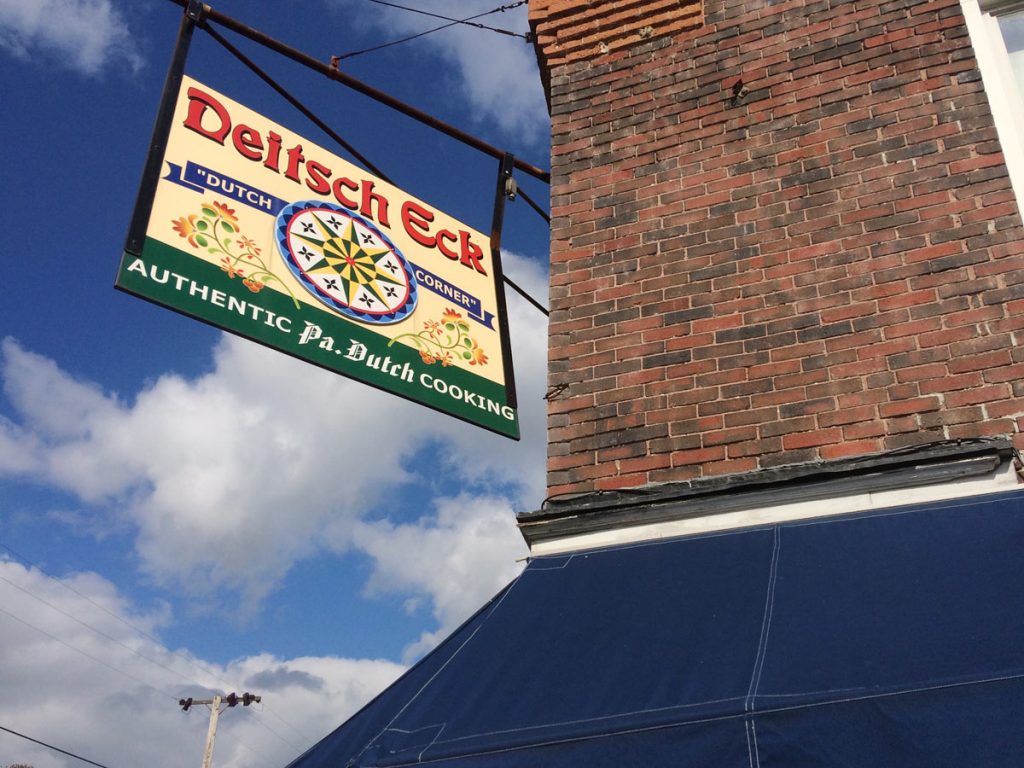 Sign outside the Deitsch Eck Restaurant in Lenhartsville, PA