You have read of the Civil War service of Shadrach Hagenbaugh and the horrors he endured at Andersonville. He, along with other Hagenbuchs, served during that long, bloody conflict. A cousin of Shadrach’s, Eli Thornton Hagenbuch, also served in the Union Army from 1862 to 1865 but had a completely different experience. Shadrach’s and Eli Thornton’s great grandfathers were brothers (Michael b. 1746 and Christian b. 1747) making them third cousins.

While searching through some Beech Grove newsletters for more information about Shirley, I came across an article that was written in June of 1985 on E.T. and the family. Buried in the article were 15 typed letters that E.T. wrote to a cousin when he served during the Civil War in the 25th Iowa Regiment from 1862 to 1865. I am not sure which of his descendants sent me the letters because at that time not only was Shirley a subscriber to the Beech Grove, but also were her sister Gayle Ticen and her cousins Gladys Miller, Earl Hagenbuch, Dorothy Stockwell, and Dorothy’s three daughters Mary, Susan, and Nancy. 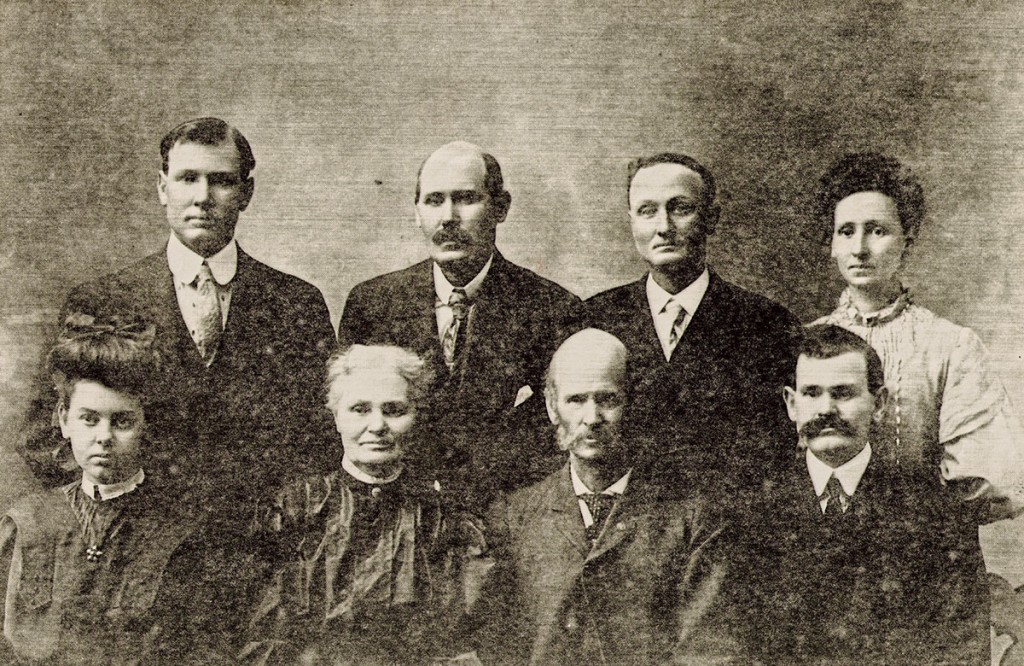 Eli Thornton addresses the letters to “Cousins,” sometimes to “Cousin Martha” or “Mattie”, and one letter to “Uncle, Aunt, and Cousins.” I have researched long and hard but cannot figure out who Martha/Mattie is, although I believe she is a relative on E.T.’s mother’s side—Larina (Thornton) Hagenbuch. In the letters, he asks about relatives on his mother’s side whom I have traced: cousins Susan, Sarah, and Rebecca Thornton; Hiram Thornton Bird; and his uncles Jackson Thornton and “Charley” Willits.

The 25th Regiment, Iowa Infantry was organized in September of 1862. In November it was ordered to Helena, Arkansas. It was part of General Sherman’s Yazoo expedition from December 1862 to January 1863, and then the regiment was marched to Louisiana. In May the regiment moved to Vicksburg, Mississippi, taking part in that siege. Afterwards, the regiment saw major action in Tennessee and marched on to Alabama and Georgia in 1864. It continued on this course moving from state to state and battle to battle too numerous to outline in this article, especially since E.T. spent most of his time as an orderly in the hospital at Cairo, Illinois!

Eli Thornton must have had some knowledge of nursing or was not cut out for the rigorous life of a soldier because from January 7, 1863 until January 31, 1864 the letters to his cousins are sent from the Post Hospital at Cairo. In a letter dated March 3, 1864 from Woodville, Alabama he writes to his cousin Mattie that on February 18th he was ordered to rejoin the regiment. However, by May 20th he is back at the Cairo hospital. This is his last letter in the series so we cannot be sure if he was ever sent back into action with the regiment before it was mustered out in June of 1865 or if he spent the complete last year of the war at the hospital.

Yet, even though E.T. was only active in the field for about three months, his letters are interesting to read. While at the hospital, he writes of what he hears concering his regiment’s progress in the war, he writes of patriotism and his religious beliefs, he writes of his health and family, and he writes about a Dr. Taggart several times. Very little has been discovered in researching Dr. Taggart, although one account from another person who served in the hospital describes the doctor as “noble”. As with other references to people and places in the letters, we will continue to research and ferret out details. 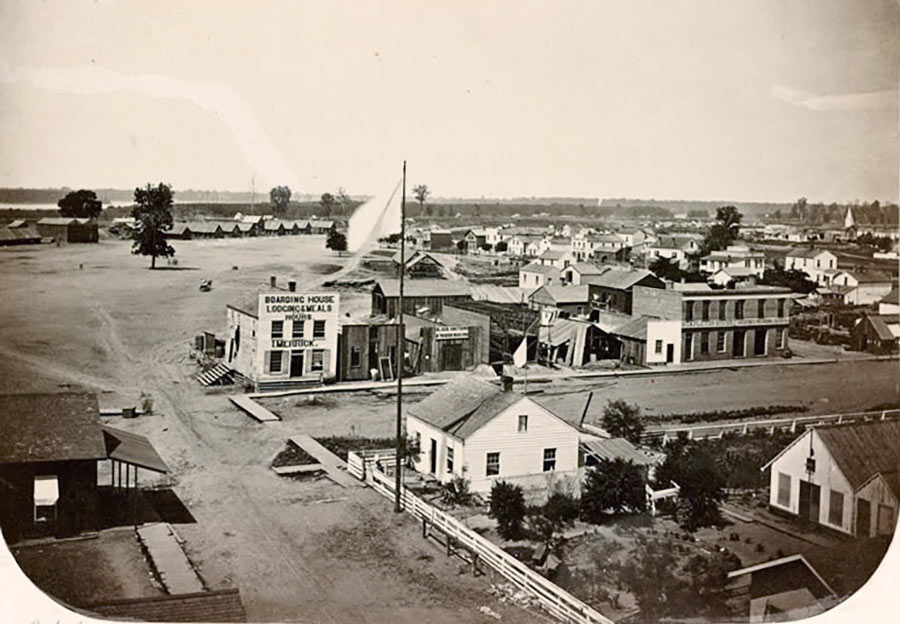 The brigade hospital in Cairo, Illinois can be seen in the lower right of this photograph from around 1861. Credit: mygenealogyhound.com

Three of the letters are written after he rejoined his regiment, and they moved through Alabama. Of course, these are filled with details of camp life and battling the rebels. They reflect the life and times of a 20-year-old man thrown into the fray of a national calamity.

According to promise I have at last seated myself to pen a few lines to you. We arrived at this place one week ago last Friday. Had a very good ride down the river. We were on the boat just fourteen days—five of them laid on a sand bar.

I have had good health ever since enlisting and hope I shall keep it until the war is over. I like soldiering very much. Like it better since I arrived in Dixie where I can see the condition of things. The country is entirely uninhabited. The houses, barns, fences and everything in fact belonging to a farm is burnt or destroyed some other way. The legislature of this state passed an act forbidding the people planting so much cotton and more corn. I will tell you how we use their corn. There were 300 men of our regiment went out about 13 miles with a forage train of 120 wagons. That is the way we take everything belonging to the citizens. We do not know how long we shall stay here but think not very long. When we move we will either to go Little Rock or Vicksburg. Expect to have something to do to take either place if we are fortunate enough to encounter the enemy in force.

My prayer is that the Lord will protect the right—if it is my lot to fall I will so help me God fall at my post discharging my duty to honor of my country. I shall not have it to say when the war is over that I feared not the cowardly heathen (if they may be called as good).

As I am on guard today and will have to go to my post in a few minutes and the Postmaster will leave with the mail before I will have a change to write more. Considering all things you will have to excuse these few lines. Give my love to your father and mother. Please write soon.

I remain as ever your cousin, E.T. Hagenbuch

More of E.T.’s letters will be retyped and analyzed in future articles.