Detail of a photo depicting a woman being visited by spirits, 1901. Credit: Library of Congress, John K. Hallowell and S.W. Fallis

Ghost (noun): an apparition of a dead person which is believed to appear or become manifest to the living, typically as a nebulous image.

As genealogists, my father and I see a lot of ghosts. While these are not the spooky, mischievous spirits of Halloween, they can be just as tormenting. The ghosts we know are dead relatives who mysteriously appear, then disappear, from historical records and provide us with more questions than answers. Our picture of them is often incomplete and nebulous. They lead us down fruitless research paths that suddenly reach dead ends. Yet, we continue to desperately search for details about these ghosts in hopes of telling their stories and putting them to rest.

A good example of a family ghost is Philip Jacob Hagenbuch (b. 1725), who was the younger brother of Andreas (b. 1715). We know that he went by “Jacob,” that he was born on April 1, 1725, and that he arrived in Pennsylvania aboard the Janet in 1751. From here, the rest of the details become murky. In 1765, he was a baptism sponsor for his nephew Henry’s son, Jacob. Later, in the 1770s, he appeared on several Berks County tax lists as a single man, living with or near his older brother, and owning no taxable property. Years ago, my father and I accepted that the rest of Jacob’s life was likely to remain unknown.

Then, like an apparition stepping out of the darkness, he appeared where we least expected it—in the Northumberland County deed book. According to an entry there, on February 6, 1755 Jacob received a warrant for 150 acres of land along “Mattle Kreeck in Shemokin in Cumberland County.” The location of this is believed to be Middle Creek, just south of Selinsgrove, PA in what is now Snyder County. Jacob may have been speculating on property, as he transferred this to John Brouss on September 3rd of the same year. Yet, for as exciting as these details were to find, they have led to no further developments, and Jacob has continued to be a mystery. 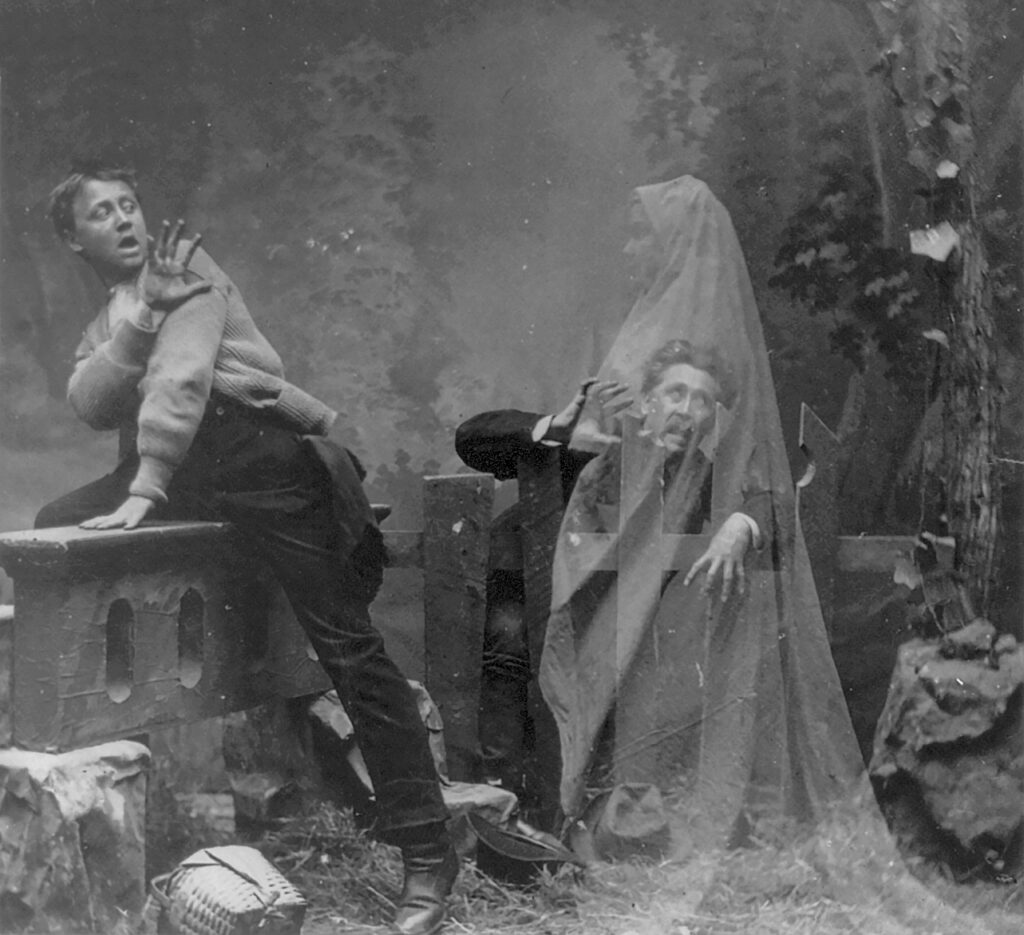 “The Haunted Lane” from 1889. Credit: Library of Congress, Melander and Bro

Recently, we were visited by a new ghost who managed to catch us off guard. It began with a message asking if we knew of a Hagenbuch female, born around 1755, who had some Flick descendants. Initial investigations turned up nothing. However, after a careful search of Ancestry.com, I found on the 1850 census a Mary Hagenbuch who was born in 1755 or 1756. At the time she was recorded, she was a widow and living with the family of Daniel and Catharine (Lily) Flick in Madison Township, PA. What a surprise, since my father and I had no prior record of this person!

Reading about Daniel Flick in the Historical and Biographical Annals of Columbia and Montour Counties yielded the following clue:

[Daniel Flick] was born at Philadelphia, PA, March 25, 1790, a son of John Flick, who died in Philadelphia. His widow, who probably came from Philadelphia with her son Daniel, later married a Hagenbuch, and died at the age of ninety-seven years.

Daniel Flick was a young man when he settled in Madison Township, Columbia County, where he acquired ownership of forty acres of land on which he had his cabinet-making shop, in which he made coffins; he was also an undertaker.

Based upon this information, I began to wonder what Hagenbuch man could have wed Mary? He would have needed to be about her age, alive in the early 1800s, and single. My father and I discussed a few possibilities. None of these worked until we remembered that John Hagenbuch (b. 1763), Andreas’ youngest son, became a widower after his wife Maria Magdalene Dreisbach (b. 1766) died in 1825. Further evidence came from the census, which showed John living with a woman around his age in 1830 and 1840. Considering that both the Hagenbuchs and the Flicks lived in Columbia County, this appeared to be it. Mary Hagenbuch was the second wife of John Hagenbuch. She outlived her two husbands, died around 1852, and was buried in Dutch Hill Cemetery, Columbia County, PA. We were able to put Mary to rest. 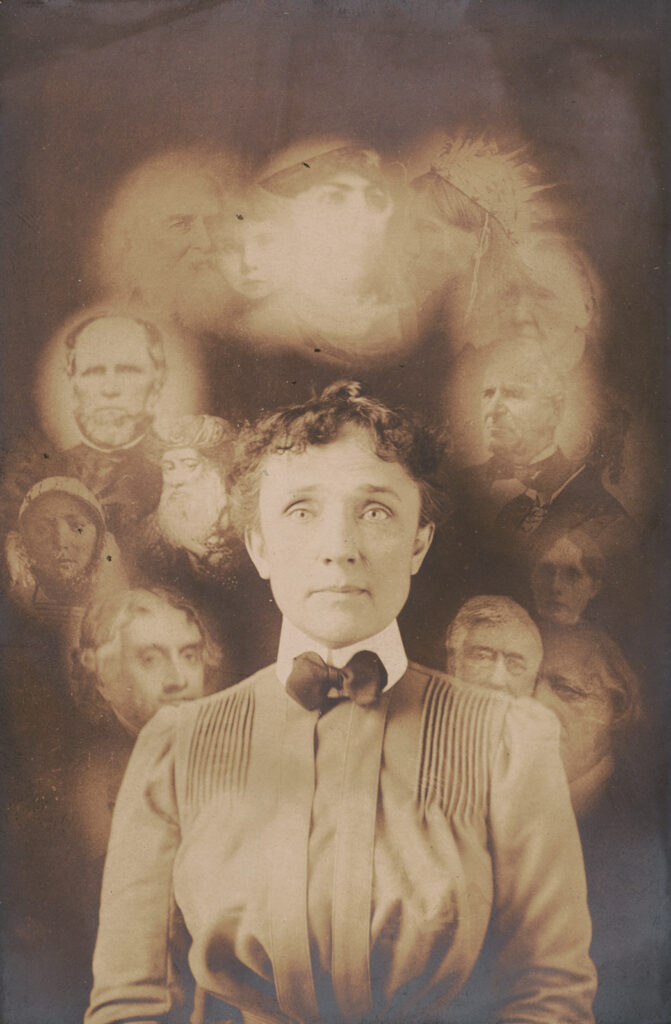 Photograph depicting a woman being visited by spirits during a seance, 1901. Credit: Library of Congress, John K. Hallowell and S.W. Fallis

Of course, there are some family ghosts that continue to torment us. One of these is Isaac Hagenbuch, who was born in the 1790s. While researching Hagenbuchs who settled in Ohio during the early 1800s, I stumbled upon Isaac on the 1850 census in Salem Township, Champaign County, Ohio. He was living with Reuben Hagenbuch (b. 1806) and was noted as 55 years old. No other record of this Isaac has ever been found.

Using this small fragment of information, we can guess that Isaac was the older brother of Reuben, meaning that his father was Christian (b. 1773). Christian was married twice: first to Susannah Siegfried (b. unknown) and later to Susannah’s younger sister, Elizabeth Siegfried (b. 1783). It could be that Isaac was the only child to Christian and Susannah, since she died in 1799. However, without further details, the image of this family member will remain nebulous.

Unlike the spooky, mischievous spirits of Halloween, my father and I look forward to future visits from family ghosts like Jacob, Mary, and Isaac. We welcome their appearances and the stories they keep trying to tell us from the grave. Even though they haunt our minds and frustrate our senses, it is exactly this challenge that makes researching our Hagenbuch family so enjoyable.