Over the last few months, I have been working to determine where Charles William Hagenbaugh (b. 1862, d. 1913) should be placed on our family tree. In Part 1 and Part 2 of this series, we explored the known facts about Charles’ life, as well as one theory for where he might belong in the many thousands of descendants of Andreas Hagenbuch (b. 1715). Yet, this was only speculation, and I held onto the hope that his death certificate might shed some additional light onto the mystery of his life.

Charles died on May 31, 1913 in San Francisco, California, meaning that his death certificate was filed there. In late March of 2022, I submitted a request for a copy of the document along with the required fees. Then, I waited. The whole process was supposed to take up to 100 business days—a ridiculously long time. One can imagine my delight when in early April I received an email that the death certificate was on its way!

For two days, I tracked its cross-country journey via UPS, from California to Kentucky and finally to where I live in Pennsylvania. On the afternoon of April 13th, there was a knock at the door. It was here! The delivery person asked for my signature and, after providing this, I took the large envelope inside. I paused, then ripped it open.

What did I find? Unfortunately, not much—rather—not much more than I already knew.

Charles’ death certificate confirms his name, that he died at the Letterman Hospital where he was employed, and that the incident occurred on May 31, 1913. All of these were known facts. Curiously, the document contains a dependency with his age. It records that he was 51 years old when he died and that he was born on February 27, 1863. However, if Charles were 51 years old when he died, his correct birth year would be 1862 not 1863. As a result, we will continue to use 1862 for the year he was born, although future research may change this.

The death certificate also notes that Charles was born in Ohio, not Michigan, and that he was married. Finally, it records his cause of death was angina pectoris (a heart attack) and shows that he was buried in the San Francisco National Cemetery. Again, these facts were known previously. Sadly, key pieces of information are missing from the document. Most notably, the names of Charles’ father and mother are listed as “unknown” as are their birthplaces. Such details could have solved the mystery of his origin and helped to place him on our Hagenbuch family tree. 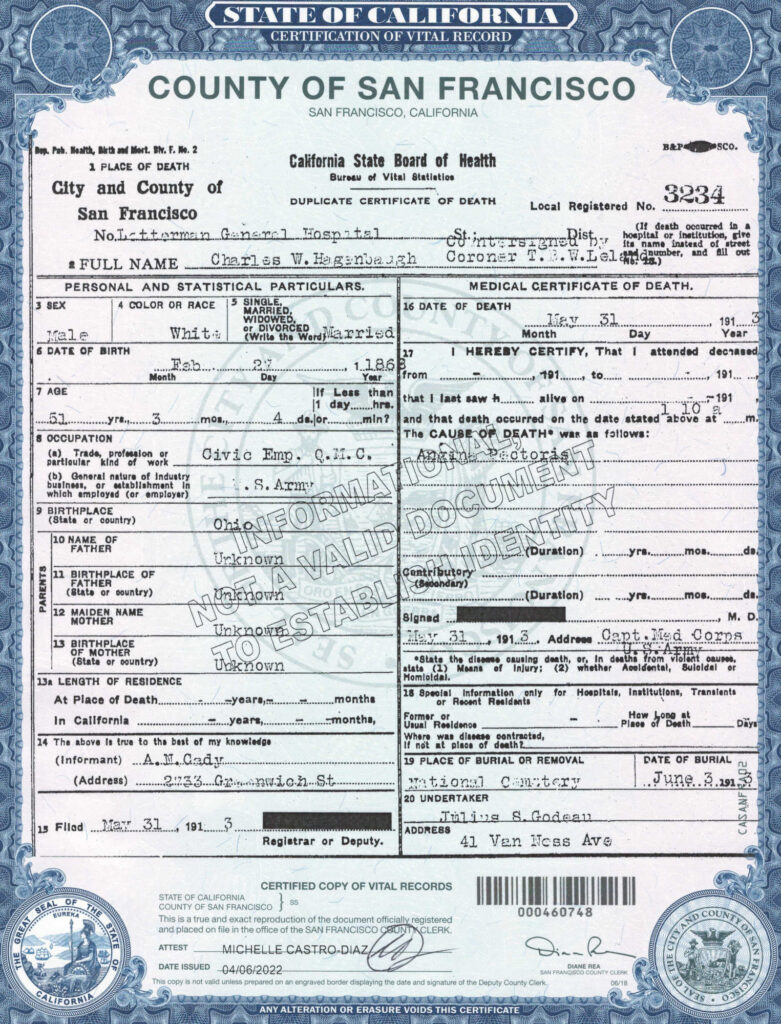 Death certificate for Charles W. Hagenbaugh who died May 31, 1913

As I put the death certificate aside, a number of questions popped into my mind. Who was A. N. Cady, the person who is noted as providing personal details about Charles? Why didn’t Charles’ wife, Albertina (Tepper) Hagenbaugh, do this? Presumably, she knew him better than anyone else and would have been able to better answer questions about him. A brief search for a “Cady” living at 2733 Greenwich Street in San Francisco yielded one potential match: Albert Cady (b. 1868). According to a 1918 city directory, Albert resided at the aforementioned address and worked as a machinist. Perhaps, he knew Charles through work or was a close friend?

Stuck again, I began hunting for some other clue about Charles W. Hagenbaugh that I might have missed. I took a shot in the dark and performed a Google search for “Charles W. Hagenbaugh.” Surprisingly, this yielded a result I had passed over earlier. It was a notice advertising the probate of Charles’ estate. Now, something about it piqued my interest.

Though Charles died in California, his estate was probated in Silver Bow County, Montana. Why? I knew he lived in the state before moving to California, but that was in Hill County over 200 miles to the north. Was there something here I had missed? Did Charles have some other business or property in Silver Bow County? The notice mentioned a will too. Might that document include the name of other close family members? Excitedly, I began drafting an email to the clerk of the district court in hopes of locating the probate files. 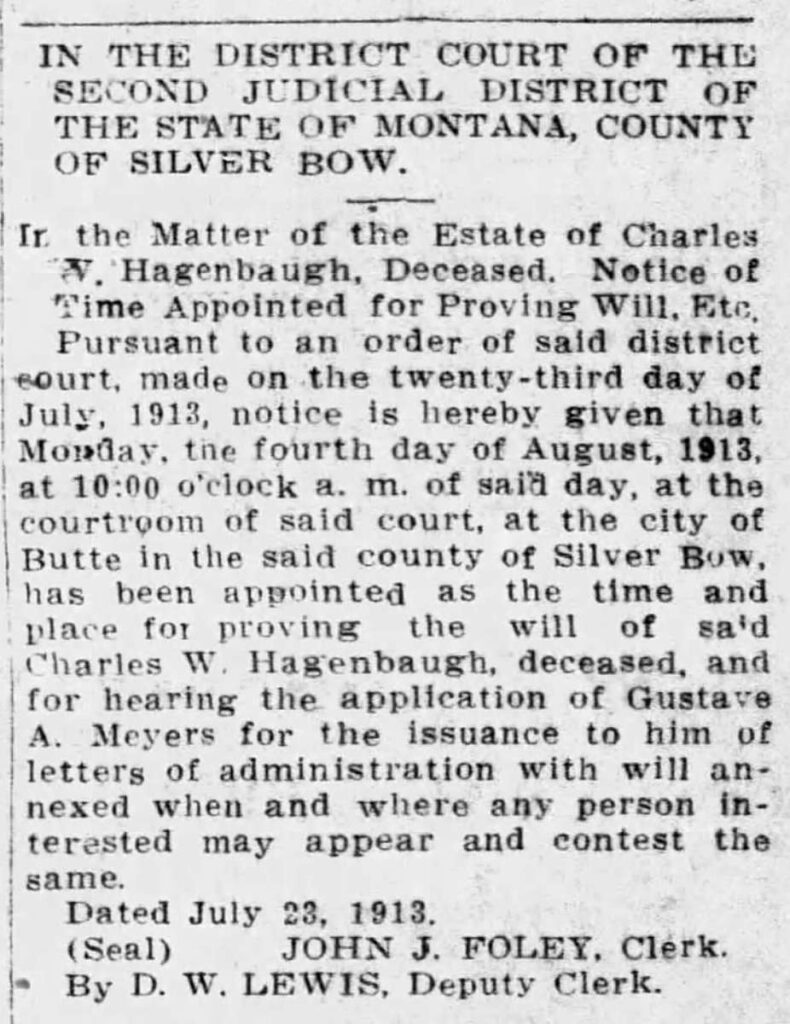 Notice of Charles W. Hagenbaugh’s estate probate from the “The Butte Miner”, July 30, 1913

Genealogy is a process, convoluted and winding, full of twists and turns. Sometimes we arrive at dead ends and become stuck. Then, out of frustration, we backtrack a little and find a new clue that opens up new avenues of exploration. In the case of Charles W. Hagenbuch, his probate file provides one more chance to solve the mystery of his life and place him correctly on our family tree. The next part in this series will examine what, if anything, is discovered!