Digging Up a Headless Hagenbuch

Our Halloween story begins with a newspaper article published on March 28, 1879 in The Colombian. It reads as follows:

For some days past rumors of a most extravagant nature, concerning the resurrection of a dead body on suspicion, at Espy, have been current in this locality. Years ago Abraham Hagenbuch lived in the above mentioned village, three miles this side of Bloomsburg. He was married and might have done better had he remained where he was. In 1867 or thereabouts, however, he removed to Wilkes-Barre and took charge of a hotel there. Later he and his wife were known as the keepers of a place of rather doubtful character, and some time last fall the old man ended his career rather suddenly by dying of heart disease. His body was brought to Espy, buried there, and might have rested in its grave for all time had not a queer story—one that caused all the secret talk and excitement—got abroad.

It was said that during a row at the deceased’s late residence in the city it was pretty broadly hinted that Hagenbuch had not died a natural death; and that subsequent investigation had disclosed the fact that the head was severed from the body and held in its place by being stitched to the trunk. We are glad to be able to give the latter revolting humor the quietus. The real facts in the matter are as follows: Suspicions were excited in some manner that there had been foul play, it is true; and investigation, headed by Dr. Case of Espy, was also held; but the discoveries made far from warranted the suspicions. It was on Saturday last that the grave was opened, the body taken out and submitted to the medical authorities. The proceedings were much the same, we understand, as the usual postmortem examination, but no traces of violence or other evidence of foul play were found.

I dug up this article while sifting through old newspaper archives. The absurdity here is that it was the townspeople, not Abraham Hagenbuch, who appear to have lost their heads during the whole affair. Newspapers really were the social media of the 19th century!

However, let us continue to investigate the dead and answer the question: who was this Abraham Hagenbuch?

Research shows that, indeed, an Abraham Hagenbuch was born around 1833 and died on May 28, 1878. He is buried at the cemetery in Almedia, Pennsylvania, near Espy. But, who were his parents? 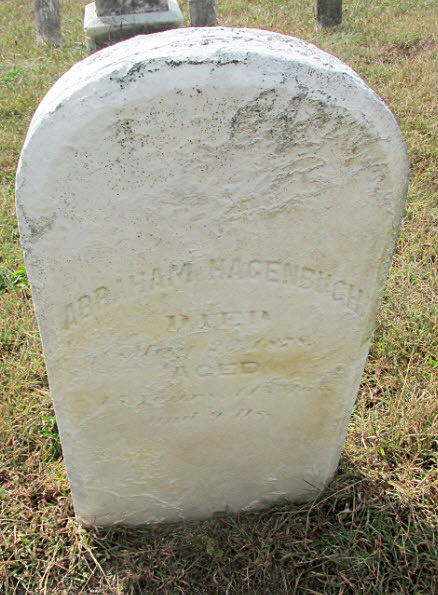 In 1850, the United States census reveals that Abraham was single and working as a boat builder. By 1860, he had married a woman with the initials of “E. B.” and was still employed as a boat builder in Espy. A marriage record from St. John’s Lutheran Church in Catawissa, PA notes that Emely Sheiner married Abraham Hagenbuch on June 28, 1857. Abraham then appears to have joined the Union Army in 1863 and served in the Civil War as part of the 210th Pennsylvania Regiment, Company E.

He next shows up in 1871 in a business directory, where he is recorded as owning a saloon in Wilkes-Barre, PA. Abraham died and was buried 1878, then exhumed and reburied in 1879. After being cleared of any criminal behavior, his widow continued to run the saloon in Wilkes-Barre. She is listed on the 1880 census as Emma Hagenbuch, and she resided with the couple’s six-year-old adopted daughter, Lizie Hellerbrandt.

Genealogy is one area of study that encourages us to visit cemeteries and, metaphorically speaking, dig up the dead. This week, in the spirit of Halloween, take a moment to remember your departed relatives who are in our Hagenbuch family tree.