Detail of a sketch of Andreas Hagenbuch (b. 1715) and some of his descendants. Credit: Greg Wonders

Is this new math? Does it represent some sort of algebra? Is it some sort of secret code? What sort of title is this for a genealogical article? I thought of titling this article: “Numbering Descendants” or “Two Begat Four with Five Begat Eleven…” But, the mathematical idea won out. It’s a puzzle, an enigma, maybe even a new way to report descendants.

Well, I hope it caught your attention! When I put an article together, I am always thinking of a catchy title, something that will make our readers wonder what it’s about and wander with curiosity into the story I have written about our family. Of course, some titles may be mundane because they mainly deal with a story that is names, dates, and places. But, usually Andrew and I create articles that are much more than just statistics and, therefore, require an appealing label. 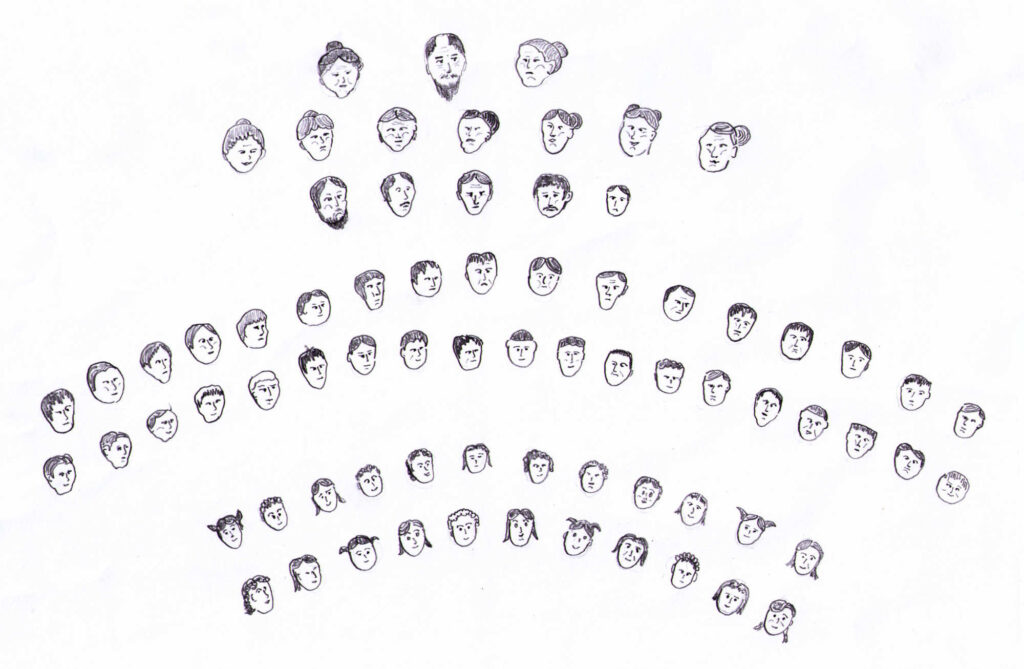 Pictograph depicting Andreas Hagenbuch (b. 1715) and his two wives in the top row, their 12 children in next two rows, and their 59 grandchildren in the last four rows—a total of 71 descendants. Credit: Greg Wonders

Many genealogists begin with themselves and work backwards to research all of their ancestors. When I was just 14 and began listing relatives for a family tree, I decided to start as far back as possible on that tree and work forwards. I created a family tree beginning with my 5th great grandfather, Andreas Hagenbuch (b. 1715), and began researching all of his descendants. The number of his descendants are probably more than the hairs on my head.  (Well, of course, as I don’t have much hair anymore!) Actually, Andreas may have more descendants than the number of hairs on most peoples’ heads!

Counting the children born to the other four sons and four daughters of Andreas and his two wives equal 59. (Although, there could be more, especially in the Schissler, Brouss and Stapleton families.) Adding together the 12 children of Andreas, and the children of those eight children who had children equals 71. So, we know that Andreas with two spouses had at least 71 descendants in the following two generations. Think of all the other descendants that are numbered from those 59 known grandchildren of Andreas, from which many of our readers are originated. We get into hundreds and even thousands of descendants! 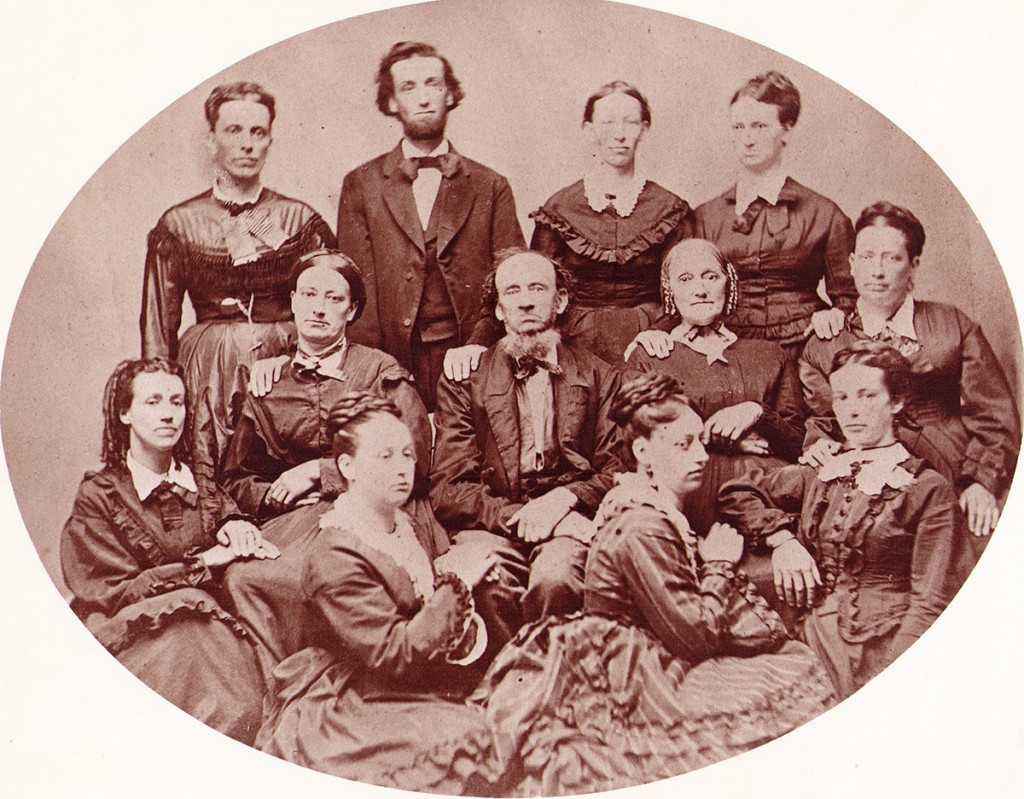 Although Samuel and Susannah (Hess) Hagenbuch were prolific in their begatting of children, their grandchildren do not number as highly as one would believe. Research has shown that Hester and Charles Goodman had no children and neither did Matura and James Mills. Altogether the remaining nine children had a total of 25 children which is an average of less than three children for each couple. One would think that even in the late 1800s the number of Samuel’s and Susannah’s grandchildren would be higher. However, with the number of children they had, their total number of descendants in two generations still equals 36.

Let’s compare that to my own family. My wife Linda and I have three children: Andrew (b 1981), Katie Emig (b. 1983), and Julie (b. 1986). We have four grandchildren. Andrew has two sons and Katie has two daughters. So, in two generations, Linda and I have created seven descendants. My sister Barbara (Hagenbuch) Huffman has two children. From her daughter’s marriage there are two children—a total of four descendants for Barb and her husband Tom. My brother Robert “Bob” and his wife Marcia have three sons, all married. Those couples have begat 10 children—a total of 13 descendants for my brother Bob and his wife Marcia. My brother David (with two wives) has three children and two of those children have children—total of three grandchildren for my brother Dave. So, in those two generations he has a total of 6 descendants. 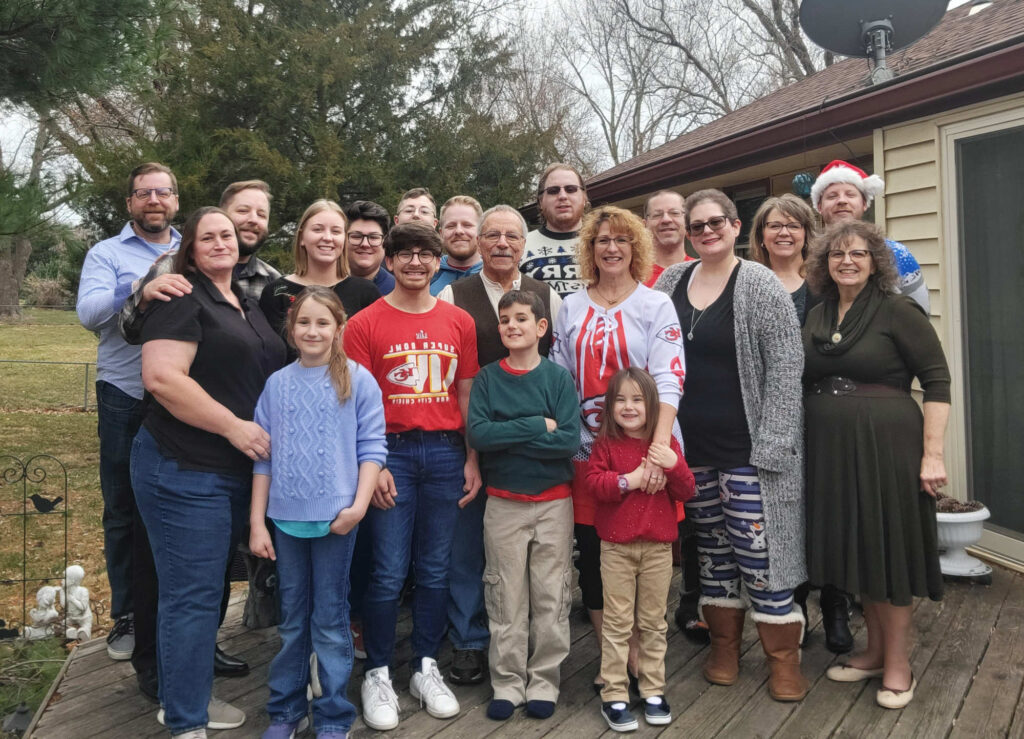 Robert Hagenbuch (b. 1944) and his wife Marcia (Monti) with three generations of their family, 2021

We have often heard it said that folks “back in the day” had more children because they needed them to work on the farms. However, what makes more sense is that folks back then did not have the modern contraceptives that we have had for the past 100 or so years. Also, women have had more options in the past 100 years or so than to marry and have a passel of children! Furthermore, as prices rose on food, clothing, and all those items needed to take care of children, people decided not to have as many children. There are, of course, other circumstances that weigh in on the number of children that a couple may have. For example, the fact that some families are more prolific than others can also be due to the ease of a couple creating children!

But, what about that strange mathematical sentence that is the title of this article? Here is a clue: Linda’s and my mathematical equation for two generations is: [(1+1=3)+2=4]=7. Sister Barb’s equation is: [(1+1=2)+1=2]=4. Brother Bob’s equation is: [(1+1=3)+3=10]=13. Brother Dave’s equation is: [(1+2=3)+3=3]=6. So, whose equation is in the title? It’s my parents’, Homer (b. 1916) and Irene (Faus) Hagenbuch (b. 1920); and instead of two generations as we’ve had in all the previous generational equations, this one covers three generations. My parents (1+1) had 4 children. Three were married once and had children, while my brother Dave had children with two marriages (4+5). All those marriages produced 11 children, 9 of them married, with 8 of those producing children through marriage totaling 19 great grandchildren for my parents. Altogether in three generations, my parents created 34 descendants.

This generational discussion and algebraic activity isn’t meant to confuse anyone. Rather, it is to show that the number of descendants from a man and woman can sometimes be large, sometimes small, and sometimes none at all. Of course, that statement is not jaw dropping! But, for me, writing this article did create another way to look at family—of generations, of descendants, and how our family has grown exponentially. It also gave me a chance to come up with some different ways to depict and describe our family by using mathematical equations that almost make no sense, as well as pictographic and photographic representations showing the number of descendants that can be created. Writing this article supports that our ancestors long ago, for the most part, did have large families and probably for the reasons stated above. It also gave me some fun and some whimsy while exploring “begatting.” The final word comes from an unknown author: “Friends may come and go, but relatives tend to accumulate!”