Detail of a photo showing homemade noodles being cut.

On New Year’s Day, Linda and I were supposed to have friends of ours over for the traditional Pennsylvania Dutch meal of sauerkraut, mashed potatoes, and pork. However, since it was just to be the four of us we decided to have some fine hot dogs instead of doing a whole pork roast. Then, the day before, after talking to our friends about the newest “plague data”, we decided to enjoy our food traditions without company.

As I was preparing the kraut and hot dogs, I went to get potatoes to peel and only found two! So, I also decided to do dumplings. When I was a boy, the most memorable New Year’s dinner was probably in 1962 when my mother’s parents, my Grandpa and Grandma Faus, visited. The meal consisted of sauerkraut, pork, mashed potatoes, dumplings, and buttered bread slathered with King Syrup. As I prepared my homemade dumplings this New Year’s I thought back to that day in 1962. It’s funny how foods seem to be part of our memory and heritage!

Over the years, Andrew and I have written a number of articles on foods. All of our immediate family are good cooks, and we relish homemade foods. Many of the foods Linda and I make are based on foods from the past, not only sauerkraut and dumplings, but also scrapple and waffles, chicken or ham pot pie, chicken corn soup, baked cabbage, applesauce, mounds of mashed potatoes, roast chicken and filling, and different types of cakes and pies. 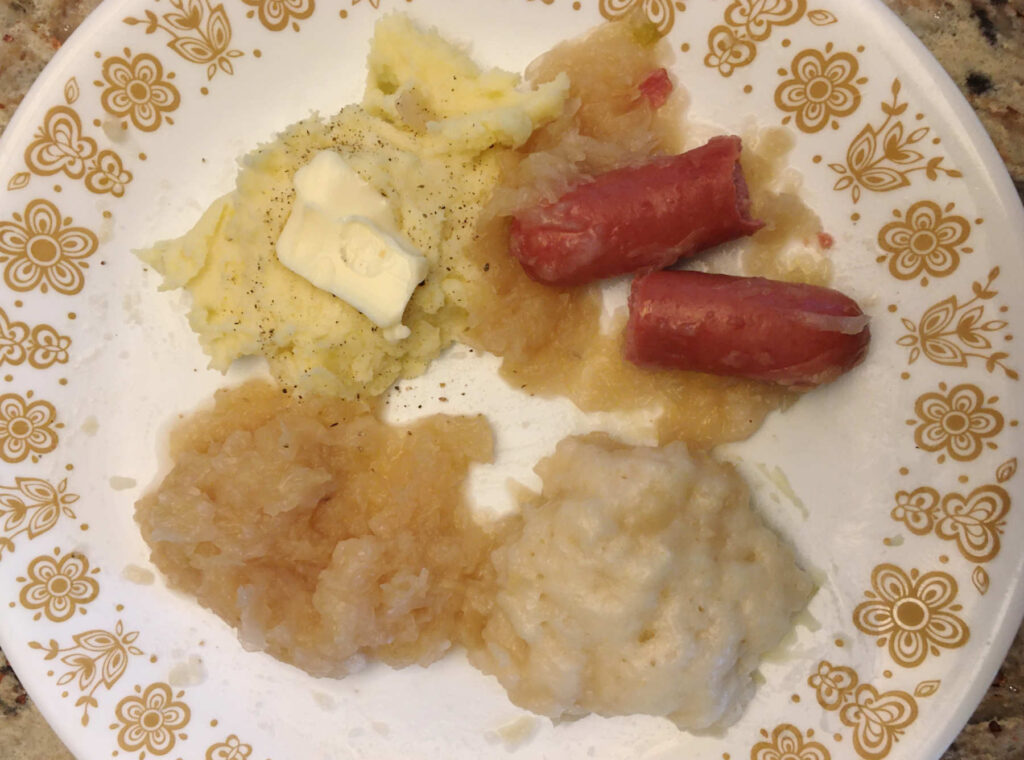 For the past year, I have been visiting a Facebook group, Pennsylvania Dutch Recipes and Traditions. It has over 245,000 members, many of them having ties to the Pennsylvania counties where our ancestors once lived—Berks, Lancaster, Lebanon, Schuylkill, Lehigh, and Northampton. Although the group is dedicated to recipes and traditions, it is heavy in recipes. Members post photos of what they have cooked, baked, or fried that day, oftentimes with an explanation of the food’s importance to their family’s heritage. The group page is light on traditions, although at times someone will post information about pow-wowing, genealogy, or speaking Pennsylvania Dutch. Even so, it is mostly about food, food, and more food!

Some of the most frequently covered issues on the page have to do with chicken pot pie versus chicken pie (there is a difference!), how to fry scrapple and what to put on it (King Syrup or apple butter), sweet Lebanon bologna versus regular Lebanon bologna (in a sandwich with mustard or Middleswarth potato chips), how to make sweet and sour dressings, the uses of bacon grease and lard, the making of pickled eggs, and the type of molasses to use for shoofly pie. I know of several of our Hagenbuch.org readers who are members of the Pennsylvania Dutch Recipes and Traditions group.

As one reads the various foods I have posted above, there are similarities that pop out. Dumplings, noodles, and potatoes are a staple in Pennsylvania Dutch cuisine, as are chicken and pork. Sweets and sours are often evident in the same meal with foods containing molasses and vinegar. Cabbage may be the king of vegetables, as its use is so common for sauerkraut, coleslaw, and one of our household favorites—baked cabbage—from the Betty Groff family cookbook. 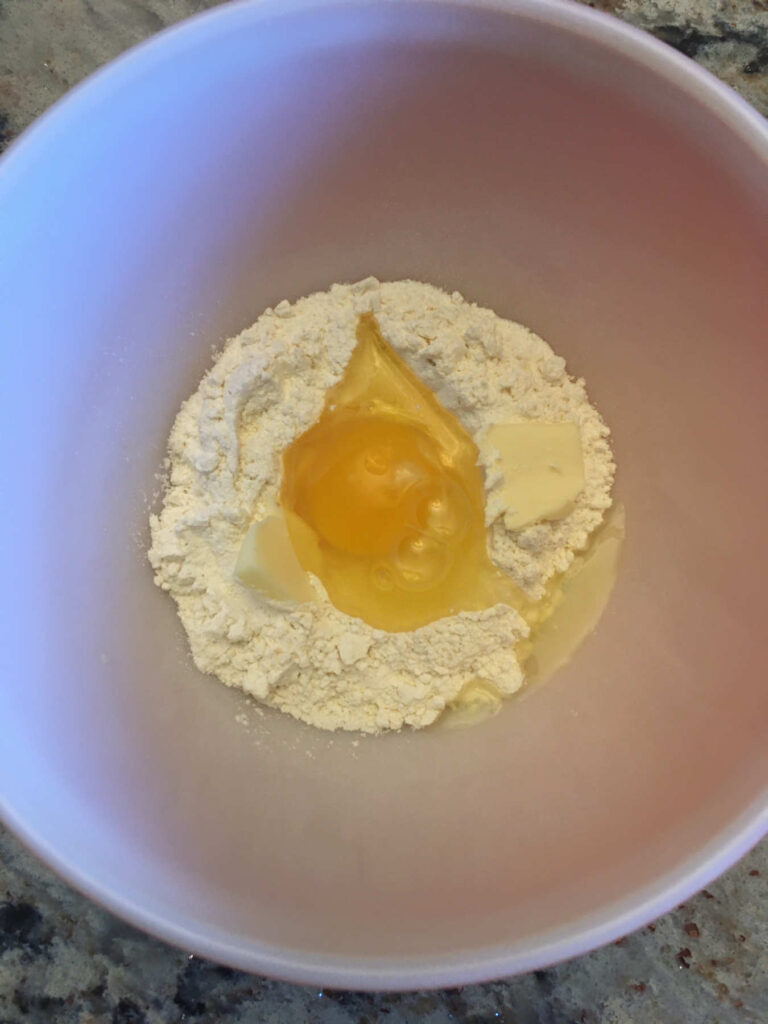 Making homemade noodles: Flour, salt, butter, egg in a bowl. Mix and add a bit of water and a bit of flour until the right consistency.

With winter now here and the “plague” surrounding us in various forms, Linda and I have become even more homebodies than usual. The other day, laying aside puzzles and playing cards, we went through cookbooks. She has several hundred! I found a cookbook which I used during our early years of marriage: The New Cookbook for Poor Poets and Others by Ann Rogers. I selected a recipe for lazanki which I had never made. Although it was not Pennsylvania Dutch, it allowed me to make and use homemade noodles (flour, salt, egg and a bit of water). I also made baked cabbage and fried chicken. A meal of chicken fried in grease with homemade noodles and cabbage meant the tastes of Pennsylvania Dutch to me!

The second cookbook I selected was by J. George Frederick who grew up in Berks County, PA: Pennsylvania Dutch Cook Book published in 1971. I leafed through its pages looking for typical Pennsylvania Dutch recipes, well, at least ones with which I am familiar! I found many interesting recipes but all seemed somewhat haughty. Most of the recipes have peculiar ingredients that certainly were not found in my mother’s “down home” cooking. Just give me a meal of chicken corn soup with homemade noodles, pickled beets and eggs, cabbage with sweet and sour dressing, and shoofly pie! Yet, the book’s first chapter, “Regional Cooking and the Pennsylvania Dutch”, is filled with nuggets of wisdom. 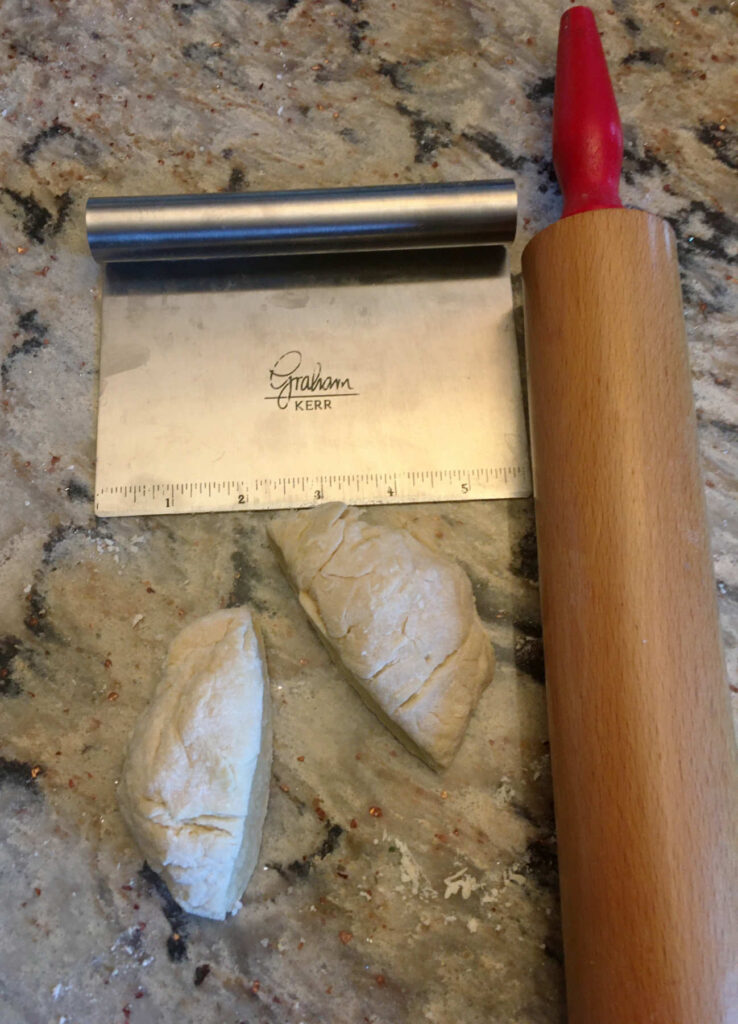 Author J. George Frederick writes about isolated groups of people whose regional cooking evolved from the raw items they grew and raised themselves (farm animals and vegetables). The Pennsylvania Dutch, also called Deitsch or German, had their own language, mostly lived on farms, were frugal due to necessity, and were mostly of the same Christian denomination (Lutheran or Reformed). They mixed with others outside their areas because of business and the need for items that they could not produce, grow, or build themselves. As Mr. Frederick states there has been such a push over the years to practice Southern cooking or New England cooking or French cooking or Far East cooking that Pennsylvania Dutch cooking has taken a back seat. He writes:

If one faces the fact that the Pennsylvania Dutch territory comprises only five or six counties of the Keystone state; that it is a mere tiny fraction of land in comparison with Southern territory, or with New England territory, it becomes clear that no other similar piece of territory in the entire United States ever acquired so notable a reputation in gastronomy.

A basic theory of Mr. Frederick is that our tastes today have been so watered down with restaurants featuring food from other countries and fast food establishments that we have lost our taste for regional foods that give us memories of a traditional heritage. Yes, I enjoy going to Asian restaurants, Italian food establishments, and even the occasional Wendy’s or Burger King. But, these are not the types of fare that tug at my food memories. Frederick continues:

Something is swallowed with (Pennsylvania Dutch) food which conditions a person for a life-time…A standard has been set; a memory etched; a yardstick of food delight notched accurately, by which all other food ever taken will be measured infallibly . . .

The Pennsylvania Dutch have never been accused of being undernourished or badly fed. Their diet was, from our modern sedentary point of view, perhaps rather too lusty and hospitable in earlier days, and from the point of view of modern out-of-season food facilities too limited during winter days—but this was no fault of the (Pennsylvania) Dutch. Florida lettuce, Texas broccoli and California oranges were not delivered to a 1735 farm door in February, as in 1935! We are a very spoiled people today in regard to food, and inclined to discount clever cookery in favor of sheer variety.

For me, Mr. Frederick writes volumes of wisdom. I enjoy reading cookbooks from other countries. I enjoy watching Julia Child create French cuisine. I sure enjoy Pizza Hut pizza! But, I enjoy making homemade noodles and dumplings and eating them in simple cookery. I love a breakfast of bacon, scrapple, dippy eggs and waffles (with King Syrup!). And, I relish my pies with homemade crusts, custards, puddings, and foods which feature sweet and sour sauces.

Case in point, this morning the temperature here in Dillsburg was only 4º Fahrenheit, a perfect day for a homemade beef noodle soup. The tasty dish consisted of a soupbone from the freezer (boiled for several hours and cleaned of all its meat), carrots, onions, some bouillon, and noodles.

I don’t have a set recipe to make noodles for soup or pot pie. I started with a 1/2 cup of flour only because I wasn’t making a large pot of soup. I sprinkled the flour with some salt and used a small bit of soft butter (optional), crumbed it up with a fork, then beat an egg in with it, added a bit of water, and made into a soft dough. Finally, I added more flour to get the dough to the right consistency for rolling out.

I cut the dough into two parts and rolled each flat. The amount of rolling depends on how “fat”, or thick, you want the noodles. I like fat noodles, cut into strips of all different sizes. Sometimes these are short, sometimes long, and sometimes in squares for pot pie. I make the cuts with a “black-handled knife” (our term for an old fashioned knife which works best). Then I put the noodles in the boiling broth for a while, around 20 to 30 minutes. After a while, I just try one and make sure it is done! You can also just boil them in water and eat them with butter. Mmmmm! 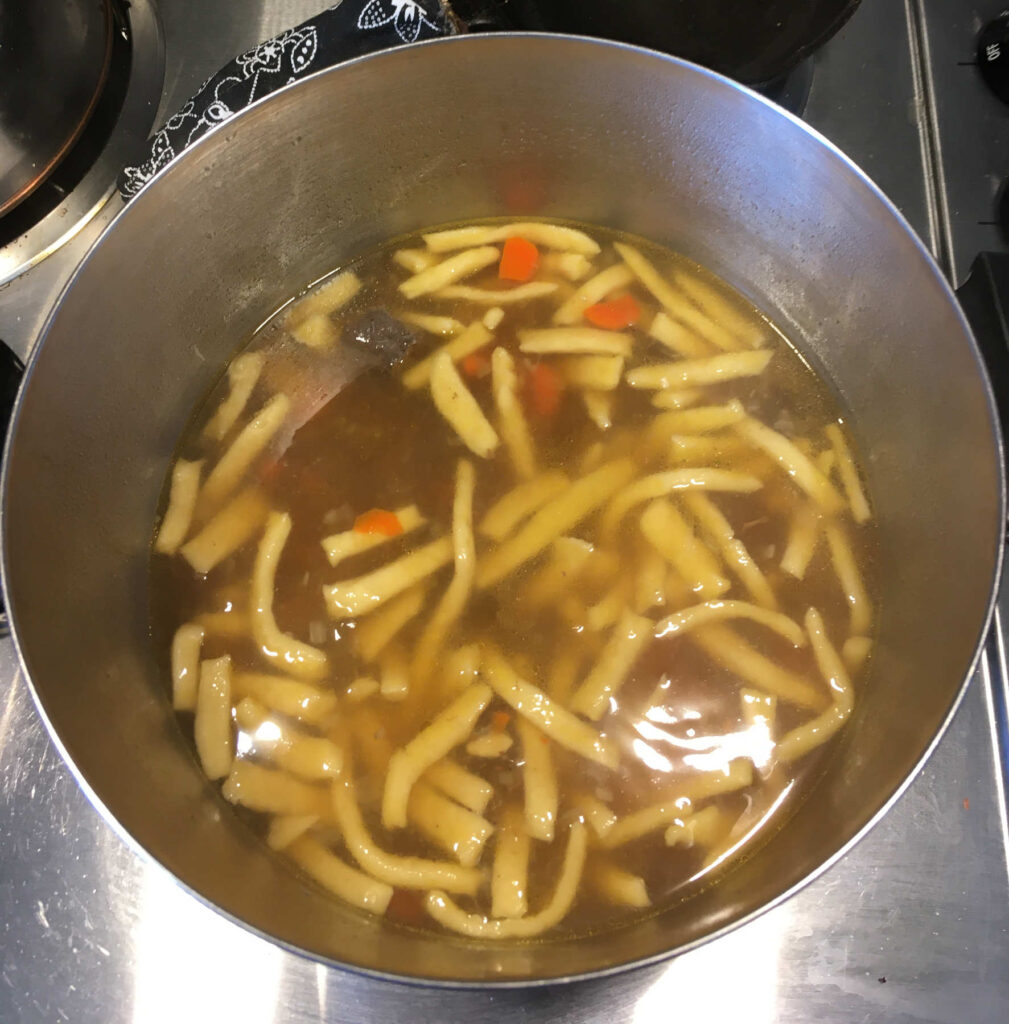 Many times, I have stated that genealogy is more than names, dates, and places. Genealogy is also a heritage of food. As with our other senses, the taste of food brings back the inner warm feelings we have from our past. It is important that we not only utilize the recipes of our ancestry, but also pass those tastes and cookery skills to our present and future family. The challenge I give to all of you is to mix up, roll out, and cut those homemade noodles for soup or pot pie; crisp fry some thin sliced scrapple and lace it with King Syrup; buy that head of cabbage and use it to make “good eats”; make that shoo fly pie with a molasses wet bottom and your own crust; and throw together the ingredients for a pot of chicken corn soup. Our Pennsylvania Dutch heritage appeals to all of our senses, especially taste!