Detail of a photo of Homer Hagenbuch milking a cow

How’s the Cow? It walks, it talks, it’s full of chalk. The lacteal fluid of the female member of the bovine species is highly prolific to the Nth degree.

Some readers of this article are immediately thinking, “Mark is grasping for an article. What do cows have to do with genealogy?”

A few weeks ago Andrew asked me what I thought of the cows we had on the farm. My immediate response was, “They were dumb!” He then proceeded to remind me of a video that appeared on Sesame Street in the 1970s entitled “Milk.” I remembered that video. Andrew and I brought it up on YouTube, and we watched it. The scenes brought back memories of my days on our farm in Montour County, Pennsylvania.

The tie in of cows to genealogy has to do with our family history of farming and dairy cattle. How many times have Andrew and I written: Genealogy is more than names, dates, and places? It’s all about people, what they did, their careers, their travels, their likes and dislikes, their hobbies, the foods they enjoyed, and their daily lives. Cows have a part in our Hagenbuch genealogy.

When Michael Hagenbuch (b. 1746) died in 1809 without a will, an inventory was completed of his estate. The inventory lists six cows, one bull, three calves, and an undetermined number of heifers and oxen. Also listed are “cow chains and sundries.” The cow chains lead one to believe that he was chaining the cows in the barn to milk them.

Similarly, when Michael’s son Jacob (b. 1777) died in 1842, he also did not have a will so an inventory was completed for his estate. Listed in the inventory are three cows. Finally, when Jacob’s son Michael (b. 1805) died in 1855, once again without a will, his estate inventory mentioned five cows and one bull. The cows are described as one being white, another brown, another brown with white face, one spotted, and one black. Also listed are 13 cow chains, again likely used for milking.

In Montour County where I grew up, most farmers had Holstein cattle—black and white, large cows who usually produced more milk than Jersey or Guernsey cows. As a boy, we would drive through the countryside. The fields were dotted with black and white cows feeding in the pastures. I suppose that is a lovely, bucolic sight to most. But, just like someone living in the city being used to large skyscrapers that produce awe in the country folk, the cows in the fields were just an everyday sight! 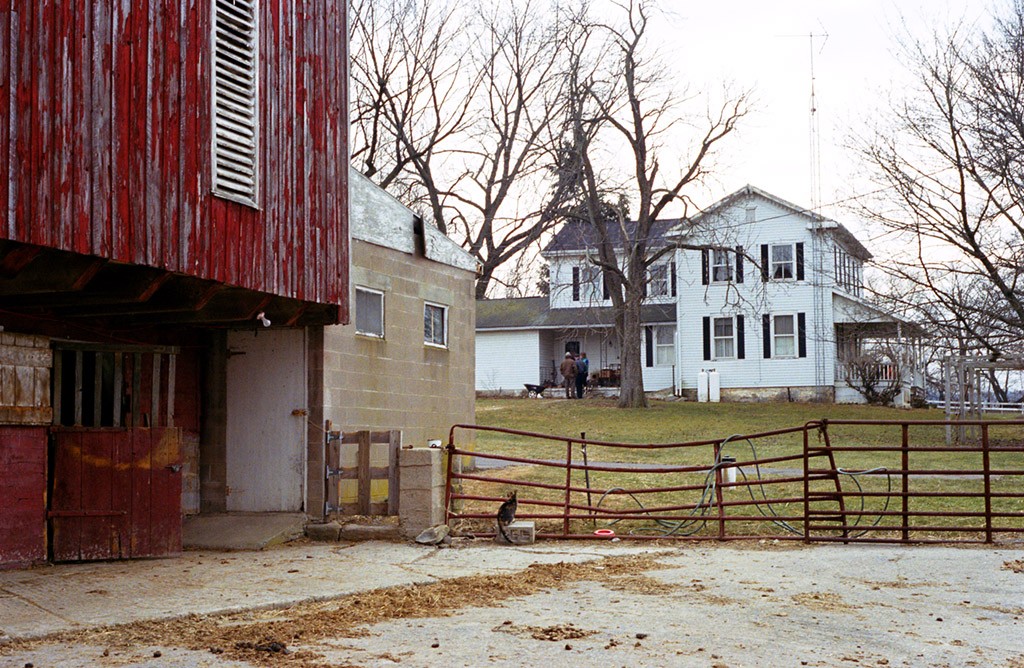 Yes, in my opinion, cows are dumb. We trained our cows, using much pushing, prodding, and shouting, to always walk into the same milking stall. And, when the cows heard the feed wagon coming or when they saw us going to the barn for milking time (morning and late afternoon), they would come lumbering into the barnyard. I don’t credit those two actions with much intelligence.

As the youngest of three sons of a farmer father, my job was to throw feed in the trough for the cows and hook their chains to the metal bars that they stuck their heads through. This made sure they could not back up and leave the barn while we were milking them. In our barn we had 10 cows on one side of the milking area and 7 cows on the other side. In between, there was a raised area about six feet wide, where you could walk and put the feed in the troughs in front of the cows. The cows were numbered with plastic tags on their neck chains. I remember that number two cow, mostly white, was very docile. I could hook her chain and she would keep eating away. I suppose one might state that she was a “nice” cow, but I can’t say that I ever thought she was cute or that I had any love for her!

By comparison, the number nine cow was a devil. In fact, she was almost all black. As I would slide down into the trough to hook her chain, she would repeatedly slam her head into mine. As a boy of eight or nine years old, I was deathly afraid of this beast. I had no defense against her as I got knocked around and slobbered on, that one big eye on the right side of her head staring at me.

Working around the cows to feed them, milk them, wash their udders, and so on, there were numerous times when I was kicked, stepped on, crushed between two cows, and even one time when I was leaning down to wash a cow’s udder that I got kicked in the mouth. Unfortunately, my mouth was open for some reason, and the hoof covered in cow feces made me rush to the nearest water bucket for a thorough rinse—YUCK! 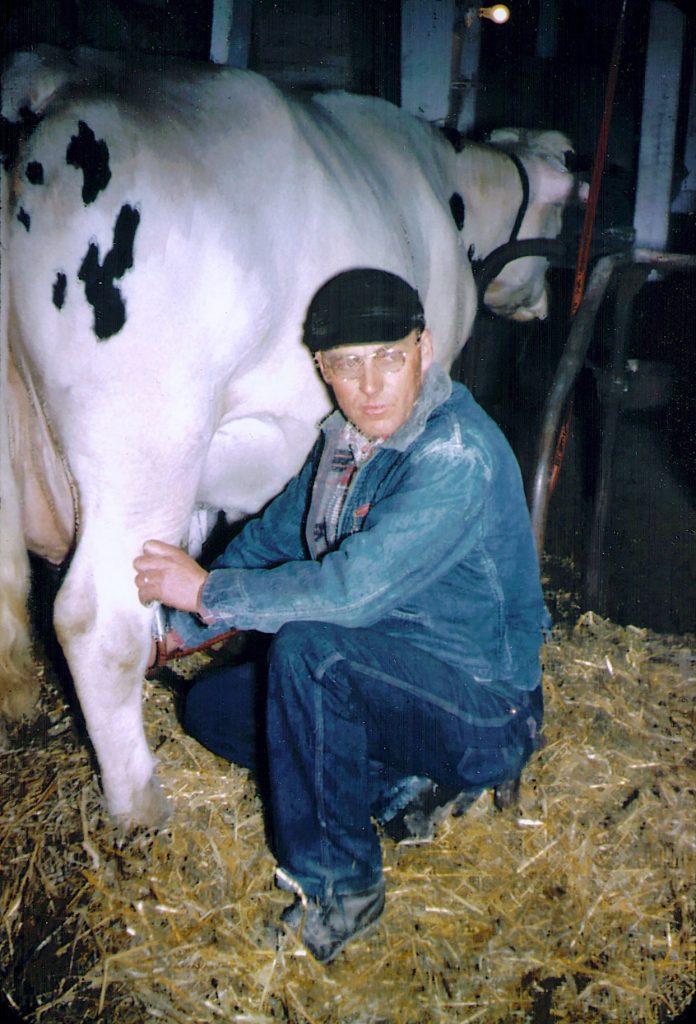 Alright, I will admit that the calves were cute, but not for long. A short time after their birth, we began to wean them from their mothers by feeding them a milk supplement, which was a powdered milk mixed with water. This was mixed in a bucket. Then, by putting one’s fingers in the calf’s mouth so they would suck, the nose of the calf was stuck in the bucket of supplement so they would begin to drink the milky substance. After doing this for a few days the calves finally learned to drink from the bucket. In their effort to feed, the calves would knock over the bucket, step in it, bump their heads against me as I was trying to get the bucket back in position for them to drink, and then usually I would step in calf poop which is even less desirable than a cow’s counterpart. Ah, the wonderful life of a farm boy.

I asked my siblings about their experiences with cows. My sister, Barb, remembers being afraid of the milk cows as they were very large. She also remembers the cows getting out at times. Most farm children remember the cry of, “The cows are out,” and the hurried response as we tried to herd these “intelligent” animals back where they had food and comfort. However, as Barb continued to remember, our mother would not allow her out in the barn much. She was the only daughter and, therefore, expected to work in the house. I suspect this was both a boon and bane!

When I told my brother, Bob, about this article and my opinion that cows were dumb, he disagreed and believed that they had some intelligence. He said he would look at this one cow and mimic her by making chewing motions. The cow would seem to get mad and shake its head, as if she knew Bob was teasing her. I think Bob was pulling my leg, as this is like saying “I saw a bird, I flapped my arms to mimic it, and the bird angrily flew at me.” Maybe that scene would make a good movie!

Bob remembered a lot of details about calves being born, that our stainless steel milk buckets were about 3 1/2 gallons in size, and that butterfat was tested periodically to determine the price our father was paid for the milk. He remembered the workings of the old milkhouse with a water tank to store the milk cans so they were kept cool. This was before we built the new milkhouse with a state-of-the-art bulk tank with paddles to mix in the butterfat. Sometimes, as he remembered, Dad would turn off the paddles so the cream would come to the top. Then, he would dip out the cream to make homemade ice cream—a Hagenbuch tradition. 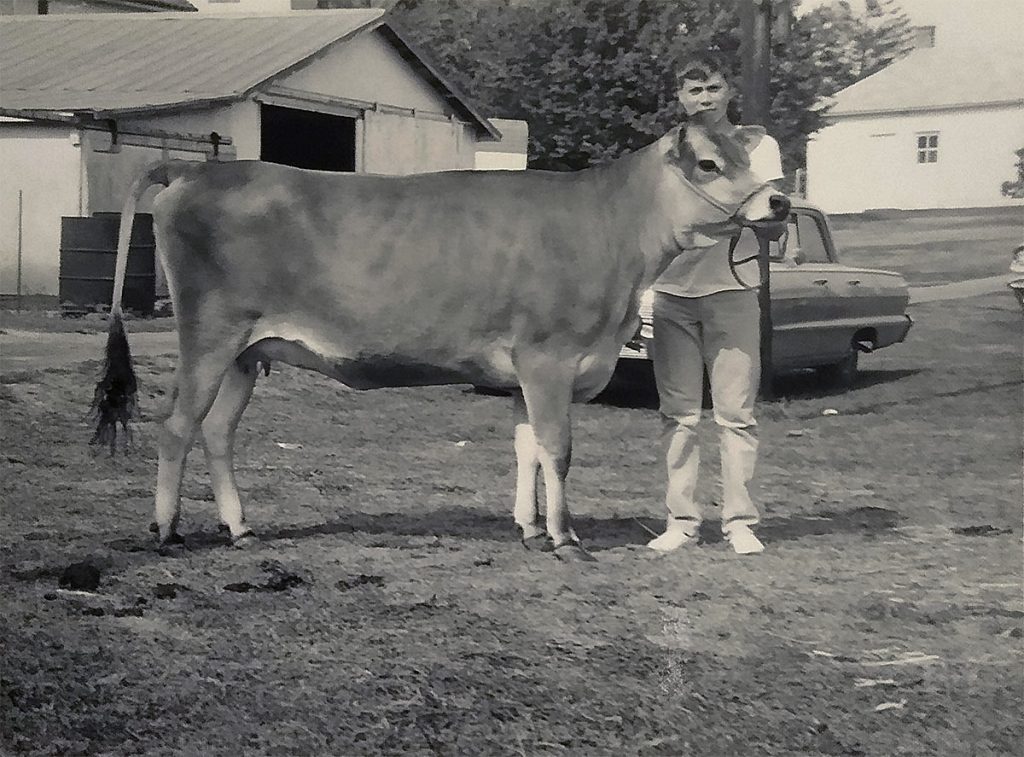 My brother, Dave, was very expressive about his experiences and wrote the following:

I always thought I would make my life’s work on the farm. That’s why I went into the Ag program in high school. I asked Dad for a different breed of cow when it came to showing at the local fairs. I think Bess [Dave’s Jersey cow] was the only Jersey in Montour County at that time. I enjoyed the activity and involvement of the whole cow/milking lifestyle, and I was content to follow in Dad’s footsteps. All the work that came with that was fulfilling in some ways, and I’m sure it made me a “better” person in the long run… It was hard work. But, I liked the “companionship” of the animals.

When I got Bess, Mom kidded me that she was my “first love” and I guess she was. She was a whole lot better than a puppy. We endured a lot. It was dirty, smelly, cold, hot, tiresome—all that and more!

Although my brother Dave expected to carry on the long family tradition of farming and having dairy cattle, he did not. In 1967 our father decided to move from the farm and Dave’s connection with the farm was gone. The Vietnam War was gearing up, and he enlisted in the Navy. But, he feels very lucky that he had the experience with the farm and milking cows.

To be honest, I feel the same. Yes, I still believe in no uncertain terms that cows are dumb. But, that doesn’t make them any less important. I would never trade the experiences that I had on the farm. Along with being around animals, playing in the hay and straw, and riding tractors and wagons, I enjoyed showing my father that I could do the hard work like my brothers.

The last year on the farm I was old enough to start the milking process in the evening by myself. Dad and Dave would be out in the fields, and it was close to milking time around 5:00 PM. I would open the barn doors to the milking stalls, the cows would walk in, and they would find their places. I had already thrown feed in the troughs so they would stand there chewing away as I chained them all (including number nine). I could operate one of our Surge milking buckets, and when finished, I would split the milk between two of the stainless steel buckets, start the Surge milker on the next cow, carry the buckets to the milkhouse, dump them, and head back to repeat the process. I remember being proud when Dad would show up at the barn door and compliment me on beginning the milking for the evening all by myself.

Like many farm families, we always prided ourselves in hard work and being self-sufficient. That is a result of carrying on the traditions of our ancestors’ work on their farms, such as milking cows, growing crops, preparing food for the family, or keeping a clean and orderly home. As the doggerel at the beginning of this article states: the cow is highly prolific. Over several hundred years, cows have provided our family with experiences that elicit dignity, hard work, careers, economic stability, and for some, a warm feeling of animal fellowship. Hail to the cow and its tasty milk!