Bob and Mark Hagenbuch work in the homestead cemetery.

Last week, several Hagenbuchs made the journey to the Hagenbuch Homestead in Albany Township, Berks County, Pennsylvania, to clean up the family cemetery there. The cleanup has become a yearly tradition, and the group included me; my father, Mark Hagenbuch; and my uncle, Robert “Bob” Hagenbuch, who was visiting from Missouri.

The Hagenbuch homestead is actually comprised of two properties. The smaller lot contains what is believed to be part of a home built in the mid to late 1700s. The larger, which is still a working farm, contains the home built by Michael Hagenbuch (b. 1805) in 1851 and the family cemetery.

The air was cool and the sky blue, having only an occasional cloud to block the sun. It was a perfect beginning to the autumn season. We found the cemetery in good shape, though somewhat overgrown. My father, Uncle Bob, and I set about to remedy this. Using a sickle, hoe, and shovel we removed the worst of the weeds and debris. Within about half an hour the area was looking much better. 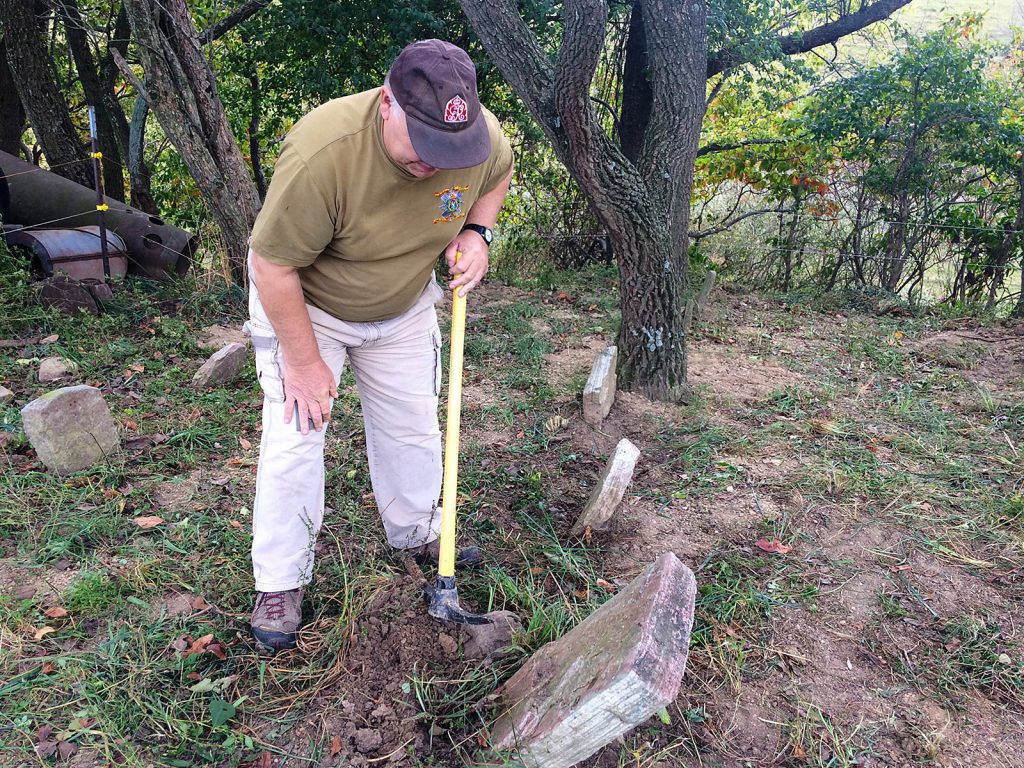 Mark Hagenbuch inspects a stone in the homestead cemetery.

Next, we worked to right any angled stones. We carefully dug around them using a pick and our hands. The stone located to the right of Jacob Hagenbuch’s (b. 1777) grave was of particular interest. While digging along the stone, we found other rocks that had been placed below it for support. We reset these, righted the main stone, and back-filled the dirt. All the while, we spoke of our ancestors, shared stories from Hagenbuch.org, and discussed who is and who might have been buried in the family plot.

In 2018, while cleaning the cemetery, we uncovered one new stone and then found the missing top piece of another. This year we arrived hoping that there might be at least one exciting discovery, although this was not to be. After a few hours of work, we packed up our tools and admired our efforts to preserve the graves of our earliest Hagenbuch ancestors in America. 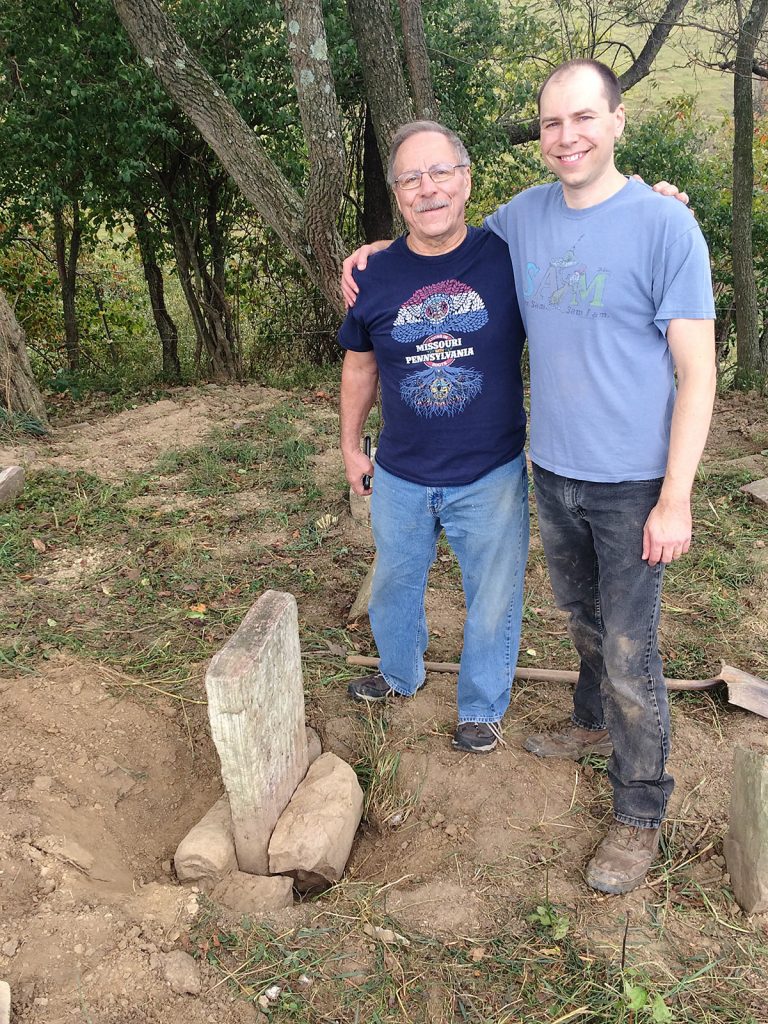 After briefly visiting the second homestead property, we made one final cemetery stop. This was to see the Hagenbuchs who are buried at New Bethel Church just down the road from the homestead. While the earliest Hagenbuchs were buried in the family plot on the farm, later generations were placed at the church’s cemetery. New Bethel Church sits on a small hill overlooking the beautiful, Pennsylvania countryside.

The three of us wandered through the stones looking for Michael (b. 1805) and his brother, Timothy (b. 1804). Along the way, we found two small stones marking the graves of children. The first was that of J. B. Hagenbuch, who was born and died in 1843. Enoch Hagenbuch’s history tells us that J. B. was a daughter of Michael and his wife, Abigail. However, J. B.’s first name is lost to time, as Enoch never mentions it. 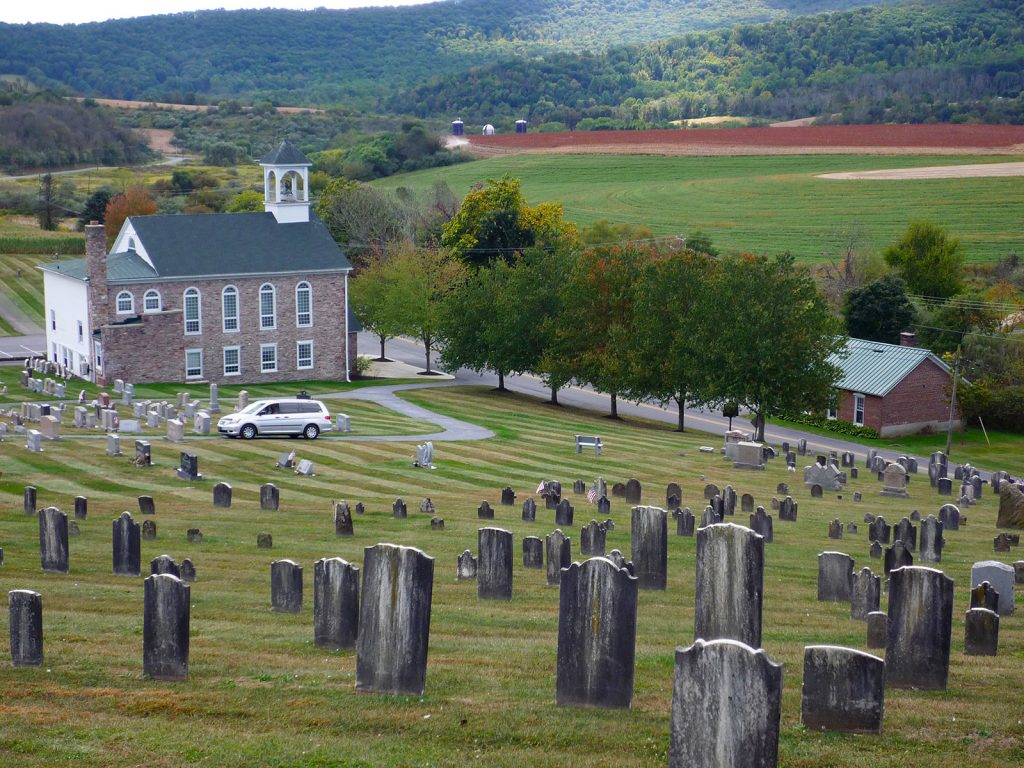 The second was the stone of Matilda Hagenbuch, who was the daughter of Charles (b. 1819) and Julia Hagenbuch. Again, Enoch tells us something about Matilda, describing how she died of severe burns in 1849 at the young age of three.

Visiting the Hagenbuch Homestead and cemetery is always a treat for my father and I. Though the day was without any major discoveries, it was an enjoyable time spent with family—both past and present—connecting with our Hagenbuch roots. 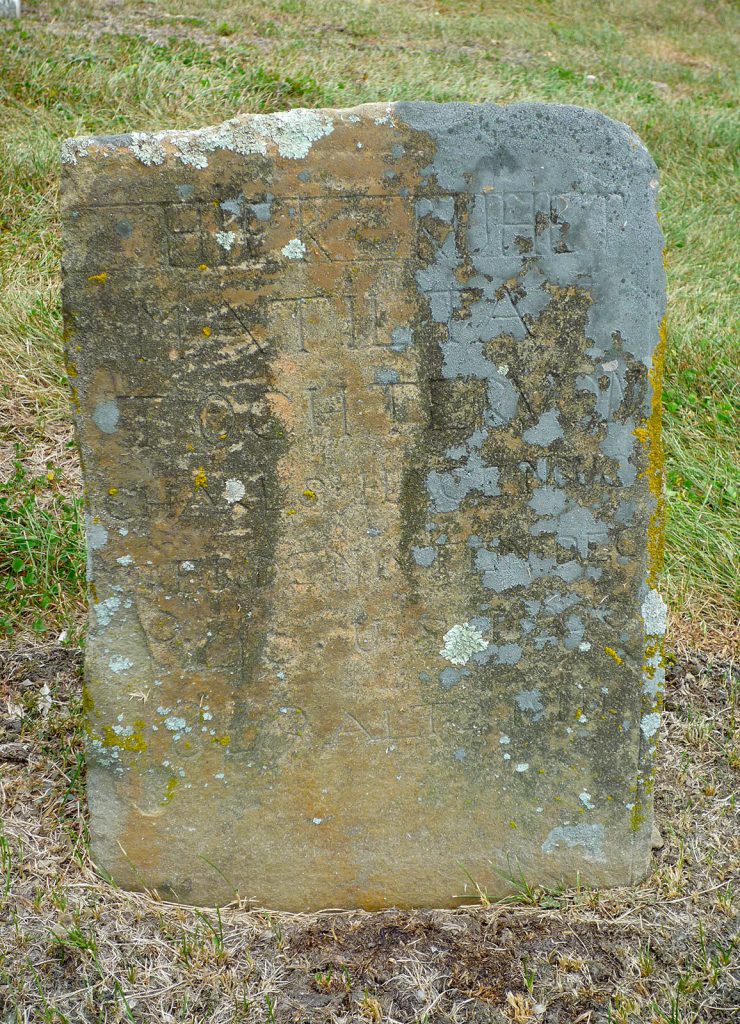