Detail of an photo showing men mostly from Able Company in Sainte-Marie-du-Mont, France on June 7, 1944

James H. Hagenbuch (b. 1922) parachuted into Normandy, France with the 101st Airborne Division on D-Day, June 6, 1944. A native of Mahanoy City, Pennsylvania, James had joined the United States Army in 1942. There he met Donald “Don” Burgett, who compiled his memoirs into the 1967 book Currahee!: A Screaming Eagle at Normandy. Burgett served with James in Company A (Able Company) of the 506th Parachute Infantry Regiment (PIR).

At the end of the last article, James, Donald, and some other men from Able Company were resting in a ditch at the edge of Ravenoville, France. Night had fallen. Their story continues on the morning of D-Day plus one—June 7, 1944. Read Part 1 and Part 2 in this article series.

As the sun began to rise, James Hagenbuch, Donald Burgett, and the other troopers welcomed the sight of American infantry walking up a hill. There were rumors that the D-Day beach landings had failed, and the men who parachuted into Normandy were stranded indefinitely behind enemy lines. With friendly troops spotted, the men of Able Company knew the rumors were unfounded, and the Allies had at last gained a foothold in France.

After roll call and breakfast, they headed south out of Ravenoville, towards their main objective at Saint-Côme-du-Mont. Almost immediately, they came under fire from two machine guns. Several German soldiers were blocking the road. But, the troopers had a trick up their sleeve. The day before they had captured an enemy half track, a type of armored fighting vehicle. Now, they used this to quickly eliminate the blockade.

Destruction and desolation were everywhere: broken trees, crumbling buildings, burning tanks, and craters in the ground. Yet, there were signs of life too. As the troopers walked along a field, they approached a woman pulling a cart full of milk cans. In exchange for cigarettes, she filled the men’s canteens. That morning, they passed through the villages of Foucarville, Saint-Germain-de-Varreville, Saint-Martin-de-Varreville, and Audoville-la-Hubert. There was sporadic enemy fire, though in many places the Germans were already routed.

Near the town of Sainte-Marie-du-Mont, the fighting intensified, and they saw more American troops—alive and dead. In his book, Burgett specifically mentions seeing a number of dead Americans who had been partially mutilated by the Germans. For the first time, he wished he were someplace else. The men of Able Company joined up with a few others from Easy Company. Together, they fought their way through the town and pushed out the enemy. 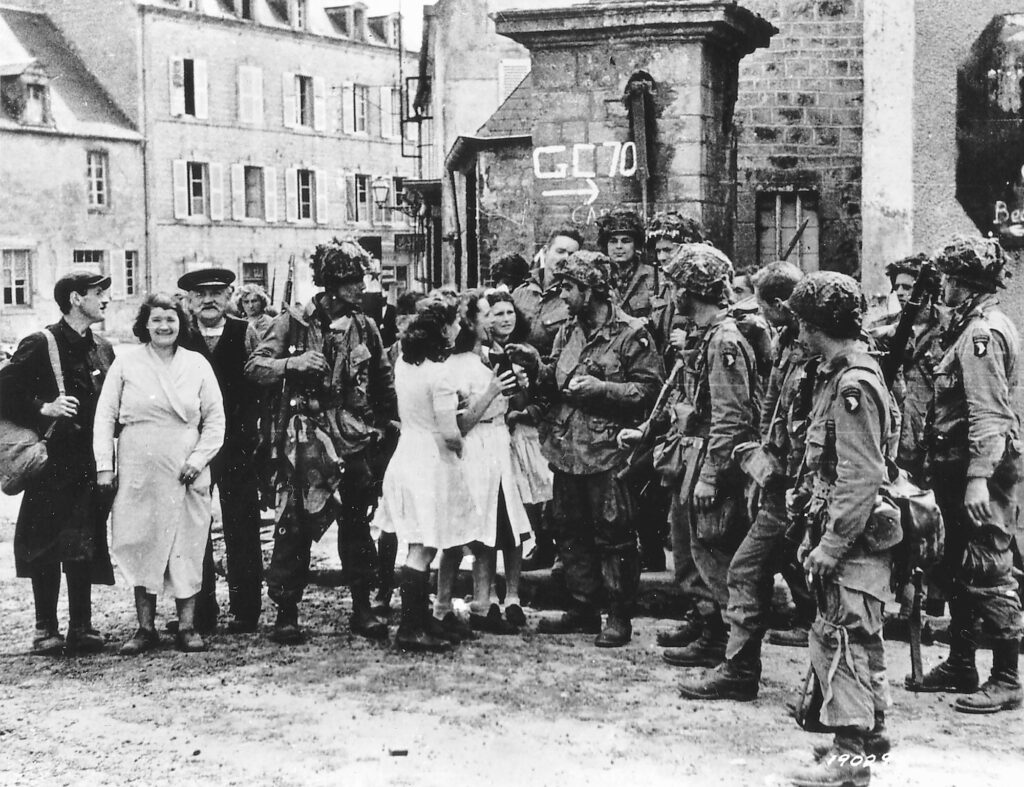 Troopers, mostly from Able Company, being offered wine in Sainte-Marie-du-Mont, France on June 7, 1944

During a lull in the fighting, the men stopped to fill their canteens at the water pump in the center of Sainte-Marie-du-Mont. A handful of French locals ventured out to greet their liberators. Embedded with the soldiers, a division photographer captured the moment just as three women offered the men wine. Years later, Burgett identified several of the faces in the picture. While he did not mention James, it is believed he is somewhere in this image, possibly on the right side turned away from the camera.

They continued to the next village, Vierville. At the outskirts of town, they encountered more troopers who were pinned down in ditches, avoiding enemy mortar fire. When timing was right, a commander yelled “Let’s go,” and the men drove through the town, attacking German positions in hedgerows and houses. Those who surrendered were herded together and marched back towards the beaches. 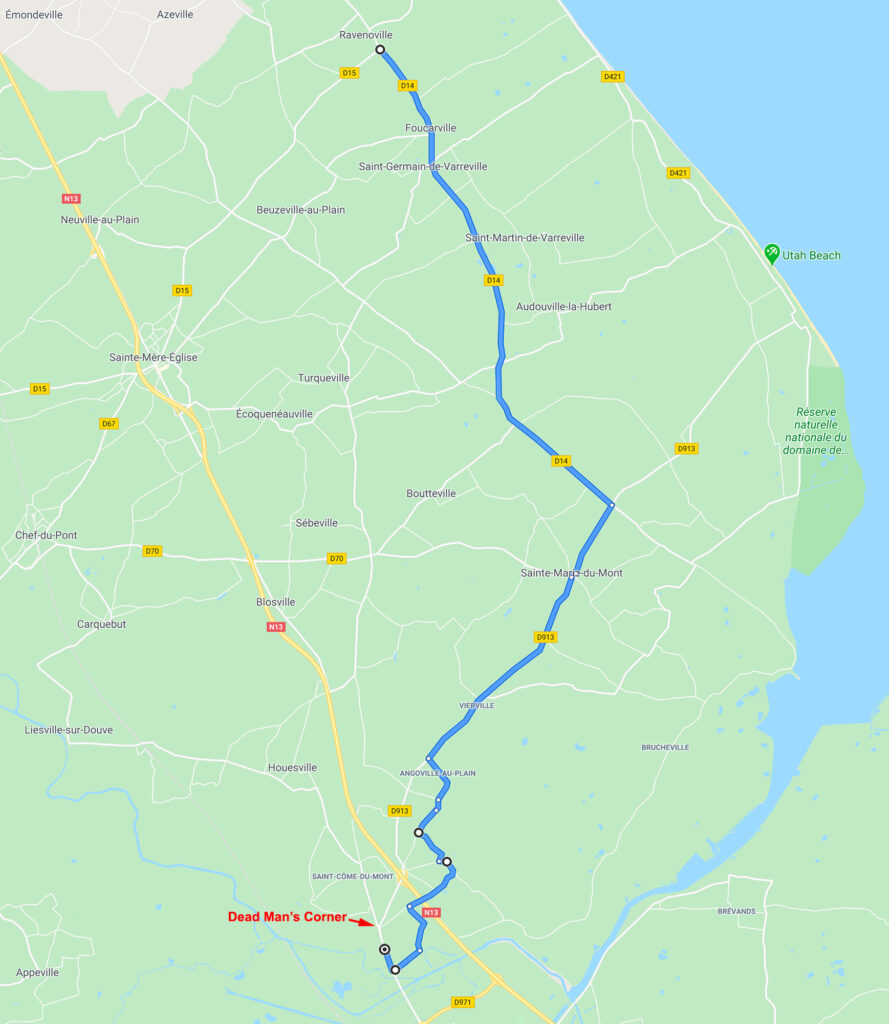 As the soldiers moved inland, the farm fields grew larger. Just outside of Angoville-au-Plain, the fighting again escalated, and a fierce battled ensued. Shells rained down from the sky as the Navy cruiser, USS Quincy, blasted enemy positions. Much to everyone’s surprise, horse-mounted cavalry appeared and charged the Americans. These were Russians who had sided with Germany against the Soviet Union and its allies. During the battle, Angoville-au-Plain changed hands multiple times.

Through the thick of the fighting, two Army medics, Robert Wright and Ken Moore, set up a makeshift hospital inside of a church. Here, they treated wounded men from both sides with the stipulation that all weapons be left at the door. The medics laid the soldiers on the church’s pews, staining them with blood, which can still be seen today.

The troopers were firmly in control of the village by the afternoon. Before moving on, they filled their canteens and ate some of their K rations. On the other side of Angoville-au-Plain, they engaged the Fallschirmjäger—an elite unit of German paratroopers. The fighting was fast and furious. However, the Germans soon withdrew and, in the confusion, the American were fragmented into smaller groups. 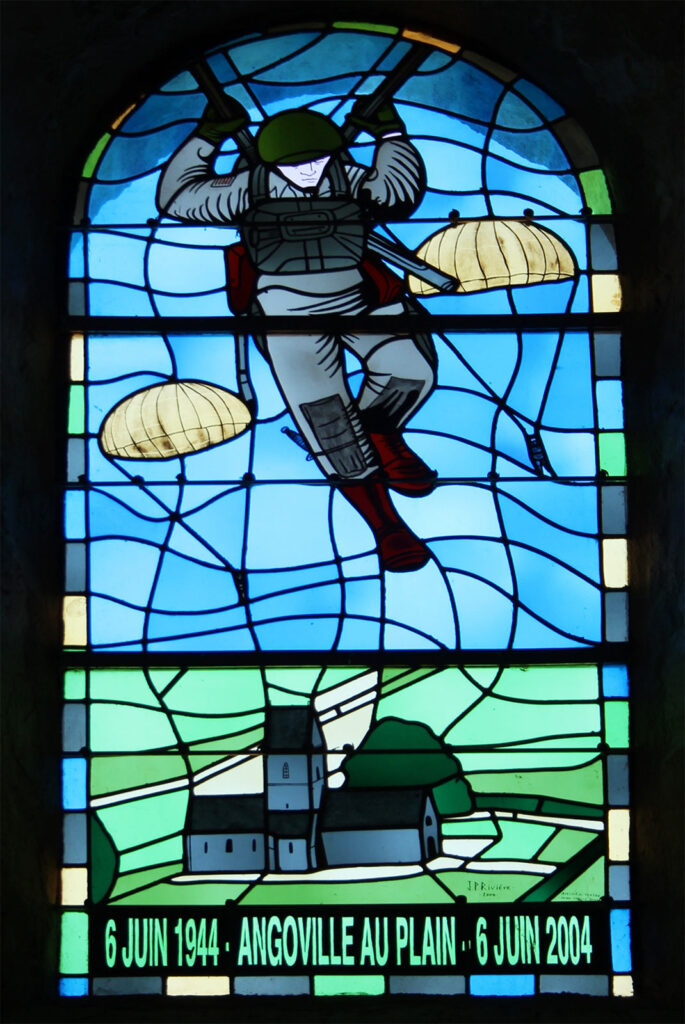 James and Donald found themselves with a few other men under the command of Staff Sergeant Sherwood Trotter. Running through green fields and along hedgerows, they approached the junction of two roads: one leading from Sainte-Marie-du-Mont and the other to Saint-Côme-du-Mont. At the intersection, an American light tank had been knocked out and a dead crewman was hanging out of it. This earned the crossroads the nickname “Dead Man’s Corner.”

The German troops were sliding down [a bank], running across the road, and climbing the bank at the other side. Hagenbuch was all for going after them and called to Hundley and me to bring the machine gun down onto the road where we could get clear shooting at them. Hagenbuch was dark haired, younger and smaller than me, and always laughing. Even now, he had a smile on his face. The little guy sure had guts. Some of his nerve must have rubbed off on me, for when he slid down the road bank, I was right behind him with the machine gun. Down on the road I opened fire with the gun … 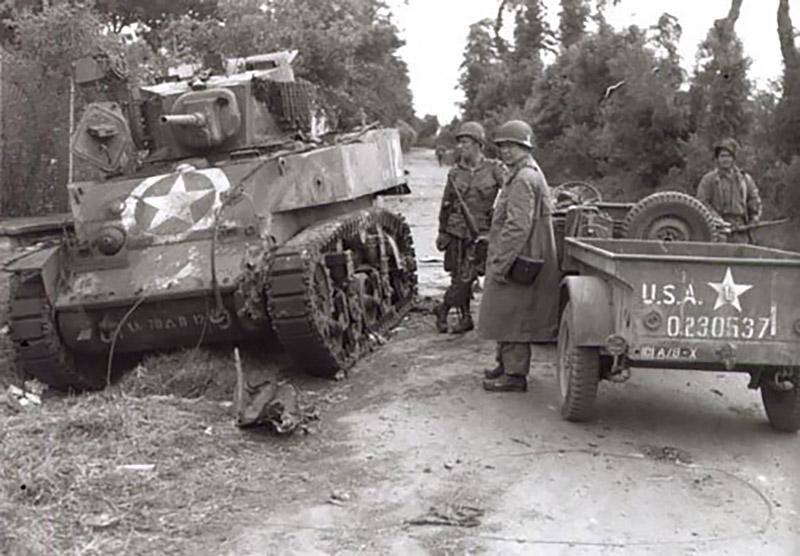 Soldiers surveying the light tank that was knocked out at Dead Man’s Corner, near where James and Donald engaged retreating Germans

With James feeding belts of ammunition, Donald fired the light machine gun—likely a Browning M1919A4. The Germans regrouped and began to return fire using small arms and later with machine guns. James and Donald were now in a bad position. The were in the middle of the road, right in the open, with embankments on either side. Yet, even knowing the danger, they kept firing at the Germans. Burgett continues:

There was another long burst from the enemy, and my machine gun jerked violently as bullets tore through the tripod and barrel jacket. Strings of bullets tearing past our heads made their familiar crackling sounds, but at the same time I heard a “plock” like sound, and Hagenbuch jerked backwards, then fell face forward. A bullet had passed through the top of his head killing him.

Private James H. Hagenbuch died the afternoon of June 7, 1944, just south of Dead Man’s Corner in Normandy, France. He was 21 years old. In his book, Donald Burgett mentions James one more time, the day after the Americans captured the town of Saint-Côme-du-Mont. He writes:

I went a little farther to the left and came to the place where Hagenbuch and I had shot it out with the Krauts and where Hagenbuch’s body still lay in the ditch. Looking down the bank, I counted twenty-seven dead Germans, and though these were the victims of my machine gun, the sight of Hagenbuch made this number seem small. 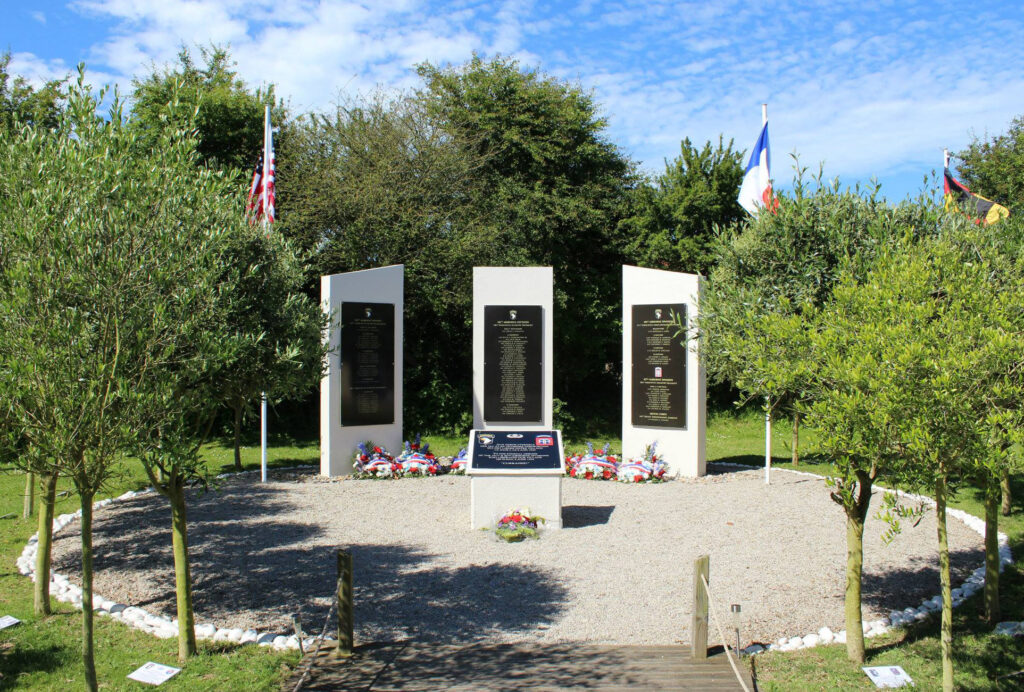 For his bravery and sacrifice, James was posthumously awarded the Purple Heart. He was temporarily buried in France. Later, his remains were reinterred with his mother’s side of the family, the Mulveys, in St. Canicus Cemetery, Mahanoy City, Pennsylvania.

In 2012, the Eternal Heroes Memorial was erected in Ravenoville, France to commemorate the troopers who liberated the town. Engraved in the center panel of the monument is the name “Pvt. James H. Hagenbuch.”

As discussed in Part 1 of this series, James Hagenbuch’s younger brother, Joseph (b. 1924), also served in the U.S. Army during World War II. He survived the war, and received a medical discharge in September of 1944. Some years later, when asked about his brother, he replied “[Jimmy] was the boy who never avoided a fight no matter the odds against him.” Considering Donald Burgett’s account of James, it was a fitting epitaph. 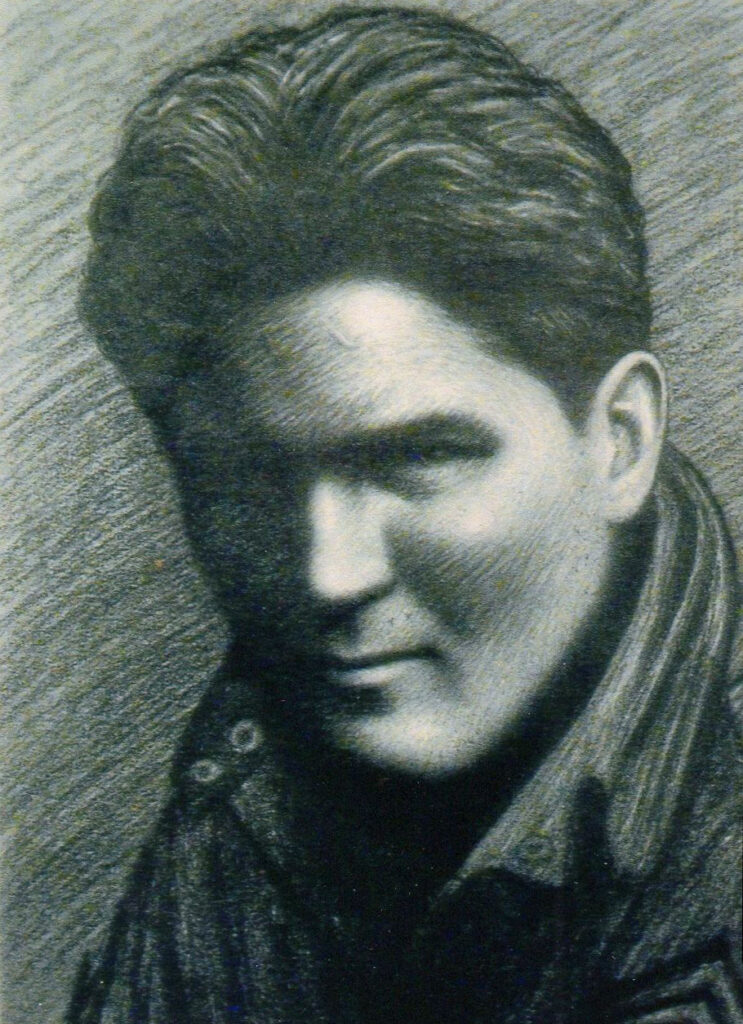 After the war, Joseph Hagenbuch went on to become a portrait artist. Although he typically worked in oil, he occasionally sketched his subjects, including one of his brother done from memory. In the decades following the war, Joseph was unaware of the exact events that surrounded the death of James. However, a chance meeting in the early 2000s changed that, and finally brought the family closure. To be continued…

Many thanks to Tom Kibler, Judy Cahoon Egan, and Doug Riley for their contributions to this article.