In the first part of this article series, my father, Mark Hagenbuch, introduced us to James H. Hagenbuch (b. 1922, d. 1944) and his family line. James, who also appears to have gone by “Jim,” seems to have had a tumultuous childhood. His father died when he was only seven and evidence suggests that his parents’ marriage may have been estranged. James and his younger brother, Joseph (b. 1924, d. 2016), went to live with their maternal grandparents in Mahanoy City, Pennsylvania.

Sometime before 1942, James, Joseph, and Alice were reunited and lived at 1510 Oxford Street in Philadelphia. On August 5th of the same year, James enlisted in the United States Army. His draft card and enlistment papers provide a number of interesting details. First, he was employed as a semi-skilled machinist at the Budd Company in Philadelphia, manufacturing steel parts for cars, locomotives, ships, and more.

He was also in the Pennsylvania National Guard, which he had voluntarily joined on December 8, 1941—the day after Pearl Harbor. Finally, he is described as having 3 years of high school education, weighing 146 pounds, possessing blue eyes with brown hair, and being 5 feet, 6 inches tall.

Workers at the Budd Company in Philadelphia, 1924. Credit: Hiddencityphila.org

After basic training, James qualified to become a paratrooper. Nicknamed “troopers,” these soldiers jumped into battle from planes, like the Douglas C-47. James trained at Camp Toccoa in Georgia, known for its proximity to Currahee Mountain, and Camp Mackall in North Carolina. In late 1943, he along with other troopers boarded a ship and set sail for the British Isles.

From here we have a good sense of what happened to James Hagenbuch, thanks to Donald “Don” Burgett, who compiled his memoirs into the 1967 book Currahee!: A Screaming Eagle at Normandy. Burgett served with James in the 101st Airborne Division as part of Company A (Able Company) of the 506th Parachute Infantry Regiment (PIR).

After an eleven-day journey at sea, the ship carrying James Hagenbuch and Donald Burgett docked in Belfast, Ireland. The troopers were then taken to a military camp at the Clandeboye Estate located in County Down. Here, they only stayed a brief time to get medical checkups and shots. The men, excited to be in Ireland, frequented the pubs and enjoyed many a good time with the locals singing, dancing, and drinking. 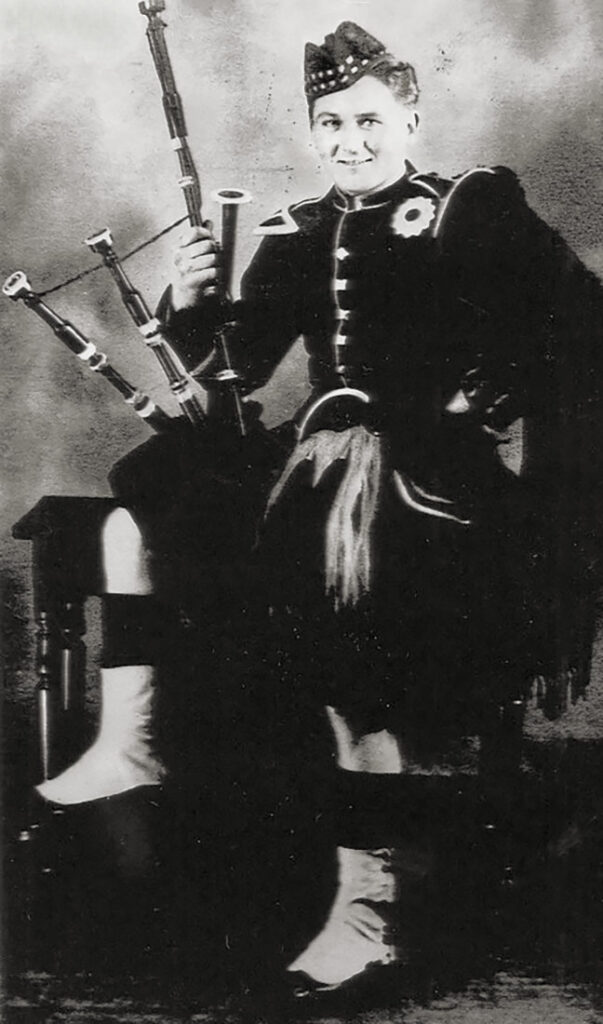 From there, they took a ferry across the Irish Sea to Scotland. It appears the above tourist photograph was taken of James during this time. The troopers next went to England and were stationed in the village of Aldbourne. At this location, the stables on a former estate had been converted into barracks. Corporal Jones welcomed the men to Able Company, 506th PIR of the 101st Airborne and showed them the screaming eagle patch that they would wear on their uniforms.

Now the real training began. The men of Able Company learned everything from filling grenades to functioning as a cohesive unit. They completed practice jumps at night and sometimes could see fires burning in the distance, a result of the German attacks on London. Burgett even describes how one trooper taught himself to deploy a machine gun mid-drop, so he was ready to fire shortly after hitting the ground.

In the spring of 1944, Able Company was sent to Torquay along the southern coast of England for maneuvers. The terrain included fields, hedgerows, and coastlines that were similar to what the troopers would encounter in Normandy, France. For several days, they fought mock battles in preparation for the real thing. Even with all the work, the men still had time for nights on the town, drinking, and carrying on with the locals. They returned to Aldbourne for a brief time and conducted more practice jumps. One of these occurred in the presence of Prime Minister Winston Churchill and General Dwight Eisenhower. 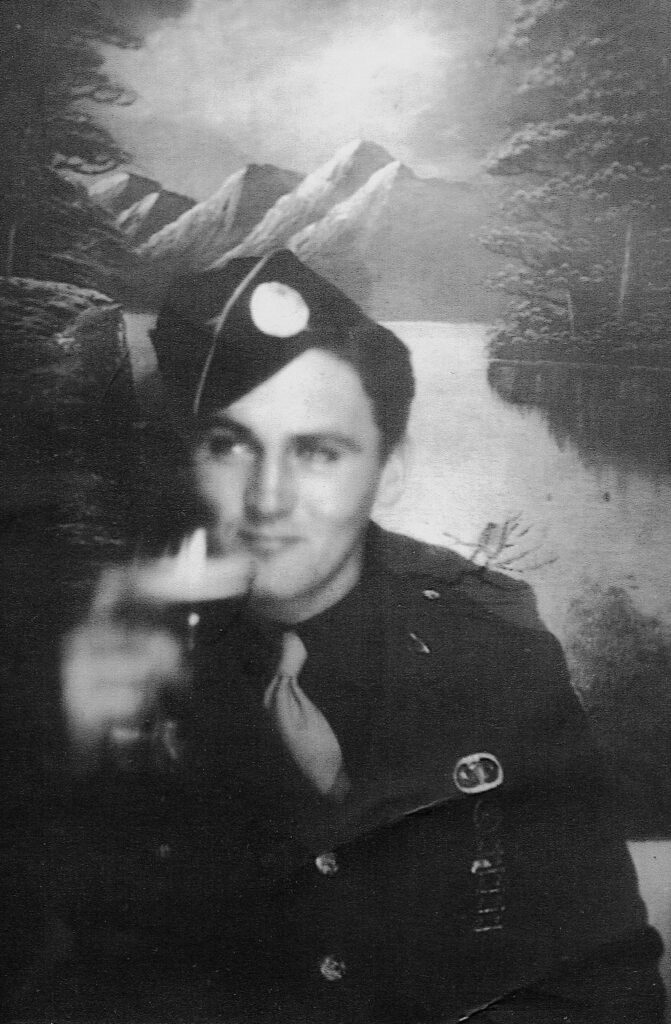 The next time Able Company headed towards Torquay, it was for the real thing. They were taken by truck to Honiton Airfield and were briefed about their mission—Mission Albany. This would be the first part of the D-Day operation, led under the cover of darkness by the 101st Airborne Division. They were to take and hold the French towns of Saint-Côme-du-Mont, Vierville, and Sainte-Marie-du-Mont, as well as capture the bridges leading to Carentan. Finally, they were to destroy causeways behind Utah Beach, cut German communication lines, and as Burgett describes it, “raise hell.”

On June 3rd, the troopers were issued escape kits including a compass, French money, and a metal “cricket.” The cricket would help to identify friend from foe on the field. The device was clicked once to challenge someone, who would respond with two clicks as the password. If needed, a verbal challenge of “Flash” could be said to which “Thunder” would be the password reply.

On June 4th, it rained, and the men waited anxiously for their orders. Some men burned paper and used the ashes to blacken their faces as camouflage. However, word eventually came that the mission had been postponed due to the bad weather. This only heightened the anticipation. 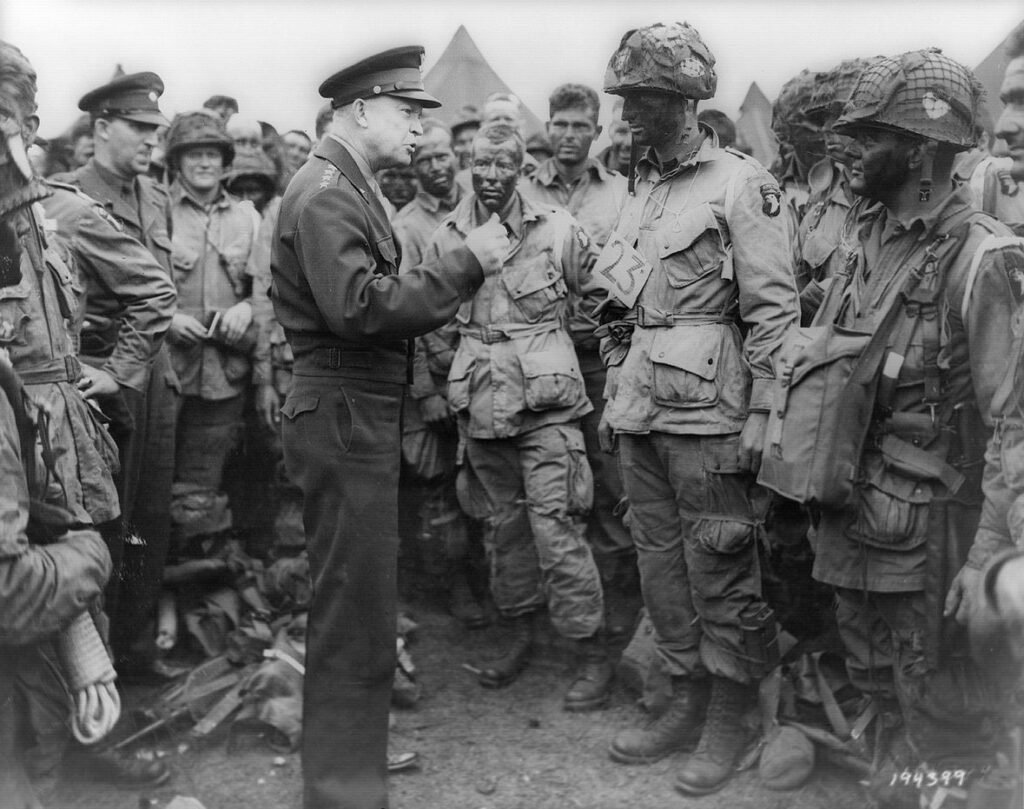 On June 5th, the weather improved, and the troopers knew that this would be the day. Burgett describes how they received a “last meal” of sorts—fried chicken with all the trimmings and ice cream. They could eat as much as they wanted. General Taylor and General Eisenhower made their way through the men and spoke to them. Able Company packed their parachutes, equipment, and supplies. Every man took enough ammunition for himself, as well as some extra for either the machine gun or mortar. At dusk, they loaded into the plane and were in the air by 10PM. D-Day was about to begin.

In his book, Currahee!, Donald Burgett describes the immense weight of the parachute, equipment, and pack each trooper carried. To lessen this, they knelt on the floor of the plane and rested their packs on the jump seats behind them. A reporter, embedded with the 101st Airborne, erroneously wrote the men were kneeling to pray. To the contrary, the men of Able Company sang “Blood Upon the Risers” as they made their way to France.

When the planes turned towards Normandy and approached enemy territory, the singing stopped. Now, each trooper quietly collected his thoughts amid the roar of the engines. Lieutenant Muir ordered the plane door removed and told everyone to hook up for the jump. Antiaircraft fire could be heard, along with the “tink” of shrapnel piercing the plane’s skin. Sometime between midnight and 1AM the green jump light flashed on. “Let’s go!” screamed Lieutenant Muir and the men of Able Company rapidly made their way out the door.

The troopers were supposed to jump from an altitude of about 600 feet, but according to some reports, the planes were flying lower than they should have been—perhaps as low as 300 feet. A few men hit the ground before their parachutes fully opened and died upon impact. Others were shot out of the sky by the Germans.

Both James Hagenbuch and Donald Burgett made it safely onto the ground, though they were not together at first. The men of Able Company were spread across a large area, and now faced the challenge of finding one another. It was dark, and the ground was wet. They were under constant fire and located within German occupied France. Fields, fences, and hedgerows created a confusing labyrinth. The D-Day beach landings were still a few hours away. 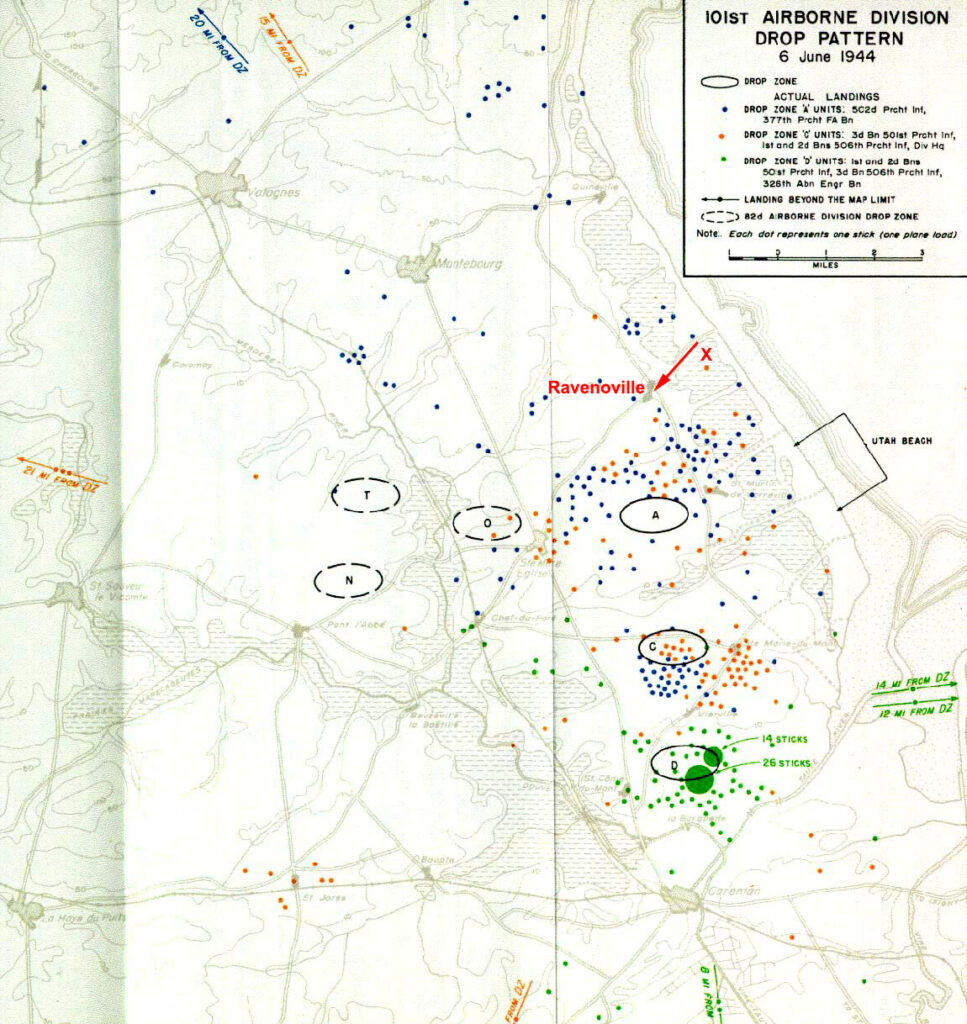 101st Airborne drop pattern on D-Day. The red X marks where James Hagenbuch and Donald Burgett are believed to have started the day. The red arrow shows their path to Ravenoville.

At first daylight, the troopers began to coalesce into groups, using their metal crickets to help identify each other. From Burgett’s account, it appears that he and James located Lieutenant Muir and entered the town of Ravenoville under his command. The men soon realized they were 8–10 miles away from where they were supposed to have been dropped. In the town, they encountered sporadic fighting and suffered causalities, though they were able to take it from the Germans.

By 10AM, the troopers felt comfortable enough to open their K rations and have breakfast. Several men went to patrol the area. Here, Burgett specifically mentions James:

Hagenbuch returned from scouting around the town and announced that he wanted a volunteer to go with him. He had run into a Kraut in a house while he was looking through a window. Hagenbuch jumped out of the window after him and chased him down the street. Even though the German was limping from his wound, he reached a church and ran inside just ahead of Hagenbuch. When Hagenbuch entered the building there were about twenty enemy soldiers in there, and they opened fire on him. He leaped back through the door and slammed it shut. “That’s a hell of a thing to do in a church,” he grumbled. Now he wanted someone to go back with him and kill those dirty bastards.

A first lieutenant driving a captured French two-man tank volunteered, along with two other troopers. They piled on top of the tank, the lieutenant gunned the engine, and they roared down the road with Hagenbuch pointing the way. An hour later, the tank returned with Hagenbuch lying face-down on the deck. He had just been stunned, but the other two troopers had been killed and the officer had a bullet in his neck. 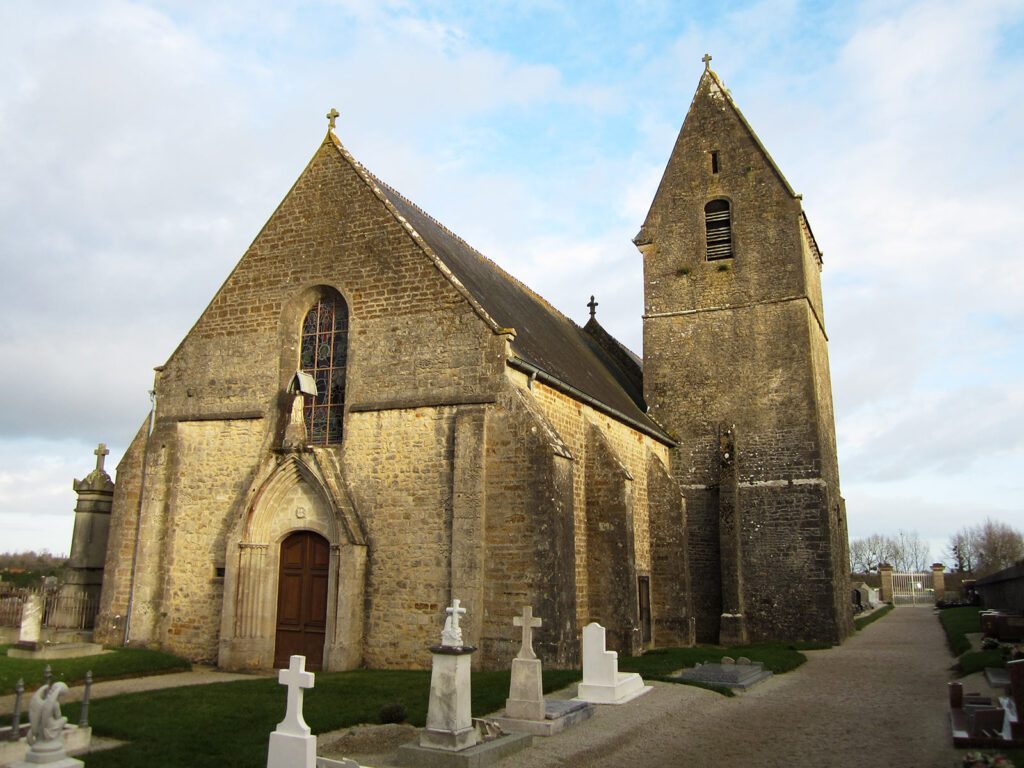 This incident likely occurred at the Saint-Gilles de Ravenoville church. Upon returning, James regained consciousness, and the troopers set up for the night in a ditch at the edge of town. Around midnight, they came under attack again, but fought off the Germans with no additional casualties.

James Hagenbuch had survived both the jump into Normandy and the first battles of D-Day, though just barely. Of the 22 men who began June 6th under the command of Lieutenant Muir, only 13 remained. To be continued…

Many thanks to Tom Kibler for providing information about the D-Day drop and to Judy Cahoon Egan for supplying the additional pictures of James.