Detail of an photo of Bob Brouse (left) and Larue Hagenbuch (right), 1938

After the 75th Hagenbuch Reunion, I was thinking about some of the contacts that Andrew and I have had over the years. The phrase “3, 2, 1, Contact” came to mind which was the title of a children’s TV show from the 1980s. I reversed the order of the phrase so that I could highlight three contacts I have had in the last few weeks, and how Hagenbuch.org has changed since we published our first article in October of 2014.

When we first began Hagenbuch.org in October of 2014, we were only known to a handful of relatives. Over the years, the site has become the number one result if you search “Hagenbuch” on the internet. Because of that we have relatives and non-relatives contacting us to give us information and to ask questions about the family. Of course, this leads us to widen the scope of our own research. There is nothing I like more than going down the road of our genealogical journey and veering off into a subject that I have never researched before. This happened recently with three contacts.

The first contact occurred about an hour before the Reunion began on June 18th. As I was setting up the display articles in the fellowship hall at St. John’s Lutheran Church, a young lady came through the door. I did not recognize her and apologized for this. She said, “Hi Mark. It’s Julie. Julie (Harris) Charleton.” Oh my! I was thrilled. Julie is a descendant of Samuel Hagenbuch (b. 1806), brother to my great great grandfather William (b. 1807). Her line is: Andreas (b. 1715) > Michael (b. 1746) > Henry (b. 1772) > Samuel (b. 1806) > Lydia (b. 1851, m. William Stahl) > Susan Stahl (b. 1880, m. Frank Harris) > Paul Harris (b. 1914) > Earl Harris (b. 1948) > Julie (Harris) Charleton. As my Hagenbuch clan through William moved to Montour County and became the dominant members at Oak Grove Lutheran Church, Julie’s Harris family (descended through Samuel Hagenbuch’s line) became the dominant members at Hidlay Lutheran Church in Columbia County. Hidlay is a Hagenbuch church, brothers Samuel and William being sons of Henry Hagenbuch (b. 1772) who was my 3rd great grandfather and Julie’s 4th great grandfather. Another connection: my father-in-law, Rev. Roy A. Gutshall, had his first charge at Hidlay Lutheran Church after graduating from Gettysburg Seminary in 1946. He knew the Harris family who attended there, and when my father-in-law was ill back in 2003, Julie was his physical therapist! 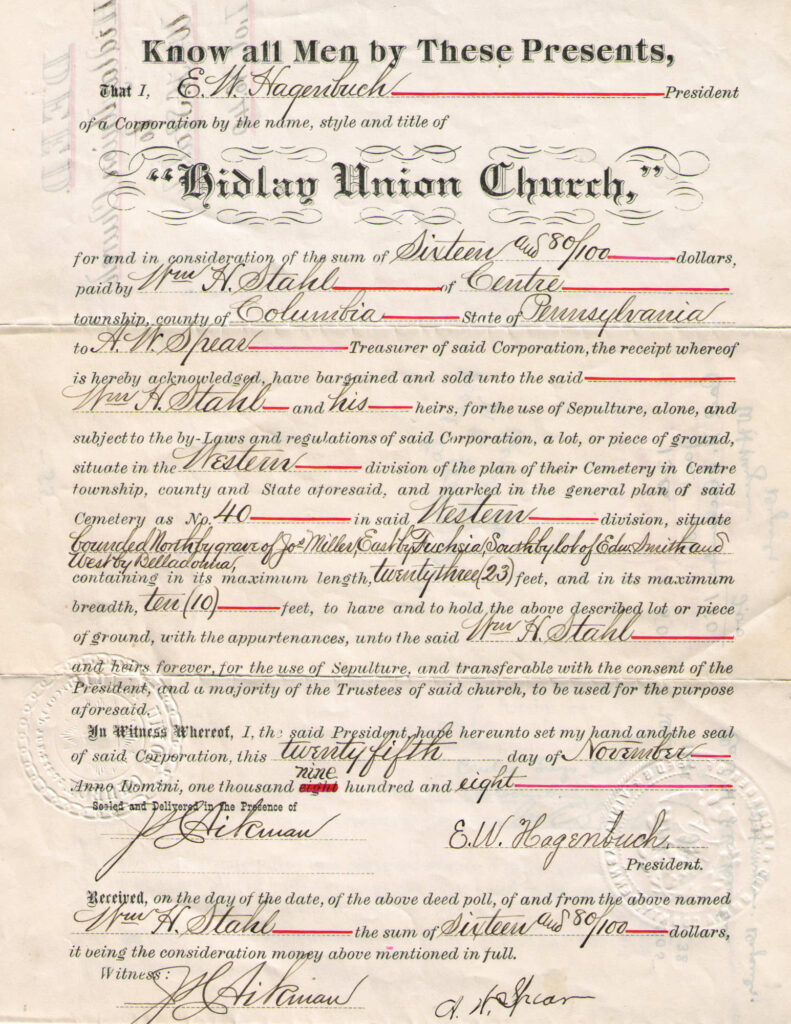 Julie could not stay for the reunion activities, but she gave me some genealogical ephemera, one of which was a deed to a lot owned by her great grandfather, William Stahl. I didn’t have time to look at this official deed until a few days later when Andrew and his family stopped by our home outside Dillsburg. I retrieved the fourfold paper deed dated November 25, 1908. Andrew and I took a good long look at it. It was a deed given to Julie’s ancestor, William Stahl, for a cemetery lot at Hidlay Church. William paid $16.80 for a burial lot, dimensions 10′ x 23′ accompanied by a description of its location: “bounded North by grave of Jos. (sic) Miller, East by Fuchsia, South by lot of Edw. (sic) Smith and West by Belladonia.” It’s interesting that two bushes were used as markers for this lot! I plan on a field trip to Hidlay to check out where William Stahl is buried in the cemetery and find what exists of this directional description.

One may think that this deed is not a very important piece of paper. But, there is more. The deed is signed by E. W. Hagenbuch. Elmer Wilson Hagenbuch was born in 1873 and, as indicated by the deed, was president of Hidlay Church when the deed to William Stahl’s cemetery lot was issued in 1908. Elmer Wilson died in 1942. He is not buried at Hidlay, but instead at Roselawn Cemetery in Berwick, Pennsylvania. When my wife’s father, Roy Gutshall, was minister at Hidlay in the mid-1940s he said he knew a “Big Elmer” Hagenbuch and a “Little Elmer” Hagenbuch.

Elmer Wilson Hagenbuch’s grandson was named for him, so the “Little Elmer” was this Elmer born in 1929. Big Elmer was yet another Elmer Hagenbuch. He lived beside my wife’s parents when they lived in Espy, PA as my father-in-law had congregations at Hidlay and the neighboring town of Espy. This was Elmer Elsworth Hagenbuch born in 1869. Elmer Wilson Hagenbuch (b. 1873) and thus his grandson “Little Elmer” Wilson (b. 1929) are descended from Andreas’ youngest son, John (b. 1763). “Big Elmer” Elmer Ellsworth Hagenbuch (b. 1867) is descended from Andreas’ second son, Michael (b. 1746). Thanks to cousin Julie from the Harris/Stahl/Hagenbuch line for providing a very curious piece to add to the Hagenbuch archives. Isn’t it wonderful that one piece of paper can lead us down the genealogical path from two of the patriarch Andreas Hagenbuch’s sons! 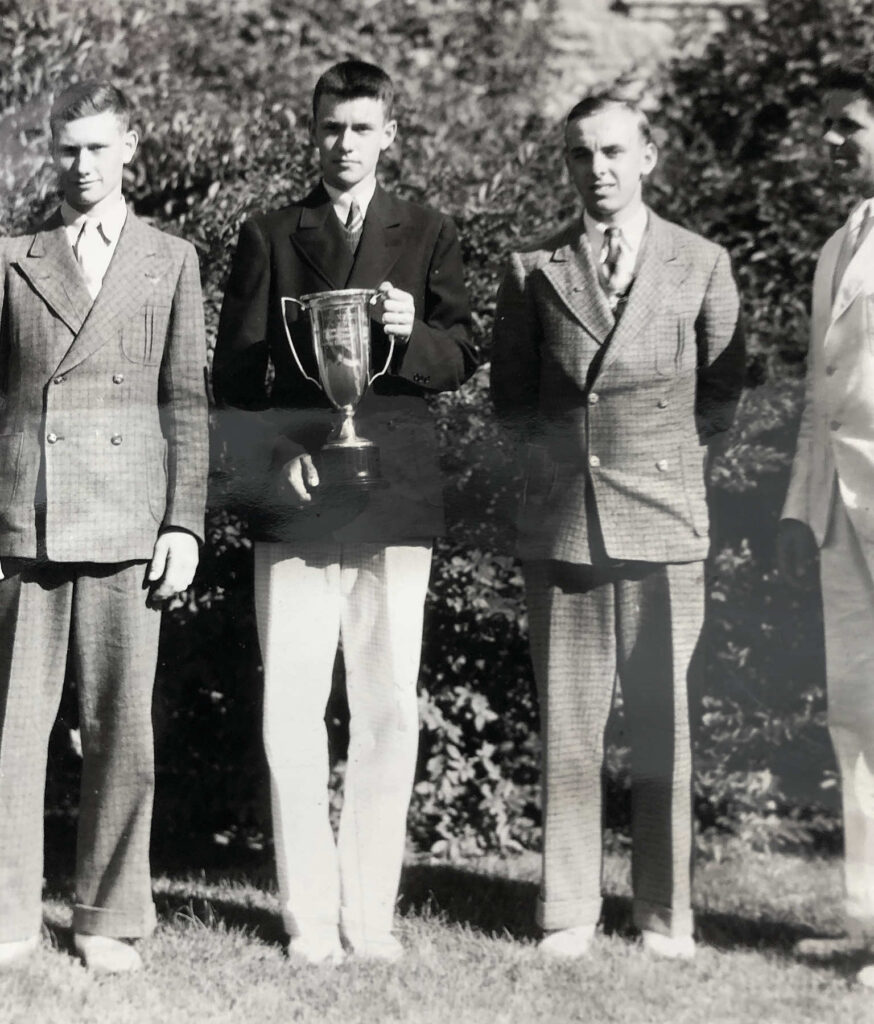 The second contact came from Emma Jane (Brouse) Foust. We received a message a few days after the reunion asking if we knew about her Brouse family, which had lived in Liberty Township, Montour County in the mid-1930s. As I mentioned earlier and have many other times, this is right up my alley. Time to get into the Ancestry.com census records and the Findagrave cemetery records! I called Emma Jane “Emmie” and we talked. It seems that her Brouse family knew of our Hagenbuchs because they had once lived nearby Oak Grove School which is across the road from the Hagenbuch church, Oak Grove Lutheran. Emmie even had a 1938 photo of her brother, Bob, with a man identified as “Larue.” Emmie sent me a scan of the photo and I knew immediately it was Raymond Larue Hagenbuch (b. 1922) who was a second cousin to my father, Homer. Emmie was born in 1936. Her brother, Bob, was killed in a tragic motorcycle accident in 1941. By that time they had moved from Montour County and were living in Northumberland County. So, Emmie (Brouse) Foust did not know our family; but upon seeing our surname, it did ring a bell.

Emmie’s contact with us also led me to research her husband’s family. As she told me, his Foust family was from Danville, PA. They are most likely not close relatives to our Foust family which is from MIlton, PA. However, I remember the Fousts from Danville and Washingtonville. Furthermore, she said that her father, Leonard Brouse, worked at a store near Oak Grove School and Church. My guess is that he may have clerked at the Lindner General Store between Pottsgrove and Oak Grove which was owned by the family of my great grandmother, Mary Ann (Lindner) Hagenbuch (b. 1853). Contacts and connections worked together once again.

The third contact is actually a multitude of contacts. A few weeks ago, I spent five days at Fort Loudoun, which is a rebuilt 1756 provincial fort west of Chambersburg, PA. I was there to represent my “home away from home”, Dill’s Tavern, which is owned by the Northern York Historical and Preservation Society of Dillsburg. I have been a member of the Society since 1987 and have served as president, secretary, Tavern Committee Chairman, and on the Board of Directors for many years. Our society is in the midst of finalizing plans to build an 18th-century distillery, a recreation of the distillery which the Dills and the subsequent owners, the Eichelbergers, continuously ran from 1750 to 1835. This is a monumental historical undertaking and, yes, we will be distilling rye whiskey as the Dills and Eichelbergers once did. I could go on and on about this project, but there is another point to make. 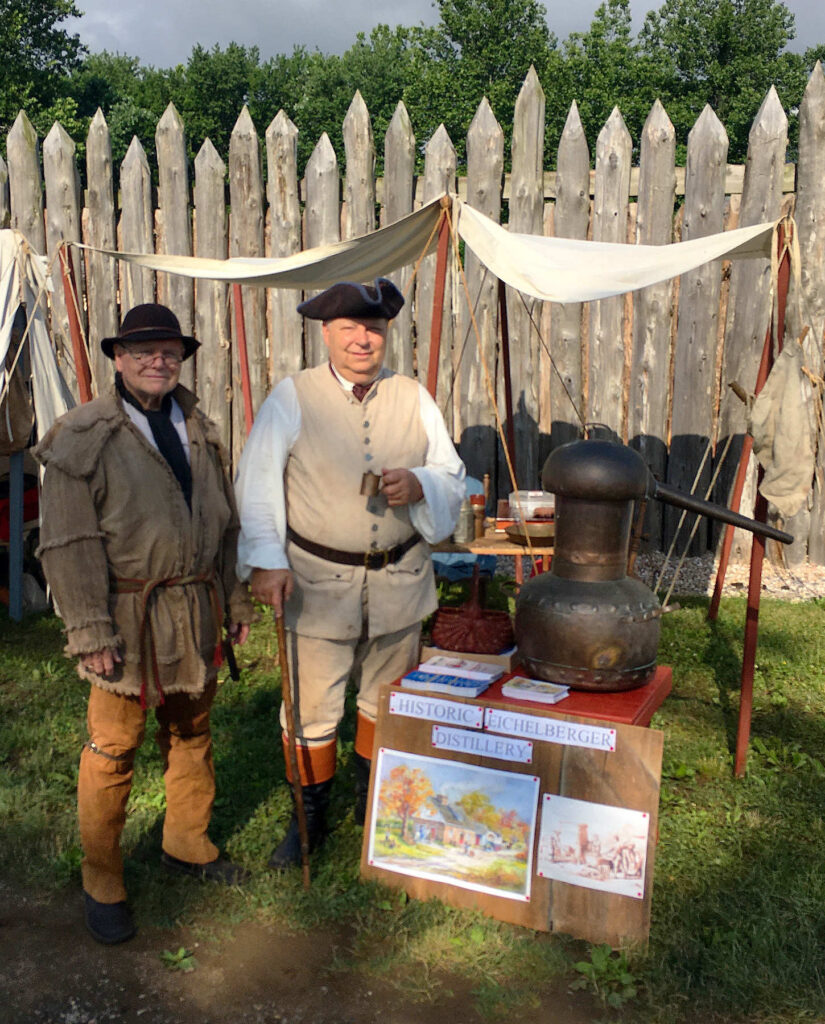 During those five days I had many, many people make contact with me. I was asked numerous questions about the display I had set up: an early 1800s pot still with brochures and a large artist’s rendition of what the 18th-century distillery building will look like. Many people asked why we were doing this. The answer I gave was partially about our own Hagenbuch family who were distilling whiskey, brandy, and other spirits in Berks and Northampton Counties during the 18th and 19th centuries. As I told the story of the importance of distilling at the Dill’s Tavern site, I would also talk about our family’s distilling experiences and ask people to “check us out” at Hagenbuch.org. Just like the history of the Dill and Eichelberger families, our Hagenbuch history is part of a unique American culture.

When I look back at past articles, much of what Andrew and I write comes from researching our own genealogical records using censuses and grave listings. But more and more people are contacting us and asking how they might be related or what connection their family had with the Hagenbuchs they once knew. The big picture of genealogy and its true enjoyment is bringing people from the past alive again. While most family histories are names, dates, places, and maybe a few related stories, our Hagenbuch family history continues to mushroom into factual stories with interesting details. I know that the number of people contacting us will continue to grow—1, 2, 3, 4, 5, ad infinitum!