My Dinner With: Aunt Katie and Uncle Perce

My previous dinners were with ancestors whom I had never met, ancestors who lived long before me. This dinner is with my great aunt, Kathryn (Hagenbuch) Roat, and my great uncle, Percy Hagenbuch. These two relatives I knew as Aunt Katie and Uncle Perce. Previous articles have been written about both people, who I remember from when I was a boy.

Aunt Katie lived up the road from our farm in Limestone Township, Montour County, PA in a beautiful stone house overlooking California Elementary School where I spent grades first through sixth. Before her death in 1961, she lived with her son, Paul, and his wife, Lulu. I remember visiting Aunt Katie and believe that we might have had one meal there, probably on a Sunday evening. Actually, it might have just been ice cream and cake. Possibly it was a birthday celebration.

The house was immaculate inside with Victorian-style furniture. The furnished rooms were much classier than other farmhouses I knew. I remember Aunt Katie as a short but well-proportioned lady of 80 years old. Her grayish white hair was pulled back with combs as was the style at the time, and she wore printed, calf-length dresses of dark colors or flowers. Most of all, I remember her smile, her kindness, and her being a nice, elderly great aunt. 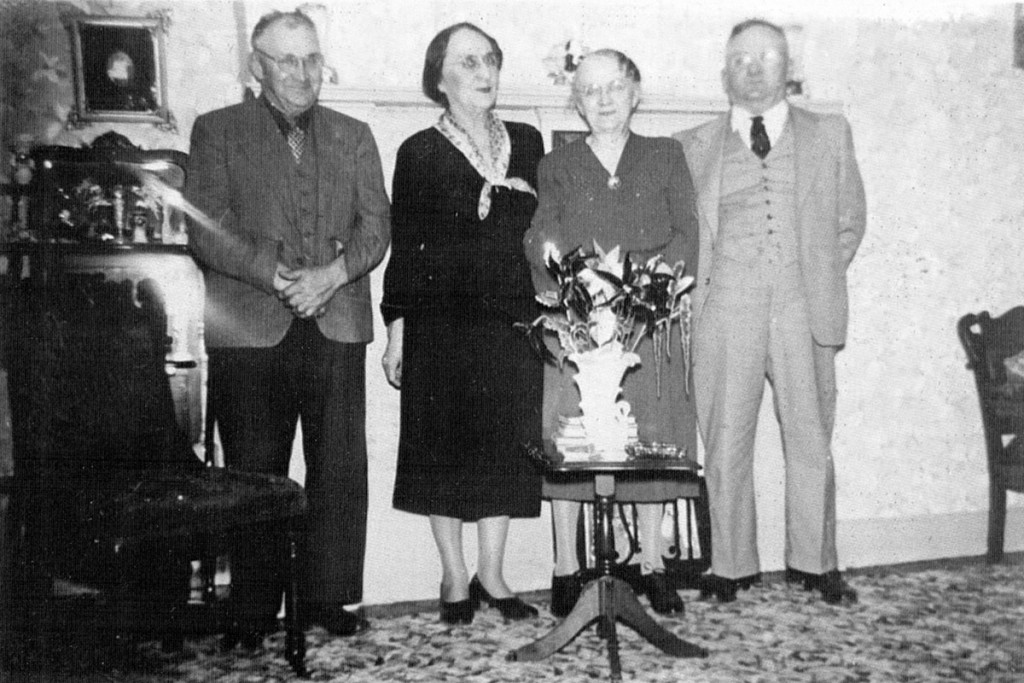 Kathryn Jane (Hagenbuch) Roat was the eldest daughter of my great grandparents—Hiram and Mary Ann (Lindner) Hagenbuch. Aunt Katie was born in 1879 and died in 1961. She married William Jacob Roat, “Uncle Will”, in 1902 and they had one son, William Paul, who was born in 1907. Uncle Will Roat died in 1932 so I never knew him. I remember some things about Aunt Katie, but with her death in 1961, I never had a chance to talk with her about family. Her son Paul died of diabetes in 1964, and I remember it was a tragic loss to the family as Paul was well liked.

Along with having a meal with Aunt Katie, at the same time I would also break bread with my Uncle Perce. He was the next in line of my great grandparents’ children, right after Aunt Katie. Percy Hagenbuch was born in 1880 and died in 1967. He married Gertrude “Gertie” Hill in 1902 and they had seven children. Aunt Gertie died in 1952 so I never got to know her. But I have fond memories of Uncle Perce, as he was a character—a man with a big personality who all the family enjoyed. I have written several articles about Uncle Perce and how he was the impetus behind my love of family history. However, I don’t remember ever having a meal with him, even though I was inside his home many times growing up.

From 1957 until his death, Uncle Perce lived with his daughter Mary (Hagenbuch) Beaver whose husband, Lester, died in that year. The house they lived in sits on a hill beside the farm that Uncle Perce and Aunt Gertie once owned. Uncle Perce built the two story house with a roomy front porch during World War II, and it is now owned by his great grandson, John Beaver. As a boy, I was in that house quite often to visit Uncle Perce in his later years because our family sometimes picked him up to take him to the family church, Oak Grove Lutheran. 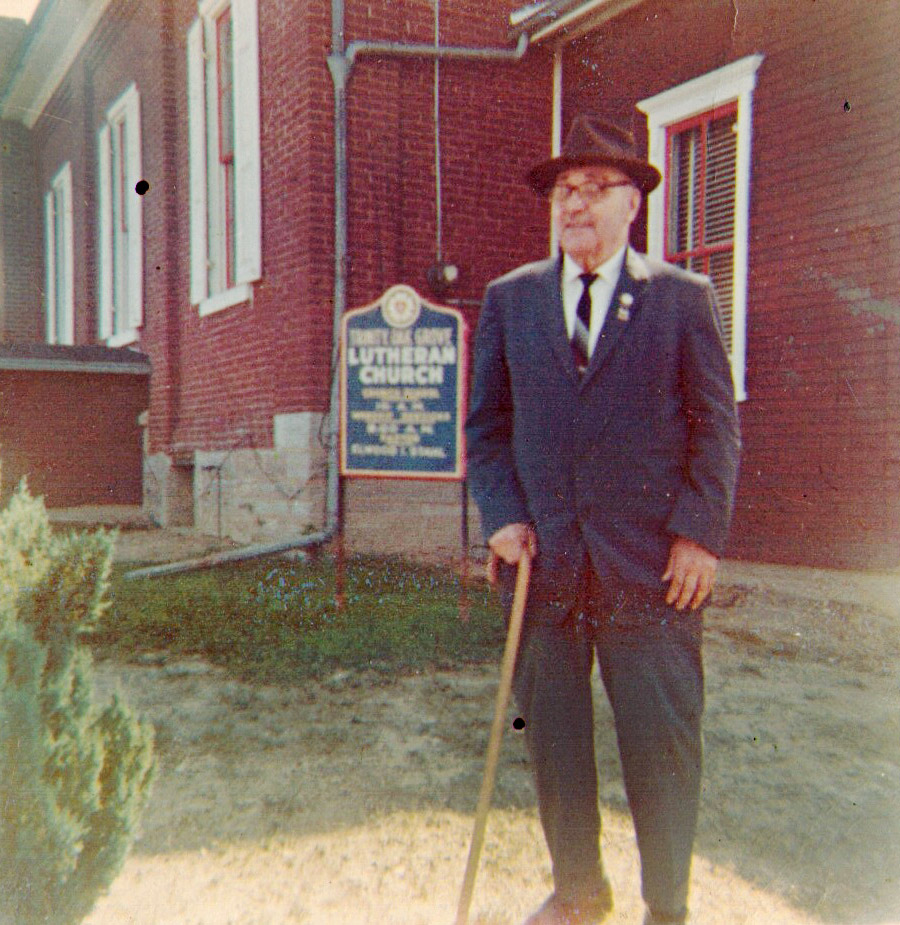 That brings me to the location and menu of the meal. I have selected to have my meal with this sister and brother, my great Aunt Katie and great Uncle Perce, at the Oak Grove Church festival in the year 1960. I am not sure how many years the church festival has been ongoing. I talked to my second cousin Fran (Hagenbuch) van Kirk the other day, and she wasn’t sure either.

This year, the year of Covid-19, the church had a soup sale instead of having the festival. Typically, at the festival many people would gather from the area to enjoy homemade foods that have been served since the event’s inception, possibly before the 1930s. For many years the festival was held in the parking lot of the church. But since the pavilion was built beside the one-room schoolhouse that sits catty-cornered from the church (where the 2018 Hagenbuch reunion was held), the festival has been held there using the utilities of the schoolhouse to support it.

The church festival would be an ideal spot to sit down with Aunt Katie and Uncle Perce to ask them questions which I have been curious about for many years, questions I wish I had asked before their deaths. I would sit across from them on one of the wooden benches, and we would order our food which would be placed on the wooden tables covered in butcher paper. So many memories flood back to me of the church festival as I begin to formulate the genealogical questions I would want to ask them.

Held outside in the gravel parking lot of the church, lights would be strung across the parking lot because the festival usually went on until about 10 PM. Up until the late 1900s the festival was always on the Saturday before July 4th, so the date for this festival dinner would be July 2, 1960. By noon on the day of the festival, things were really hopping in the parking lot. The lights were strung, as an electric stove was trucked outside to the makeshift kitchen located in the center of the wooden benches and tables where probably 75 or more people would sit to eat and socialize. Along with the stove would be a table with two roasters, one holding hot dogs and the other one filled with hamburger BBQ—a recipe still used by our family. Another table beside that would hold the rolls and other items. Still another table would have dish pans where the bowls for soup and silverware could be washed as no paper products, other than napkins, were used at this time. 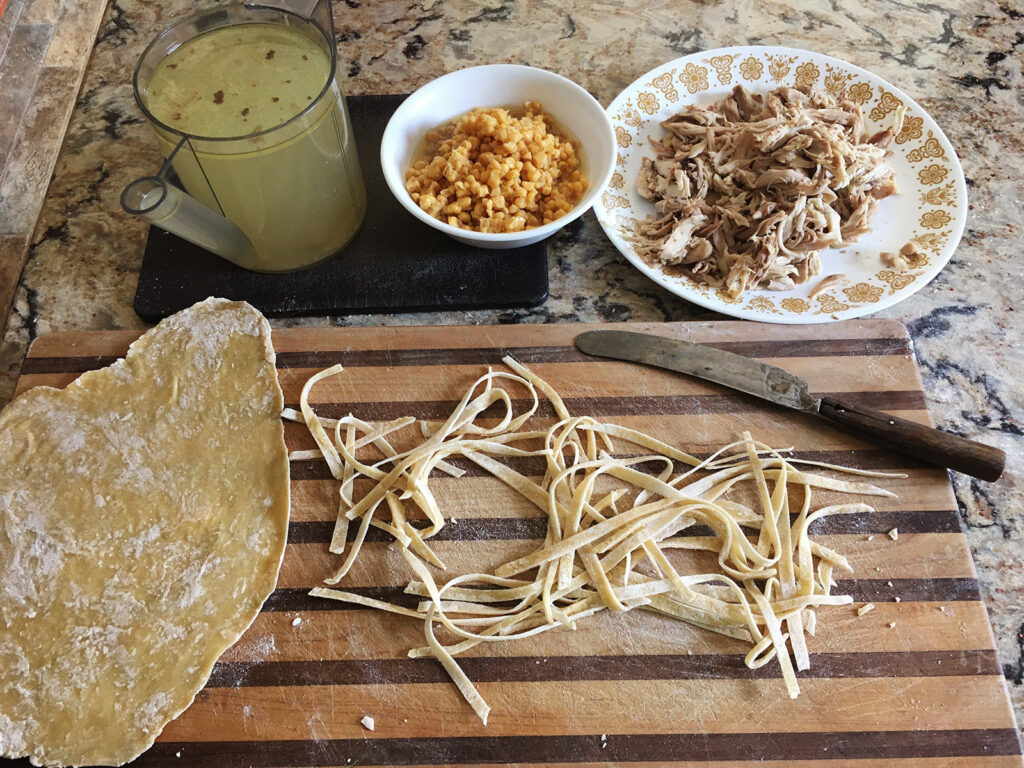 Soup and water were kept hot on the electric stove. The menu always consisted of soups made by the church ladies: chicken noodle, chicken corn, and vegetable. The noodles were homemade, and I remember my mother making piles and piles of them the morning of the festival. Condiments were spread out along the tables for the patrons. Desserts would mainly be homemade pies of apple, blueberry, coconut cream, and maybe even rhubarb! Ice cream would be in cones, dishes, or served as pie à la mode and came in three flavors: chocolate, strawberry, and vanilla. And beside the table laden with pies would be a table where the church council treasurer would sit with his tray full of money as everything was paid for in small change and small bills.

Along with coffee as a beverage, the always present soft drinks provided by Catawissa Bottling Company were kept ice cold in a large open tank filled with chopped blocks of ice. The most interesting flavor was birch beer which came in four colors: red, brown, blue, and white (clear). Although they probably all tasted the same in a blind taste test, the color gave the drinker a different sensation! Next to the soft drink area was the candy table. About the time I was eight years old, I was put in charge of the candy as my mother picked up the candy bars and other sweets from DeHart’s Candies located in the nearby town of Milton (DeHarts Candies is still there). Along with Mallo Cups, Three Musketeers, and Baby Ruths, were 3-color coconut sticks, candy cigarettes, Bazooka bubble gum, caramel cremes, and Mary Janes.

Sitting down with my great aunt and uncle, I would offer to pay for their meals. Aunt Katie might order chicken noodle soup. Uncle Perce might order vegetable soup and a hot dog. But, I would want a BBQ sandwich and chicken corn soup washed down with a red birch beer. Since I already know much about these two relatives’ family history from the time I can remember them, my questions would have a different slant—questions about their earliest years living north of Milton in a brick house close to the Susquehanna River and also living in the “house on the hill” which their father, my great grandfather Hiram, built in 1896. 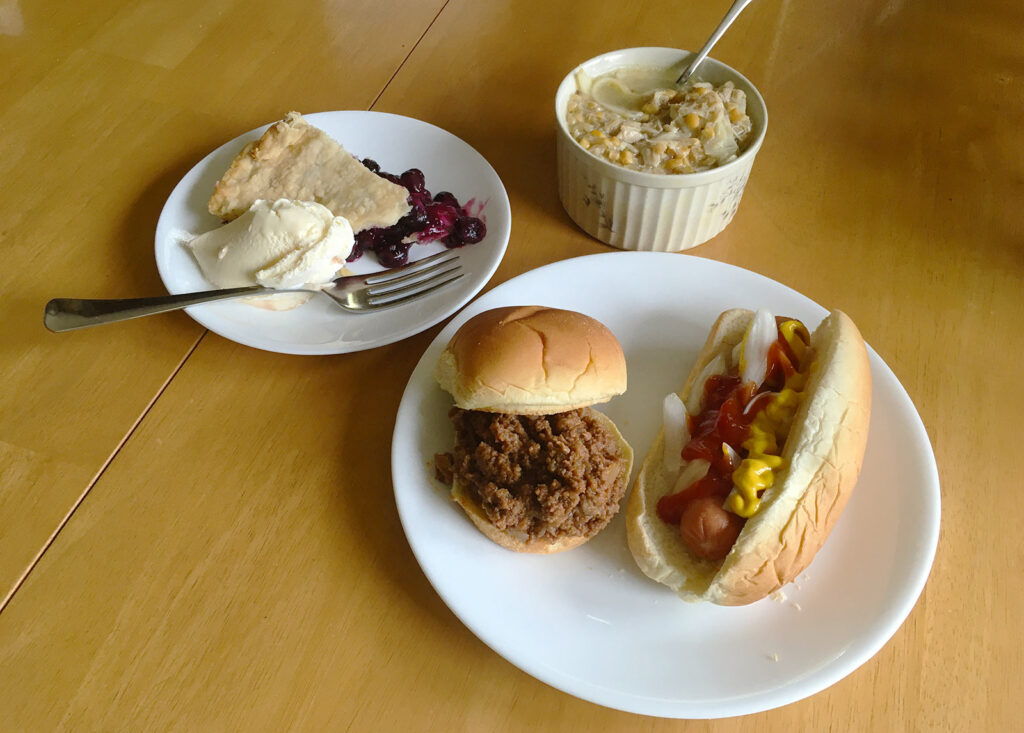 The first line of my questioning would be about that house closest to the river, a brick house that I remember standing in ruins in the middle of a field. One of the stories we had been told is that my grandfather Clarence, younger brother to Aunt Katie and Uncle Perce, was about to be born in 1889 when a flood caused my great grandmother to be taken out of a second story window (pregnant with Pap Pap Clarence). I would have questions about that house and it was like growing up there, since Aunt Katie would have been ten years old during that flood and Uncle Perce eight years old. In addition this would lead to a mystery which Andrew and I have pursued—the relationship of cousin Peter and Julia (Landbach) Hagenbuch to my great grandfather, Hiram. Peter owned the land that the brick house stood on. Did Hiram work for Peter? Did you, Aunt Katie and Uncle Perce, ever know Peter’s and Julia’s three children who are mysteries to us? Especially mysterious is their son, Harry, whom we know so little about. And, we are sure that your sister Julia was named for Peter’s wife, Julia. She attended a family party in 1894. Do you remember that party, and what type of person was this cousin Julia?

My questions would continue. What was your father (my great grandfather Hiram) like? We know so little about him (he died in 1897 when Katie was 18 and Percy was 16). I would be all ears to learn about this man who seems to have had a huge personality, strong work ethic, and drive to “be somebody.” What was it like to live in the new house on the hill? How sad it must have been to have your father Hiram die along with an older brother, Henry Bruce, within days of each other of typhoid. Tell me about the move you had to make after your father Hiram’s death to the old farm house near Oak Grove Church.

These and so many other questions would keep us talking for hours, taking us to the desserts at the festival which would be a slice of pie for each of us and maybe ice cream on the side. Darkness would then be upon us and the strung light bulbs would be in competition with lightning bugs. As mentioned, the festival would be wrapping up by 10 PM so that there would be enough time to clear away all signs of the festival. The parking lot needed to be available for cars, as the next morning would be church service. By 11 PM most everyone was ready to take off in their cars to drive to a hill overlooking the neighboring village of Millville where the best fireworks in the area would be shot off. But, by that hour on July 2, 1960, Aunt Katie and Uncle Perce would be snug in their beds.

Unfortunately, Aunt Katie died before I was old enough to have an interest in our family history. Uncle Perce would share some of what he knew with me before he died in 1967. My memory and his death certificate corroborates that he had a stroke several days after the 1967 festival, followed by an accidental fall, and then he lingered until July 30th. The vision of this imaginary dinner at the church festival is so vivid in my mind that it seems almost real, so real because these two relatives made an impression on me at an early age. I was quite fortunate to know them, but it is unfortunate that I never asked questions. This is a lesson the should be learned by all of us.