Mangoes and Molasses, Or Maybe Not!

A mango beside some molasses

Here is a riddle: When is a mango not a mango and a bottle of molasses something else entirely?

Earlier this month, I was on a video call with my good friend, Clint Shearer, whom I have known since elementary school. Clint mentioned that November 9th was National Scrapple Day. This led to a discussion of how best to eat scrapple and how his father, Carl, enjoyed putting molasses on it.

Having grown up in central Pennsylvania, I knew exactly what he was referring to. In this context, molasses is not the Brer Rabbit, Grandma’s, or Plantation brand dark molasses seen in the grocery store. Rather, what Carl drizzled over his scrapple was actually King Syrup, which has a certain following in pockets of the eastern United States. In fact, I have a bottle of it in the kitchen just to put on scrapple.

Though I never called King Syrup molasses, I knew people of my parents’ and grandparents’ generation did. This led me to believe that King Syrup must have some molasses in it. Flipping over the bottle and looking at the ingredients, I realized it did not. So, what exactly is King Syrup then? 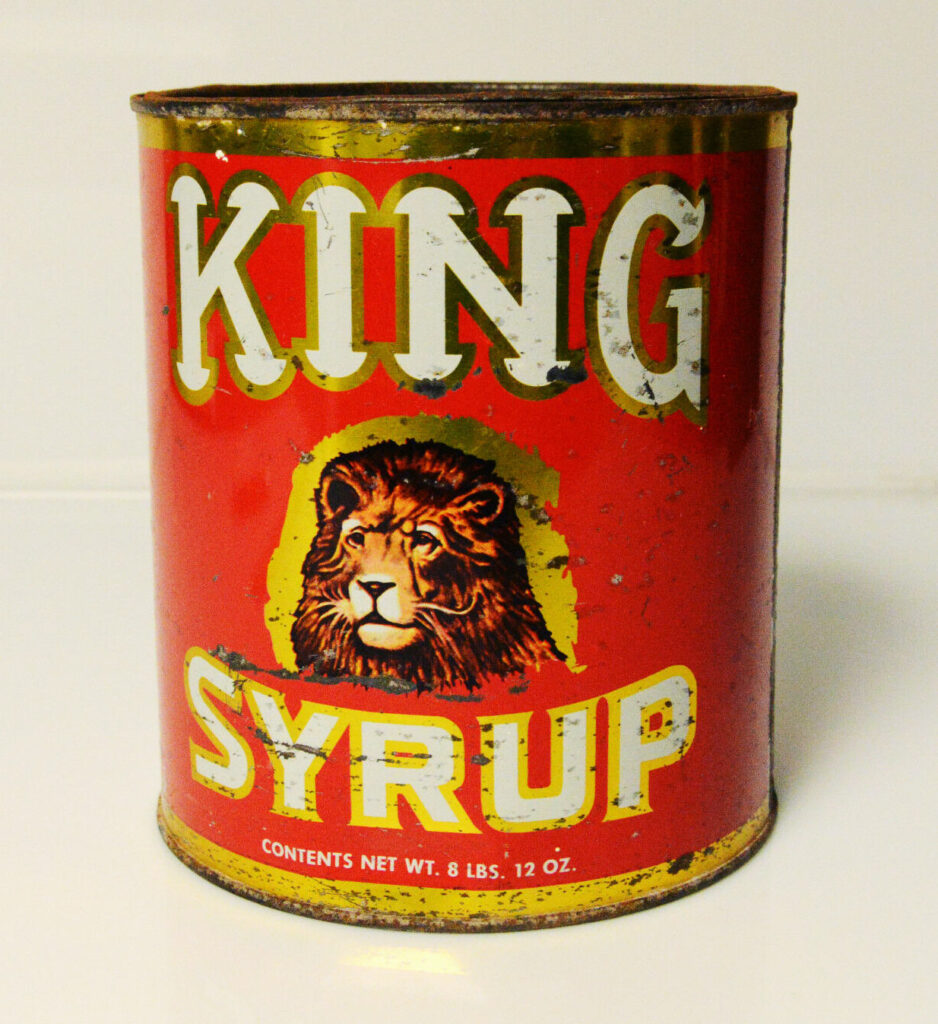 A King Syrup can, as it used to be sold.

King Syrup is a type of golden syrup and today is made using a blend of regular corn syrup, high fructose corn syrup, and refiners syrup. Golden syrups can be created in a number of different ways, including at the sugar refinery. More about this will be explained in a bit. The key element of a golden syrup is how it mixes together sucrose, glucose, and fructose to form a syrup with an amber color that has more flavor and a thicker texture than sugar water.

By comparison, molasses is a byproduct of refining sugar. After juice has been extracted from sugarcane or sugar beets, it is boiled and begins to crystallize. The boiled down mixture is run through a centrifuge to separate the raw sugar crystals from the syrup. Also known as “A molasses,” the light-colored syrup can be used to make golden syrup or the boiling process can be repeated to generate “B molasses” of a medium to dark color. From here, a final boil is performed on the syrup to create the darkest “C molasses,” which is commonly called blackstrap. Blackstrap molasses has a robust taste and many nutrients, leading to stories of its health benefits. A few of these were playfully exaggerated in the 1951 song, “Black Strap Molasses,” by Groucho Marx, Jimmy Durante, Jane Wyman, and Danny Kaye.

If King Syrup and molasses are different products, how did both come to be called molasses? The answer likely stems from an understanding of the sugar refining process. Technically, any syrup collected during the A, B, and C sugar boils is a molasses (or a treacle if in Britain). It could be that King Syrup was once characterized as a light molasses compared to the darker, blackstrap molasses. Curiously, King previously sold another syrup, Po-T-Rik, which was a blend of corn syrup and dark molasses. The word molasses appeared on its label and, perhaps, led to some people referring to all of King’s syrup product as molasses.

My exchange with Clint about molasses got me thinking of another misunderstood food, mangoes. In October, I was scanning through some old family recipes provided by cousin Barb (Bogart) Robbins. In the mix was one for “catsup” written down by her aunt, Leona (Bogart) Rathburn of Milton, Pennsylvania. Most of the ingredients seemed normal enough: tomato juice, onions, sugar, vinegar, and salt to name a few. However, one unusual ingredient really stuck out—a mango. Was this recipe for some sort of tropical ketchup treat? My interest was piqued. 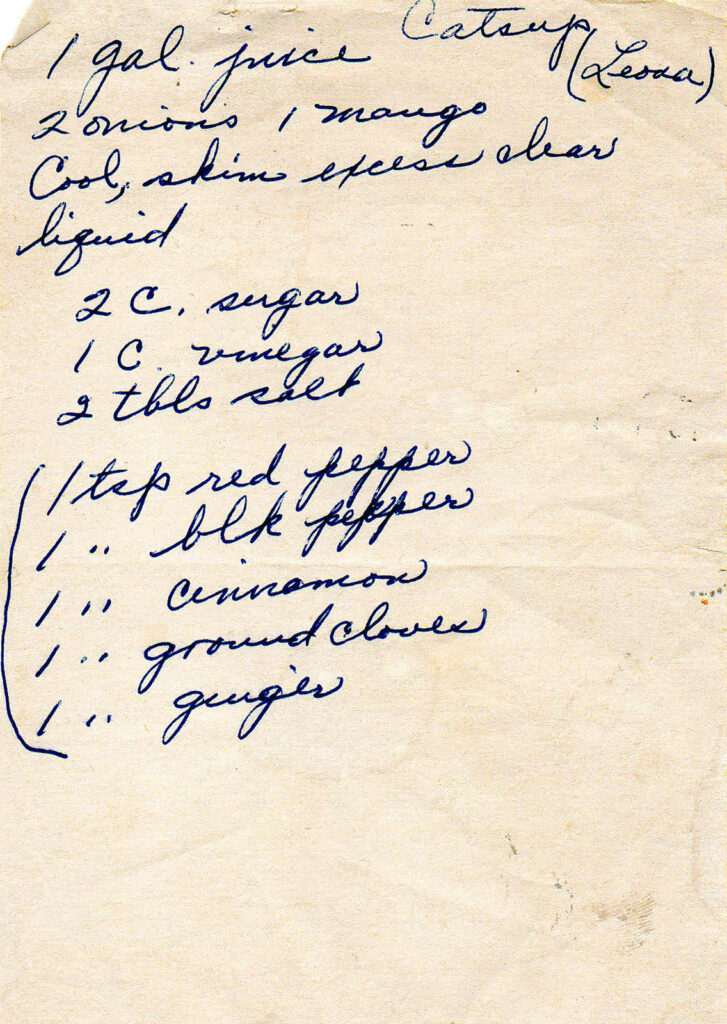 A few days later, on a call with with parents, I happened to mention the odd recipe and its exotic ingredient. They paused and then laughed. My parents explained that the recipe didn’t call for a mango fruit. Rather, it was referring to a green bell pepper! While this made sense for the recipe, I wondered aloud how mango came to mean a bell pepper. After a bit of research, I found an answer.

According to Richard Creed in the Winston-Salem Journal:

Mangoes (the real thing) that were imported into the American colonies were from the East Indies. Transport was slow. Refrigeration was not available, so the mangoes were pickled for shipment.

Because of that, people began referring to any pickled vegetable or fruit as a mango. A 1699 cookbook refers to “a mango of cucumbers” and “mango of walnuts.” And it came to pass that anything that could be pickled was a mango.

One of the most popular dishes was bell peppers stuffed with spiced cabbage and pickled. The dish became so popular that bell peppers, pickled or not, became known as mangoes. In the early 18th century, mango became a verb meaning to pickle.

Surprisingly, calling bell peppers mangoes is relatively common in the United States compared to referring to King Syrup as molasses. A quick online search shows dozens of websites discussing the confusion between the sweet, tropical fruit and the ubiquitous garden vegetable. Instances have been reported in towns from the Northeast to the Midwest and deep into the South.

Regionalisms in language, while sometimes confusing, can be amusing to consider and enjoyable to investigate. With the holidays approaching, it’s worth keeping these in mind too. Should someone offer you a mango with molasses, they might actually be fixing to give you a bell pepper and some King Syrup. Happy Thanksgiving!