Detail of a photograph from the funeral of Sue (Emmitt) Reichard Funeral, 1916

In the first part of this article series, we explored photos and information about the Hagenbuchs and Reichards. The second part continues with more information from Shaun Creighton and a few of the many photos he has of his family. I believe I am correct in stating that no other family is as well connected to the Hagenbuchs as the Reichards.

The previously published photo of the lady standing beside the Reichard gravestone is Clara (Hagenbuch) Reichard at the graveside of her husband Jim Reichard at Laurel Hill Cemetery in Orangeville, PA in 1910. Clara’s branch of the Hagenbuch family—her parents, William and Mary (Hutchison) Hagenbuch—and some of Clara’s siblings are buried at Laurel Hill Cemetery as well. Also, Elias Reichard (Jim Reichard’s uncle) is buried at Laurel Hill along with his first wife, Mariah Jane (Mausteller) Reichard, and their daughter, Lizzie (Reichard) Poust, and her husband and three daughters. The Poust daughters (Elias Reichard’s three granddaughters) all died old maids. Consequently, Elias Reichard has no living descendants. 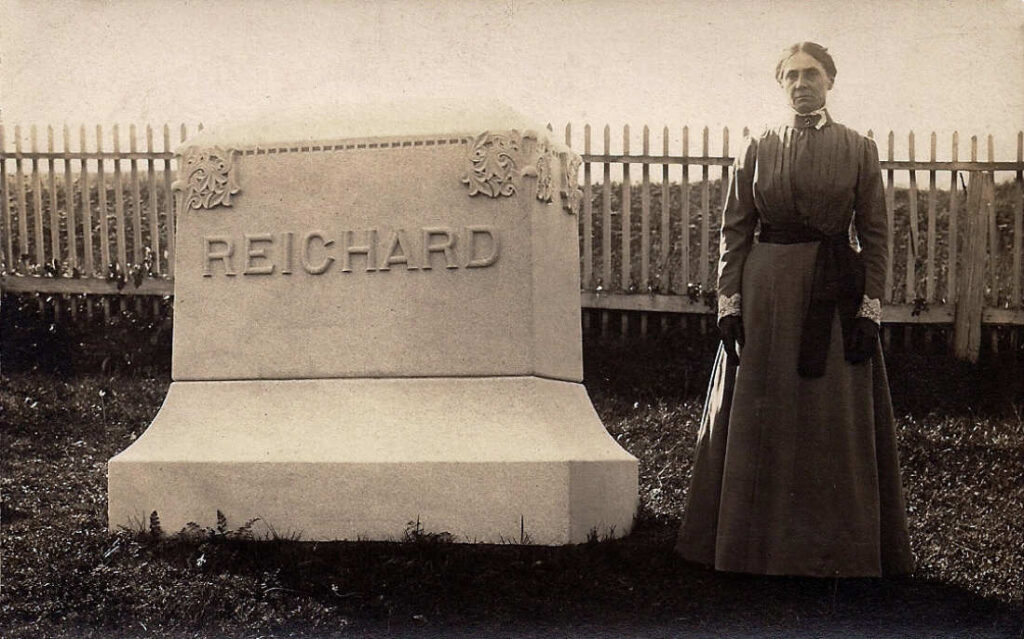 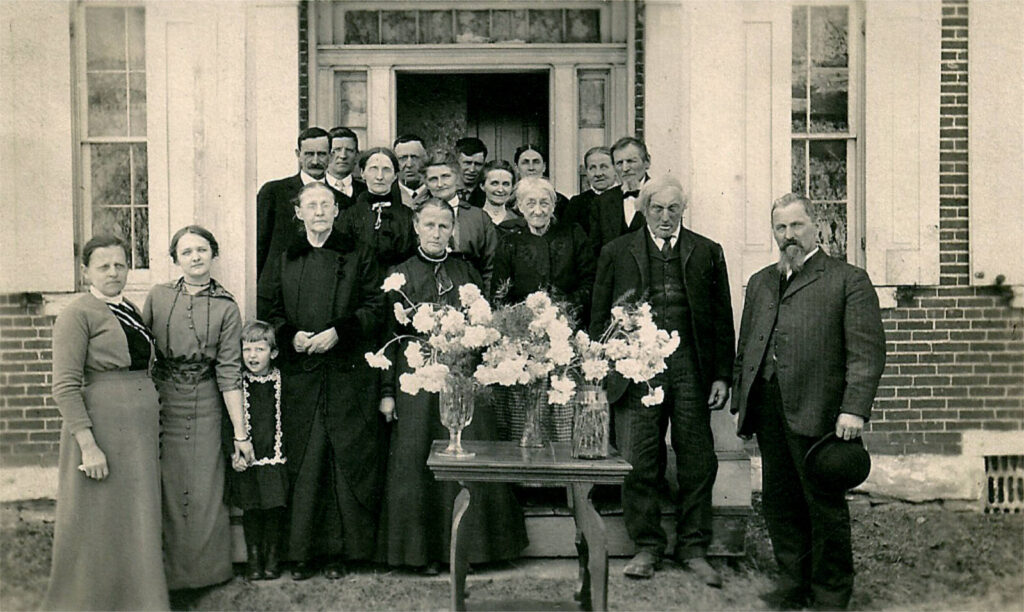 Above is a funeral picture from 1916 of Simon Reichard’s wife Sue (Emmitt) Reichard in front of Simon’s Frosty Valley home. The people shown are as follows:

Second Row (left to right): Lizze (Reichard) Poust (daughter of Elias Reichard and step-daughter of Tillie Hagenbuch Reichard), Jennie (Houck) Keller (daughter of Harriet Houck), Elmira Emmitt (sister of the deceased), Andrew Beagle (widower husband of Ellen Reichard). Behind Andrew is Emma (Hagenbuch) Reichard and to the left of her, in the doorway, is Clara (Hagenbuch) Reichard, daughter-in-law of the deceased. In the very back left (in front of the windows) is Robert Lawson, husband of Lula in the front row. To the right of Robert is Jasper Poust, husband of Lizzie (Reichard) Poust. 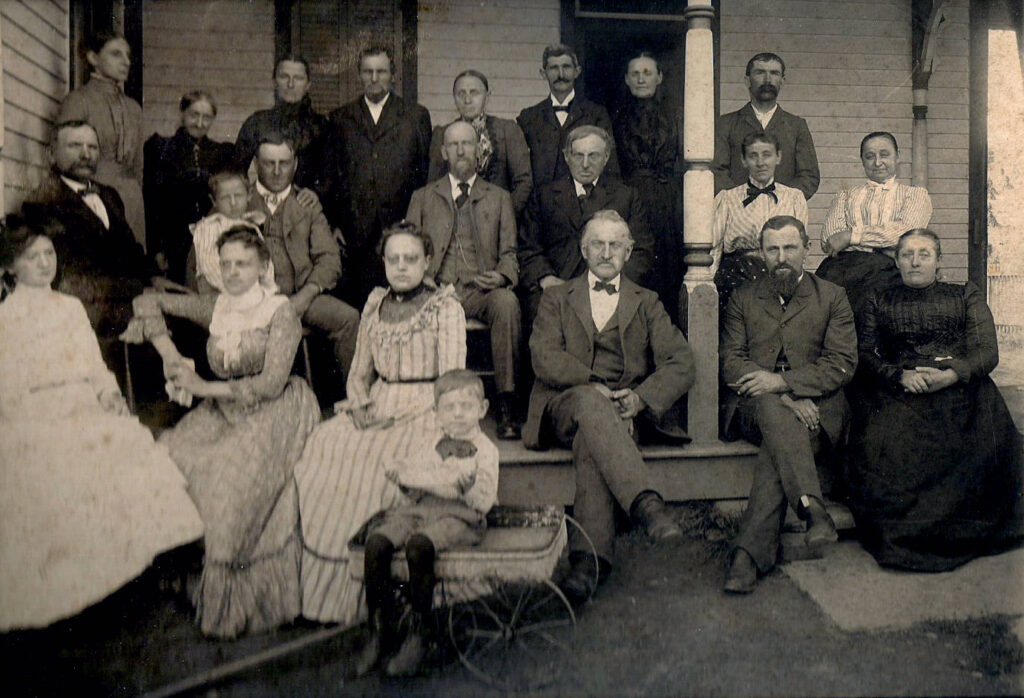 An additional photo here includes four Hagenbuch women at a Reichard Family get-together at the original Reichard Farm in Madison Township on Fairview Drive taken in the summer of 1901. Four years later, John and Emma (Hagenbuch) Reichard would sell the farm to their niece Martha “Mattie” (Hagenbuch) White (b. 1878, d. 1972). She is pictured in the front row far left, and her husband, Charlie White, in the back row far right. He was the Reichard Farm Overseer for many years. Mattie (Hagenbuch) White was the daughter of Joseph Hagenbuch (b. 1852, d. 1935) and his first wife, Sarah Elizabeth Robbins. 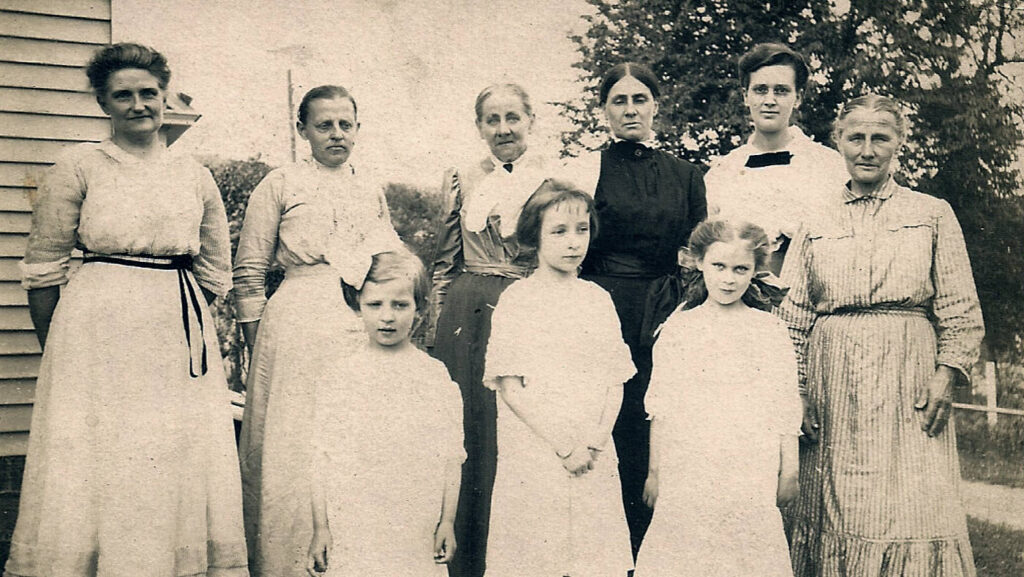 Women of the Reichard family, 1917

Clara (Hagenbuch) Reichard continued to attend Reichard family gatherings long after her husband, Jim Reichard, had died. Clara is in this group picture taken in the summer of 1917. Clara is in the back row, second from the right. To the right of Clara is Lizzie (Reichard) Poust, daughter of Elias Reichard, and on the left of Clara in the back row middle is Emma (Hagenbuch) Reichard. The girl in the front row on the far left is my great-aunt, Lois Lawson. It is thanks to Aunt Lois that all of these pictures have been preserved.

A couple more comments about Clara (Hagenbuch) Reichard. Clara often looks quite stern in photographs. However, she was a very nice person. Both my maternal grandfather, Andrew Lawson, and his sister, Aunt Lois Lawson, knew Clara well. Growing up, they played at her farm (Turkey Hill) in the barn and around the property. Clara was an astute business woman continuing to manage the large property and farm operation for 30 years after her husband Jim’s death. On her own side of the Hagenbuch family, Clara was closest to her younger brother, Boyd Hagenbuch (b. 1867, d. 1949). They are buried close to each other at Laurel Hill. Clara’s 1940 death certificate says she died of bronchial pneumonia. She was 78.

There was once a time when families were interconnected in an area not only through marriages, but also through business, church, and social gatherings. Research into one connection can lead to the discovery of another as Shaun Creighton and I found out with the Reichards. After Shaun sent me the information that the two articles on the Hagenbuch-Reichard connections were based upon, I used census records to investigate another Reichard family from the Milton area. It seems that I knew those Reichards when I was a boy, never realizing they were related to “our” Reichards. So it goes, on and on, as we build out our family tree with new folks and acquaintances!