We have numerous questions about Andreas Hagenbuch, including some about the Revolutionary War service of Andreas’ four sons: Henry (b. 1737), Michael (b. 1746), Christian (b. 1747), and John (b. 1763). These were explored in three articles published in the spring of 2017. Along with ferreting out the DAR mention of Andreas’ patriotic service and the “where” and “how” of the four sons’ fight for American independence is the “why.”

Why did these Pennsylvania Germans from the back country of Berks County, along with so many of their neighbors, join up? Why did they take up the cause? As I celebrated the July 4th holiday last week, this question came back to haunt me. So as usual, I did some research.

Most folks do not know that the Continental Congress in Philadelphia actually declared our independence from Great Britain on July 2, 1776. John Adams wrote that he believed this date would be celebrated as a national holiday. However, it took two more days for the draft of the written Declaration of Independence to be completed by the committee of John Adams, Roger Sherman, Robert Livingston, Benjamin Franklin, and principal author, Thomas Jefferson.

As a result, Congress actually approved the document on July 4th. At that time, John Hancock, Chair of the Congress, and Charles Thomson, Secretary for the Congress, were the only ones who signed the document before it was sent to the printer. It wasn’t until weeks later that other delegates began to affix their signatures to the document for a total 56 signatories.

What does this have to do with Andreas and his family living in Berks County? I found that a German translation of our Declaration of Independence was printed on July 8th, only three days after the English language version went to press. No one is sure how many copies of the German language publication were printed (as compared to 200 of the English version), but only two copies of this German version exist. 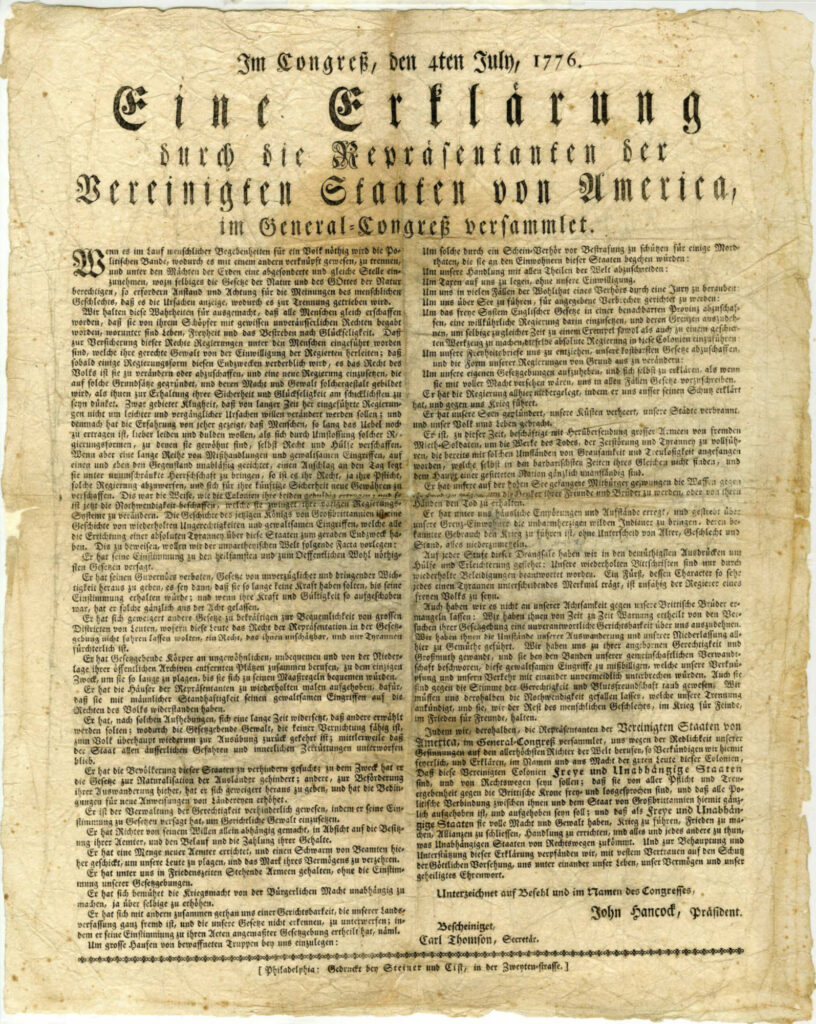 One is in a private collection in Europe and the other is owned by Gettysburg College. We know that the English version was read to a crowd outside Independence Hall (then called the Pennsylvania State House) on July 8, 1776. Copies in the form of broadsides were then sent throughout the colonies. Even if only a few of the German version were distributed, in my opinion, they would have landed in nearby towns with German-speaking populations such as Allentown, Lancaster, and Reading.

Allentown was the location of the Cross Keys Tavern, owned and operated by Henry Hagenbuch, Andreas’ eldest son. Already involved in militia affairs, Henry was commissioned Captain of a company of 100 men which was part of a “Flying Camp” on July 9, 1776, only one day after that German version of the Declaration of Independence was printed in Philadelphia. It seems the issue of “life, liberty and the pursuit of happiness” was moving fast! We will never know if our most famous document of freedom had anything to do with Henry’s commission or the future service of his brothers: Michael in 1777, Christian in 1778, or John in 1782 (possibly as early as 1779).

Nevertheless, it’s important to note that the Pennsylvania German community thought it important enough to print and distribute the Declaration in their own language. In German, the words of the Declaration which we are most familiar with read as follows:

A direct translation of the above into English is:

We hold these truths to be universally accepted that all people have been created equal, that they have been endowed by their Creator with certain inalienable rights, among which are life, liberty, and the pursuit of happiness.

These German words, possibly ringing in Henry Hagenbuch’s ears and in many others at the Cross Keys Tavern on July 9, 1776 may have been the impetus for Captain Hagenbuch’s company to form up and march off to fight in the August 27, 1776 Battle of Long Island. 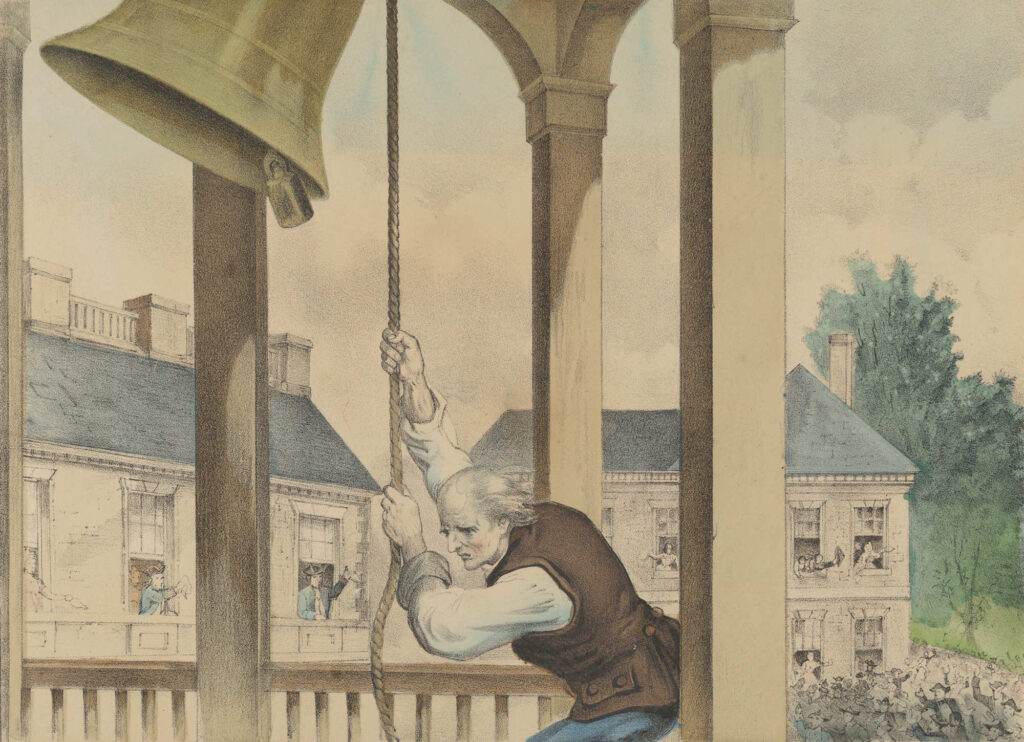 An 1876 print by Currier & Ives titled: The Tocsin of Liberty–Rung by the State House Bell, (Independence Hall) Philadelphia, July 4th, 1776, “Proclaim liberty throughout all the land, unto all the inhabitants thereof” LEV.XXV.10. Credit: The Met Museum

There was another occurrence in the hot July of 1776 which may have influenced Hagenbuchs to fight for freedom. It is a symbol of our early American determination to “proclaim liberty throughout all the land”—the Liberty Bell. The bell, then housed in the steeple of the Pennsylvania State House (Independence Hall) is said to have rang out on July 8, 1776 to announce an important event for the citizens of Philadelphia, the reading of the Declaration of Independence. But, by the next year the bell was in danger of being destroyed by the British, who marched into Philadelphia after General Washington’s defeat at Brandywine in September of 1777. The bell was removed. It was first taken to Bethlehem and then to Allentown.

One of the members of the Pennsylvania Assembly, also meeting in Philadelphia where the Continental Congress did, was Simon Dreisbach, Jr. Simon’s daughter, Magdalene, would eventually marry Andreas’ youngest son, John. And Simon’s brother Adam’s daughter, Susanna, was already married to Andreas’ third son, Christian. The Dreisbach family has often claimed that Simon was instrumental in having the Liberty Bell hidden in Allentown. If this fact is true, surely John and Christian were both affected by the Dreisbach connection and inspired to protect one of our early symbols of freedom. Also their brother, Michael, was certainly influenced by Henry’s decision to heed the early call to military service.

All of this questioning is supposition on my part. But I want to believe that our ancestors were patriotic, not just because of peer pressure, but also because they had strong beliefs in the rights of mankind and in the words embodied in one of our most significant documents. They must have read or heard key phrases such as “Governments are instituted among Men, deriving their just powers from the consent of the governed” and “with a firm reliance on the protection of divine Providence, we mutually pledge to each other our Lives, our Fortunes, and our sacred Honor.”

Writing this, I wonder: When was the last time you read through the Declaration of Independence? Did you know it is really a letter to the world explaining the reasons why the American colonies were dissolving their relationship with the government of Great Britain? It should be our duty to read through the Declaration of Independence at least once a year and think about the words, just as our Hagenbuch ancestors did. Then, afterwards, you might ring your own liberty bell loud and clear!