Detail of a photo of Solomon Dentler Hagenbuch, c. 1864

In part two, the final part in this series, we continue to follow the stories of Solomon, Samuel, and Henry W. Hagenbuch. Click here to view part one.

Solomon and his cousin Henry W. must have been present at the battle of Antietam Creek (Sharpsburg, Maryland) on September 17, 1862. Here the 53rd engaged Confederate troops in the bloodiest one-day battle in American history with almost 23,000 casualties. The 53rd was ordered into some of the hardest fighting along the sunken road and then led the charge into the cornfield, until they were ordered back to support an artillery battery.

In late June of 1863, the 53rd was moving north through Taneytown, Maryland on course for the battle of Gettysburg. Solomon is listed as a Sergeant on the 53rd Regiment bronze plaque located on the Pennsylvania Monument. However, his name is misspelled as “Haughenback.” As mentioned in part one, Henry W.’s name is not listed on the monument. Had his enlistment run out before the battle at Gettysburg and he did not reenlist? 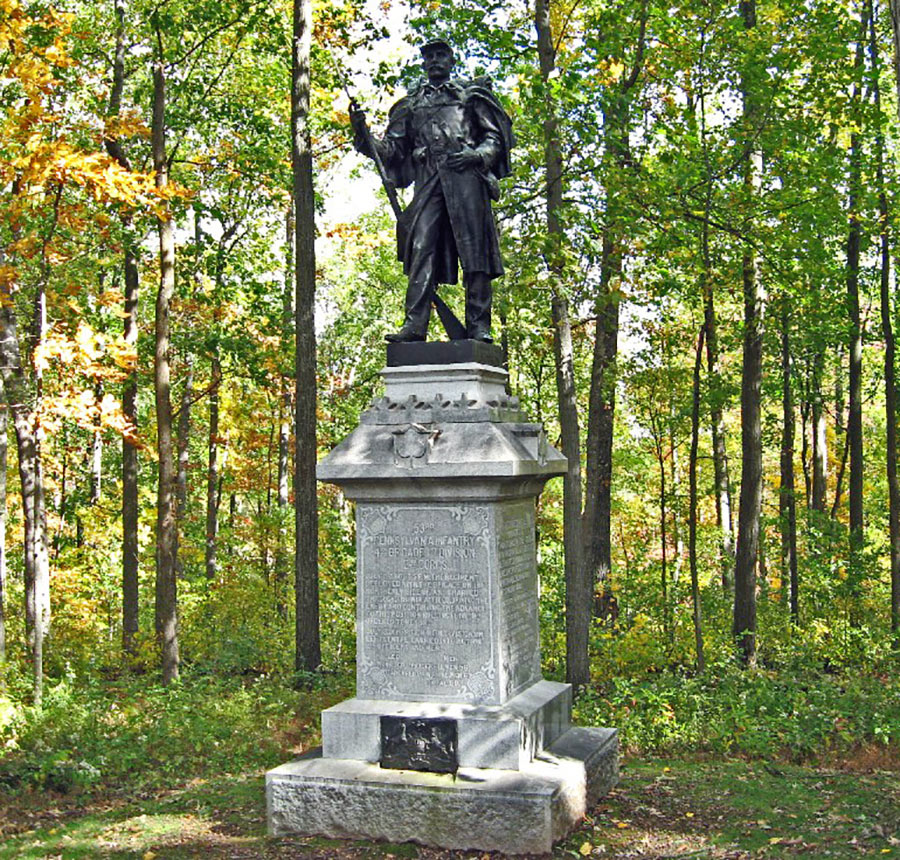 On July 2nd soon after midnight, the 53rd arrived at Gettysburg and by 8 AM was situated on Cemetery Ridge. At 5 PM they were ordered to move south to the Wheatfield, where they met the Confederates head on. Even with destructive musket fire from the enemy, the 53rd managed to push them back and hold back two additional waves of counterattacks. The Confederates then moved on the 53rd from the rear, and the commander was compelled to retire. On July 3rd the regiment came under heavy artillery fire but was not actively engaged. During the two-day engagement and having only 124 officers and men, the 53rd had six men killed, 67 wounded, one missing, and six captured. 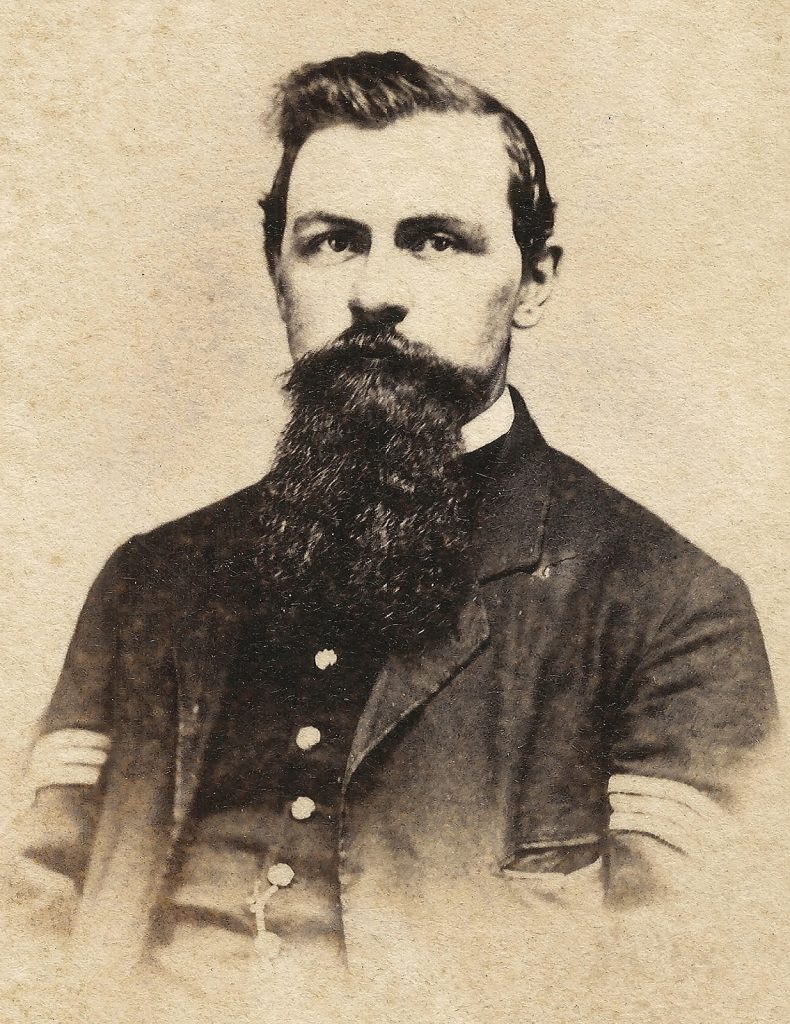 The 1864 campaign to take Petersburg, Virginia is described in The History of the Pennsylvania Volunteers, 1861–65 written by Samuel Bates in 1871. The events of June 16, 1864, the day Sgt. Solomon Dentler Hagenbuch died, are mentioned in the account.

The regiment remained in the vicinity of Spottsylvania, throwing up earthworks at different points, and almost constantly under fire, until the 25th of May, when it crossed the Pamunkey, thence to Tolopotomy Creek, and on the 2nd of June arrived at Cold Harbor. It was pushed close up to the enemy’s entrenched line, and immediately threw up breast-works. At five o’clock on the morning of the 3rd, a furious but futile effort was made to drive the enemy from his position. Two other gallant charges were made, wherein men never marched to death with stouter hearts; but all in vain. In these charges the Fifty-third suffered severely. On the night of June 12th, the regiment marched and crossing the Chickahominy and James Rivers, arrived on the evening of the 16th in front of Petersburg. In the afternoon a charge was ordered upon the enemy’s strong works, which was gallantly executed, but was repulsed, the Fifty-third losing in this desperate struggle. 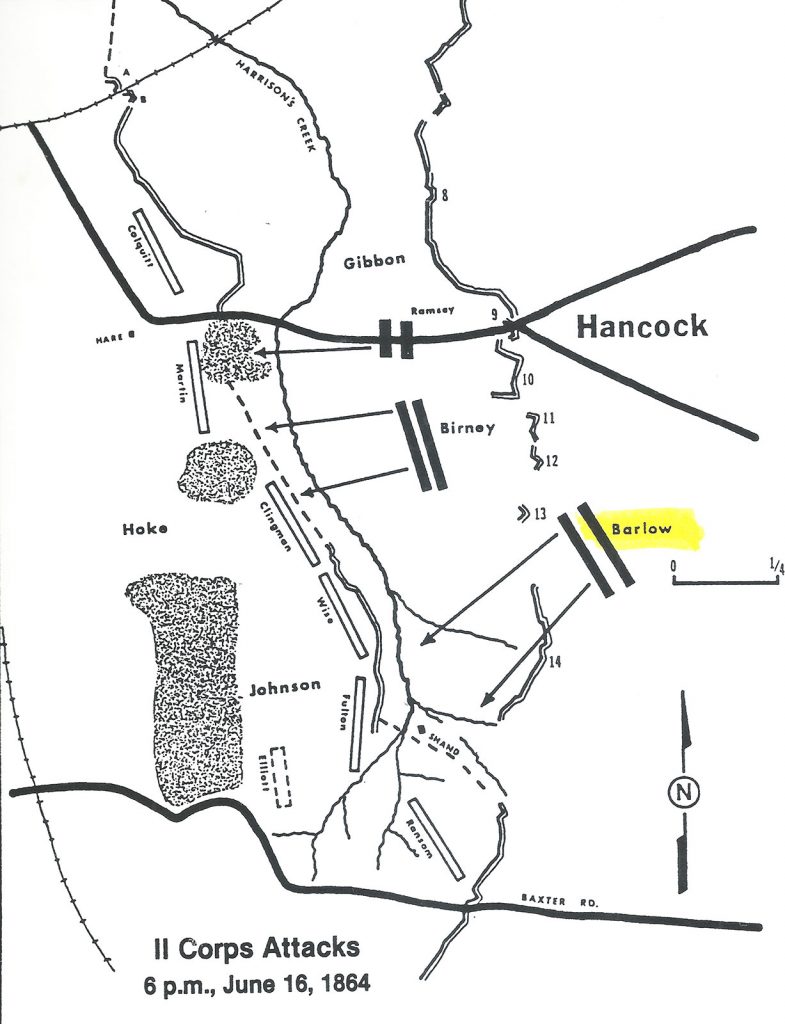 While Solomon and cousin Henry were engaged in the battles of Virginia, Maryland, and Pennsylvania, brother Samuel, as a “horse man” was engaged in many raids, battles, and constant movement in the deep south. From May to September of 1864 the 7th Pennsylvania Cavalry was involved in the Atlanta campaign in the areas of Big Shanty, Powder Springs, Rossville Ferry, and the siege of Atlanta from July 22nd to August 25th. After that Samuel rode with his regiment to north Georgia and the Chattahoochee River, then into Alabama, and eventually by the end of the year to Louisville, Kentucky in order to refit. The 7th Cavalry was not at the Appomattox surrender in April of 1865. Instead, they were still ranging throughout Alabama, back into Georgia, and finally to Nashville, Tennessee where they were mustered out in August of 1865.

Samuel married Anna Black, one source giving their marriage date as 1869 and the other as 1872. Samuel and Anna are buried at Riverview Cemetery in Huntingdon, PA. In the 1880 census, the couple is listed with two children: Stella (7 years old) and Wilmer (4 years old). At that time, they were living at Mt. Vernon, Virginia and Samuel’s occupation is listed as a gardener. This could mean that Samuel was employed as a gardener on the Mt. Vernon Plantation. However, for census purposes, Mt. Vernon is defined as a community located between Alexandria and Fort Belvoir, Virginia, meaning he may have been working anywhere in that area.

In the 1900 census, Samuel and Anna are noted as living in Pittsburgh, along with Stella and Wilmer. Samuel’s occupation is a watchman. Wilmer was born in 1876 and died in 1966. He married Alice Sommers, and they are buried at Trinity Union Church Cemetery in Springfield Township, Bucks County, PA. Stella was born in 1872 and died in 1961. She was married to William Messenger. In the 1930 census, William and Stella (Hagenbuch) Messenger are living in Independence, Kansas. Stella is buried at Mount Hope Cemetery in Independence. William is not buried with her. 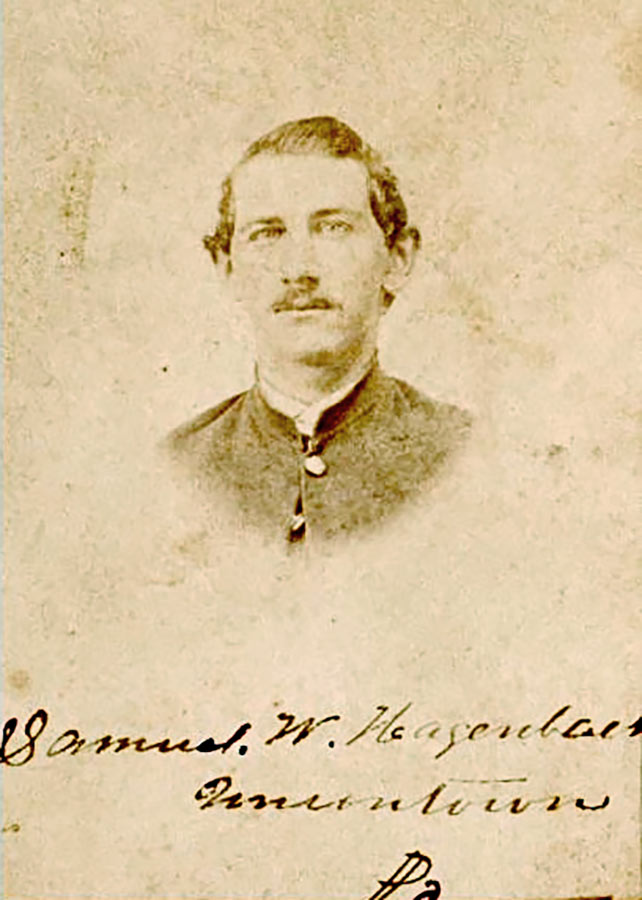 Civil War regiments not only included neighbors and friends, they also included relatives. Cousins Solomon and Henry W. served in the same regiment. Although we can follow the paper trail of Solomon’s enlistment and service during the Civil War, the data surrounding Henry W.’s service is a bit sketchy. More research is needed in this area.

Solomon’s brother, Samuel, joined a Pennsylvania cavalry unit in 1864 when he was 19 years old. His Civil War service can be traced by following his cavalry unit as it wound its way throughout the south during the final years of the Confederacy. And, we can trace his descendants into the 20th century.

We know of other Hagenbuchs who joined the ranks of the Union Army too, including one whose letters to his wife are in the collections of Auburn University. A future article series is planned around this story.

Finally, some might wonder if any Hagenbuchs served in the Confederate Army, meaning that a conflict which divided a country also divided our family. Here we will leave you with a cliffhanger and suggest that it is certainly possible.

Special thanks to Marc Benedict for his help in researching this article series.