A Short Story About A Long Quilt

Detail of a photo showing the quilt

A few months ago I received some photos and a message from my first cousin, Nancy (Hagenbuch) Worden. The two photos are of a quilt constructed of flag patches from many different countries, the United States, and world areas. Some patches also seemed to be designs instead of flags. The U.S. flag patches are all 48 star flags, which was used between 1912 and 1959. A few other countries’ flags looked different especially Spain. That flag patch was one that was used only up until 1927. This would date the flag patches between about 1912 and 1927 or so. It is a large quilt: 5 feet 5 inches by 7 feet.

Nancy wrote that her father Wilmer Hagenbuch (b. 1918) had probably received it in 1967 after his father Clarence (b. 1889), my grandfather, died. Eventually it was passed on to Nancy. The only information she knew was that a woman, whose name she did not know, had made it for our grandmother, Hannah (Sechler) Hagenbuch, and that the woman was present each time Hannah gave birth. 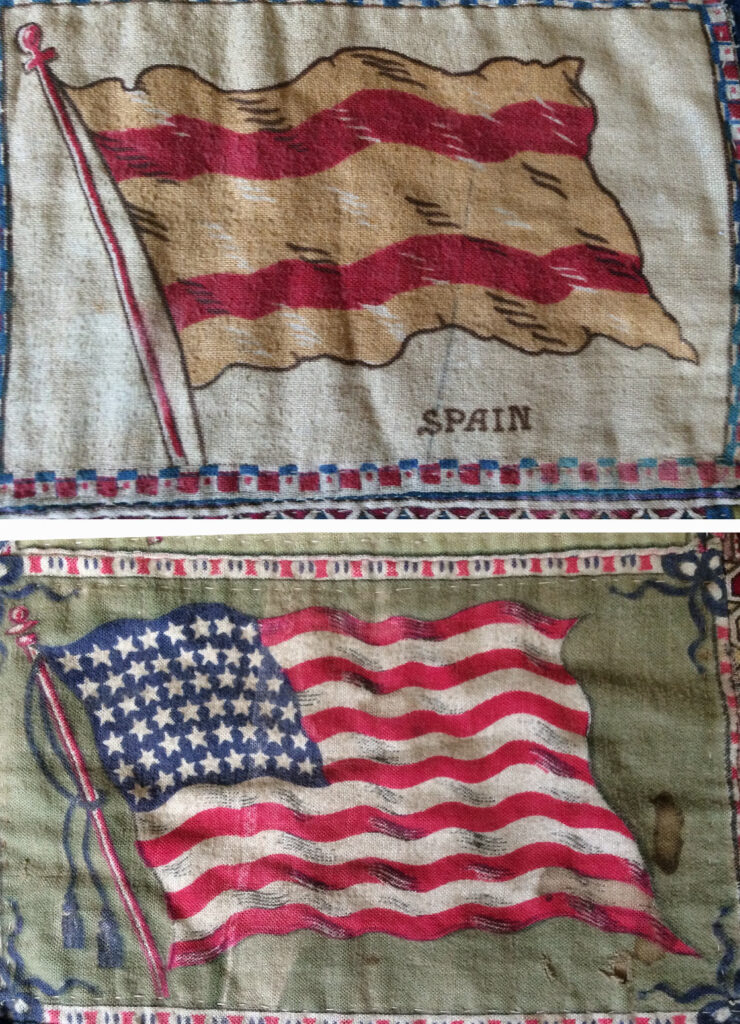 Quilt silks depicting the flags of Spain and the United States

This bit of information lit the light bulb of my memory. My father, Homer (b. 1916), brother to Wilmer and son of Clarence and Hannah Hagenbuch, had told me several times about an unmarried lady who was a midwife for many women in Montour County during the early 1900s. Dad never specifically said that this lady was present at all the births of himself and his six siblings, but I had the idea she was at some of them. Her name was Mariah Madden. 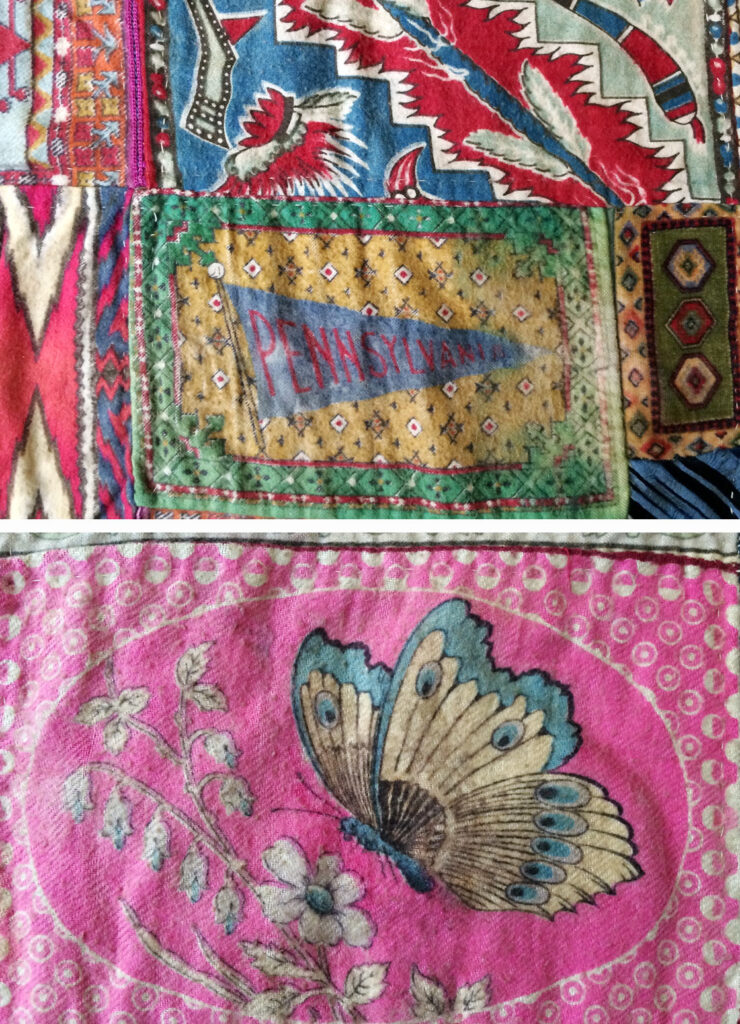 Silks from the quilt having themes other than country flags

From Nancy’s photos of the quilt I recognized the flag patches as “cigar silks” which were inserted in tobacco tins and packages during the late 1800s and early 1900s. We could liken them to the prize in the Cracker Jack box or the cartoon wrapper in Bazooka bubble gum. Called “silks” they came in all sorts of themes. Years ago, my wife Linda purchased a lot of these at a yard sale which were of American Indian chiefs. Some were sewn together, others were single as they would have been found in the tobacco package. Cigar silks are highly collectable and may be made of flannel, also. This quilt consists of flannel patches.

So, I did some more digging. I remembered that a few miles from our family church, Oak Grove Lutheran, there was a small cemetery on a back road with a white picket fence, gate, and overhead crosspiece with the inscription “Madden Cemetery.” I wasn’t sure how many graves were in that cemetery, but it was worth a try to see if Mariah was buried there. I went to Findagrave and found the Madden Cemetery in Montour County. Unfortunately, only five graves were listed and none of them were Mariah’s. 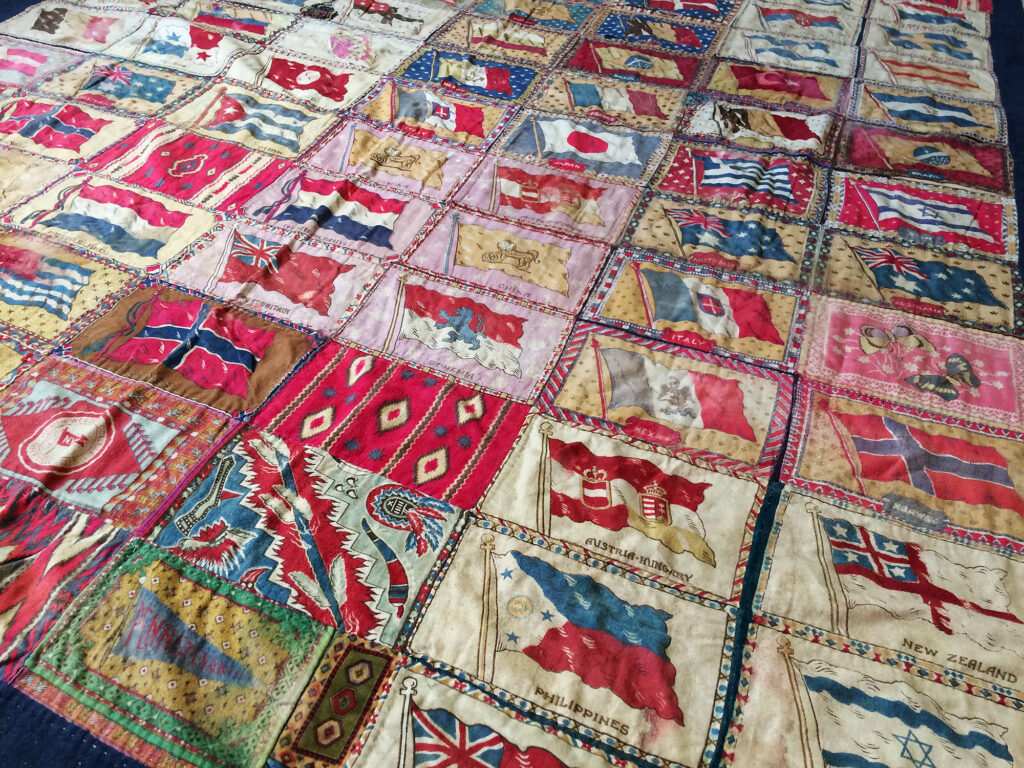 Portion of the flag quilt made from cigar silks

Next, I went to the census of 1920 and searched for Mariah Madden, as that is a median year when the children of Clarence and Hannah were born. Bingo! There she was: Mariah Madden, born about 1863, unmarried, living with the Ralph Seidel family in Derry Township, Montour County. Derry Township is where Washingtonville, Pennsylvania is located, which is close by where Clarence and Hannah lived when their children were born. As further evidence that this was the Mariah Madden who made the quilt and gave it to my grandmother, her occupation is listed as “nurse.”

I moved on to find out where Mariah was buried, if not in the Madden Cemetery. Findagrave delivered that information. I found our lady buried in the Derry Presbyterian Cemetery located near White Hall, Pennsylvania just north of Washingtonville. Spelled “Maria” her gravestone reveals that she was born on July 29, 1862 and died on March 20, 1949. 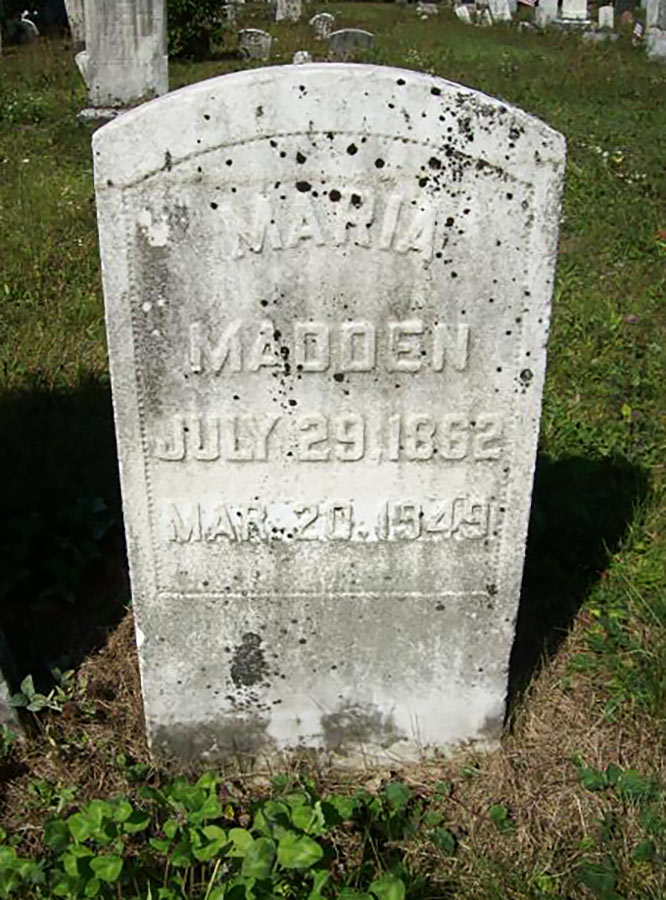 Knowing that this would make an interesting article, I came up with the quirky title and wrote most of what is above. But before I finished this short piece, I contacted my first cousin Kathleen (Robb) Shuler, whose mother was my Aunt Florence (b. 1925). Florence was a sister to my father Homer and my Uncle Wilmer. Another bingo! Not only had her mother talked about Mariah Madden, but Kathleen knew where she was buried and she had a photo of her from her mother’s effects, as well as a few letters. Suddenly the one article became two. To be continued…