Detail of a photograph of Mark Hagenbuch wearing a plague mask

Although we know more than ever about Andreas Hagenbuch (b. 1715) and his family in Berks County, his early life in Germany, before he came to America in 1737, is shrouded in mystery. Information about Andreas, his parents, and grandparents comes from a variety of sources. One of these is a book by Annette K. Burgert, Grossgartach, Wuerttemberg, to Pennsylvania: Some Early Colonial German Immigrants, which provides details about the ancestry of the patriarch, Andreas.

During this time of pandemic, I have been thinking about one particular incident. Andreas’s grandparents, Hans Jacob Hagenbuch Jr. (b. 1649) and Anna Barbara (Oeler) Hagenbuch (b. 1657), died on the same day, December 28, 1693, in Cleebronn, Germany. They left behind at least one child—Andreas’s father, Hans Michael Hagenbuch, who was about eight years old. Without knowing a lot about the history of Germany in the late 1600s, I had convinced myself that these 7th great grandparents of mine had probably died of the black plague. According to a 2013 article by researcher Guido Alfani, about 25% of southern Germany’s population was lost to the black plague in the 1600s; although the worst of the plague was over by the latter half of that century. So, several weeks ago I was ready to write about the possibility of Andreas’s grandparents dying of the plague. Of course, this idea was spurred on by our own recent trials with Covid.

While still a possibility, there is a more plausible explanation for the same day deaths of Hans Jacob, Jr. and Anna Barbara, leading to a probable reason why Andreas left Germany in 1737. Genealogists know that no stone should be left unturned and to be careful about categorically stating “this is the way it was!” For assistance, I turned to our cousin in Mühlacker, Germany—Ulrich Hagenbuch. 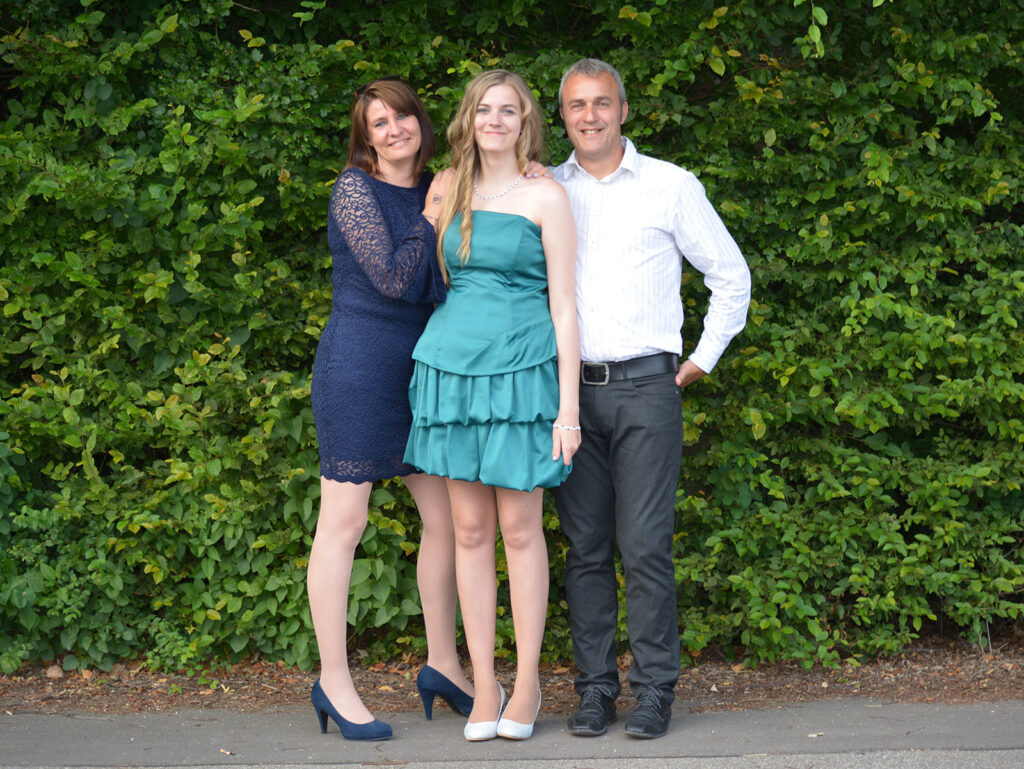 Our cousins from Mühlacker, Germany: Ulrich Hagenbuch with his wife, Kerstin, and daughter, Franziska

Ulrich and I have been friends on Facebook for a few years. It is my modus operandi to “friend” folks on Facebook with the last name of Hagenbuch and then figure out how we are related. So it was with Ulrich, especially since he lives in the area of Germany where our Hagenbuch ancestors lived. Early into our friendship, he let me know that his mother had worked on the Hagenbuch genealogy, and the word in his family had always been that a brother or uncle of one of his ancestors had come to America. We assume that was Andreas. Furthermore, Ulrich relates his German Hagenbuch family to ours, which traces the family back to Switzerland to our mutual 9th great grandfather, Ulrich Hagenbuch (b. 1581). History often repeats itself in family names like Ulrich and Andrew (Andreas)!

With my solid belief that our Hagenbuch 7th great grandparents died on the same day in 1693 due to the plague, I asked Ulrich about this. Consequently, he turned to a local historian, Martin Ehlers, who is from the Maulbronn City Archives. Maulbronn is about 15 miles from Cleebronn. Continuing with German geography, the 7th great grandparents who are the basis of this article, Hans Jacob, Jr. and Anna Barbara Hagenbuch, were living in Cleebronn when they died in 1693. Hans Michael was baptized in Schwaigern which is near to Cleebronn.

A few miles to the north is another place that is also important to our family history. This is the village of Grossgartach, which today is part of Leingarten. Andreas’s parents, Hans Michael and Anna Christina (Fritz) Hagenbuch were married in Grossgartach in 1712, and Andreas was born and baptized there in 1715. A future article will attempt to make more sense of this area in southern Germany where our Hagenbuch family lived in the 17th and 18th centuries. Cousin Ulrich states that today the area is still populated by Hagenbuchs. 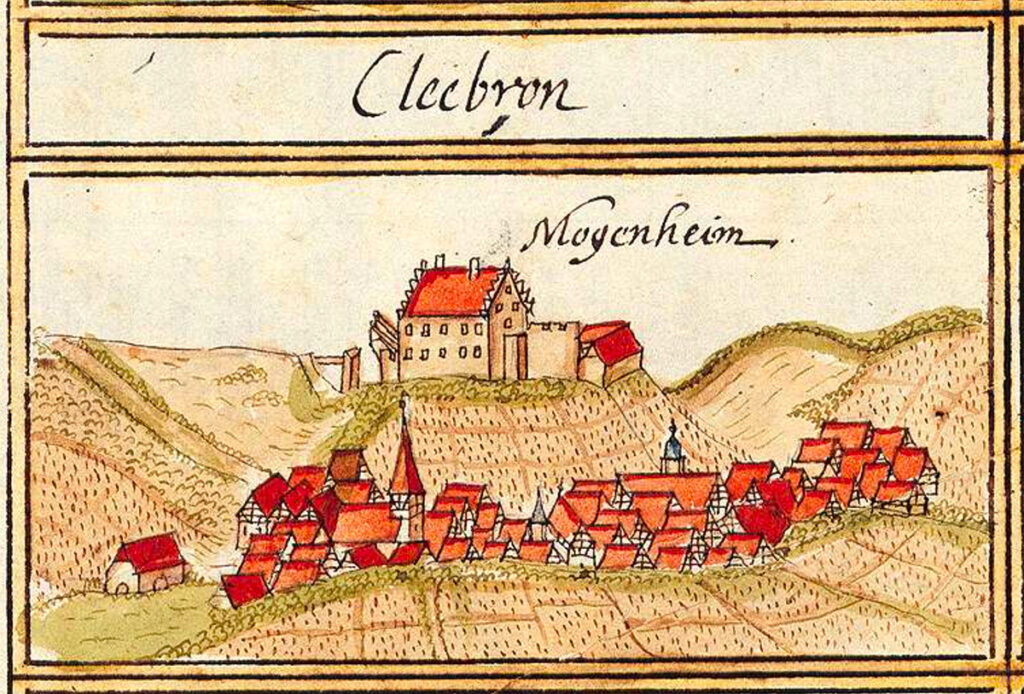 Cleebronn, Germany in 1684 by by Andreas Kieser. Credit: Landesarchiv Baden-Württemberg

This region in Germany was ravaged by war during the Palatinate War of Succession, 1688–1697. The deaths of Andreas’s grandparents occurred right in the middle of this horrible conflict, both date wise and geographically. Historian Martin Ehlers wrote the following in response to Ulrich’s question about the same day deaths:

At that time (1688-1697) French troops invaded our area which was defenseless because the Swabian district regiments in Hungary were used against the Turks. From the conflict with France, the “Eppingen lines”, which also ran through Mühlacker, still [visible] today (Defense line). The local population had to suffer enormously from the war, i.e. destruction, shortage and hunger, high taxes . . .

For more information, readers should look up the background of the Palatinate War of Succession as it is a conflict which devastated not only southern Germany but many parts of Europe. In his email to me, Ulrich described this another way:

The people died here partly like “the flies”, unbelievable if you read their records. It is so completely explainable that our ancestors both died on the same day, exhausted and starved, and maybe even killed by the enemy.

So, rather than the black plague, the more plausible explanation of Andreas’s grandparents’ same day deaths was due to the terrible, ongoing war that wiped out about one quarter of the German population—a population that was already struggling to eke out a living. Both Martin Ehlers and Ulrich Hagenbuch went on to relate that this ravaging war in Germany would have had long term consequences. 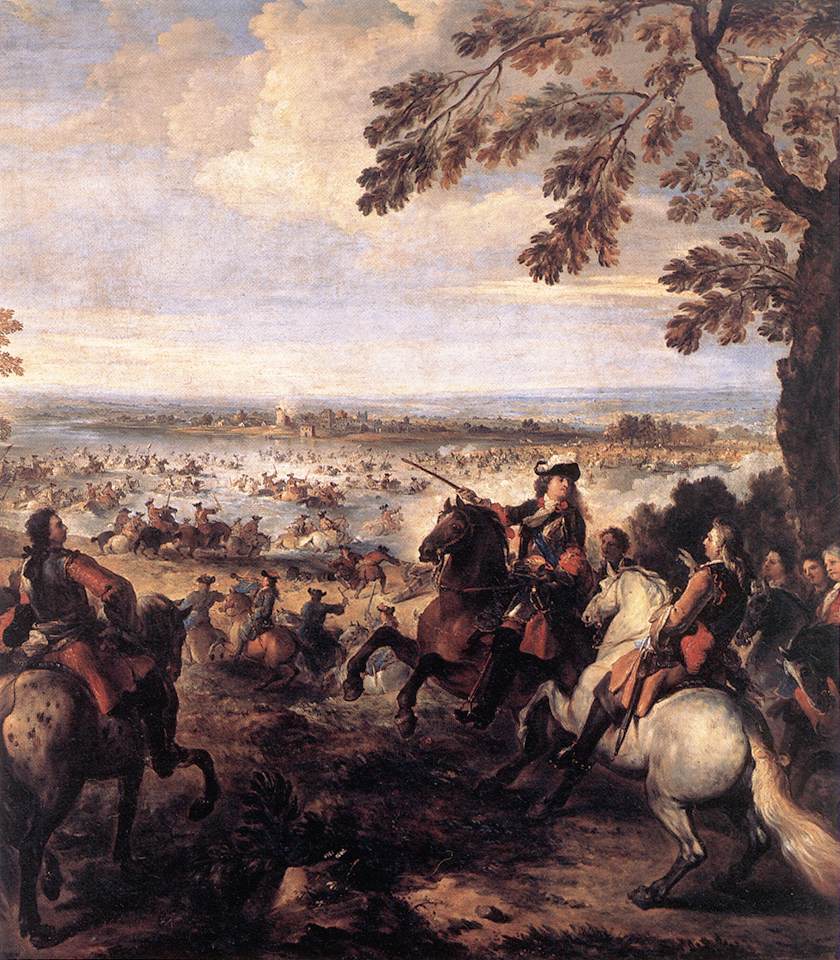 King Louis XIV of France crossing the Rhine River in 1688. Painting by Joseph Parrocel in 1699.

Southern Germany would not recover from the effects of the War of Succession for many years, resulting in another detail that affected the Hagenbuch family of Cleebronn and Grossgartach. That effect would be the immigration of Andreas, his second wife, and young son Henry, to America. As Andrew wrote in his last article:

Years of war had left many families living in hardship. Resources were constrained, with too many people vying for too little land. This resulted in bureaucratic regulations that limited economic and job opportunities.

Therefore, since we believe that Andreas’s grandparents’ same day deaths in 1693 and his migration to America in 1737 were not a result of the black plague, we can ascertain these two events in our family’s history were due to bloody struggles and consequential human desperation. In a way, this article would be better entitled “Wars, Despair, and Hope.” Though rooted in hardship, we know that Andreas’s hopes and dreams were fulfilled by his success in Berks County, Pennsylvania and the establishment of our large family now living in the United States. 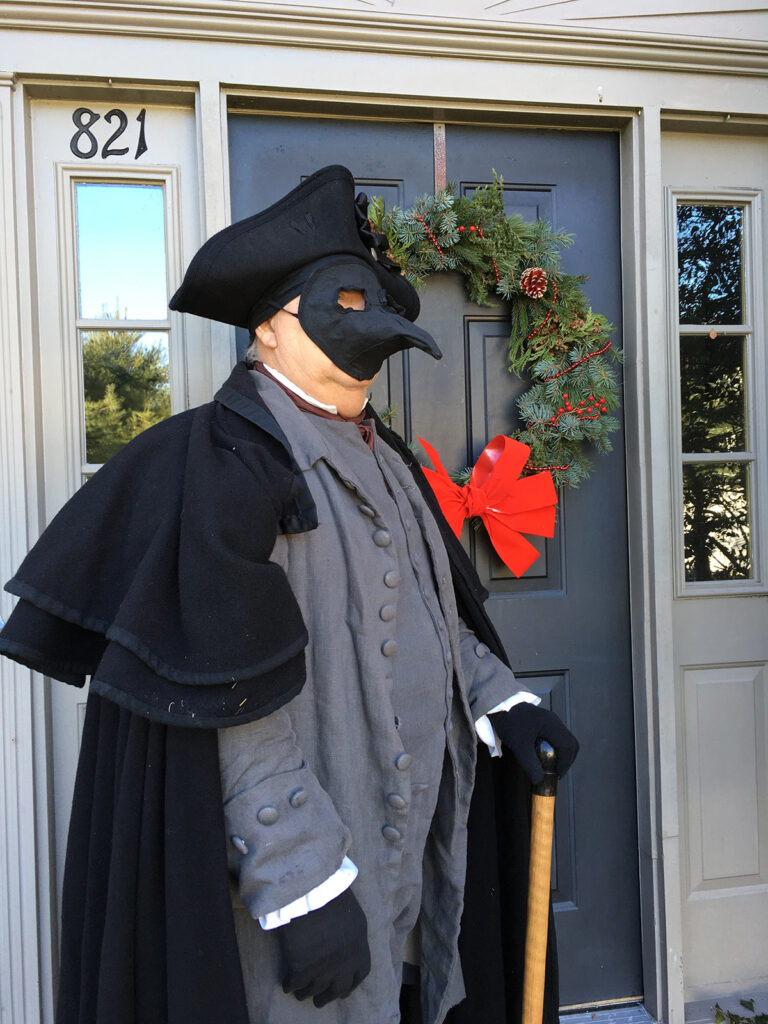