The House That Hiram Hagenbuch Built

Detail of a photo of Mark and Leon Hagenbuch in front of Hiram's house in Milton, March 2019.

Ever since first seeing the house on the hill in June of 2015, I have been obsessed. Obsessed in wondering what it was like for my great grandparents and their passel of children to live in that house. Obsessed in wondering what it was like on those days in the summer of 1897 when death held its grip on the house’s atmosphere. Obsessed with the sadness when the family had to move from the house to begin their new life at the family farm in Montour County.

After Andrew and I discovered Hiram and Mary Ann (Lindner) Hagenbuch’s house north of Milton, Pennsylvania, I found out from a cousin in the area that it was owned by Steve Everitt. Steve is the great grandson of Enoch Everitt who loaned the money to Hiram and Mary Ann to build the house. He lives in a modern home he built several years ago which is located beside my great grandfather’s house. After several attempts, I finally got in contact with Steve; but because of his work schedule it was difficult to arrange a time for me to tour Hiram’s house. 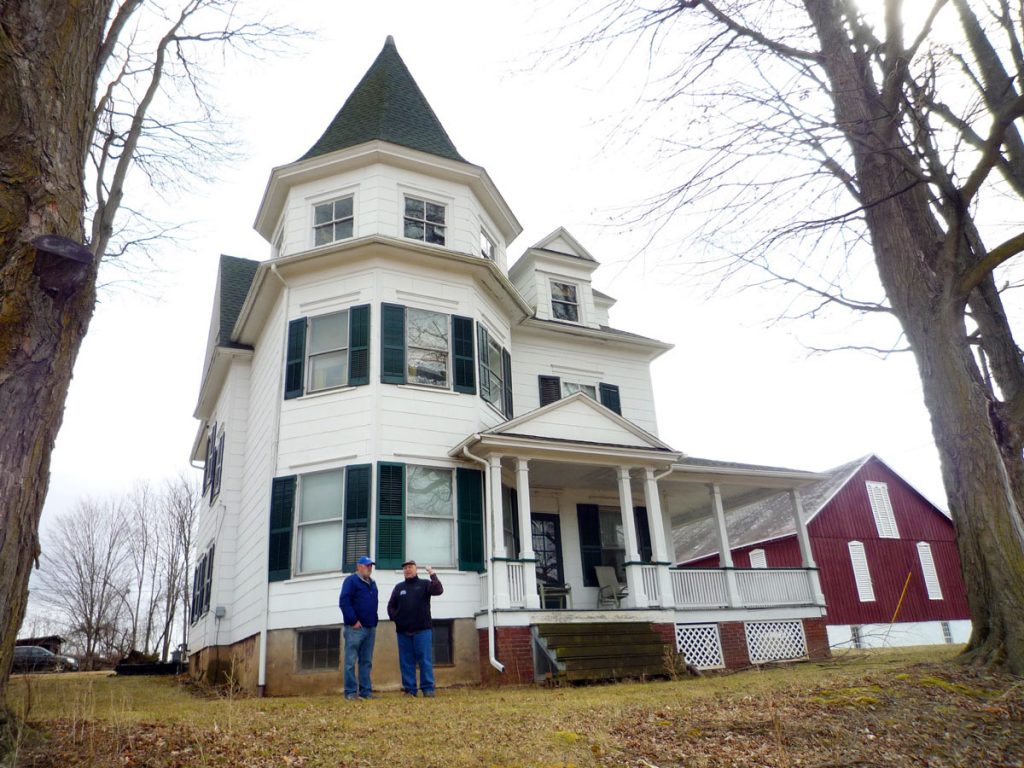 Two of the great grandsons of Hiram Hagenbuch stand in front of his home, March 2019.

In December of last year I arranged to spend a day with my first cousin, Leon Hagenbuch, who lives near Turbotville, which is north of Milton. We spent the day riding around, reminiscing, and visiting cemeteries. We even stopped to see a childhood acquaintance, John Marr, who has an amazing collection of local memorabilia. I had a great time back in my “old stomping grounds.” When I left Leon in the late afternoon, I realized I would be driving past the house on the hill. On a whim, I decided to stop in at Steve Everitt’s to check if he was home. He was!

Steve and I talked a bit about the house. He told me that his great grandfather had loaned the money to Hiram and Mary Ann to build it, but the farm land it was placed upon was owned by his family and still is. The house went to the Everitt family sometime after Hiram and his son, Henry Bruce, died in July of 1897. Steve’s family has owned the house ever since, and he lived in it as a boy. His grandfather was the last to live there and, since he died several years ago, it has been vacant. Of course, it was modernized some since it was built in 1896—but not by much! 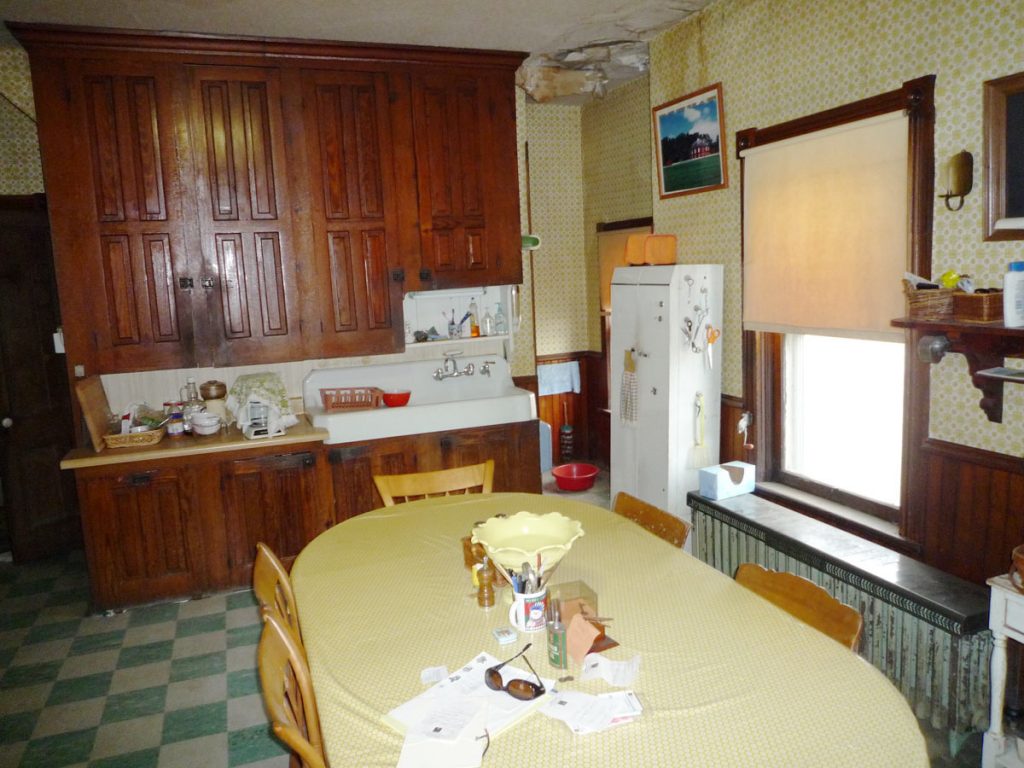 Kitchen in Hiram’s house. The back entrance to the house is behind this view. The dining room is to the left and the smaller, second stairway is to the right of the cupboards.

We went over to the house and entered the back door which leads into the kitchen. The shivers went up my spine. It is a large kitchen with many cupboards, just suited for a family of considerable size. I walked from room to room and could easily imagine my great grandparents, my great uncles and aunts, and my grandfather Clarence living there. The house seemed to go on and on. It’s quite large!

Along with the kitchen and the tower room on the first floor, there is a dining room and parlor. The first floor is trimmed in solid light oak. The original wall paper is still visible although the ceilings and walls (most likely plaster with horse hair) show some damage. The tower room is impressive and there are ten foot ceilings throughout the house. The banister on the stairway to the second floor is massive and is still beautiful. 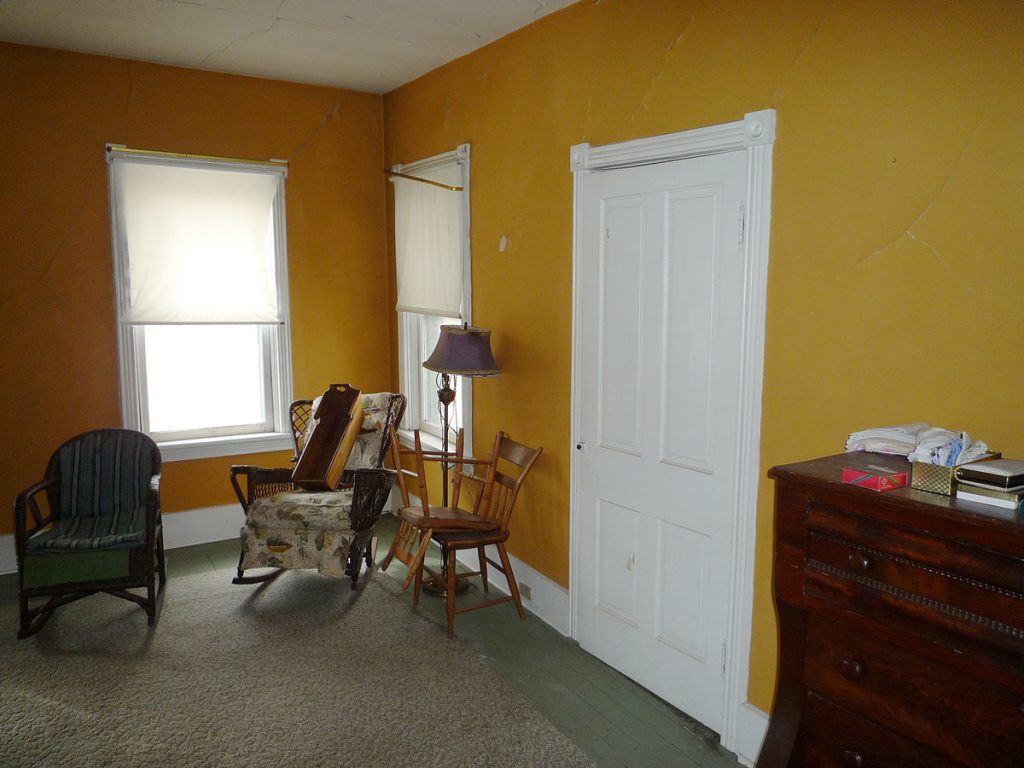 One of the bedrooms on the second floor of Hiram’s house—perhaps where he died in 1897.

The stairway is divided into two levels with a landing. The second floor also has the oak trim. Along with the tower room, there are three bedrooms and a bathroom that was modernized. A back stairway goes down to the kitchen. Two of the bedrooms are quite large, the third being smaller. An outside door on this floor looks out into a cistern system. 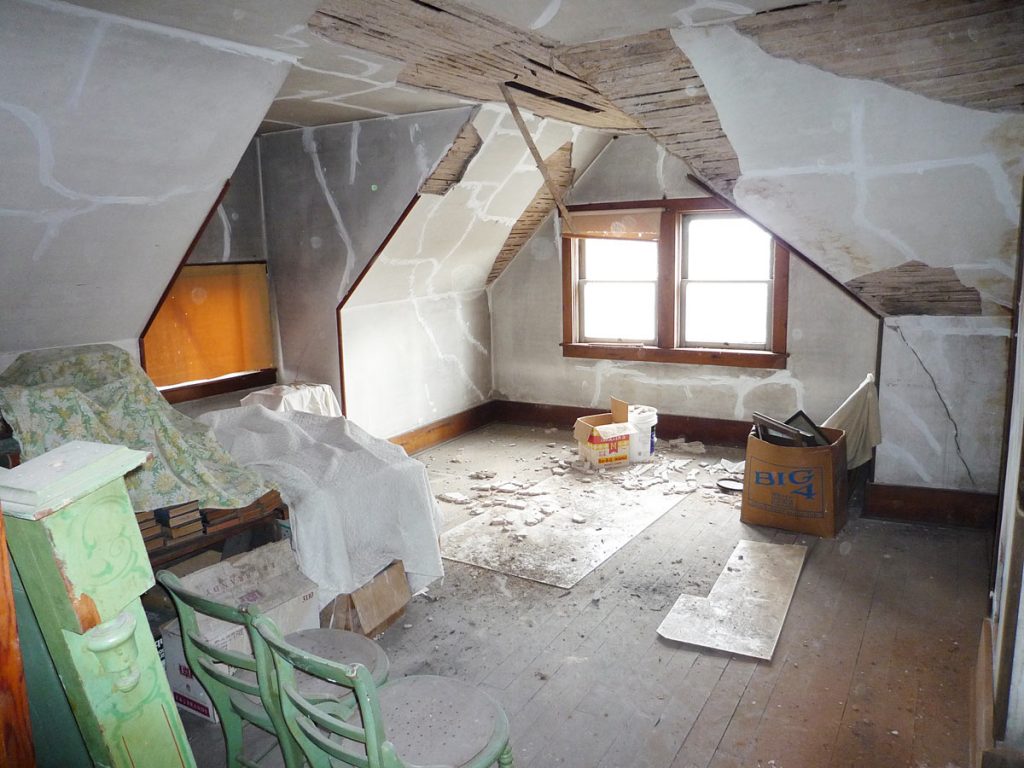 Bedroom on the third floor of Hiram’s house.

The third floor is trimmed with pine paneling and along with the third floor tower room, it also has three bedrooms. The house needed to be large to give space to the number of children that Hiram and Mary Ann had when they moved into it sometime in late 1896. I left the house that day anticipating when I could return with Andrew.

That day occurred on Saturday, March 16, 2019. I arrived at the house with Andrew, his wife Sara, my wife Linda, and my cousin, Leon. Once again I toured the house, this time with more eyes than just mine. We walked through, commenting on the size of the house and the layout of the rooms. 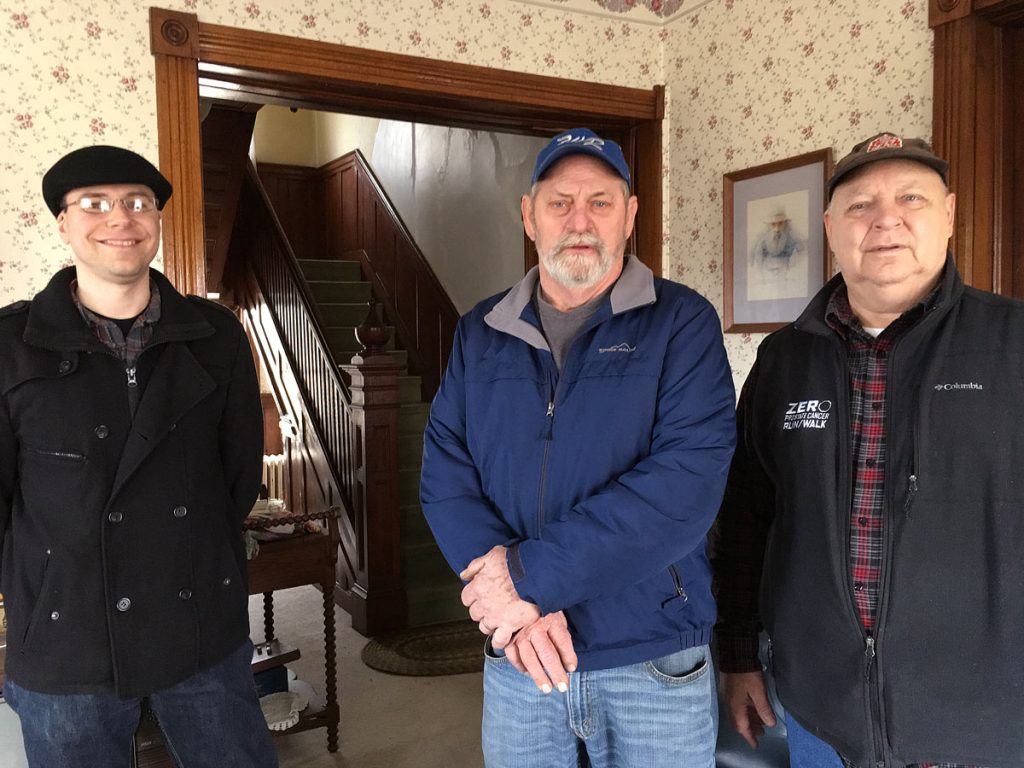 (L to R) Andrew, Leon, and Mark Hagenbuch stand in the parlor of Hiram’s house. The dining room is to the right and the front entrance is to the left. The tower room is straight ahead and to the left of the staircase.

Which room would have been Hiram and Mary Ann’s bedroom, most likely where Hiram breathed his last? Was the small room on the second floor the bedroom of the eldest son, Henry Bruce, who died just before his father, Hiram? It must have been quite the undertaking for the family to build such a house in 1896. And, it had to have been a terrible blow when Hiram and Henry Bruce died, resulting in the loss of the house several months later.

This time, along with the rooms that I had toured previously, I went into the basement. There, we found the original wooden bathtub now minus it’s copper lining. Steve Everitt told us that along with the tub, a clothes washer sitting in the back of the basement was original to the home. There were crocks and bottles on shelves, and other odds and ends littering the basement. Steve’s father was a collector of antique, so we don’t know which items might be original to the house and which were stored there by Steve’s now deceased father. 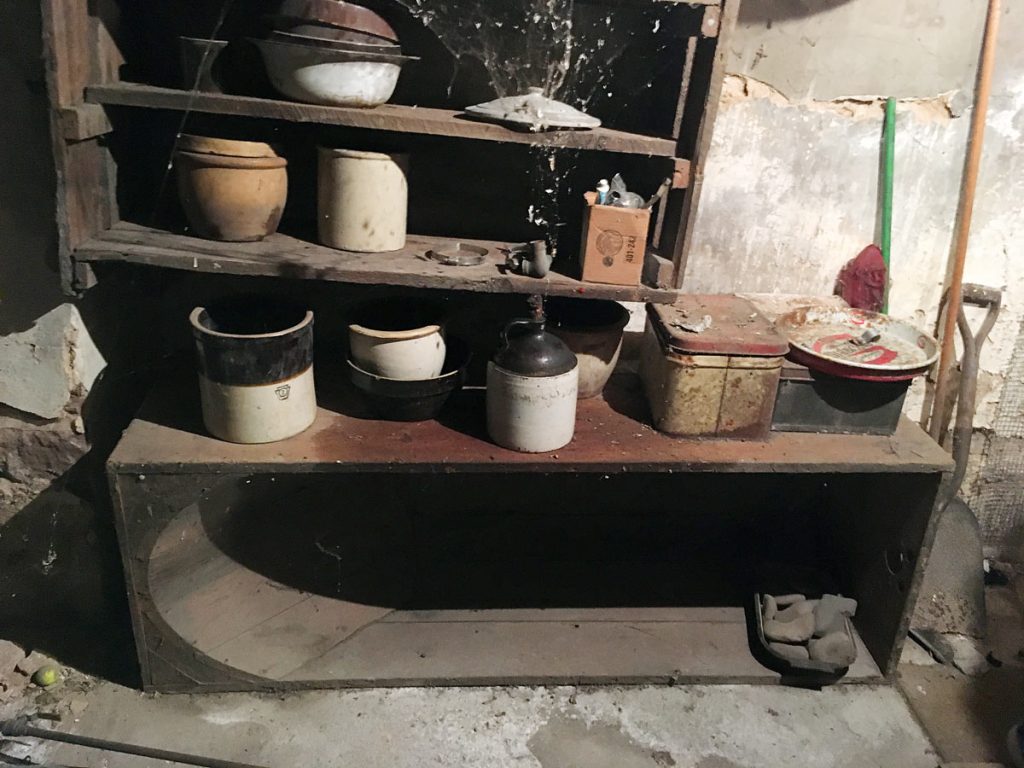 Basement of Hiram’s house with crocks and a wooden bathtub.

There is a lot of furniture in the house, but as with the basement odds and ends, one cannot know which pieces, if any, are original to the 1897 era. Many articles, boxes of items, and some furniture is from the mid-1900s when the Everitt family lived there. However, given its size and style, the large mirrored coat rack in the first floor tower room is most likely an original piece.

We spent over an hour in the house, taking photos and talking about all that we saw. The owner, Steve, is not sure what will happen to the house. He has thought about restoring it so it can once again be occupied. This would take a lot of work and would mean updating some of the interior. 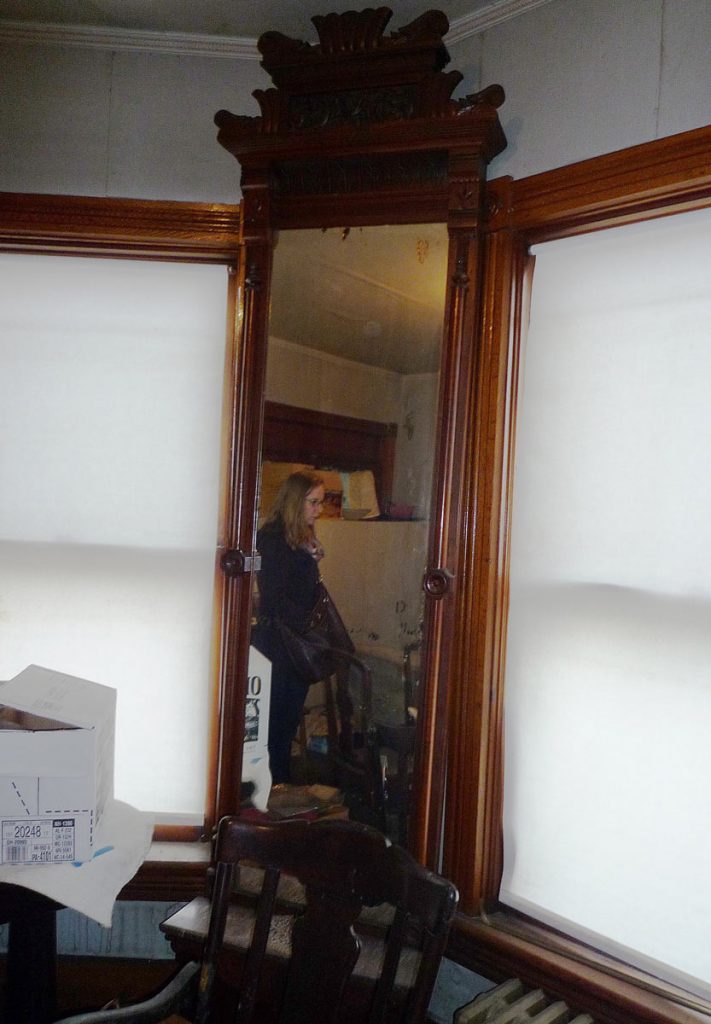 Mirrored coat rack in the tower room of Hiram’s house.

I have been fortunate to tour the house twice while it’s still in much of its original state. Steve has promised to keep in contact with me as decisions are made on the house, especially about the interior items (the bathtub, crocks, mirrored coat rack, etc.). We are also fortunate that the house is owned by a gentleman who understands the importance of preserving family history.