My Dinner With: Trooper James

Detail of a photo showing boiled beef, potatoes, and cabbage

When I started this series several weeks ago, my thought was to interest readers in questions that we have about our ancestors. Along with that would be a meal that I would share with certain ancestors which would provide a tactile sense to the conversation. As our readers probably know, the authors of this site, Andrew and me, are foodies. So, of course, it made sense that the meals would be an important element of each article. Like the food, the dinner venues also took on a life of their own. For example, when I dined with my great aunt and great uncle, the questions become overshadowed by the foods eaten and the description of the event where we met—the Oak Grove Church festival.

If you’ve been following past articles on James Hagenbuch, our paratrooper cousin who was killed on D-Day plus one in 1944, you know that Andrew and I were caught up in this man’s short-lived but very interesting life. Unlike the other dinners I have written about, James is not in our direct line of Hagenbuchs. Yes, we share a common ancestor, the patriarch Andreas Hagenbuch (b. 1715). However, Andrew and I are descended from Andreas’s son Michael (b. 1746) whereas James is descended from Andreas’s son Christian (b. 1747). That said, James has such a unique story that he is certainly one of the people at the top of my list whom I would want to break bread with. As Andrew wrote in his last article on James, we must never forget the people who were instrumental, not only in our family history, but also in the history of our country.

From the four articles that were written about James, we have a fairly good idea of what he went through after he joined the Army at the age of 19 in 1942. I had some questions for James about his earlier years to get a sense of his life before he went off to become a paratrooper in the Screaming Eagles. So, I have chosen to meet with him on the evening of December 8, 1941—the day after the attack on Pearl Harbor and the day he joined the Pennsylvania National Guard. James has just turned 19 a few weeks earlier, in November, and I envision going to his house at 501 East Centre Street in Mahanoy City, Pennsylvania. 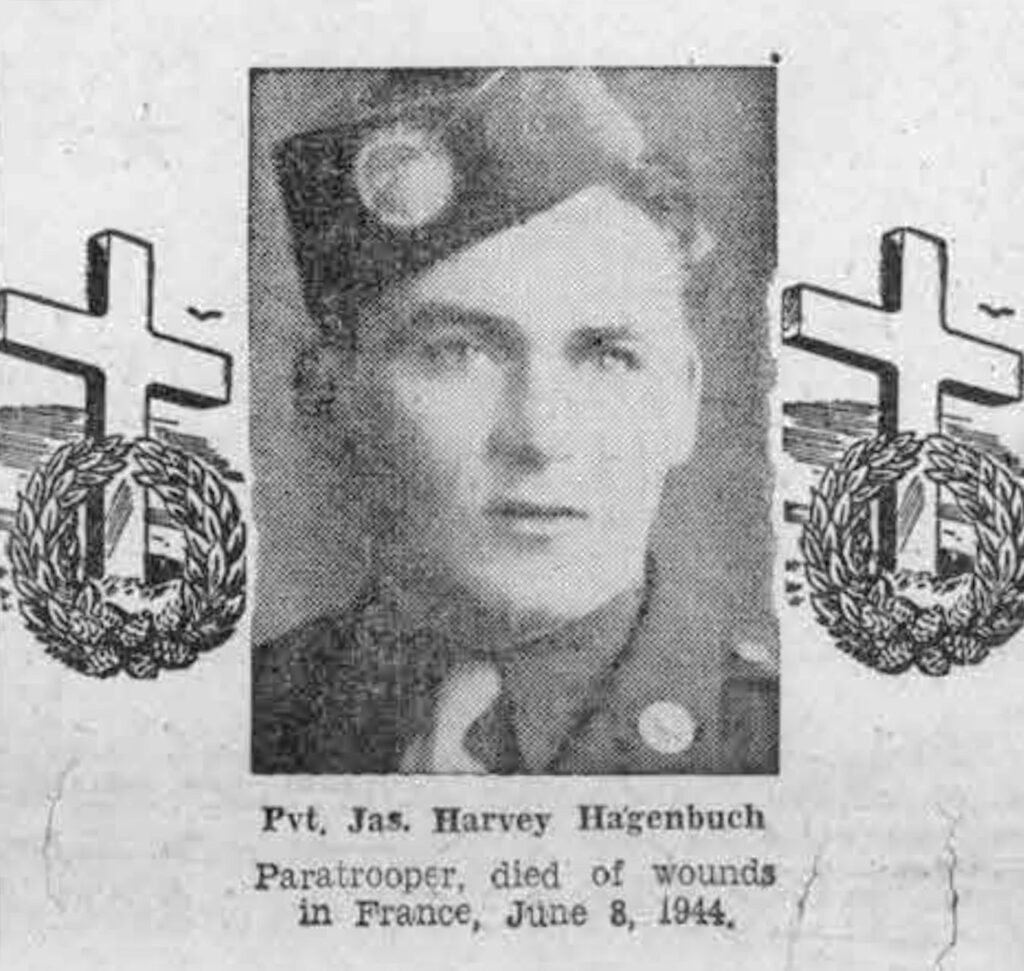 The door would be answered by Mary (Coyle) Mulvey, James’s grandmother. I remember what I learned about the family at this time. There were a lot of people living in this house, possibly Mary was making some extra money utilizing the home as a boarding house. Along with James we know that his younger brother, Joe, would be there and a few other relatives of the Mulvey and Coyle family. James’ and Joe’s mother, Alice, was probably working away from home and would not be present for my meal with the family. Unlike my Hagenbuch family that kept its Pennsylvania Dutch Lutheran traditions, James was raised by his Irish Catholic grandmother. Therefore, this home would be very different than the Hagenbuch family homes I am used to.

I was ushered into the dining room which had a crucifix on the wall in addition to Irish American memorabilia. I could hear a radio playing music in the background accompanied by brogue chatter between several people in other rooms. Immediately, I whiffed the smell of cooked food, and before anything else happened, Mrs. Mulvey put a platter of boiled beef, boiled cabbage, and boiled potatoes on the table. She was certainly gracious and hospitable, as she asked me to sit down. She opened a door to another room and shouted for “Jimmy and Joe.” In walked the young man I wanted to meet along with his brother, Joe, whom I was equally interested in seeing.

Jimmy was a short, scrappy looking young man with a big smile on his face. Joe was taller and slim, much more serious. We shook hands and were introduced to each other. No longer was it “James.” From now on, he was Jimmy Hagenbuch, my distant cousin whose life experiences were so different than mine and whose history I was aware of. It was a bittersweet meeting, as I was joyful to know this young man, but at the same time saddened to know what his end would be within a short two and half years. 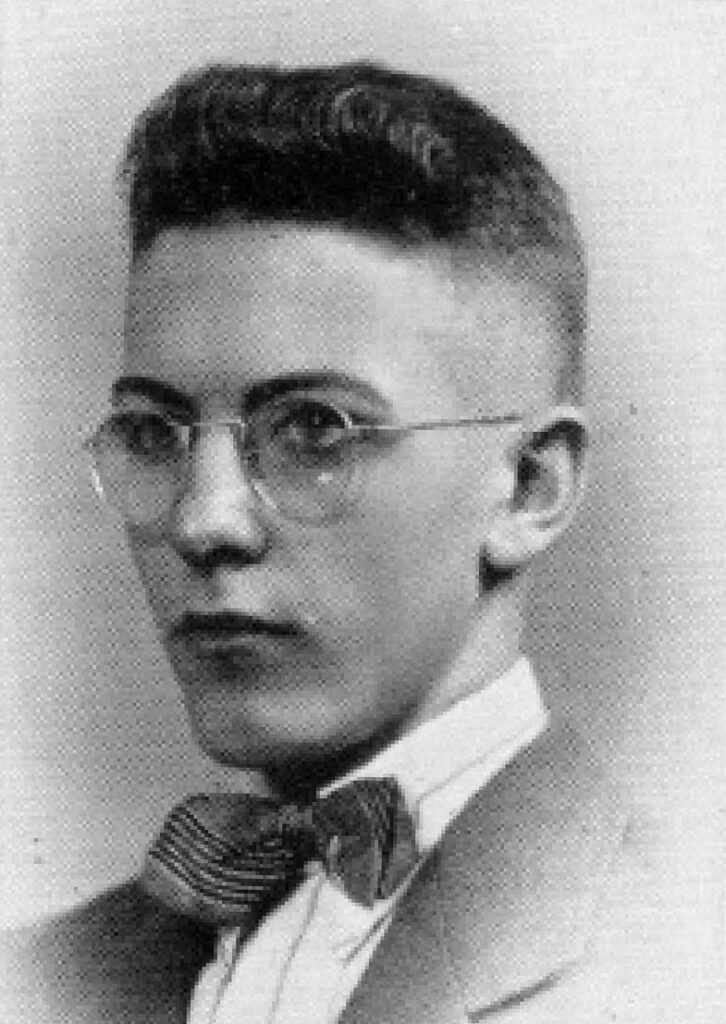 1943 yearbook photo of Joseph Hagenbuch with the caption “Joe is very serious; doesn’t like parties.”

We sat down, just the four of us, as grandmother Mary Mulvey wanted this to be an intimate meal without the chaos of the whole household. She said grace. Afterwards she, Jimmy and Joe made the sign of the cross and the food was served. It was delicious! Plain, simple, and tasty. It brought back memories of the two weeks I had spent on a tour of Ireland. Unlike previous visits with ancestors that had little or no conversation during the meal, while we ate this meal of beef, cabbage, and potatoes the questions and answers flew back and forth.

Jimmy was no longer in school. He told me he was soon heading to Philadelphia to live with his mother and work as a machinist in a manufacturing shop. Joe was a junior in high school. I could see the difference in their mannerisms. Jimmy was the outgoing jokester, gregarious, and probably one of those youths who was ready with his fists at a moment’s notice (but only when needed). Joe was bookish, quiet and serious, and already showing signs of his creative nature. Both young men were clean cut. Jimmy was especially fired up about the recent attack on Pearl Harbor, which was a main topic of conversation.

I could tell that Mrs. Mulvey wanted to keep the boys out of the military as long as possible. She made no mention of what had happened that day with Jimmy’s enlistment in the National Guard. I realized that either it was not to be spoken of or grandmother Mulvey did not know what Jimmy had done. I skirted the whole enlistment issue and, instead, I asked some questions about the brothers’ early years. Not much information was forthcoming. 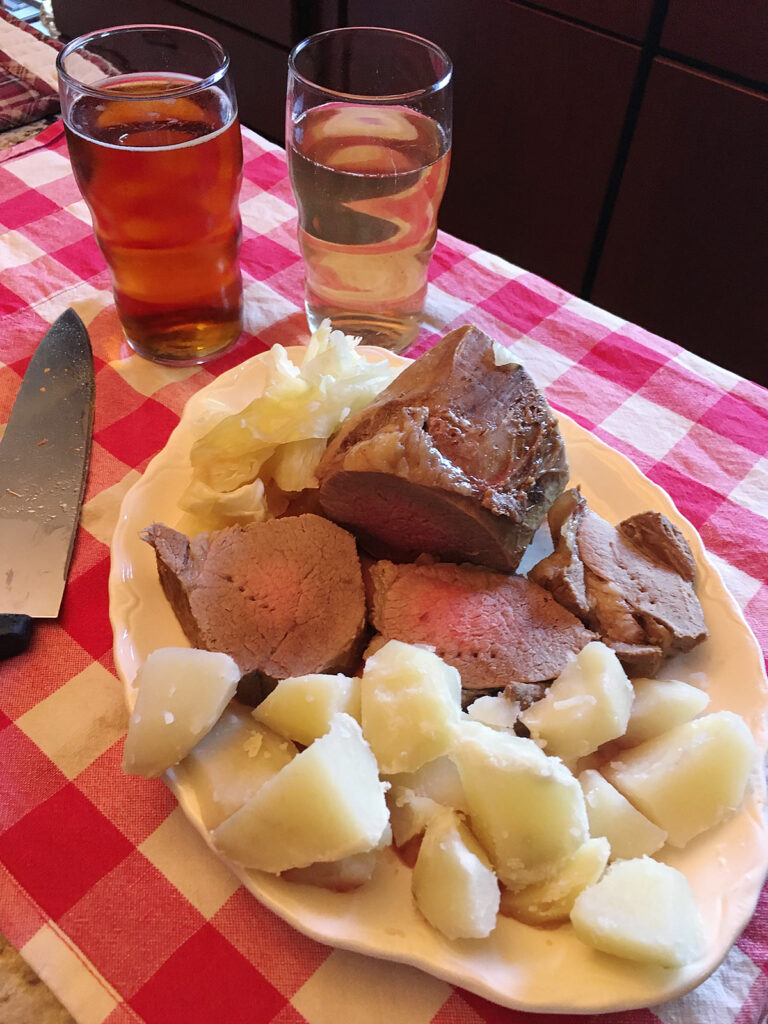 Platter with boiled beef, potatoes, and cabbage along with two glasses of beer

Jimmy and Joe might have had the last name of Hagenbuch, but they saw themselves as Mulveys and Coyles. They knew little about their Hagenbuch family history. Joe was only four when his father, Joseph, died so he had nothing to say about his Hagenbuch family. When Jimmy, who was two years older than Joe, would add a few words about the Hagenbuchs, Mrs. Mulvey would give him a glance that soon stopped even me from asking questions. I had always suspected that the German Lutheran Hagenbuch family and the Irish Catholic Mulvey/Coyne family were not in agreement with the marriage of the boys’ parents. However, it was enough just to be with this family and to get to know these two young Hagenbuchs.

The meal ended with a cup of tea (coffee was also offered) and some delicious cake. I pushed myself back from the table and reveled in the wisecracks of Jimmy along with the happy glint in his grandmother’s eyes. (She was fiercely proud of her two grandsons.) Jimmy offered to take me for a walk through Mahanoy City. Being December, it was cold outside so we donned our coats. I gave my thanks to Mrs. Mulvey and shook Joe’s hand as he went off to do schoolwork. Jimmy and I walked down the street in the chilly evening and I asked what he had in mind for the evening. I was told that we were going for a beer at his “watering hole,” the Mecca Bar at 36 East Centre Street, several blocks from their house.

Although Jimmy was still not of age to have a beer in public, upon entering the Mecca, I realized this was a common hangout for the young man. He was greeted by everyone in the Mecca which I recognized as one of those establishments in this area of Pennsylvania that was frequented by blue collar workers—a place of comradeship, stories, jokes, and once in a while a “donnybrook.” Jimmy was one of the live ones in the Mecca, and we each had a glass of beer set before us without even asking. Served in what I would term a “cafeteria glass,” common for that time period, the partially filled beer bottles were set to the side. It was the local Mahanoy City beer, Kaier’s, a light-colored beer quite different from the amber or dark beer that I enjoy in the 21st century. The history of Kaier’s is very interesting, especially since they continued to brew beer in Mahanoy City during Prohibition! 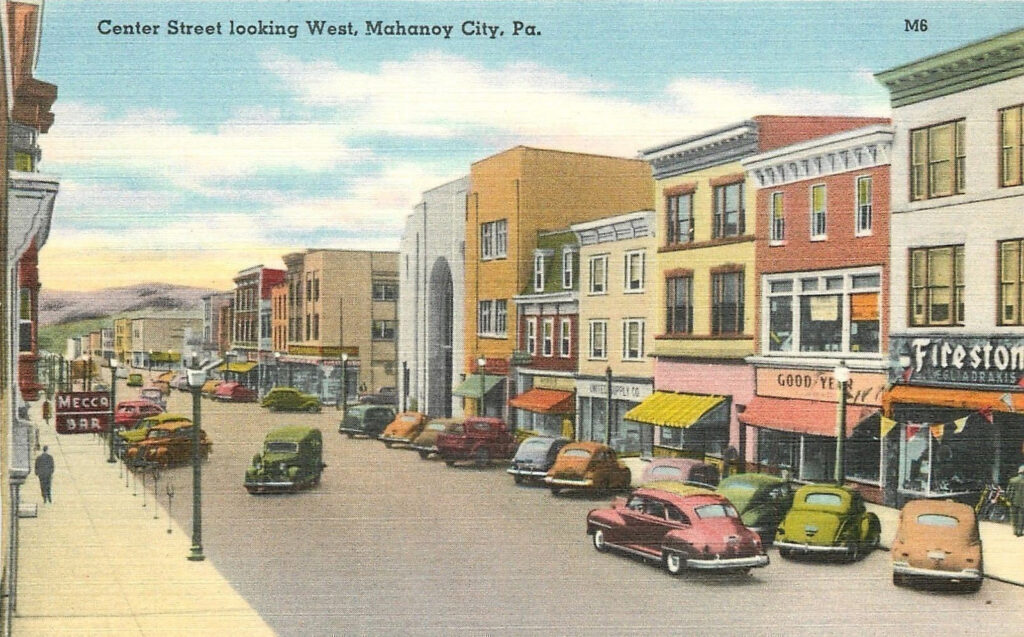 1940s view of the Mecca Bar sign (visible on the left) in Mahanoy City, Pennsylvania

Jimmy and I sat for a few hours in the smoke-filled Mecca Bar with his cronies, enjoying beer and conversation. Even more than at grandmother Mulvey’s home, the talk centered around who was “joining up” in the Army, Navy, and Marines. I was quiet as the backslapping, jokes, and sometimes hardened words were bantered back and forth, for I knew what was to come. Jimmy had introduced me to his friends as a cousin, but nothing was spoken about family history as this didn’t matter to the folks in the bar. The conversations were being driven by the present state of affairs, a sense of being American, and pride in their local connections. Once again, Jimmy made no mention of his enlistment that day in the National Guard. I expected he wanted to discuss this with his grandmother at the right time before letting the cat out of the bag to others.

We exited the bar about 10 PM and the night was even colder than before. I did not mention anything to Jimmy about his decision to “join up” that day and certainly could not let him know that I knew that by next year he would be part of an elite group of young men being trained to fight for their country. We shook hands and parted. As I watched cousin Jimmy, soon to be Trooper James, with his tousled hair and feisty spring to his step, walk down the street to his house, I thought how different we both were. I grew up as a farm boy with the influence of German Lutheran traditions, while Jimmy was raised in a coal town with the influence of his Irish Catholic traditions of his mother’s family. And yet, we both had American traditions that we believed in, a sense of belonging and wanting to accomplish something important for our communities and country. I only wish that I had really met Jimmy in real life.

Many thanks to Paul Coombe, historian at the Mahanoy City Historical Society, for his insights.