Detail of a photo of Bob, Lillian, and Norma Penman, 1952

Summer vacations have long been popular with American families—and the Hagenbuchs are no exception.

At the 75th Hagenbuch Reunion, I had the pleasure of chatting with Norma Kay (Penman) Hurter. Her grandfather is Andrew Pierce Hagenbuch (b. 1881). Norma Kay has a wonderful collection of family photographs, some of which she brought to the reunion. One group of pictures are from summer vacations her family took to Ocean City, New Jersey during the 1950s.

Ocean City wasn’t always a tourist destination. In fact, it only started to be developed during the 1880s, first as a spot for Christian camp meetings and later as a beach town. A boardwalk was built and expanded, adding businesses, food establishments, a music pier, games, amusement parks, and more. By the 1950s, Ocean City had a population of around 6,000 people, and its beach was a popular attraction with locals and vacationers alike.

During the summer of 1952, Norma Kay’s extended family rented an apartment in Ocean City, NJ for a week-long vacation. The group included her mother and brother, along with her grandparents, aunt, and cousins. In the first part in this series, Norma shares some pictures and memories from that trip, as well as one image from an earlier visit to Atlantic City, NJ in 1950. 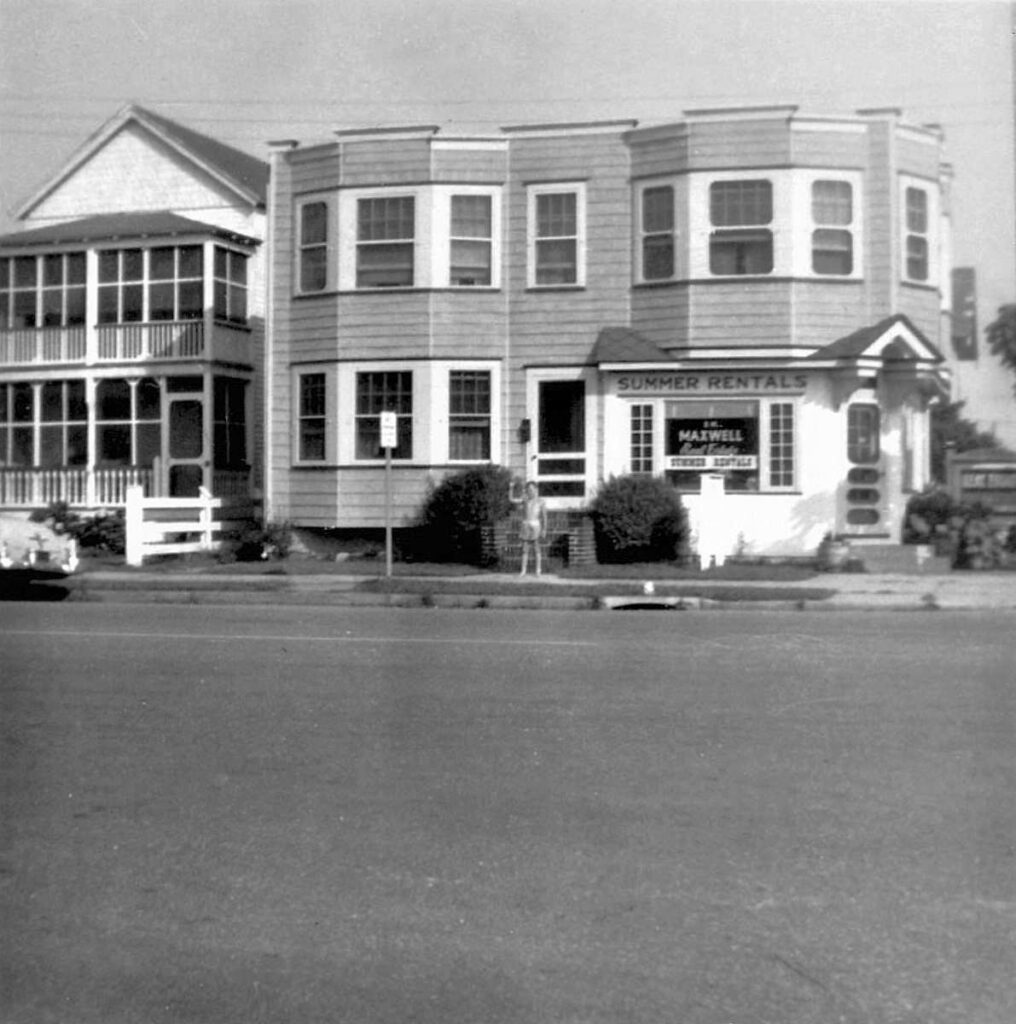 Rental where Norma Kay stayed with her family in Ocean City, New Jersey, 1952

In 1952, we rented an apartment in the Maxwell Realtors Building, visible in the above picture. Our first floor apartment was spacious enough with three bedrooms, and we all stayed together for the week. There was plenty of room for everyone. 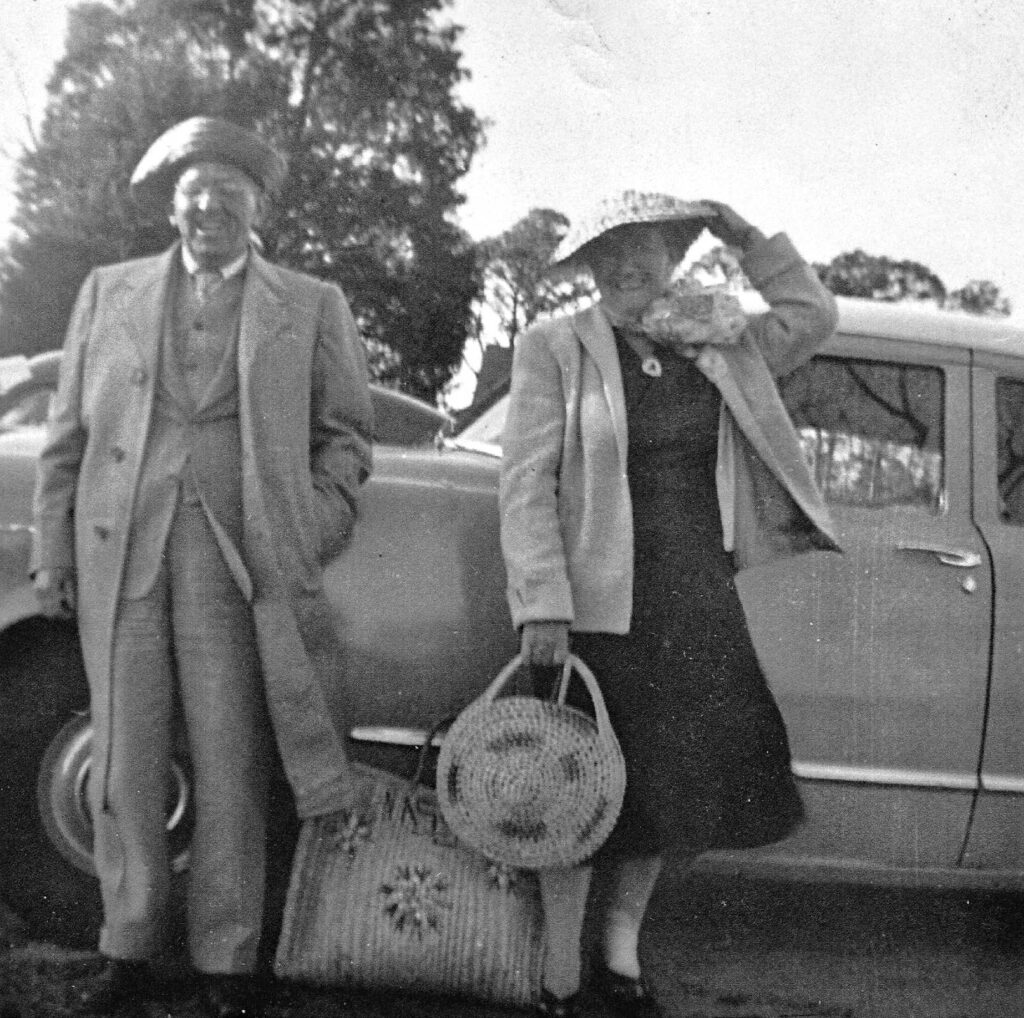 A. Pierce and Mary (Kirkendall) Hagenbuch, 1955

That said, I did find a photograph of our grandparents just after they returned from a trip to Nassau in the Bahamas during 1955. This image gives a sense of what they looked like in the 1950s. They are so happy in this photo. Grandma is really pleased with the bags she purchased on the trip! It was great fun to have them with us while we vacationed in Ocean City, NJ.

Every morning, we rented our bicycles and headed for the boardwalk—grownups and kids too. We’d come back to the apartment, eat lunch, and head for the beach. It was only a block or two away. I remember building castles in the sand with my brother and cousins. We had a great time riding the waves.

In the evening after supper, we would get a little dressed up and stroll to the boardwalk, where they had amusement park rides and games. We would enjoy ice cream cones and warm summer breezes. After an evening of riding all the rides, we’d head back to the apartment. There we had board games to play, which we would bring along. Our Grandmother loved to play Parcheesi. This was a time of togetherness that we cherished. 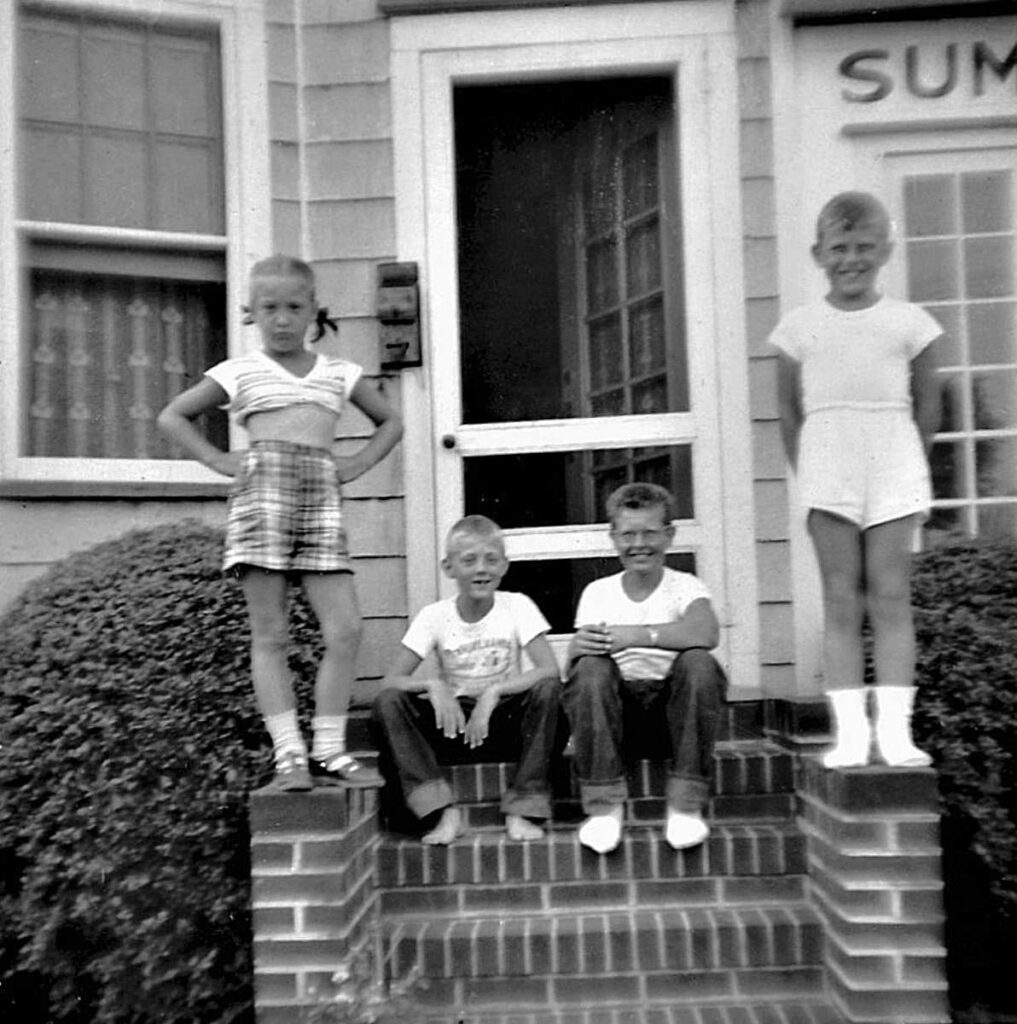 Here are the Hagenbuch kids that went to the shore in 1952. We are on the steps of the apartment building and were probably waiting for everyone to go to the boardwalk. Check out my attitude (I am on the left). I wasn’t waiting very patiently! 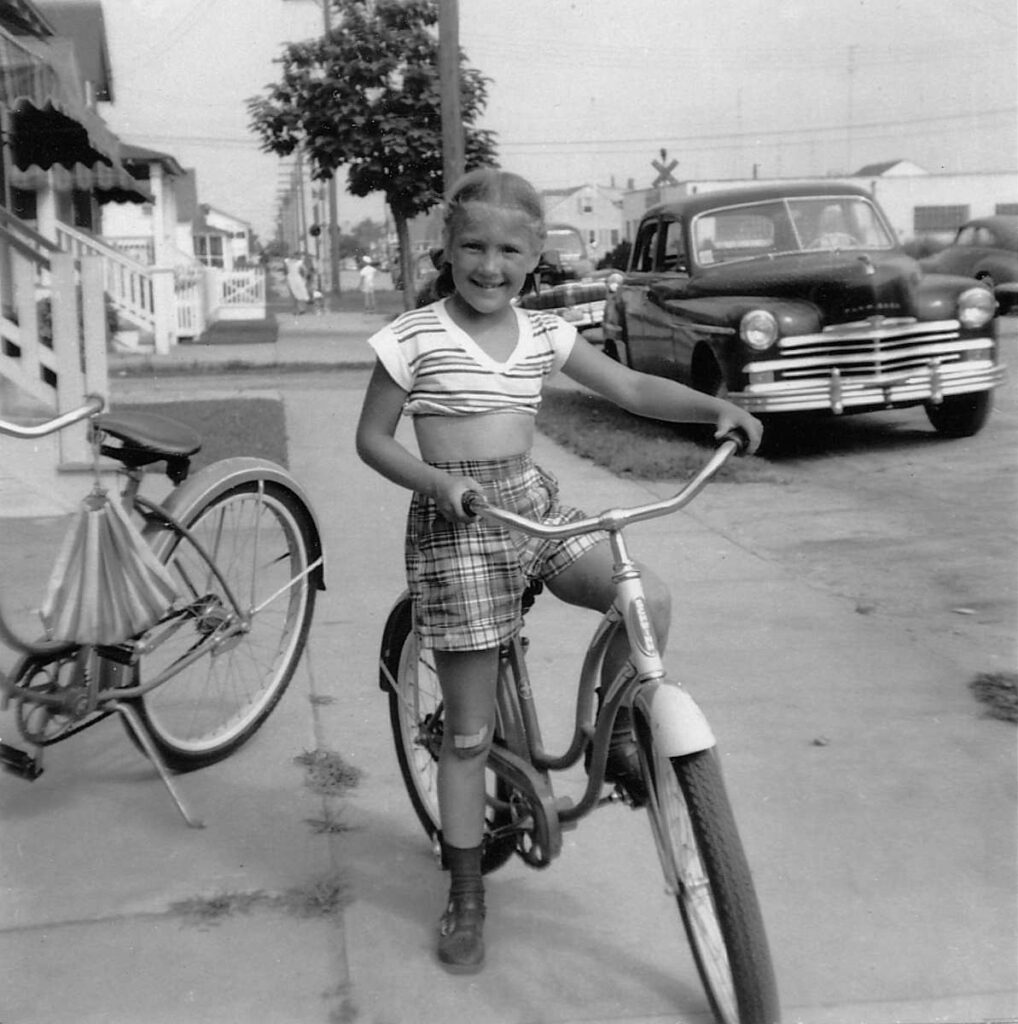 Here I am anticipating the fun we’ll have riding on the Ocean City boardwalk. I am impatiently waiting for everyone to get ready to leave. 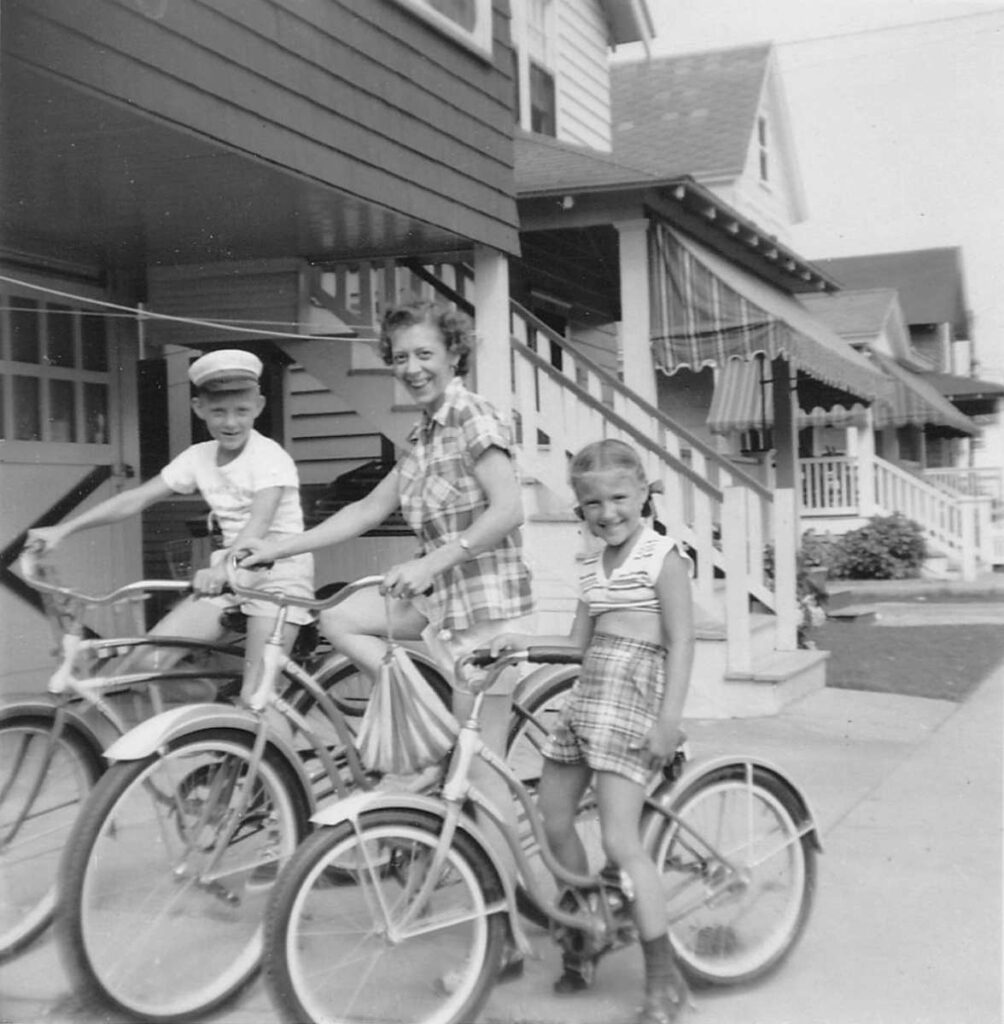 Bob, Lillian, and Norma Kay Penman on their bikes, 1952

This is my family coming back from the boardwalk and preparing to get ready for the rest of the day down on the beach. My brother Bob, my mother Lillian, and I are on our rented bicycles.

Bob and I had so much fun riding the waves to shore. When the waves were rough, it was even better because we would fall off the rafts and go under the waves, laughing and getting a mouth full of saltwater. Our mother, Lillian, would ride on the raft with me too, laughing so hard that we’d all fall off and go under together.

This photo appears to have been taken just north of the old 59th Street fishing pier, which was finally removed in 2015. 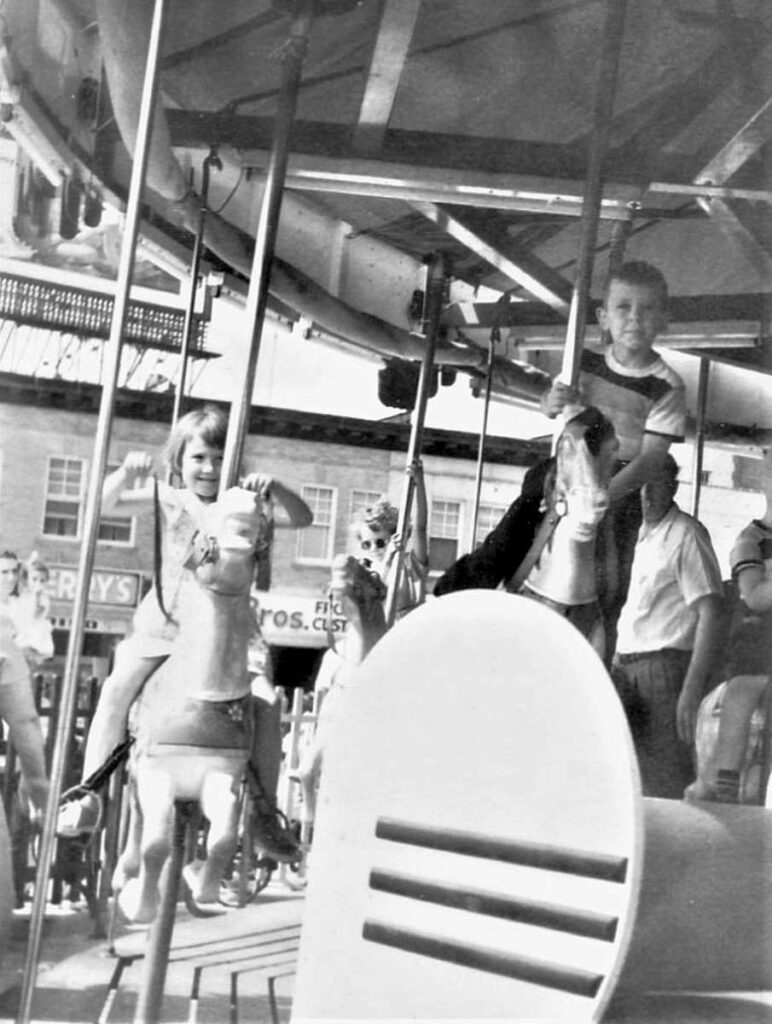 Norma Kay and Skip on a carousel at Atlantic City, 1950

This photo, which is one of my favorite memories, is of myself and my cousin Skip riding our horses on the carousel. It was taken in 1950, after my father, Norman C. Penman (b. 1914, d. 1950) had passed away in January of that year. He had suffered from a long illness involving an enlarged heart caused by rheumatic fever. My Aunt Kay and Uncle Harvey drove our family and theirs from Pottstown, PA to Atlantic City, NJ for the day.

I remember us seeing the horse jump from a high platform to a pool below—exciting at the time—but terrifying as I think about it today! The horse would ascend a ramp to a platform 40 feet above a deep pool. A rider would hop on the horse’s back and the pair would dive into the pool below. We also rode in a diving bell down under the water and went to see a show with the Mills Brothers, a popular singing group in the 1940s and 1950s.

In the next part in this series, Norma Kay will share more photos from a later trip that her family took to Ocean City, NJ during the 1950s.