The tradition of decorating an evergreen tree during the Christmas season is believed to have started in Germany during the 1500s. Our early Hagenbuch ancestors certainly knew and practiced this custom before coming to America in the 1700s.

Today, we decorate our Christmas trees with all sorts of different ornaments. However, some of these hold more significance than others and may spark memories or feelings each year we place them upon our trees. It was with this in mind that I asked several family members to send pictures and information about their favorite ornaments.

My aunt, Barb (Hagenbuch) Huffman, shared several ornaments. The first was a cat carved from wood that was made by her dear friend, Ruth, who passed away in the late 1990s. 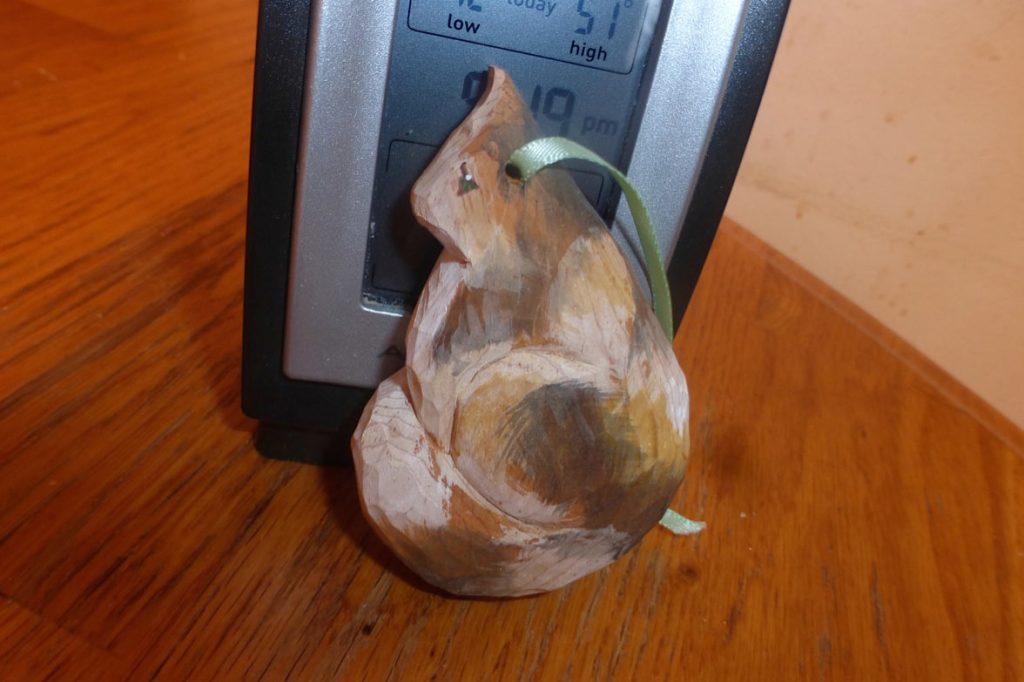 Another was of Santa Claus and had been owned by Aunt Barb’s mother, Irene (Faus) Hagenbuch. On the back is written “1939,” the year Irene married Homer Hagenbuch. The Santa is likely from the first Christmas they celebrated together as husband and wife. 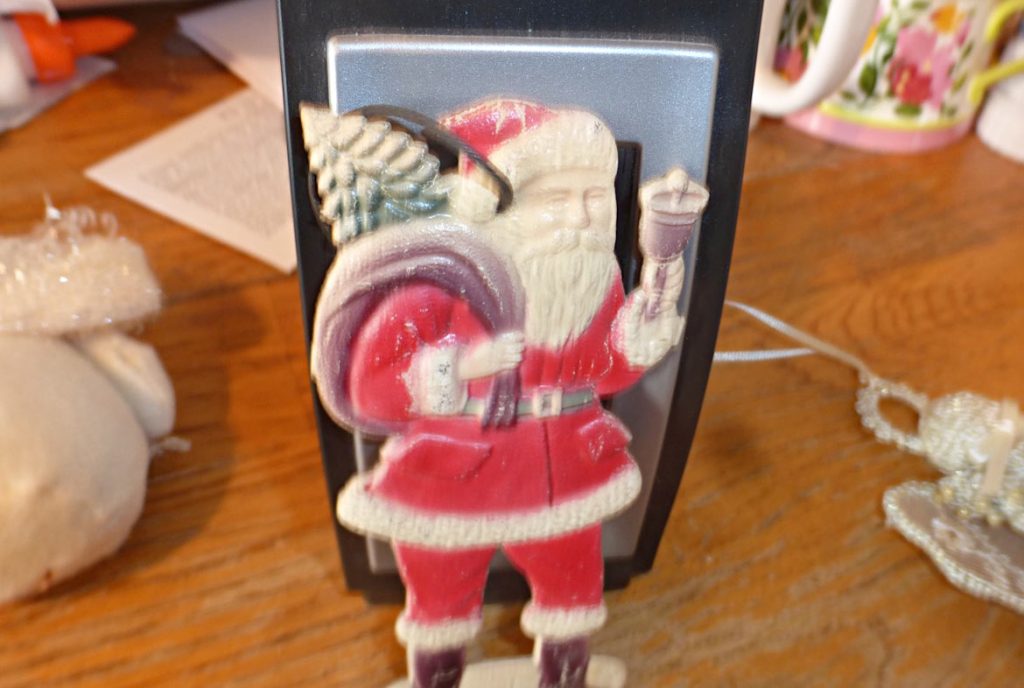 Next, my mother, Linda (Gutshall) Hagenbuch passed along several of her favorites. The first were beaded, silk-covered ornaments. Over the years she has bought a number of these. One group was made by the seller’s grandmother. Others, my mother made from kits or repaired if they were purchased at yard sales damaged. All of them are reminders of the love and care that go into making Christmas decorations. 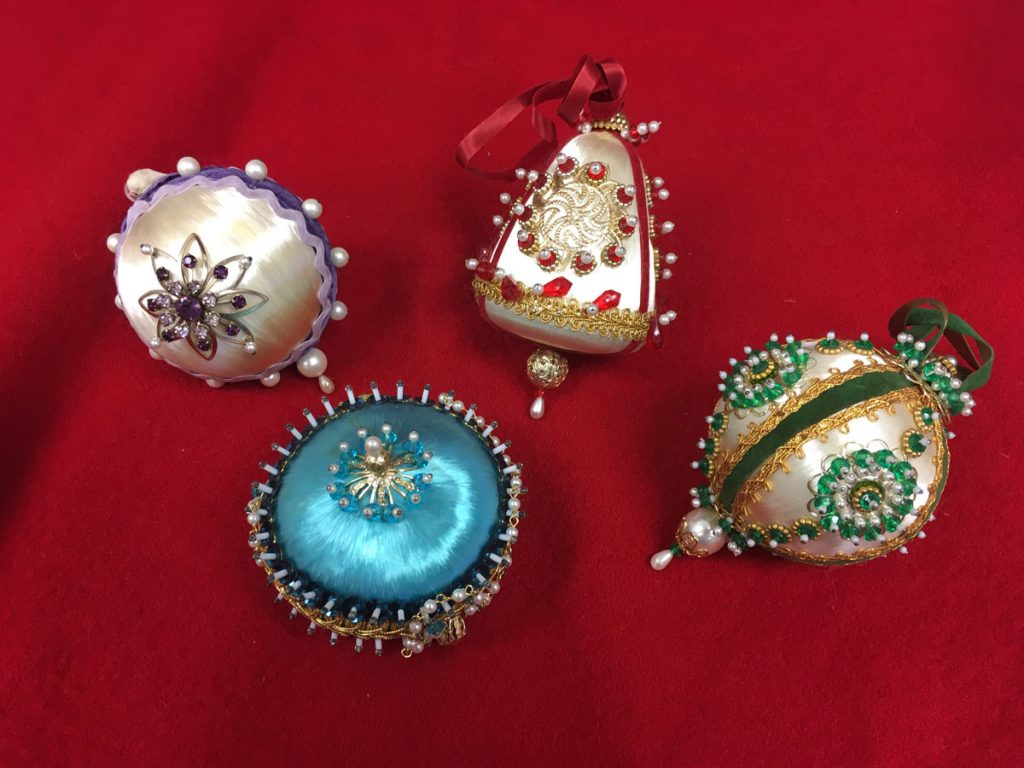 Beaded ornaments made with pins and silk

In a second set of ornaments, my mother selected three—each serving as a reminder of the years her children were born. 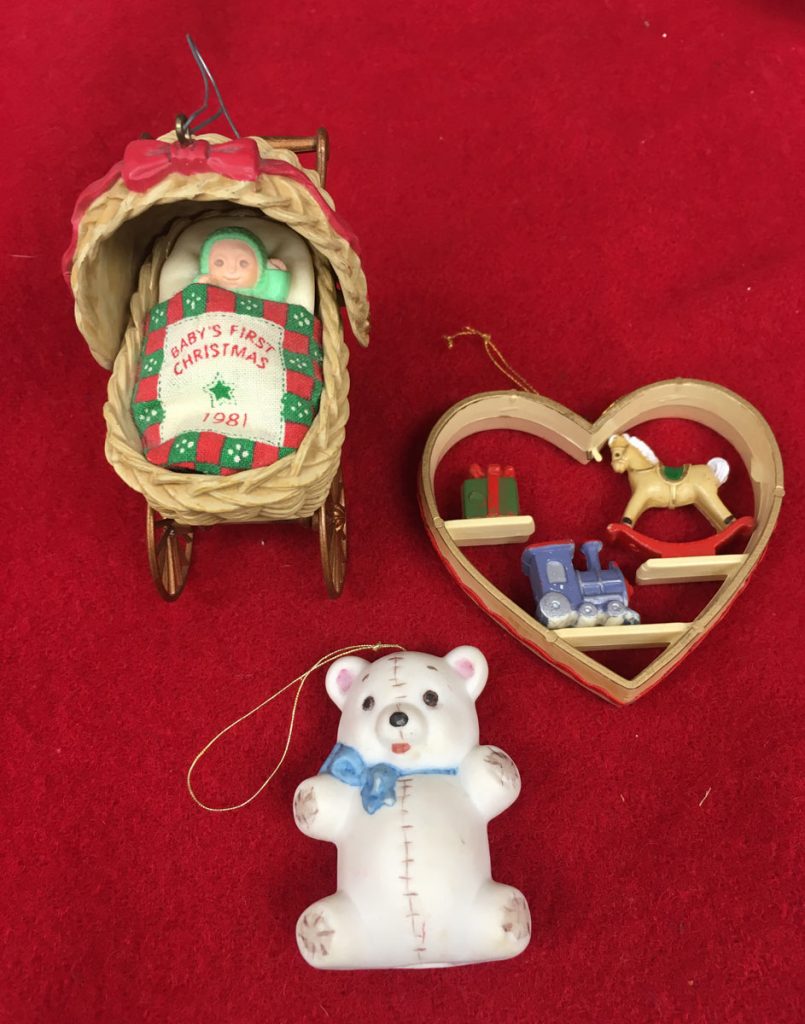 Ornaments from the years Linda Hagenbuch’s children were born

One final decoration my mother provided was a Santa Claus that had been her mother’s. Ethel (Brandt) Gutshall hung this ornament on her Christmas tree as a child. 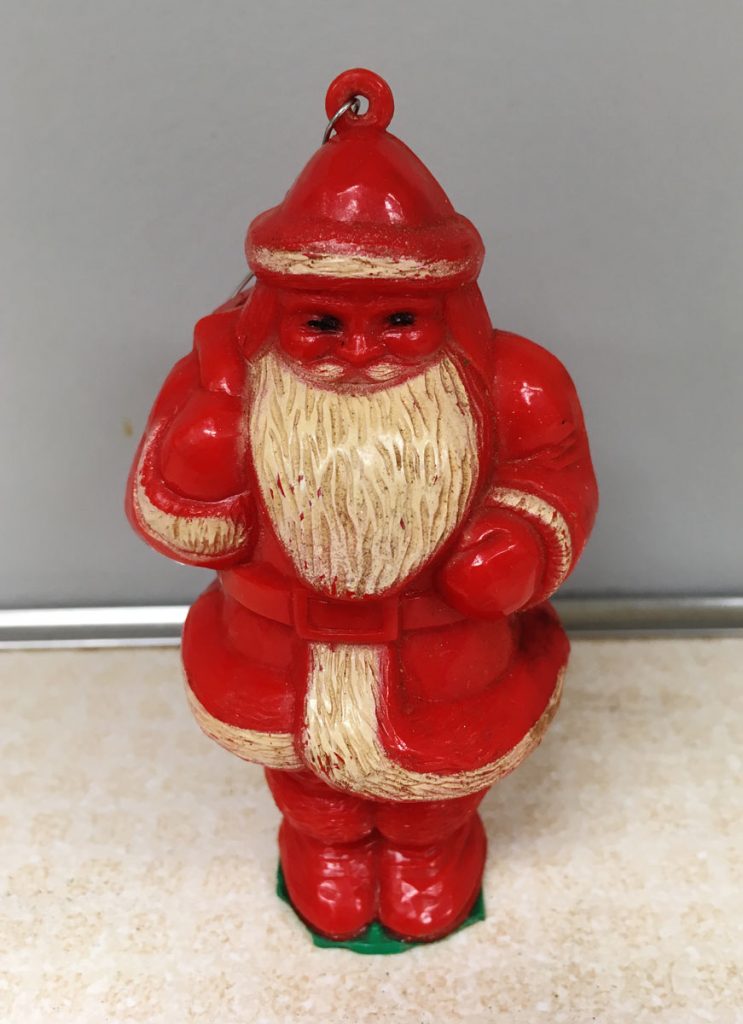 My father, Mark Hagenbuch, selected a few ornaments too. The first is a solider. According to my father, it looks similar to a nutcracker, which is a type of decoration he has always enjoyed having around. It is also a reminder of the historical reenacting that has been a part of his life for many decades. 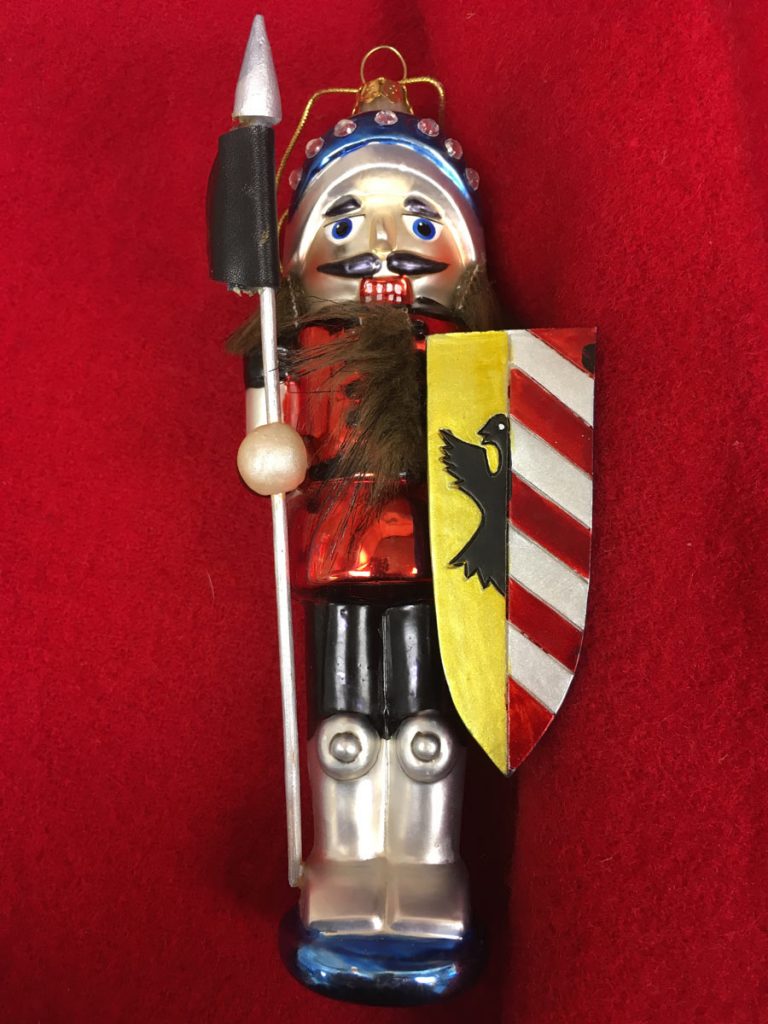 Solider ornament that resembles a nutcracker

My father picked out a few Santa Claus ornaments as well. These reminded him of a cardboard Santa that his family used to hang on the tree when he was young. This decoration, along with the creche his mother set out each year, are two of his most important Christmastime memories.

Interestingly, while writing of this piece, my father told me that that the cardboard Santa of his youth had been lost. What a surprise it was for him to see a picture of the ornament in this very article! Here, his sister, Barb, had saved it and submitted it as one of her favorite decorations. My father’s “cardboard Santa” and my Aunt Barb’s “1939 Santa” ended up being one and the same. 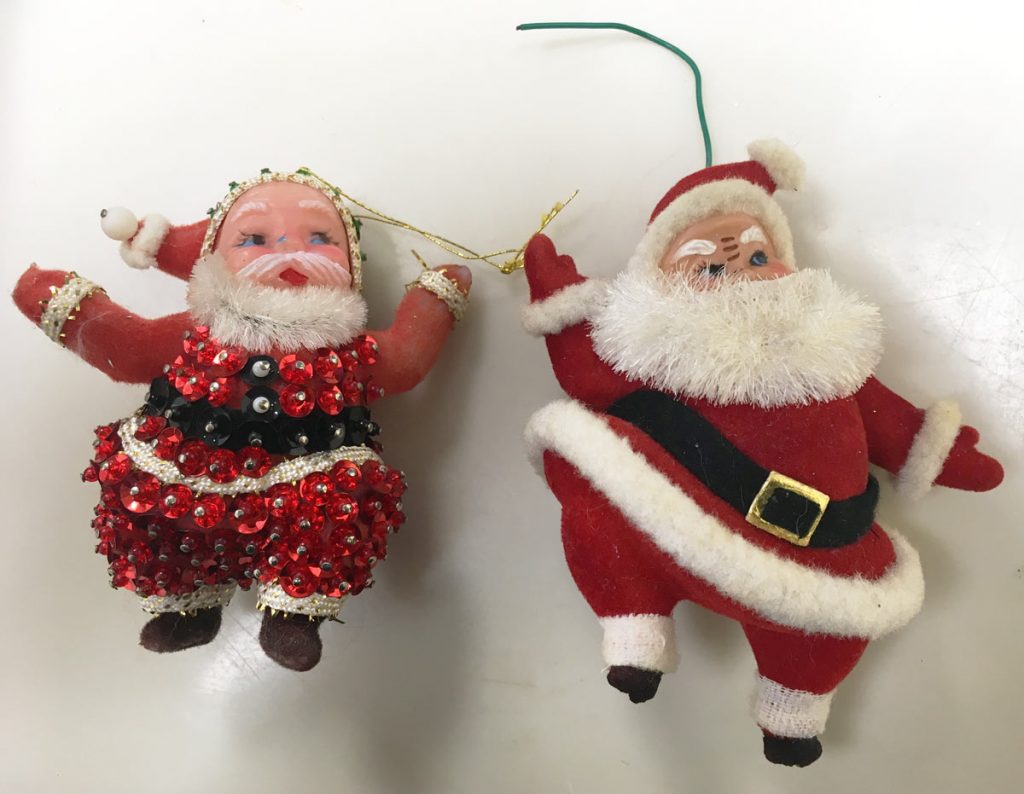 Marge (Tkacz) Mowery, my mother-in-law, selected one of her favorite ornaments to share too. For decades, this unique porcelain angel, with its grace and beauty, has brought her joy each year when she places it on the family tree and admires it during the Christmas season. 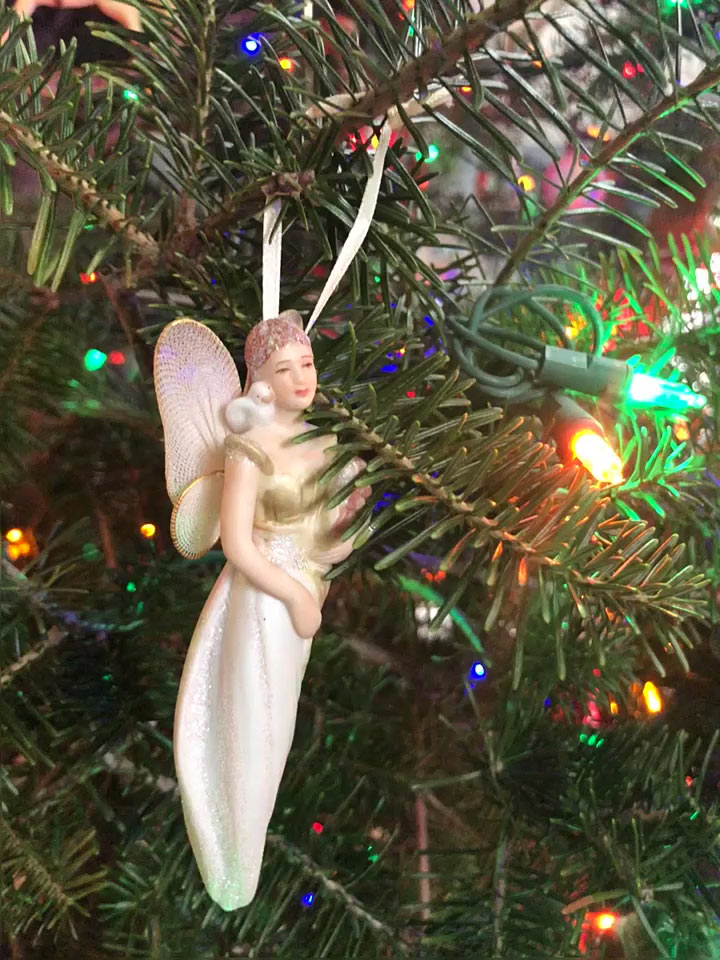 My wife, Sara, contributed an ornament that she enjoys. This Ghost of Christmas Past decoration was given to her as part of a set by her grandmother, Joyce (Grincavage) Mowery. It reminds her of the family tradition of watching A Christmas Carol each Christmas Eve. 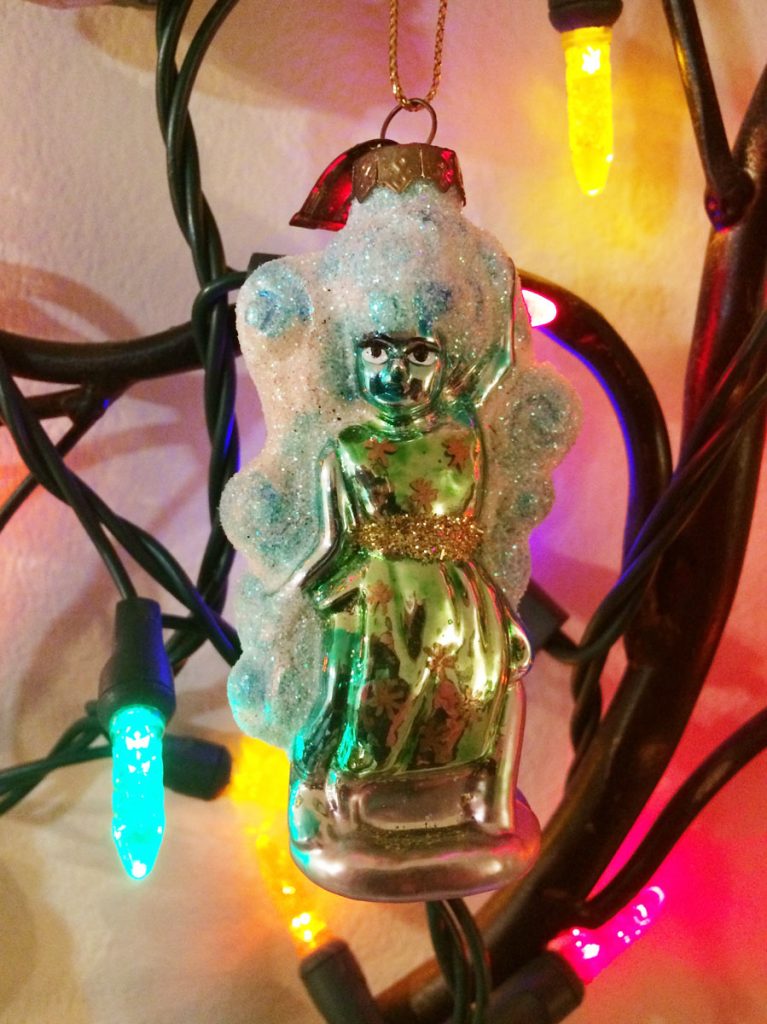 Ghost of Christmas Past ornament

And, finally, here are two of my favorite ornaments. The one on the left is a cinnamon stick Santa Claus I made as a child and which still has my name tag on it. The one on the right is a candy cane reindeer called Harry-Helps-A-Lot, his name being a reminder to always be helpful at Christmastime. (There is a much longer family story here!) Both decorations remind me of the homemade foods and crafts we enjoy during the holidays. 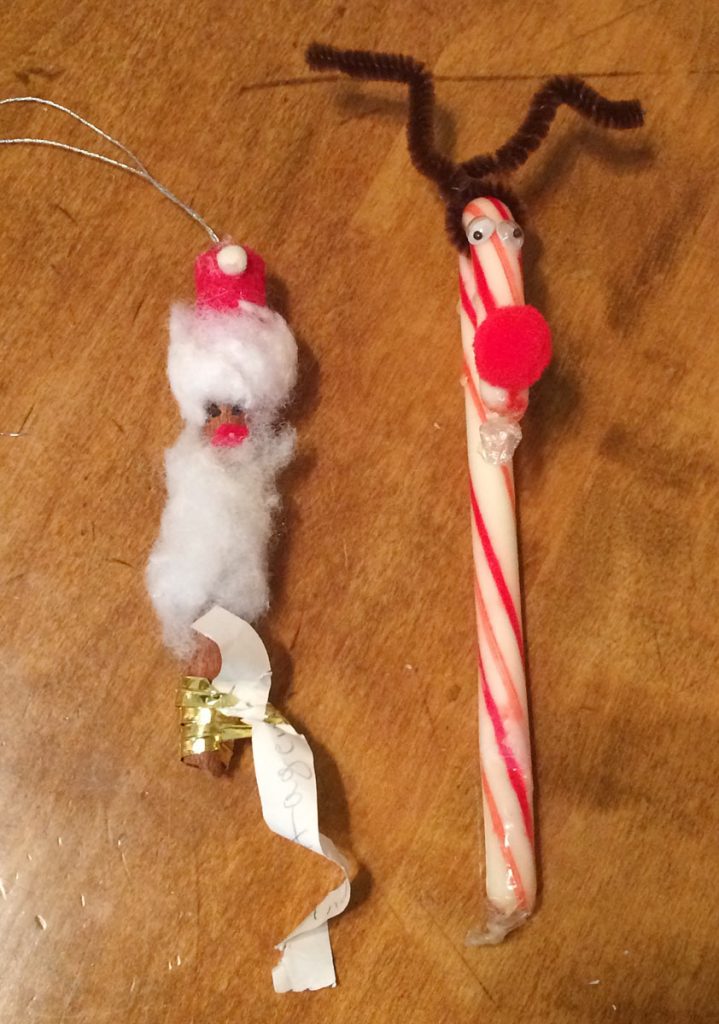 Working on this article, I was struck by the number of family members who selected a Santa Claus ornament. Often times, this was because the Santa was connected with childhood, either their own or a loved one’s.

On this day, Christmas 2018, take a moment and consider your own favorite ornaments and decorations. What significance do these hold for you and what memories or feelings have you attached to them?

Merry Christmas to you and your family from the Hagenbuchs!